Best Things to Do in Mactan Cebu: Historical and Island Tours 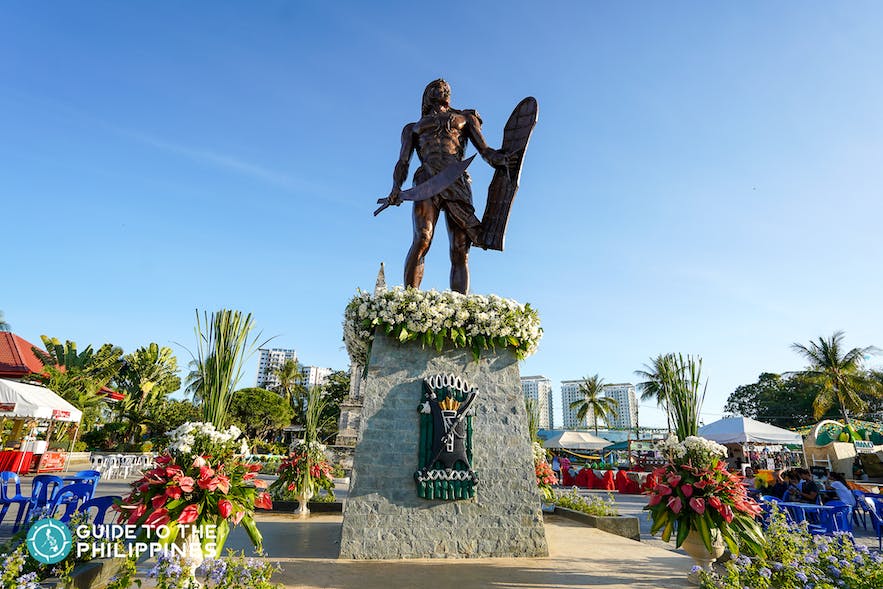 If you’re looking for a tropical island destination that still has the comforts of the city, head to Mactan Island in Cebu. Find the best tourist spots and activities to do there by reading this article.

Mactan Island is a little island in the heart of Central Visayas in the Philippines. Located beside the main island of Cebu Province, Mactan has become one of the top tourist destinations in the country.

Read on to discover the cultural heritage, natural attractions, and other things to do in Mactan!

1. Go on an Eco-Adventure at Olango Island 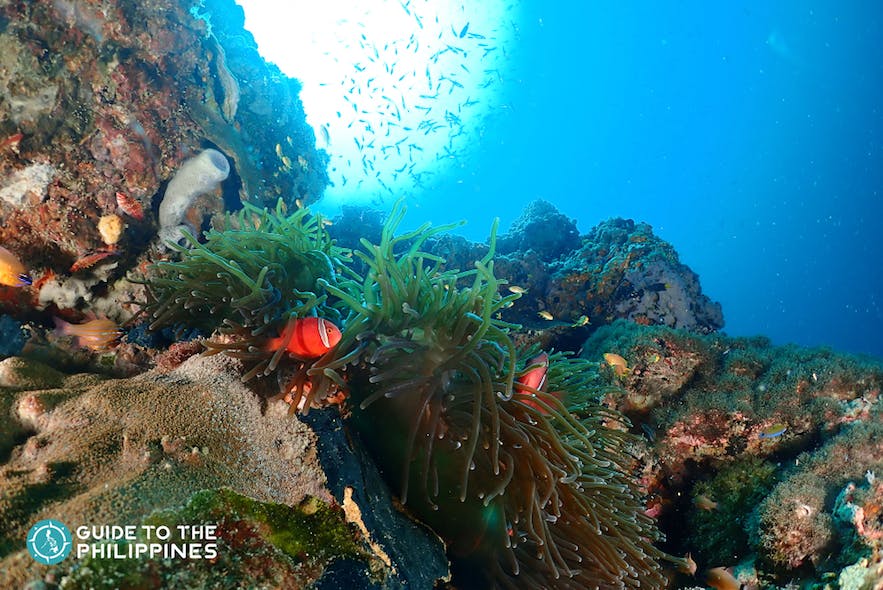 Olango is a 4,482-hectare protected island blessed with a diverse coastal ecosystem; it has an immense sandy beach, coral reefs, and a mangrove forest that is considered as the most extensive in the whole Cebu Province.

It’s a natural paradise and one that would make every nature lover’s heart skip a beat.

Aside from its coastal treasures, Olango Island is also a declared bird sanctuary. If you visit during November to February, you can go birdwatching here where you will witness 97 species of migratory birds flocking to the island.

Or you can explore the island and observe its wildlife on a kayak or a bike. It’s your choice. Either way, Olango Island will fill your senses with the beauty of nature. 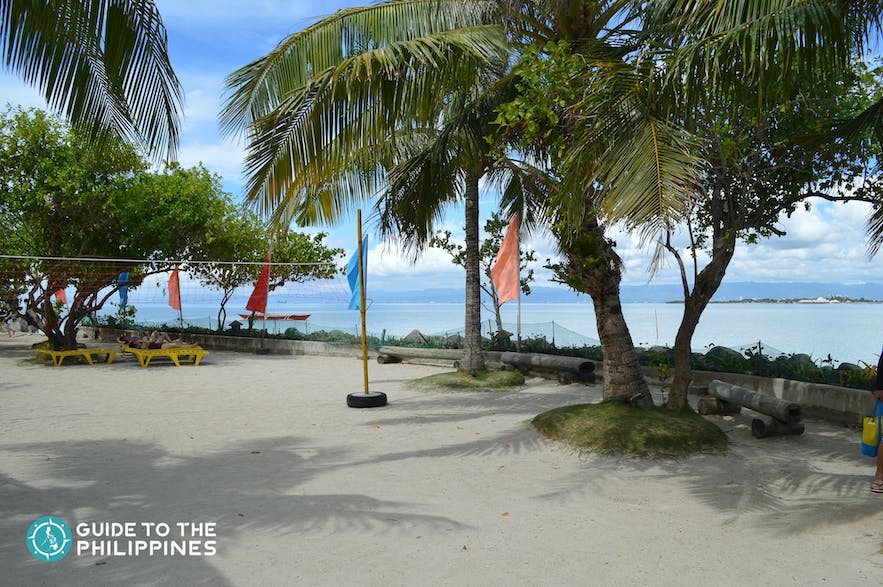 Nalusuan Island was originally a mere sand bar in the Cebu Strait, nestled between the island of Bohol and Mactan. It was later developed into the Nalusuan Island Resort and maintained as a fish sanctuary to protect its vibrant underwater ecosystem.

Now, the island is a thriving tourist destination for beach bumming and swimming with the fishes and occasional turtles.

The resort also offers various water activities such as snorkeling, scuba diving, kayaking, and other motorized aqua sports. So, knock yourself out!

A trip to Mactan would not be complete without a tour of the Mactan Shrine. The shrine was built in 1866 to commemorate the Battle of Mactan and honor Lapu-Lapu and Magellan with their respective monuments. 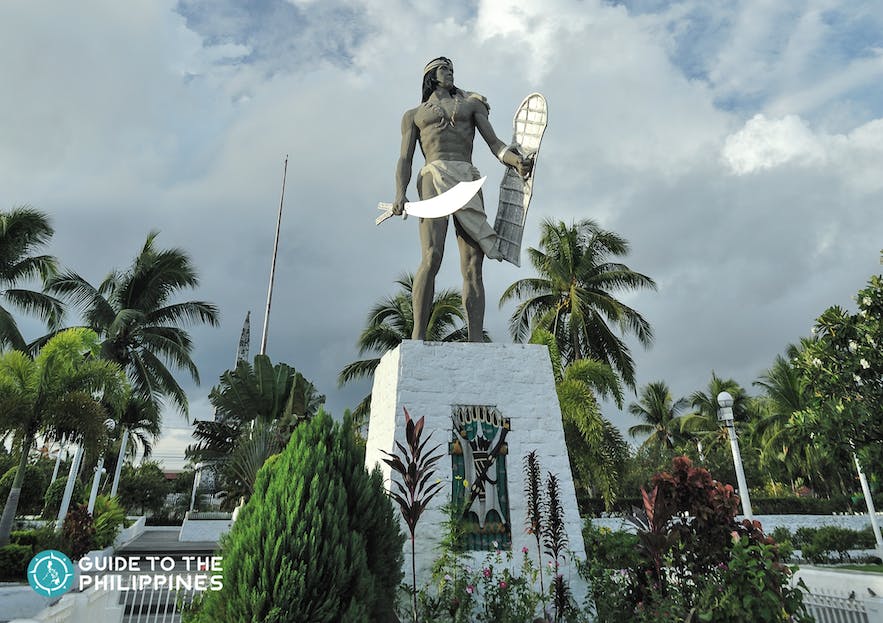 Lapu-Lapu Monument is a majestic 20-meter bronze statue of the hero armed with a kampilan (a native sword) and a shield. It is erected to honor the bravery of the Datu on the very ground the battle was believed to have taken place.

The Magellan Monument, on the other hand, is a large obelisk dedicated to the Portuguese explorer who brought Christianity to the Philippines.

The shrine is open to the public, so don’t forget to stop by and marvel at the towering structures and their significance to Philippine history.

Also prominently displayed at the shrine is a sprawling painting depicting the Battle of Mactan. Truly, there is no better place to learn about the rich history of Mactan than at the Mactan Shrine.

Mactan Shrine is located by the shore of Punta Engaño in Lapu-Lapu City. You can get there by taxicab, or by hopping on a jeepney with Route Code 23 from Marina Mall. You can also join a day tour in Mactan.

4. Feast on Seafood at Pandanon Island 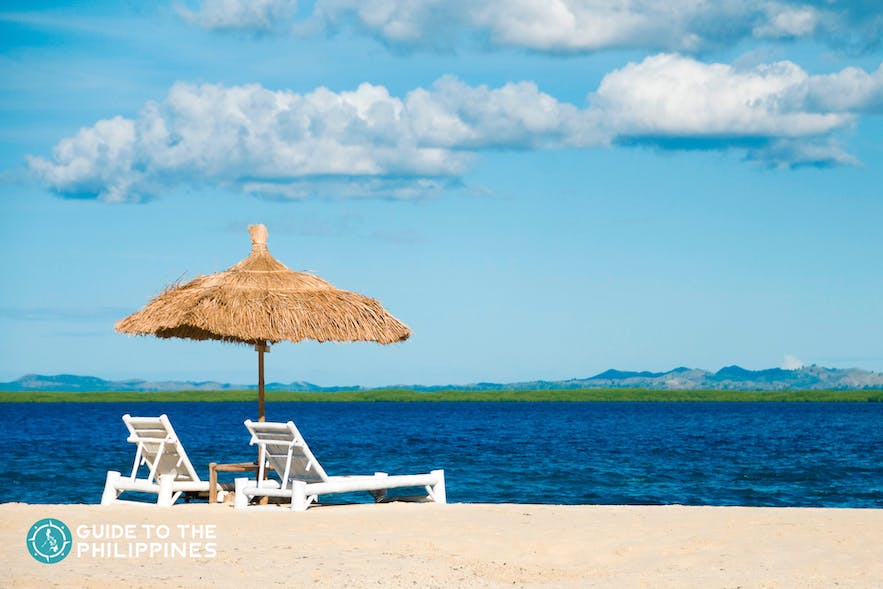 ​Technically part of the Bohol Province, Pandanon Island is the farthest island-hopping destination from Mactan.

Pandanon Island boasts a white sand bar and stunning blue-green waters that you simply can’t resist but to take the plunge!

There is a small resort that maintains Pandanon and rents out cottages for visitors, as well as a thriving fishing community on the island.

You can buy affordable fresh seafood from local fishermen and have a grilled seafood feast by the beach! It is a great spot to have your island-hopping lunch break.

Caohagan is a small inhabited island that is an hour and 15 minutes away from the shores of Maribago. The island boasts lush tropical greenery with a white sand beach that’s lined with cottages.

It is surrounded by sparkling crystal-clear waters that are great for a leisurely swim. If you’re up for more underwater adventures, the east side of Caohagan island is a good spot for snorkeling!

Being an island, you can expect the freshest seafood in any Mactan restaurant. But more than that, Mactan also offers unique local culinary treats and the native Filipino dishes that will make you want to ask for seconds.

SuTuKil is a unique Mactan dining experience; you won’t find it anywhere else! The name SuTuKil is a combination of 3 Bisaya words, Sugba (Grill) + Tuwa (broth) + Kilaw (Raw, similar to ceviche). 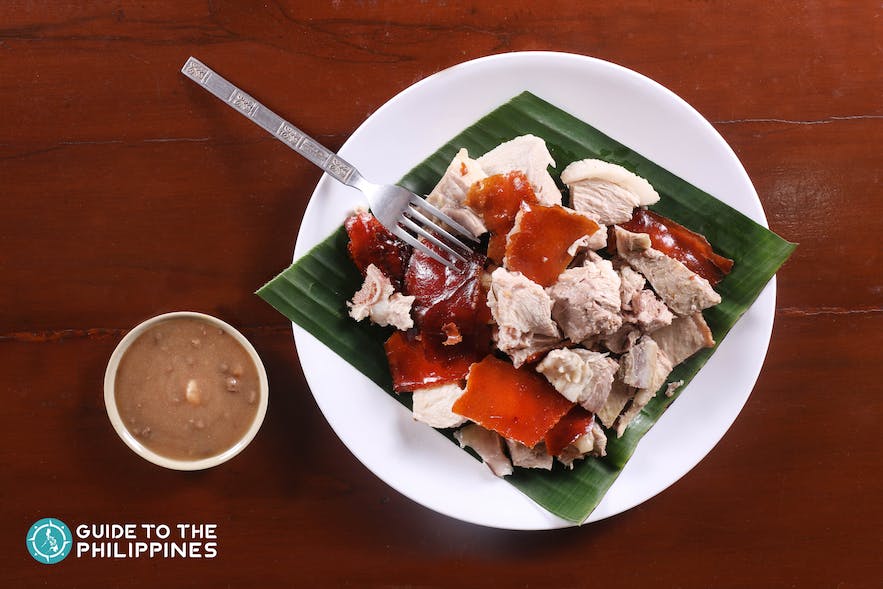 Lechon is the culinary pride of Cebu. If you’re visiting the province, don’t pass up the opportunity to sink your teeth into this ultimate pork dish.

Imagine savory golden crispy pork skin, the juiciest meat seasoned with traditional herbs and spices, and a layer of fat that just melts into your mouth. That’s lechon! The best one can be found at Rico’s Lechon.

The bakasi or saltwater eel is Mactan’s top exotic offering. It was already a popular local delicacy in the town of Cordova, where these eels are abundant.

But Cordova’s Bakasi was catapulted into to even greater fame when Entoy’s Bakasihan was featured in Netflix’s Street Food episode on Cebu Province.

Entoy’s Bakasihan is not a fancy establishment. But it is very famous for its Linarang Bakasi which is eel sautéed in soy sauce, black beans and tamarind.

Like Nalusuan Island, Hilutungan Island is also a fish sanctuary and a beautiful snorkeling and diving spot. 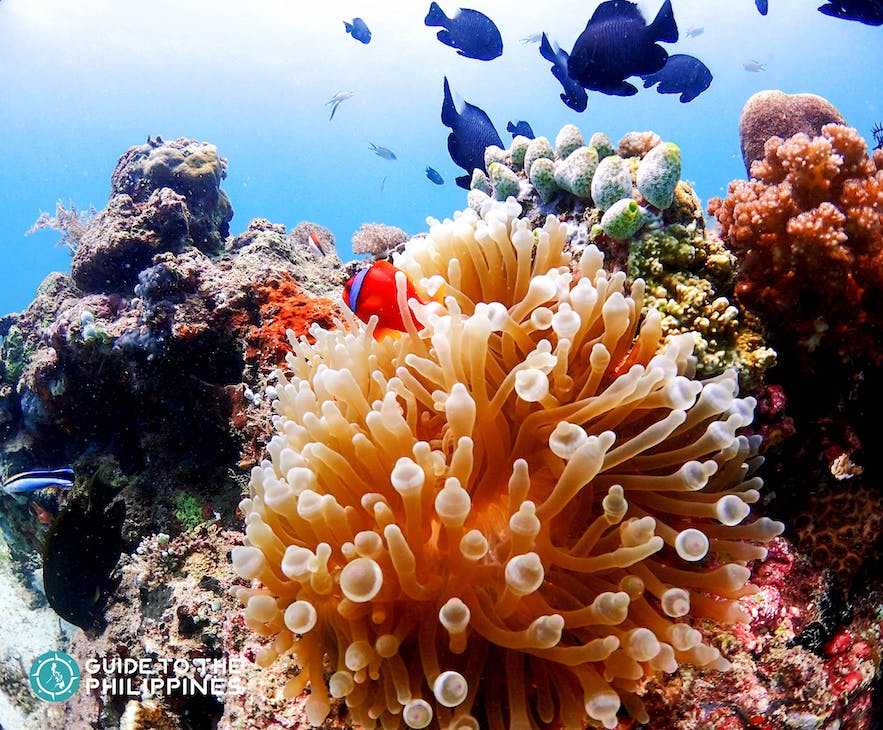 Its aquamarine waters are teeming with colorful fishes and vibrant corals that make for a breathtaking underwater view. Strap on your goggles and dive in!

Aside from island-hopping, you can go diving in Mactan. Top diving sites in Mactan include the Marigondon Cave, Kontiki House Reef, and Olango’s Mabini Point.

The 10000 Roses Café is a Korean café in Day-as Cordova just beside Lantaw Floating Native Restaurant. This Korean cafe is best-known for its field of roses; it’s not an ordinary field, and there aren’t any real roses either.

It is, in fact, an expansive display of 10000 LED-powered roses that light up in the evening. It’s truly a sight to behold!

The cafe is often crowded with tourists posing for that Instagram-perfect shot in front of the beautifully lit roses. Check out 10000 Roses Café and get your photo taken at this Instagram-worthy café.

Check out the fascinating 3D paintings and optical illusion exhibits at Happy World Museum in Barangay Gabi in Cordova.

The museum is divided into themes such as the Philippine Pride, Jurassic Animals, Religious Beliefs, World Famous Art, and Ocean Section.

Stop by Happy World Museum and have fun posing with their 3D painting. Whatever you think of, make sure to think of Happy Museum because it’s good. 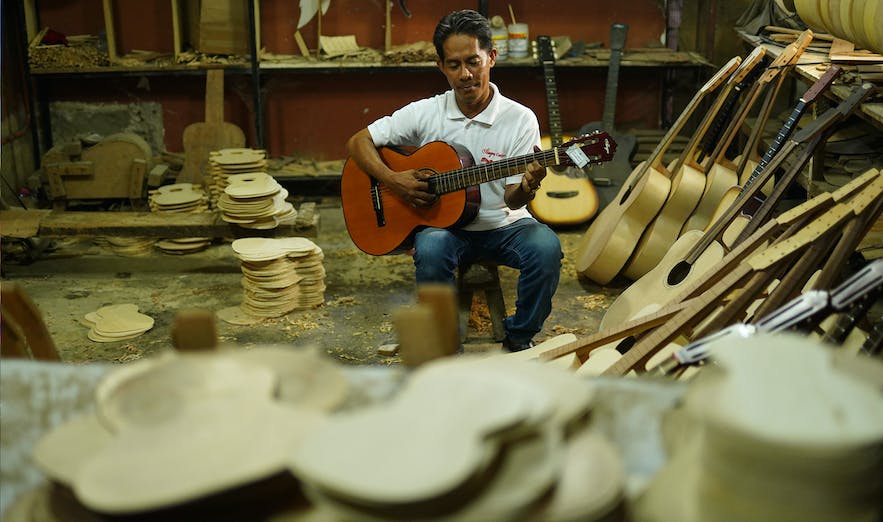 Another cultural treasure Mactan has in store for you is its handcrafted musical instruments. Visayans are known to be avid music lovers.

So, it comes as no surprise that Mactan, Cebu in Central Visayas is home to the Philippine’s best instrument craftsmen.

Mactan-made guitars, ukuleles, and bandurrias are renowned for their quality; they are sought after by musicians all over the country.

If you’re a music enthusiast, don’t miss the opportunity to check out the island’s workshops. Getting a ukulele would be a great Mactan souvenir! You get to bring home the music of Mactan.

If you’re not the musical type or you’re not interested in buying an instrument, don’t cross out these instrument shops from your itinerary just yet.

Shops like the Alegre Guitar Factory allows tourists to watch how the instruments are made for free!

You’ll even be walked through the process by the store salesman who, if you’re lucky, may strum a few notes for you as a demonstration.

You can find Alegre Guitar is in Abuno, Pajac. Take the jeepney Route Code MI-02B bound for Maribago and asked to be dropped at Pajac. From there, hop on a tricycle to take you to the Alegre Guitar Factory.

The Nuestra Señora Virgen de la Regla or the Birhen Sa Regla is the patroness of Lapu-Lapu City. The city’s devotion to the Virgin began in 1735 when Father Francisco Avalle became the first parish priest in Opon.

He brought a painting of the Virgin’s image with him and initiated the devotion to the locals. Since then, the Birhen has become an integral part of Mactan culture.

If you are not Catholic nor religious, feel free to visit the Shrine. However, keep in mind that the locals have a deep reverence for their patroness, so always be respectful.

This is a solemn and holy place for the Oponganons, so dress modestly and observe silence on your visit.

If you come on a Sunday, expect a long queue to the special chapel where you can touch the statue of the Virgin.

If you wait out the line, you will be greeted by its beautiful statue encased in glass and perched on an altar overflowing with flowers.

The Birhen sa Regla is typically garbed in intricately embellished blue and white gowns sponsored by her many devotees.

The Virgen Dela Regla National Shrine is near the Opon Public Market and the Mactan Ferry Port. You can get there by tricycle if your hotel is not located by the main highway.

If it is, you can get on any jeepney that’s bound for Opon Public Market, Mactan Ferry Boat Terminal, or to Cordova. 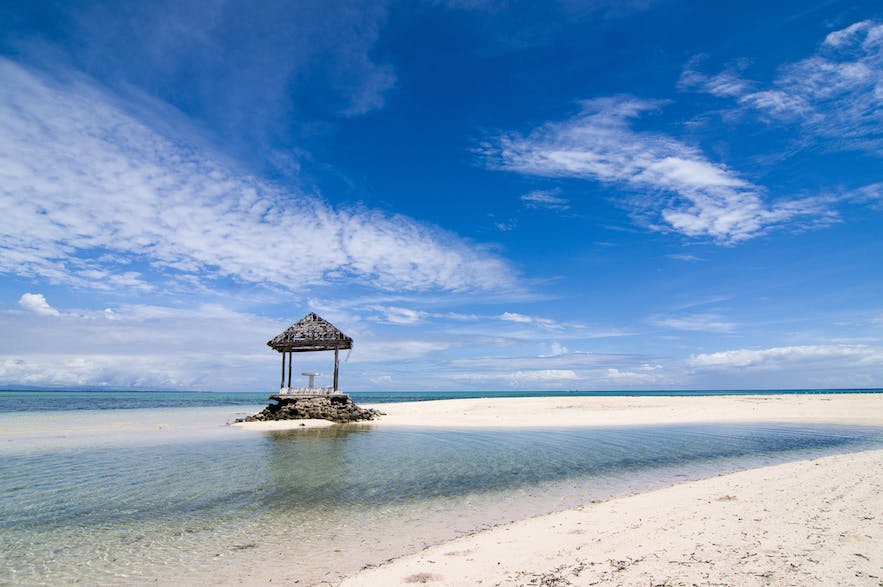 If you’re looking for a tropical island destination that also offers the comforts of the city, then look no further!

Mactan Island is home to a bustling urban community with a rich history, beautiful beaches, and pristine islets are just a few minutes away.

Whatever type of island adventure you want to pursue, Mactan has something for you. If you prefer to immerse in the local culture, Mactan’s cultural heritage will captivate you.

If you’re seeking a retreat in nature, the island’s natural attractions will satisfy your soul.

Mactan Island welcomes the continuous stream of both local and foreign tourists craving for a tropical island experience with the convenience of the city in arms reach.

If you’re also craving for such an experience, then Mactan Island is for you!

Now that you’ve read about the things to do in Mactan, start planning your trip and experience it yourself! Research Cebu tours and activities that you can add to your itinerary now.