The Coral Garden Marine Park Is located a few hundred meters north west of Calis Point, the south point of Coron Island of Coron, Palawan. Coron Island is part of the Calamian Islands which is also known as Calamianes. It is known for having Kayangan Lake, the cleanest inland body of water in the Philippines.

The Coral Garden Marine Park is lightly visited due to its location at the southern end of Coron Island. Considered a protected area, it has calm water next to beautiful cliffs and coves. The maximum depth is approximately 40 meters or 130 feet. With a visual range of up to 25 meters or 80 feet and calm water, it makes the Coral Garden Marine Park a good location for people who wish to appreciate the beauty of nature.

Underwater photographers and professional writers visit this site because the coral garden is undamaged and remains beautiful. The reef top is covered well and nicely by diverse corals. From the soft Dendronephthya and Alcyonacea (formerly known as gorgonians) to the stony Arcropora, there is no shortage in variety of corals in this location.

Different types and colors of corals are not the only attraction of the Coral Garden Marine Park. Marine life is also abundant in this area. It is home to the remarkably regenerative sea star called Linckia, the distinct looking clownfish (also known as anemone fish)and a common sea fern which is also known as the stinging hydroid.

The Lusong Coral Garden is widely regarded as one of the most stunning reef snorkeling destinations accessible from Coron. Many boat cruises stop there, allowing you to explore this magnificent narrow reef teeming with corals. You may also see anemonefish, butterflyfish, angelfish, and huge clams in this vibrant and colorful underwater scene.

This marine park is an all-year round destination. Avoid rainy weather to enjoy the attraction at its fullest. 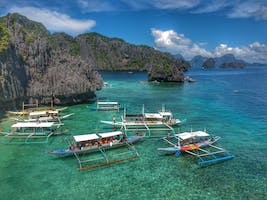