Explore beauty and grandeur of Cebu, and discover why it has earned the title of being the Queen City of the South with this 4 days and 3 nights tour that will take you to its top tourist spots. From historical to island and marine sanctuary attractions, there is so much to discover and experience in this Cebu City tour package.

The tour begins with a relaxed and sophisticated introduction to the city, aboard a luxurious yacht sailing along the Mactan Channel. As this tour starts right before sunset, you will be treated to a visual spectacle of magnificent hues coloring the sky and the city’s buildings illuminating during sunset.

The second day is will take you to several top tourist attractions in the main city and nearby Mactan Island. You will visit cultural and heritage sites, century-old churches and houses, and world-class souvenir shops. Elevating the entire experience is a tour to overlooking landmarks and restaurants, nestled atop nearby mountains, that offer stunning views of the entire city and a food adventure that will be hard to top.

But Cebu is not just about its city scenes. A tropical adventure awaits you in its scenic coasts and paradise-like beaches. The island and marine sanctuary tour will take you to an island with fine, white sand beach and a marine sanctuary with underwater life as rich and buzzing as Cebu’s urban streets.

If you’re in for a total Cebu experience, from land to sea, this tour package is perfect for you. Tick off everything you’ve listed on your Cebu City bucket list. Check available dates to book your tour now. 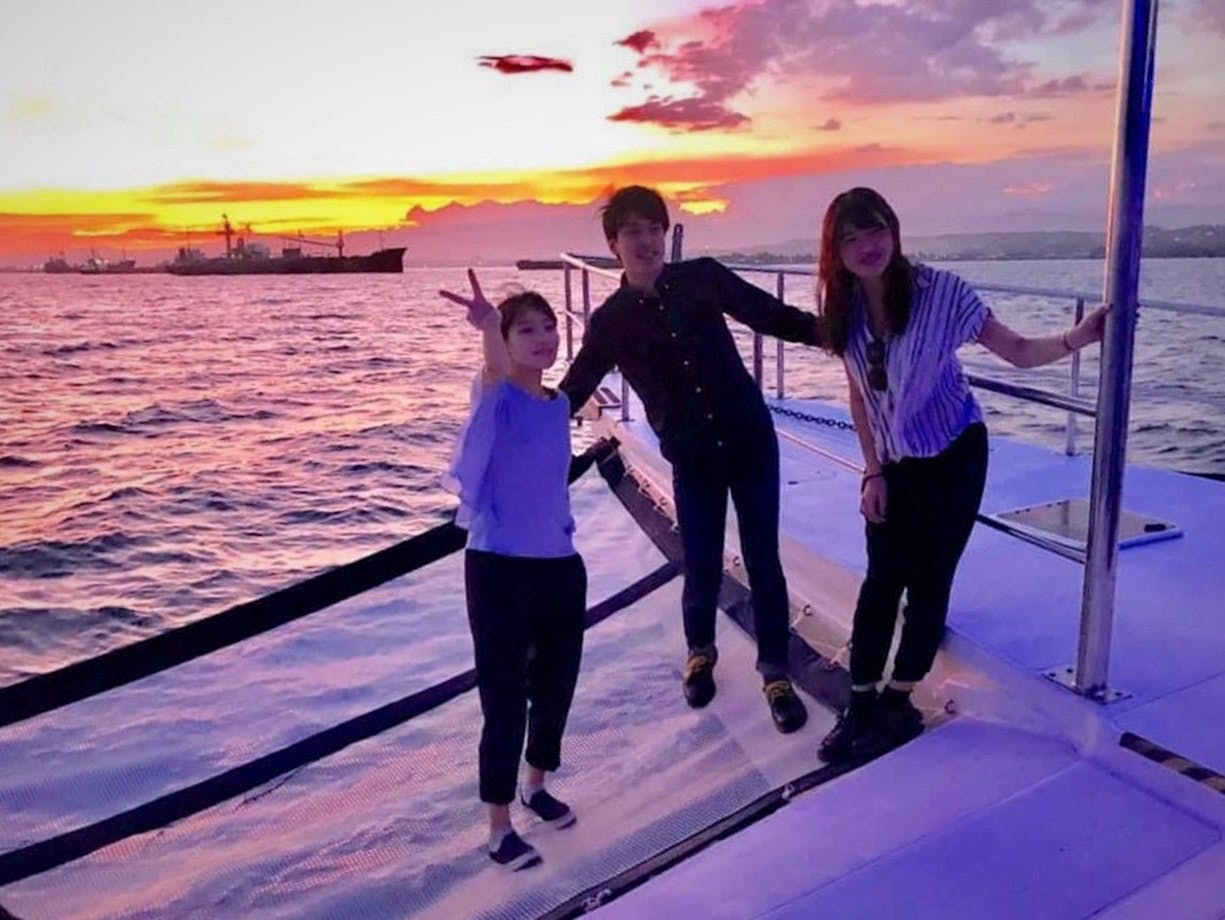 Pick up from Airport or Seaport and Free Day or Tour

Whether arriving at the airport or the sea pier, you will be picked up upon arrival and be taken to your chosen accommodation in Cebu. You have the freedom to explore area on your own but for the best experience, it's highly recommended to choose our Day 1 tour offer. 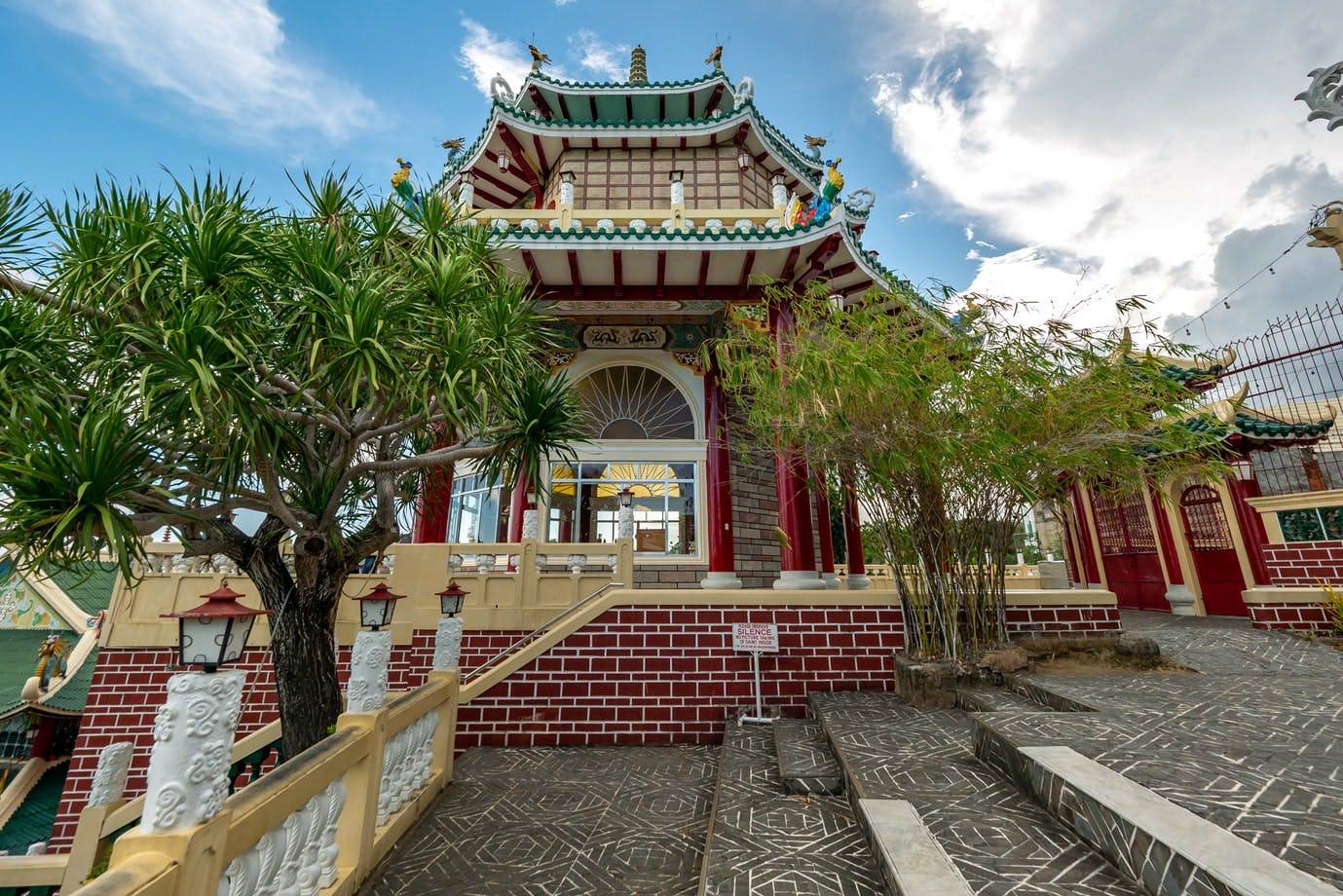 The second day will start with the pickup from your hotel in Cebu 8:30 AM. For those staying at Mactan Island, the meeting point will be at Starbucks Mactan Marina Mall at 10 AM.

The tour begins with a visit to the Mactan Shrine and Lapu-Lapu Monument, built to commemorate the historic battle between the island chieftain Lapu-Lapu and the Portuguese explorer Ferdinand Magellan, where the former emerged victorious against the foreign conquerors.

From here, you will proceed to the Alegre Guitar Factory, one of the foremost makers of world-class guitars that have become an icon of Cebu. Next stop is the Taoist Temple, an important landmark for the Cebu Chinese community, with a viewing deck on top for amazing city views. If the tour reaches 11 participants, the stop will be at the Pedro Calungsod Church instead. You will then be taken to the 17th-century ancestral house of the Yap - San Diego clan, which is still beautifully preserved until present.

Get a glimpse of the devotion of the Cebuano people at the Basilica Minore del Sto. Niño, a monumental cathedral which is also the oldest Catholic Church in the entire Philippines. Right beside it is the Magellan’s Cross, housed in a Spanish-style pavilion and is believed to be one that was planted by Portuguese explorers to symbolize the birth of Christianity on the island. From here, you will do a quick running tour in Cebu’s streets and see the local action at Colon Street, Fuente Osmeña Circle, and Capitol Site. Before heading to the next destinations, a buffet lunch is waiting for you at Cafe Lucita.

From the scenes on Cebu’s grounds, you will then proceed to a Highlands Tour that takes you to breathtaking landmarks nestled atop mountains. This includes the vast and colorful Sirao Gardens, the grand monument of love Temple of Leah, and a stone fortress-like viewing deck Tops Lookout. The tour concludes with you hopping on restaurants with magnificent overlooking views, namely Tops of Cebu, La Vie in the Sky, and Balay sa Busay. 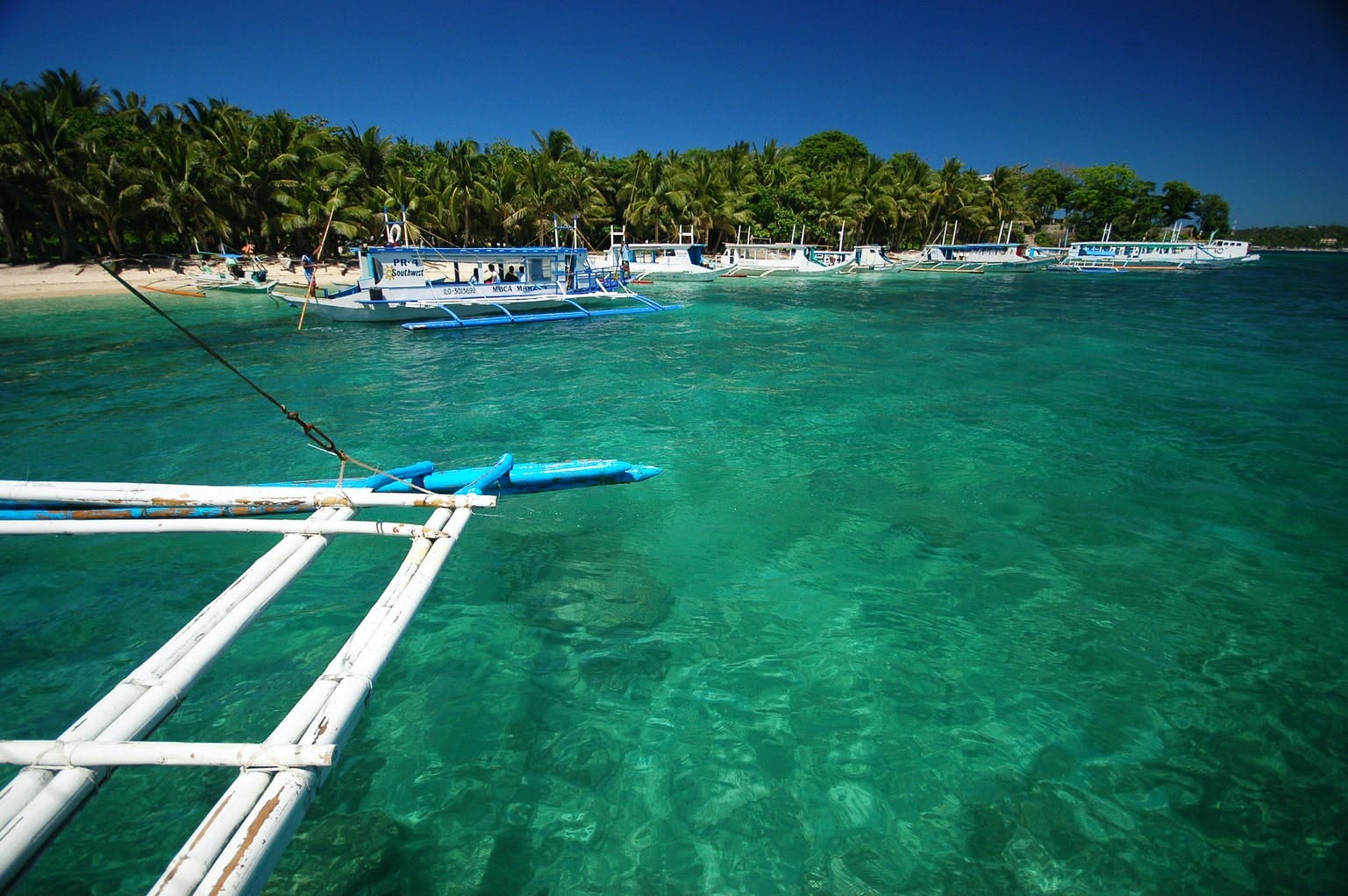 After exploring the energetic city scenes of Cebu, it’s time for you to enjoy the other treasures of Cebu: idyllic islands and underwater action!

You will be picked up from your hotel in Cebu or any resort in Mactan and then you’re off to the Mactan Wharf where the fun in the sun begins! The first destination is a marine paradise called Hilutungan Marine Sanctuary where colorful corals abound and schools of parrotfish, batfish, and other sea creatures call it home. It is an ideal spot for snorkeling or swimming. You will then proceed to nearby Pandanon Island where its glorious white sand beaches are waiting for you to lounge around.

The tour includes freshly grilled barbecue lunch and one round of drink. 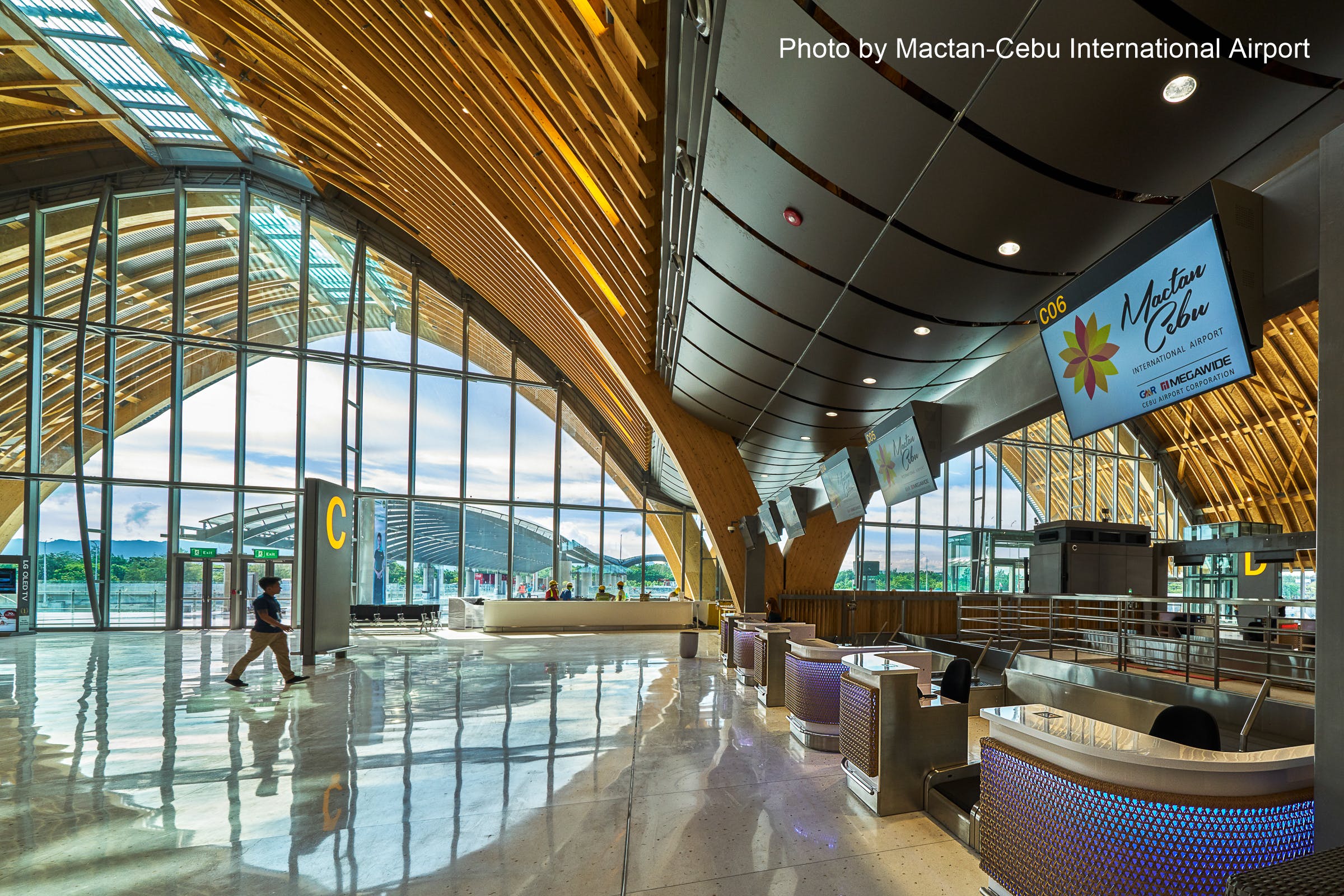 Drop Off to Airport / Seaport

For a more comfortable journey onward to your next destination or point of origin, you will be dropped off at either the airport or seaport by the transport service included in this Cebu tour package.

Our accommodation partners from the budget, comfort, to quality level are near the shopping areas of Cebu. The resort level has beach access and is located in Mactan. The island hopping tour is a shared tour. You will likely be sharing the van and boat with other guests during the island hopping at Pandanon Island. You can buy fresh seafood at personal account, so bringing cash is recommended. The island hopping tour is weather dependent. Since safety is our priority, the captain may choose to take another route.

This package is inclusive of transfers to/from the airport and the tours. This will help you enjoy your trip and worry less about getting from the airport to your hotel and to the tourist spots of Cebu. An agent will be coordinating with you and will pick you up at the airport arrival parking area. There is no additional waiting time. You will board your private transfer and head to your accommodation in Cebu. Airport Pick up: For domestic arrival, proceed directly to Bay 11 of the arrival area. For international arrival terminal 2, the driver will be waiting outside the arrival gate with a signage - guest name. Seaport Pick up: Pick up place for Seaport transfer is at the Police Station outside the port gate. Upon exit from the port gate, walk a few steps until you see the police station on the left side of the road beside Mariner's Court gate. The driver will be waiting for guests with a signage. For your return journey, your private transfer driver will pick you up from outside your accommodation and drop you off at the airport or seaport directly.

This package is inclusive of accommodations during your trip in Cebu. Guide to the Philippines curates only the best accommodation option for your budget so you can enjoy your trip and worry less about finding a place to stay. See our accommodation levels below and our preferred accommodation partners for each day in the daily itinerary. Budget level accommodations will be arranged in a small hotel. For Comfort level, bookings will be arranged in a 3-star hotel private rooms and bookings for two or more people will share a twin/double with an extra bed or extra mattress set up. For Quality level, it will be a 4-star or a 5-star hotel with full amenities and facilities. Children will be assigned in the same room with their parents. For Resort level, it will be a 3-star resort with full amenities, beach access, and complimentary use of watersports activities. If additional room/s are needed, additional costs will incur. Breakfast for children are at additional cost and will be paid upon check out. Guide to the Philippines will provide you with our curated accommodation at the time of your booking from our preferred partners. If our preferred partners are fully booked at the time of your booking, we will find another suitable accommodation for you of similar level. We always do our best to accommodate special requests, which may incur additional costs. Press choose a date to find availability.

Our curated accommodation with basic amenities and facilities. Standard rooms with own bathroom. Good for double or twin sharing guests.

Our recommended 3-star hotels. Standard rooms are bigger and with basic amenities and full facilities. Recommended for families with kids, Rooms can accommodate double, twin or triple (upon request). Kids ages 0-7 sharing rooms are free of charge, kids breakfast to be paid at the hotel.

Our choice of the best hotels in Cebu. Standard rooms include full access to all facilities and upgraded amenities. Best for families and groups. Kids ages 0-7 sharing room with parents stay for free. Kids breakfast to be paid at the hotel.

Our partner resorts in Mactan provide guests with the best resort amenities and facilities, beach access, and have complimentary water sports activities. Standard rooms include a private bathroom and basic amenities. Kids ages 0-7 sharing room with parents stay for free. Kids breakfast to be paid at the resort.