Explore the stunning attractions of Baguio, Ilocos, and Bohol with this 8-day trip. From century-old structures and UNESCO World Heritage sites to incredible natural wonders, this tour will introduce to you some of the most sought-after locations in the Philippines. This vacation package comes complete with accommodation with breakfast, entrance fees, roundtrip transportation, and tour guides.

Along with your tour guide, you will visit Intramuros in the City of Manila, the capital of the Philippines. It is a historic walled area that has stood there since the Spanish colonial period. It encloses structures established before and after World War II, but you will be visiting the most important ones.

From Manila, you will be heading to Northern Luzon to visit more historical sites, as well as unique attractions like the Bangui Windmills in Pagudpud. This group of towering wind turbines is a sight to behold as it stands along the picturesque shoreline off Bangui Bay.

This vacation package will also bring you to Calle Crisologo, the most famous destination in Vigan. It is a beautiful cobblestone street featuring many well-preserved old Spanish houses on both sides. Camp John Hay in Baguio is also included in your itinerary. A former U.S. military base, the spot is now a popular tourist attraction where visitors can lodge, dine, and shop.

After exploring Luzon, you will make your way to the Province of Bohol that also has a lot to offer. One of these is the must-try Loboc River Cruise, where you get to feast on various local dishes while locals entertain you with cultural presentations. Your Bohol Tour will not be complete without visiting the province’s most iconic attraction, the Chocolate Hills.

Embark on this fun-filled 8-day tour to see some of the splendid attractions in the Philippines. Check availability by choosing a date. 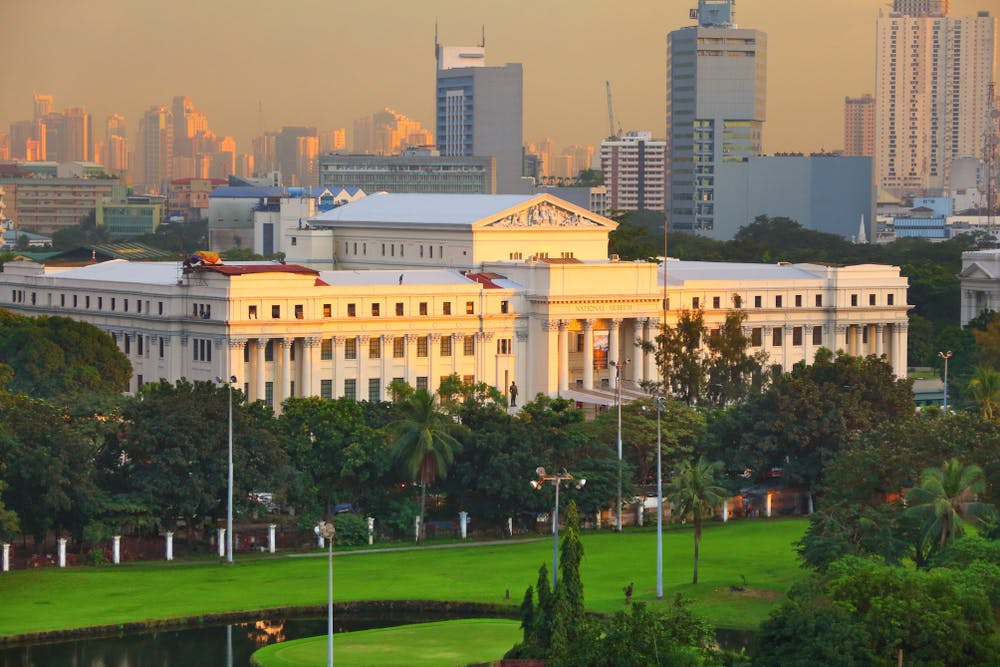 Your arrival in the Philippines marks the first day of your vacation package. Once you reach Ninoy Aquino International Airport, your van will bring you to your accommodation in Manila around or along Roxas Boulevard.

Your day tour will cover the top attractions within Intramuros, a historic walled area in Manila. The 16th-century citadel, called Fort Santiago, is your first destination. This historical landmark was used as a defense fortress and a prison during the Spanish Empire and World War II.

The Plaza Roma is your second stop. A monument to King Charles IV stands at the center of this public square. Your next attractions will get you deeper into Manila’s history. At Bahay Tsinoy, you will learn about the ethnic Chinese who had a long relationship with Filipinos. Meanwhile, Casa Manila will show you the country’s lifestyle during the Spanish colonial era.

Your guide will then take you to San Diego Gardens, which boasts well-manicured lawns. A short walk away is a bastion called Baluarte De San Diego. Afterward, you will proceed to the Philippines’ oldest stone church, San Agustin Church and Museum. Your last stop is Manila Cathedral, which was initially built as a parish church in 1581. 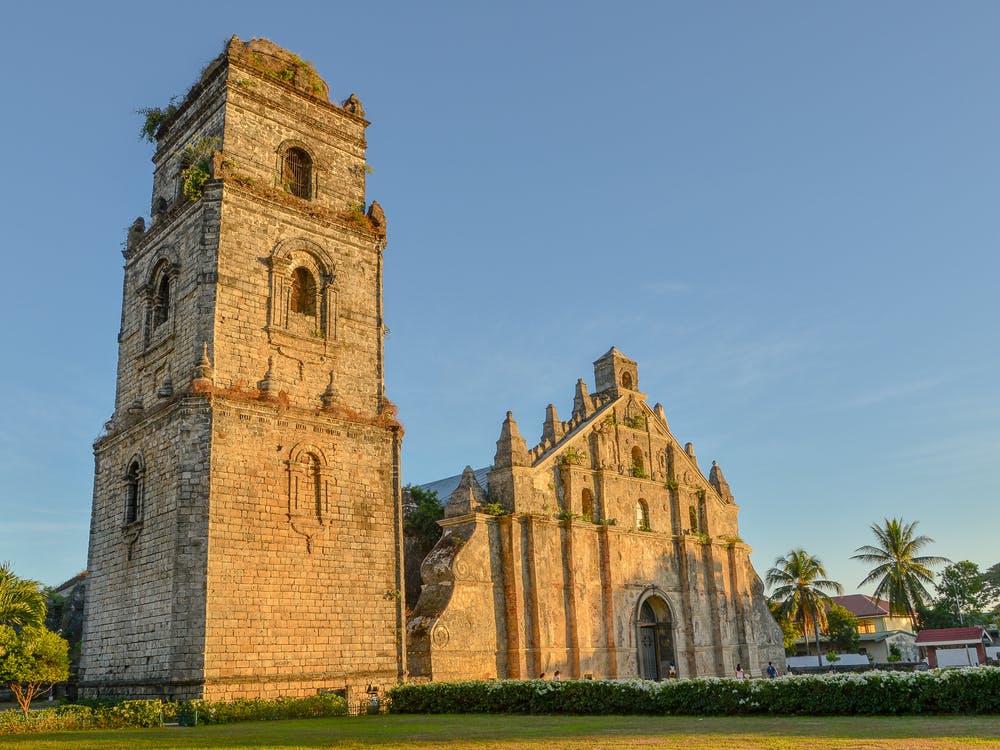 It’s time to head north and explore the City of Laoag, the capital of Ilocos Norte. After checking out of your Manila hotel, you will head to Ninoy Aquino International Airport. You will arrive at Laoag Airport, and from there, your guide will take you to your Laoag hotel.

Your itinerary for this day starts with a visit to St. Williams Cathedral. Established in 1612, the current structure features an Italian Renaissance style. Near the cathedral is the Sinking Bell Tower, known for its characteristics of sinking into the ground every year.

You will then visit the Museo Ilocos Norte, which displays an extensive collection of Ilocano artifacts such as traditional clothing, ceremonial objects, and more. The following attraction is Aurora Park, a community center used during the 16th century.

From Laoag, your van will bring you to the Malacanang of the North in Paoay. Now serving as a museum, the building is the former residence of late Philippine President Ferdinand Marcos. You will also drop by the Paoay Church, which is declared as a National Cultural Treasure.

Your tour will end at Marcos Museum in Batac. Inside the museum are memorabilia of the late president, as well as the site of his cenotaph. 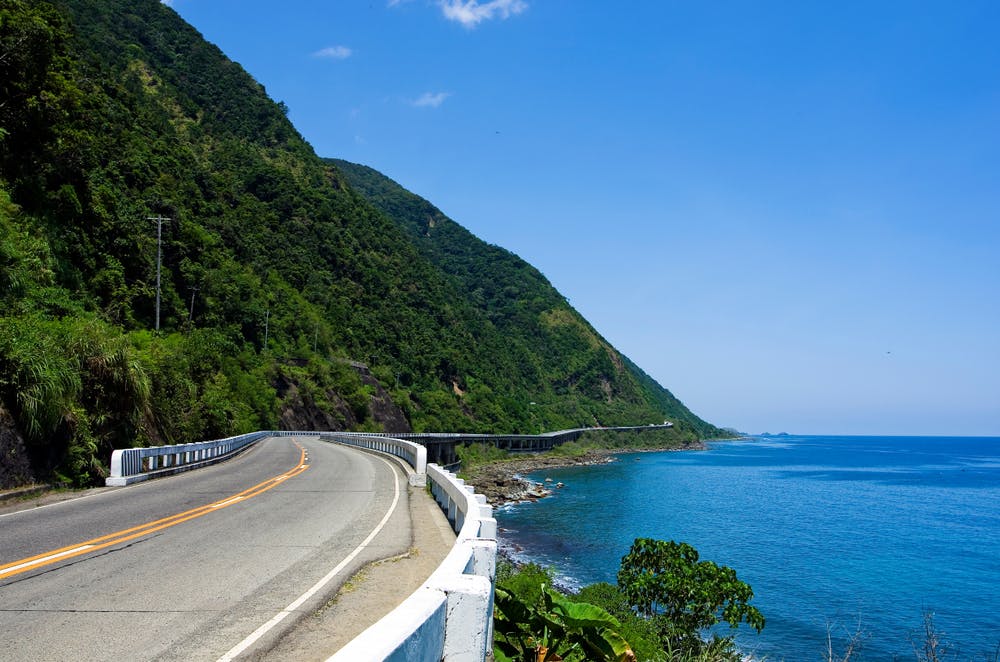 On Day 3, you will head further north of Ilocos Norte. Your guide will pick you up at your accommodation in Laoag and drive you to the town of Burgos, where you will see the Cape Bojeador Lighthouse. Set on Vigia Nagpartian Hill, the lighthouse was constructed during the Spanish colonization.

Your next stop is another towering attraction, Bangui Windmills. These 20 wind turbines are 70-meters high and lined along the 9km Bangui Bay shoreline. Then, you’ll visit a long bridge called Patapat Viaduct. Completed in 1986, the bridge connects the Ilocos Region to Cagayan Valley.

Sitting at one edge of Patapat Viaduct is Agua Grande. It is a great place to relax and have a picnic. Next, you’ll visit Paraiso ni Anton, which features a cascading spring and a religious grotto. You’ll be heading back to Burgos afterward and stop by the picturesque Kapurpurawan Rock Formation. If you wish to get a closer look at this attraction, you have the option to go hiking or horseback riding.

Your final stop is Pasuquin Salt Stand. You can purchase salt and salt-preserved food to take home. If you seek something more exciting to do, you may add the 4x4 ride at Lapaz Sand Dunes to your itinerary.

On the fourth day, you will travel south toward the province of Ilocos Sur. This location is home to numerous historical sites, some of which can be found in the City of Vigan, a UNESCO World Heritage Site.

You’ll make your first stop at the National Museum Ilocos Sur Complex. This establishment pays tribute to the 6th Philippine President Elpidio Quirino and Padre Burgos, one of the three martyr priests who advocated reform during the Spanish colonization.

From there, your next attraction will be Bantay Church and Bell Tower, located in the town of Bantay. These two notable structures survived World War II, but Bantay Church was destroyed and reconstructed during the 1950s. Afterward, you will drop by the Syquia Mansion Museum, where you get to know about the important events during the Spanish colonial era.

You’ll then drop by the Earthquake Baroque-style St. Paul Metropolitan Cathedral and Baluarte, a zoological park housing various animal species. Your van will take you to your Baguio hotel after the tour. 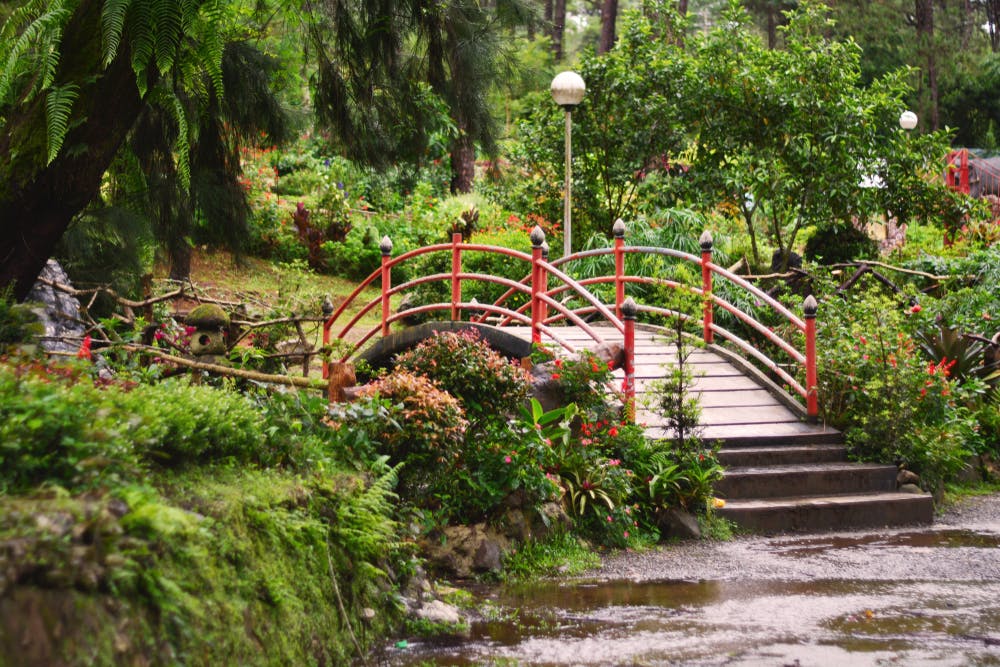 The Summer Capital of the Philippines, Baguio, will be your destination on the fifth day. After getting picked up at your Baguio hotel, you’ll head to the Philippine Military Academy, a leading educational institution where Filipinos who dream of becoming military officers are trained.

From the academy, you’ll proceed to The Mansion, the Philippine President’s summer palace. It has a museum exhibiting presidential memorabilia. Your next stop is Camp John Hay. This tourist destination is originally a U.S. military base and now has hotels, shopping establishments, and more.

You’ll also pay a visit to Mines View Park, a scenic viewpoint where you get to have an overlooking view of the Itogon mining town, particularly its neglected gold and copper mines. Your next destination is another recreational area, Wright Park. Expect to find countless pine trees here, as well as horseback riding facilities.

Centennial Park is also part of your Baguio tour. Besides lush flora, you will also see here a bronze sculpture and an art gallery. Finally, you will drop by the Good Shepherd Convent, which sells an array of local treats, including purple yam and peanut brittle. You will travel back to your Manila hotel after completing the tour. 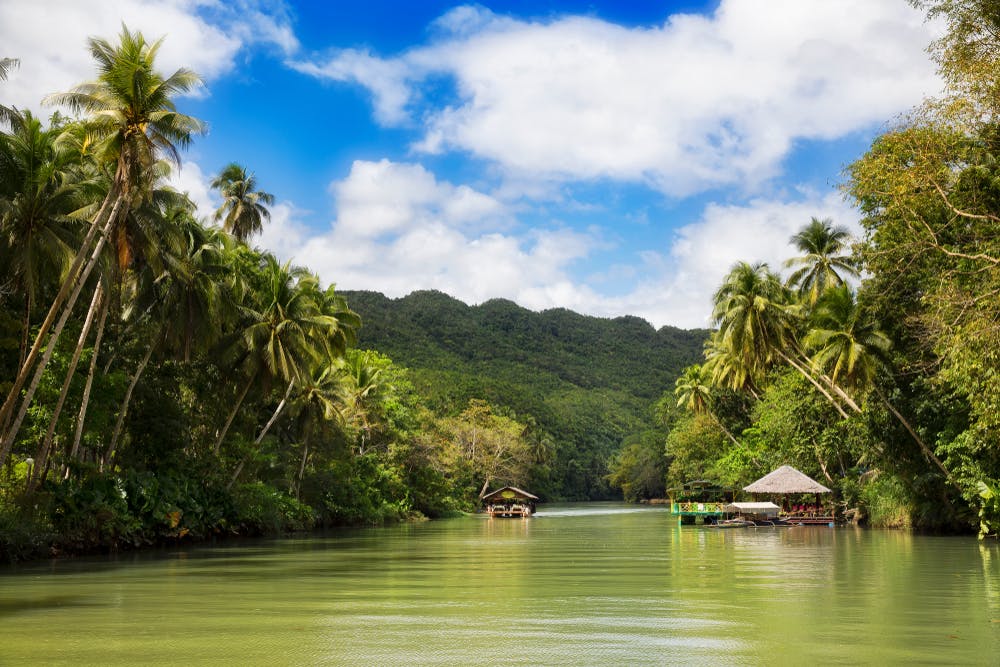 After you check into your accommodation, you will begin the day tour. Your first destination will be Corella Tarsier Sanctuary, home to the smallest primates in the world. Tarsiers have big, sensitive eyes, and so visitors are prohibited from using flash photography.

A relaxing Loboc River Cruise will be the next part of the tour. Hop aboard a floating restaurant that will cruise along the jade-green river while you enjoy a buffet of local dishes and a cultural performance. As soon as you return to the shore, your van will bring you to Baclayon Church. This National Cultural Treasure was founded back in 1596.

Your next stop is Butterfly Conservatory, where an array of butterfly species are being taken care of. After that, you will head to Bilar Forest, a man-made site filled with mahogany trees. Last but not least, you’ll stop by the world-famous Chocolate Hills that comprises over 1,000 mounds. 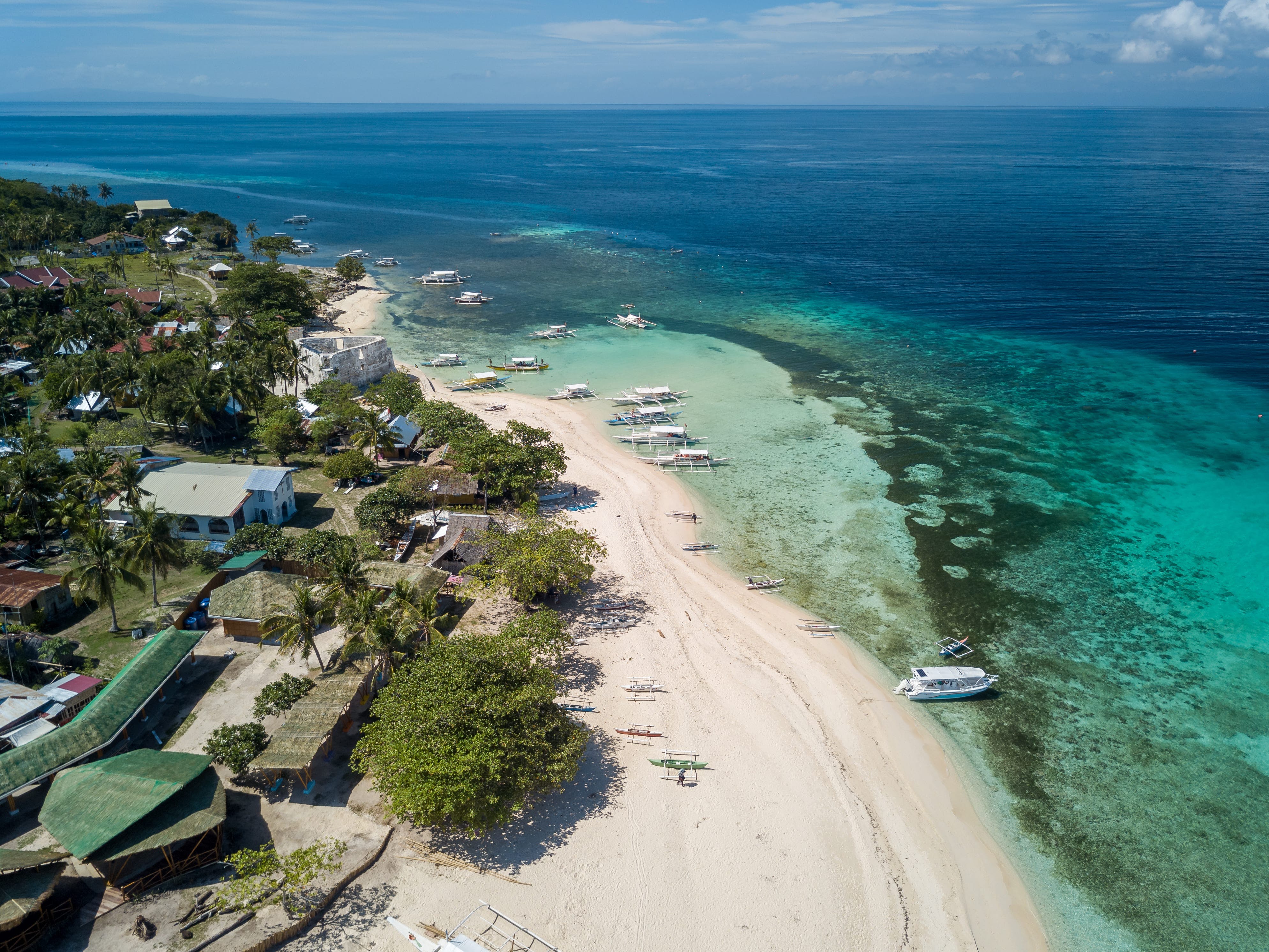 You’ll have some island fun on the seventh day of the vacation package. Your van will pick you up at your accommodation on Panglao Island and take you to a pier. Here, you’ll board a boat that will then sail you to your destination, Pamilacan Island.

Set in the heart of the Bohol Sea, the island of Pamilacan is around 12.5km away from mainland Bohol. Not more than 2,000 locals inhabit the place, and their main livelihoods are focused on dolphin-and-whale-watching tours. So, be sure to stay alert as you might encounter dolphins and whales during the boat trip.

Pamilacan Island boasts white-sand beaches and crystal-clear waters. Feel free to sunbathe on the shore or relax underneath the trees. You can also go swimming and even snorkeling. The island offers beautiful corals and is home to various sea creatures like sea turtles, schools of fish, and more.

You may also interact with the locals and learn more about their daily lives and livelihoods. You can easily go around the village as it only consists of a few houses and a church. Once you get back to mainland Bohol, you’ll make your way to your hotel in Panglao. 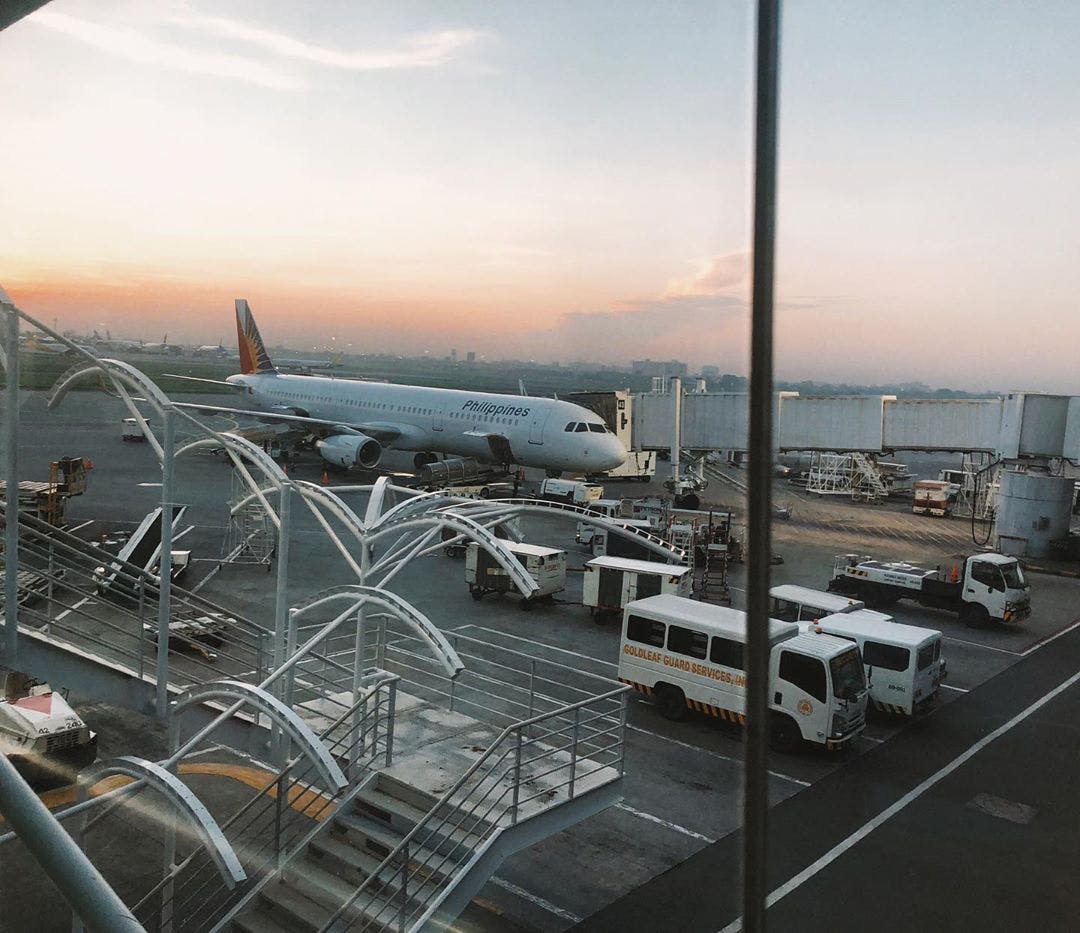 Day 8 marks the conclusion of your vacation package. After checking out of your Panglao accommodation, you’ll head straight to Panglao International Airport. You will then board a plane back to Manila. The plane’s arrival at Ninoy Aquino International Airport is typically after a flight of fewer than two hours.
Read more

See our accommodation levels below and our preferred accommodation partners under each day in the daily itinerary. All accommodation levels, bookings for one person will be arranged in single rooms, bookings for two or more people will share a twin/double, and odd number groups will always be allocated a single room. If you are travelling in a group, but prefer a single room, please make separate bookings. Teenagers and children will be arranged in the same room with parents. If additional room(s) is needed, additional costs will incur. For multi-day guided tours, accommodation cannot be upgraded and the levels below do not apply. Guide to the Philippines will provide you with the best available accommodation at the time of your booking from our preferred partners. If our preferred partners are fully booked at the time of your booking, we will find another suitable accommodation for you of similar level. We always do our best to accommodate special requests, which may incur additional costs. Press choose a date to find availability.