Puerto Galera, officially the Municipality of Puerto Galera (Tagalog: Bayan ng Puerto Galera), is a 1st class municipality in the province of Oriental Mindoro, Philippines. According to the 2015 census, it has a population of 36,606 people. It is located at the north-westernmost part of Oriental Mindoro, and at the south-western end of the Isla Verde Passage, about 130 kilometers (81 mi) south of Manila. It is mainly accessible from the Southern Luzon gateway port of Batangas by bamboo boats (bangka) operated by local regular operators. Seaplane Operator Air Juan Aviation, Inc. flies 2x daily flights from Manila to Puerto Galera vv. on their Cessna Grand Caravan Seaplanes.

Puerto Galera is 51 kilometres (32 mi) from Calapan, the provincial capital.

Chinese traders possibly knew the place before the arrival of the Spaniards but there is no evidence of Chinese settlement. The place was likely also known by other Southeast Asian merchants, who found it convenient to load and unload trading goods. The State of Ma-i extended to the Puerto Galera area. The bay was a convenient place to shelter ships against bad weather and a warehouse was built to store supplies and trade black rice from Muelle.In April 1570, the Spaniards arrived in Bombon (now known as Batangas), and later sailed through the Isla Verde passage, landed and called the place Puerto Galera (the port of Galleons). Legazpi, became the first Spanish governor-general of the island. A garrison for soldiers was built in Muelle and watch towers were erected in Dampalitan Point to monitor naval activity in the bay. Spaniards came to conquer for their king and chased the Muslim Moro pirates who were disrupting their trade with the Chinese and the natives. The later proved to be not only skilled warriors but also good negotiators even in the face of defeat.In 1663, a change in the form of administration occurred in the island, the corregidor was replaced by the alcalde-mayor or provincial governor and the capital was moved from Puerto Galera to Baco. In the seventeenth century, the relative prosperity of the city underwent a serious setback with the rise of Muslim piracy. Both pirates attacks and the mismanagement of the Spaniards resulted in driving the native population either into exile in safer places or sending them inland to comparative safety.

The traditional economy of the city used to be fishing and subsistence agriculture, but with the boom of tourism at the end of the 1970s, the service sector became more and more important and led to population and economic growth. Of the 13 villages ("barangays") in Puerto Galera, half of them now rely on tourism-based activities for sustenance.The town has a number of business and commercial establishments. Candava Supermarket, New Virgo Grocery, Parkway Supermarket, Castillo Store are supermarkets in Puerto Galera. Major banks include Philippine National Bank (PNB) Savings Bank, Rural Bank of Puerto Galera, Maxbank, and other microfinance banks.In addition, Mindoro is quickly becoming one of the key places in the development of renewable energy in the Philippines. With several large wind, hydroelectric, and geothermal projects under construction, the island hopes to be a net exporter of electricity by 2016.Telecommunication services are provided by Digital Telecommunications (Digitel), Smart Communications, and Globe. Cable and satellite television operators provide access to local and international broadcasts. Broadband Internet services are likewise available through the numerous internet cafes located in all barangays. Community radio stations Beach.fm and Flazh Radio also operate in the municipality.

Tourism now represents the core activity of the city economy which is well known for its beaches, scuba diving and entertainment activities, including "go-go bars". The city and its beaches have also become one of the many sites of the Philippines sex tourism industry.This coastal town has a number of pocket beaches and snorkeling and Scuba diving spots. The area was designated a Man and Biosphere Reserve of UNESCO in 1973 and has some of the most diverse coral reef diving in Asia. Since 2001, the marine environment has benefited from a huge reduction in the number of fishermen in the area, as they gain higher revenue from tourism activities.

Puerto Galera is included in the list of the "Club of the Most Beautiful Bays of the World", and is the only bay in the Philippines to be found there.Among the beaches in Puerto Galera are Sabang Beach and White Beach, which have an active nightlife with numerous bars and restaurants. Both places are directly accessible from Batangas by bangka regular lines. On the West, where is only a local boat connection to Abra de Ilog, the planned road between the two cities has not been completed yet. On the East, the city connects by road to Calapan through the Mindoro circular road.

Sabang Beach, White Beach and beyond

White Beach is situated 12 km east of Sabang beach. It is connected by trike or jeepney to Sabang Beach. White Beach remains popular with local travelers and Filipino families.. The place features a long beach of white fine sand. Filipinos like to come here at week ends and during the holiday season. There is a long line of restaurants and a variety of shops, the place is buzzing with life day and night. Since 2001, White Beach has seen uncontrolled development. New restaurants and places to stay are encroaching on the beach itself.

Behind the beaches are the generally unexplored mountain ranges of central Mindoro. A local attraction is the 9-hole golf course located on the hillside above White Beach which has views over Puerto Galera's natural harbor and the Verde Island Passage. Mangyan tribes are scattered over the mountainsides - some of the more remote tribes have virtually no contact with the outside world. Of the eight tribes on Mindoro, the Iraya are the largest. They are based in the Puerto Galera area.

Puerto Galera, especially Sabang area, is among the top diving destinations in the Philippines and in Asia. Diving sites are found less than 5 minutes from Sabang Beach. The diving generally focuses around the areas either side of Escarceo Point. Marine life is diverse. 180+ species of nudibranchs are found in the area and many species of fish can be seen. A variety of wrecks have been sunk over the years in addition to the one wreck of an engine of a WWII Japanese patrol boat. The major diving federations PADI, CMAS, NAUI and Technical Diving International - are represented in the area, offering courses from beginners' open water to advanced and technical diving (rebreather, trimix). Diving trips in the Verde Island passage, at the heart of the Coral Triangle are organised from Puerto Galera. Many threatened species such as a variety of sea turtles including hawksbills, olive ridleys, and green turtles, humphead wrasses, giant groupers and giant clams are present in the Verde Island Passage.

The accelerated development of tourism jeopardizes the preservation of its delicate ecological system consumed by "overdevelopment due to a thriving but runaway free-market tourism". Currently this appears to be the "biggest problem" of Puerto Galera. Accelerated tourist oriented development poses degradation to the environment, among which, seawater pollution brought about by improper sewage and wastewater discharges. Unless serious action is taken, with regular seawater monitoring, this situation poses a serious threat to the sustainability of various tourist activities at the beaches.

In the summer of 1998, extensive coral bleaching occurred around Medio Island and a large section of a shallow coral reef system (referred to as the "Coral Gardens") died. Since then the coral has regrown with a larger diversity of coral species replacing the prolific table corals. Corals in Puerto Galera were largely unaffected by the 2010 El Niño event. The local government declared the 4,828 ha of the municipal waters (12,690 ha) as protected waters giving special protection to corals and reef fishes.In 2006 two super typhoons damaged the shallow reefs around Escarceo Point. A major section of the faster-growing coral species growing up to a depth of 6 metres (20 ft) was destroyed. This represented about 5% of the coral reef in the area. Extensive signs of new coral recruitment were noted in mid-2008. Acropora species (staghorn and table coral) rapidly recolonized the area so that most of the damaged coral has been replaced with new growth. 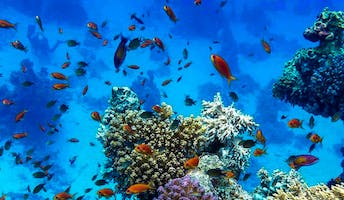