Lechon in the Philippines: A Guide to Filipinos' Favorite Roasted Pig and More

If you drop in on big gatherings in the Philippines or among Filipinos, from birthdays to festivals or fiestas, weddings to Christmas get-togethers, it is almost certain that you will find it on display at the center of the table.

Let me break down to you one of the most iconic Filipino dishes, the lechon. What is it and what makes it so good? Learn about lechon in this guide to help your plan out your food tours in the Philippines. 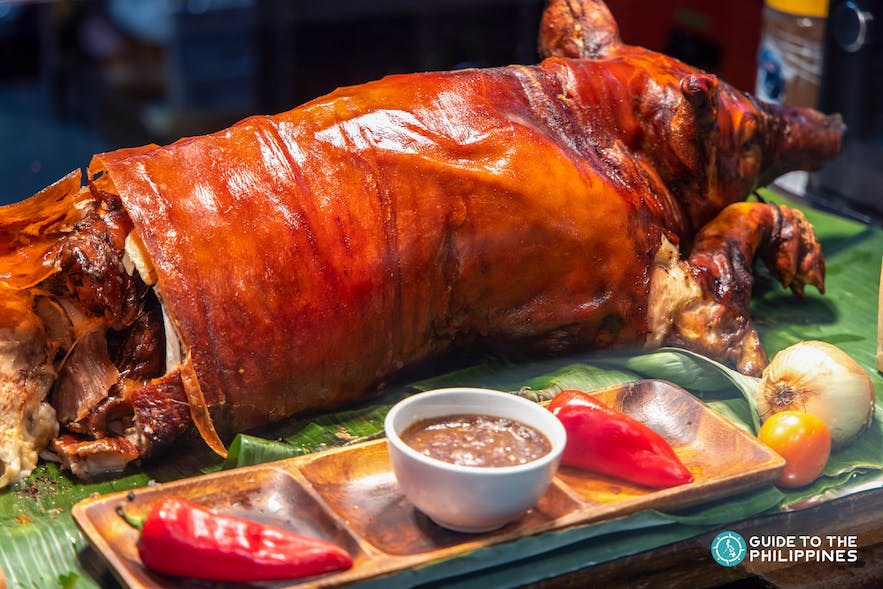 The name “lechon” is said to have come from the Spanish word “lechona” which means “suckling pig.” This indicates that the first version of this dish is what is locally called lechon de leche.

Whole pigs are spit-roasted slowly over charcoal for hours, and when done right by masters called “lechoneros,” the meat inside is rendered tender and juicy and the skin is crisp like candy and caramelized to a perfect orange brown sheen.

Unlike other roast pig dishes of other cuisines, the Philippines' lechon is known for its skin. The perfect lechon skin is cooked evenly and remains smooth and shiny. The best ones feature skin that remains crisp for several hours! 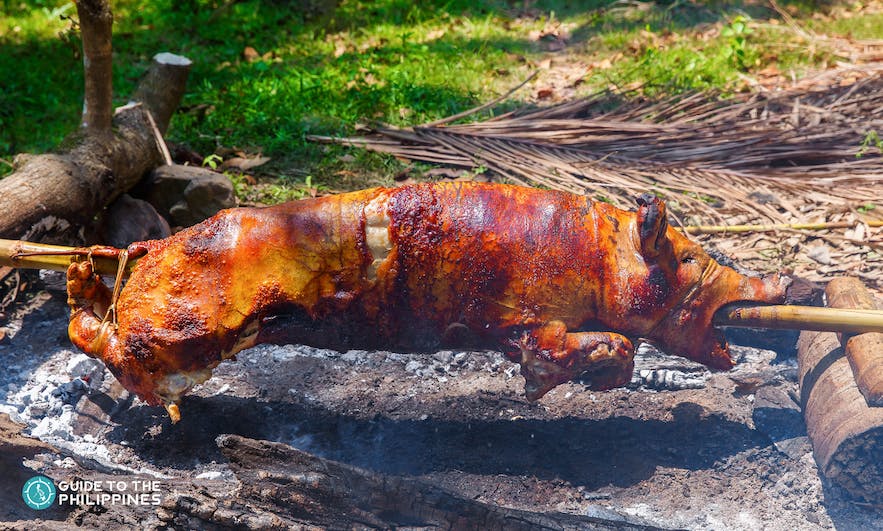 Cooking lechon is quite a tedious process, especially in the earlier days, where the spits are rotated manually. Now, most of the lechons are cooked with spits that are rotated mechanically, but some of the elder lechoneros still insist on doing it manually to achieve the perfectly even color and cook of the skin.

Meanwhile, the charcoal embers used to cook lechon are also adjusted manually, with lechoneros shifting the heat every few minutes to whichever area of the lechon they feel is not cooking quickly enough. 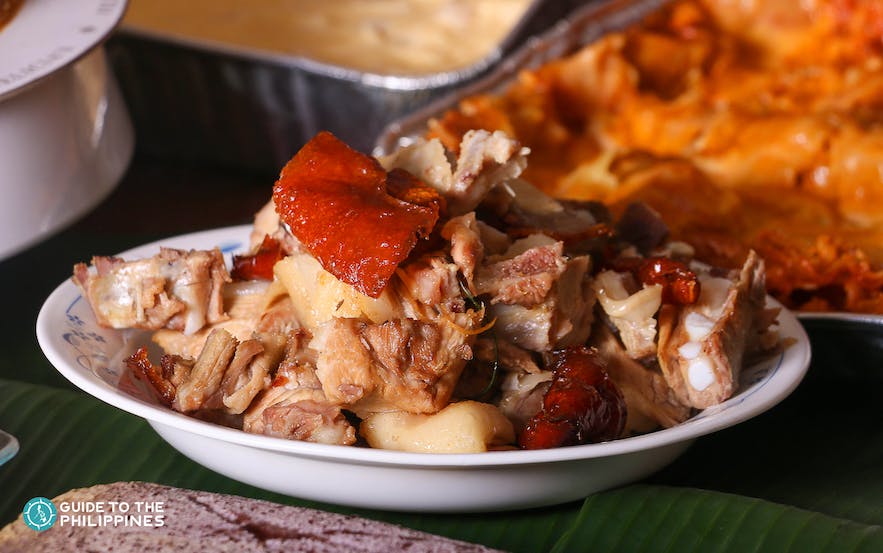 Despite the Spanish name, the lechon is not necessarily of Spanish origin. Many food historians and chefs believe that the prior to the Spanish colonization of the Philippines, pigs and wild boar were already being spit-roasted over an open flame, a technique that Filipinos refer to as “inasal.”

The name lechon is believed to have been assigned to the roasted suckling pig later on. Ironically, this name caught on and now refers to more than just the suckling pig dish.

Lechon and Its Philippine Variants

Nowadays, the term lechon can refer to many different dishes, most of them spit-roasted over charcoal. Here are some of the nation’s favorites.

Chef’s note: There is an actual lechon parade held yearly in La Loma, Quezon City where more than a dozen lechon stalls do their business. 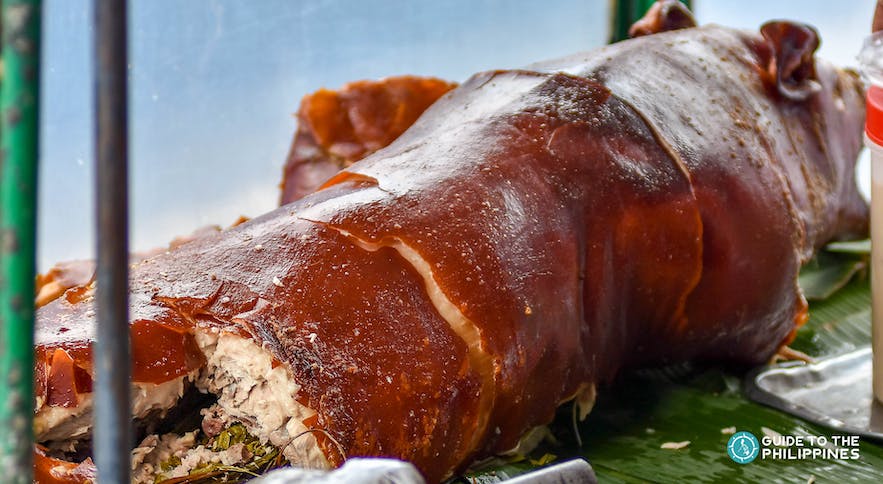 Easily the best known and most well-loved version, a whole pig, with entrails removed, is spit-roasted until perfectly tender inside and perfectly crisp on the outside.

Lechon versions from Luzon are usually roasted plainly, sometimes with a stuffing of lemongrass and garlic and served with a sweet and sour sauce made from sugar, vinegar and the pig’s liver.

Lechon available in the South, the Visayas and Mindanao regions, are usually stuffed with lemongrass, garlic, spring onions, and chilies but the stuffing can range from anything like ginger, peppers, garlic chives to even pineapples. They are more heavily salted, making the lechon flavorful enough to stand on its own.

It is in one’s best interest, especially in Cebu, not to ask for lechon sauce when eating lechon! If one must insist on a dipping sauce, a combination of vinegar, garlic, chilies and ginger may be acceptable. Eating Cebu lechon should be on top of your itinerary when in that part of the Philippines. 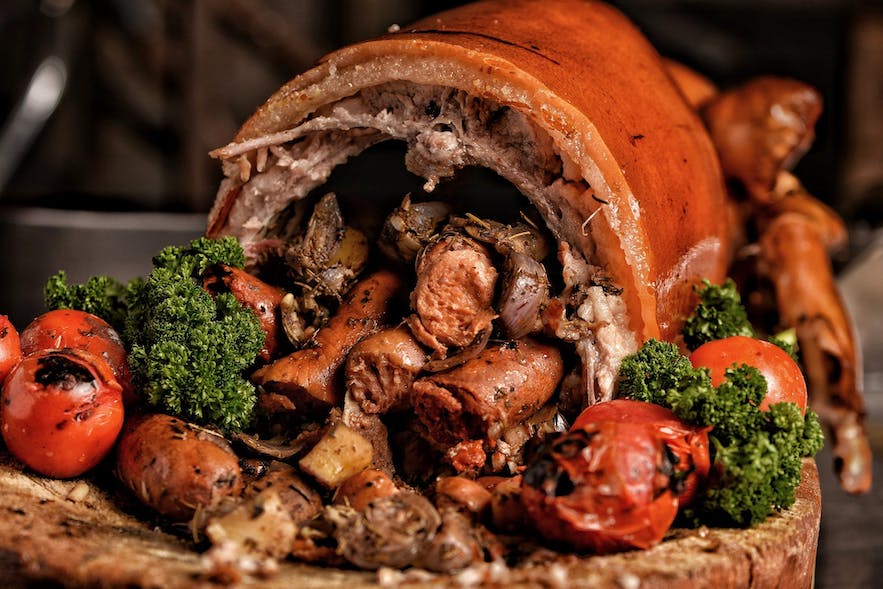 In an effort to stand out in a sea of delicious lechon, enterprising and creative lechoneros also stuff their pigs with even more food. Now, there are lechons with rice stuffings, anywhere from paella to truffled rice or even Chinese sticky rice.

Some lechons are stuffed with a whole chicken inside or even hungarian sausages. As close as lechon is to perfection, it has not stopped people from trying to add to it and diners are the biggest beneficiaries of that. 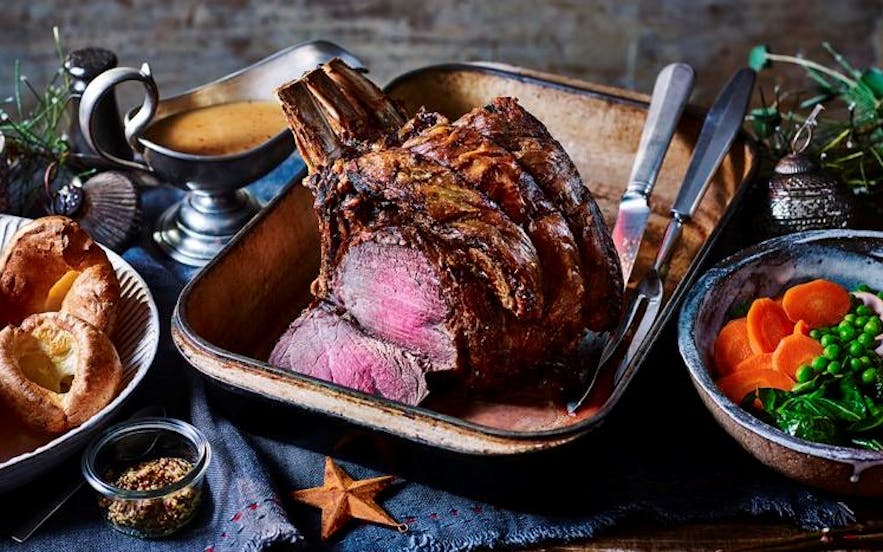 Whole roasted calf is another party favorite, although there are not too many places to order this from unlike the pig version. Also spit-roasted, the calf is flavored with a sauce that is a curious combination of soy sauce, Worcestershire sauce, garlic, onions, and lemongrass.

The best parts include the burnt ends while the skin, when perfectly roasted is a unique treat, as it can be crunchy and slightly chewy at the same time. 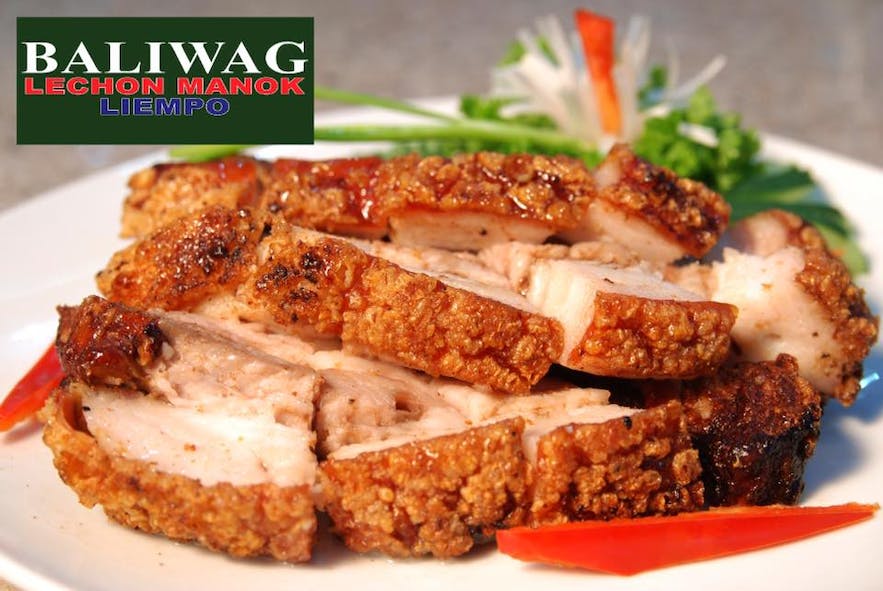 Easily the most available and affordable of the lechons, these are whole chicken or a large whole piece of pork belly that are stuffed with lemongrass, spit-roasted and served with the same sweet and sour liver sauce as the lechon de leche.

There is a stall on almost every street corner in most cities of the Philippines, and it is a go-to when families are too busy to cook. People on their way home from work usually stop by a lechon manok or lechon liempo stall and buy one or two for family dinner.

Not as easily available in the city, karnero (lamb) or cabrito (young goat), are also spit-roasted whole. Mostly found in rural areas, the charcoal aroma and fragrant stuffing combine to produce flavorful and tender meat that is free from any gamey aroma.

When one finds oneself at a feast or celebration in the provinces, this is a most welcome treat. 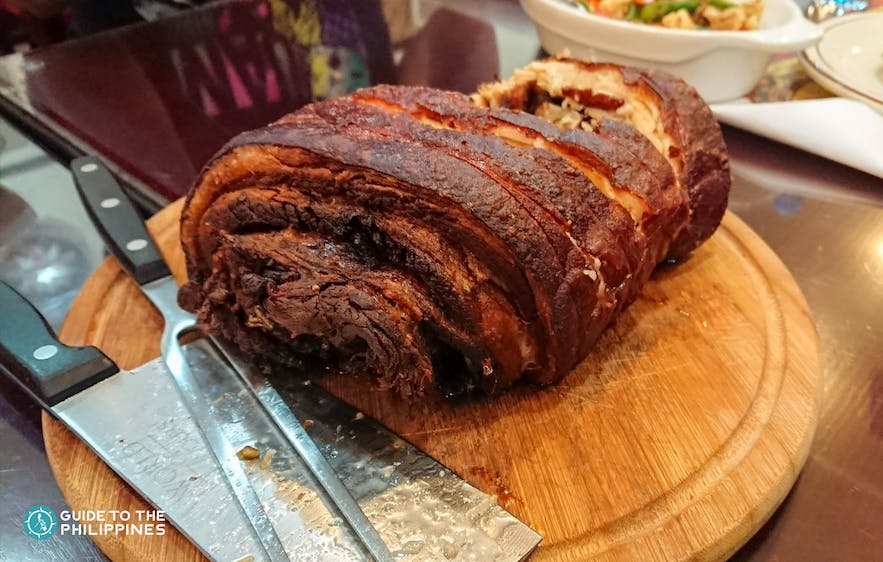 The most recent iteration of the lechon is a large piece of pork belly rolled into a thick tube and then roasted. Since a whole lechon is quite expensive and feeds about 30 people, the belly roll is an alternative for smaller, more intimate gatherings.

The roll is usually stuffed with lemongrass as well, and served with either the liver sauce or spiced vinegar. 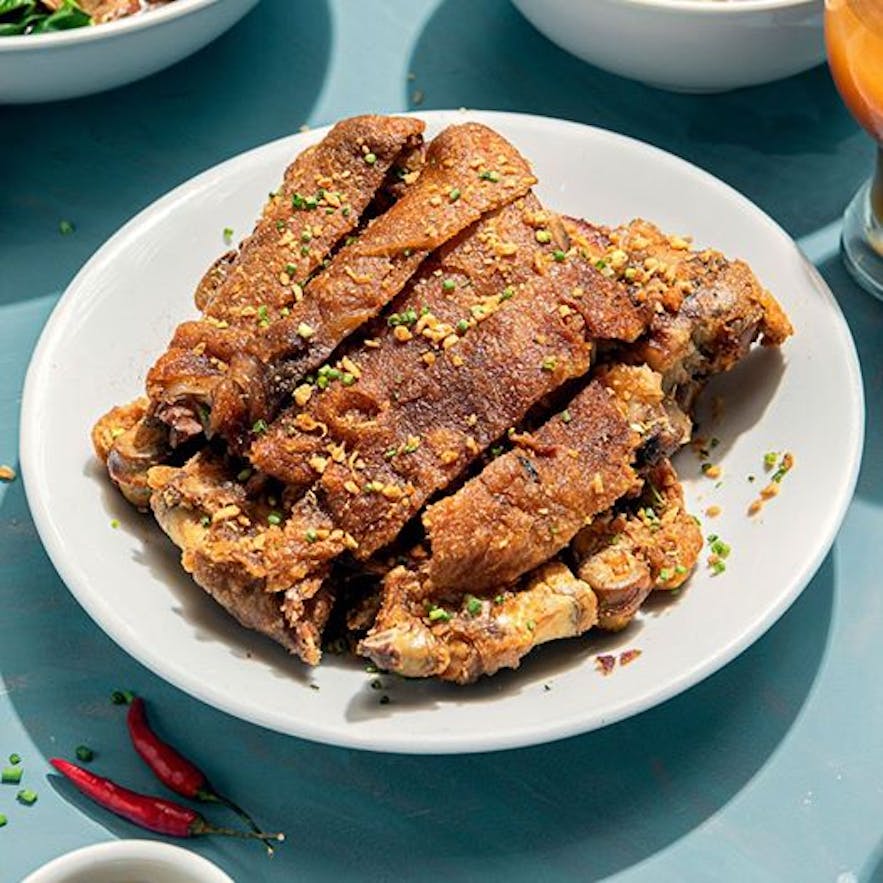 Not everyone has the time or the facilities to spit roast over charcoal and these two are the home cook’s alternatives. Pork belly or pork knuckles are boiled for a couple of hours to tenderize, left to air dry for a few hours and then deep-fried in a kawali (stainless wok).

Despite being cooked indoors, they do mimic the tender meat and the crispy skin of the original lechon, hence the name. These are usually served with either the liver sauce or a dipping sauce of soy sauce, vinegar, chilies, and garlic.

Filipino Dishes Made from Lechon

The lechon is quite a feast onto itself, but it is a gift that keeps on giving. Two dishes also spring forth when making lechon. 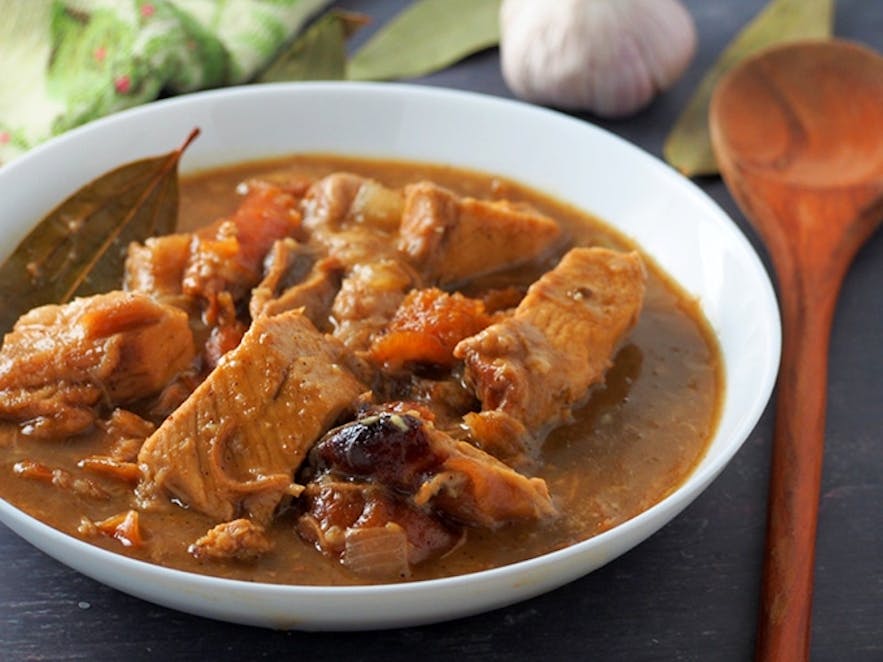 Filipinos don't like anything go to waste, especially when it comes to food. The leftovers from the lechon, like the bones, the skin that is no longer crisp, the head and the legs, are stewed together with vinegar, chilies, black peppercorns, and the leftover liver sauce, creating a rich stew that is usually served the day after the feast.

It has a great balance of salty, sour, and sweet flavors, and curiously, there are quite a few people to actually prefer the paksiw over the lechon itself. 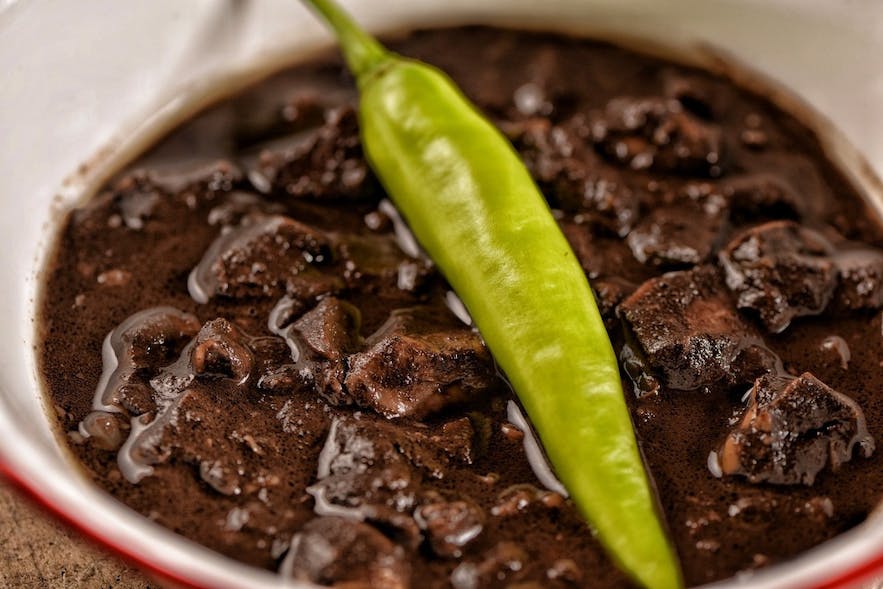 Before the pig is spit-roasted to make lechon, the entrails are removed. These do not go to waste either. The liver is used to make the sweet and sour liver sauce, while the other parts are chopped and stewed with garlic, chilies and the pig’s blood to make dinuguan.

Despite its black color, it is a local favorite served over rice or with a steamed cake called puto. It can be served alongside the lechon during the feast, or it can be served the next day just like the paksiw.

No Filipino Feast is Complete Without Lechon!

People say that when one desires to make a great first impression, one has to put their “best foot forward.” It is easy to infer that perhaps, the same thing applies to cuisine.

Years ago, when renowned chef and food traveler Anthony Bourdain first stepped foot in the Philippines, he was treated to his first taste of lechon. One taste of the crisp skin and the tender meat and he readily declared that the lechon is the “best pig ever.” Adam Richman, of Man vs Food fame, declared in amazement that the lechon skin is “just like candy.”

When it comes to Filipino food, one can hardly be faulted for using lechon to make a great first impression. That’s what it is. One of Filipino cuisine’s best feet forward. Check out food and culinary tours in the Philippines and get a taste of authentic lechon!