El Nido is a municipality on the northernmost part of Palawan Island, Philippines. This municipality sits on Bacuit Bay and is made up of more than 40 islands and islets aside from the main fishing town. Despite its remote location, El Nido is considered one of the most beautiful places in the world and a highlight of many Philippine tour packages.

El Nido is home to not only gorgeous white sand beaches, which are some of the best beaches in the Philippines, and incredible marine ecosystems for Philippines diving, but also several giant limestone karsts jutting from the sea. It is those limestone karsts that give El Nido its iconic seascape. Multiple top online publications have hailed El Nido as one of the best destinations in the world that's why it's also one of the top tourist spots in the Philippines.

Some of the most popular things to do in El Nido include diving, snorkeling, and beach hopping. But one activity that you shouldn’t miss out on is island hopping in El Nido.

How to Book an El Nido Island Hopping Tour 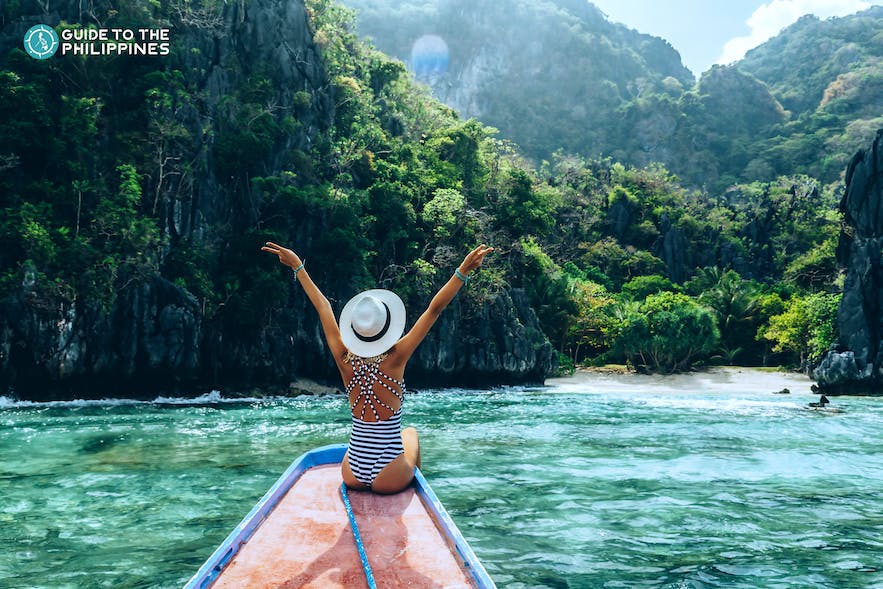 You may pre-book your island hopping tour in El Nido with an accredited tour operator and guide. Several El Nido tours are available on prominent travel booking websites like Guide to the Philippines. Another way to secure an island tour is to book it through your hotel. Some Philippine luxury resorts operating in El Nido include island tours in their offered packages.

Some travelers wait till they reach the island and arrange tours with local operators in the main town. However, for a hassle-free and convenient experience, we recommend you go for an online trip booking in advance especially since pre-booked tours are now part of the El Nido travel requirements to be allowed entry in the municipality. It also allows you to find the best deals. Some of the top deals for island-hopping in El Nido offer all-inclusive packages that include lunch and hotel pickup/dropoff at reasonable rates.

As for the El Nido island hopping tour itself, you can choose one of the two types: private and shared/joiner. When you book an El Nido private tour, it will only accommodate one booking party. If you’re alone or as a couple, a private tour is more expensive, but it will provide a more personal travel experience and you'll be able to maximize your time better. A private El Nido island hopping tour is ideal for big traveling groups because members can share the tour cost.

If you want to pamper yourself and island-hop in style, consider booking our luxury El Nido private island hopping tour to make your holiday more memorable and special.

A shared/joiner El Nido island hopping tour is open to all unrelated or random travelers. This tour is a good option if you want to save some money and is also a nice way to meet new people. 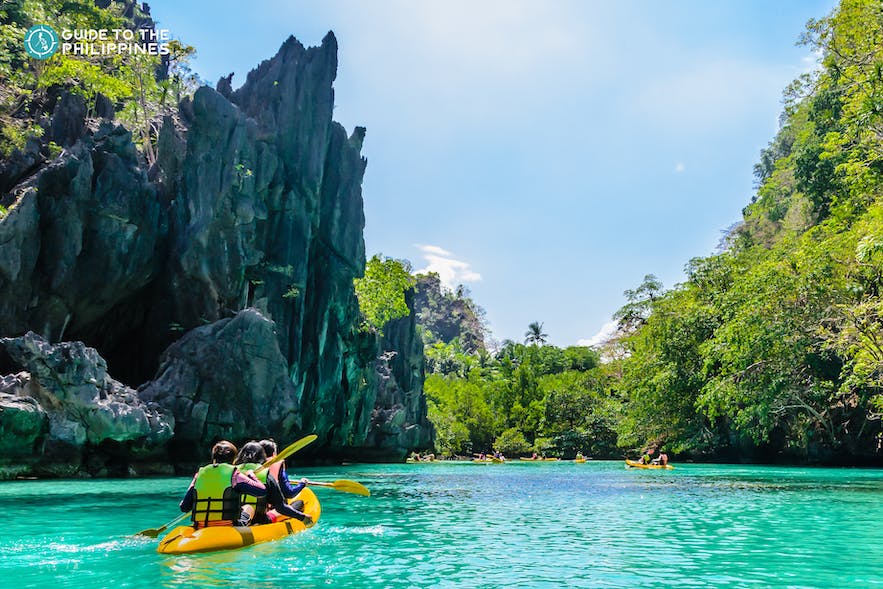 These El Nido tour packages usually include lunch, either seafood picnic style or the boodle fight style. The staff serves lunch at one of the stops of the tour. 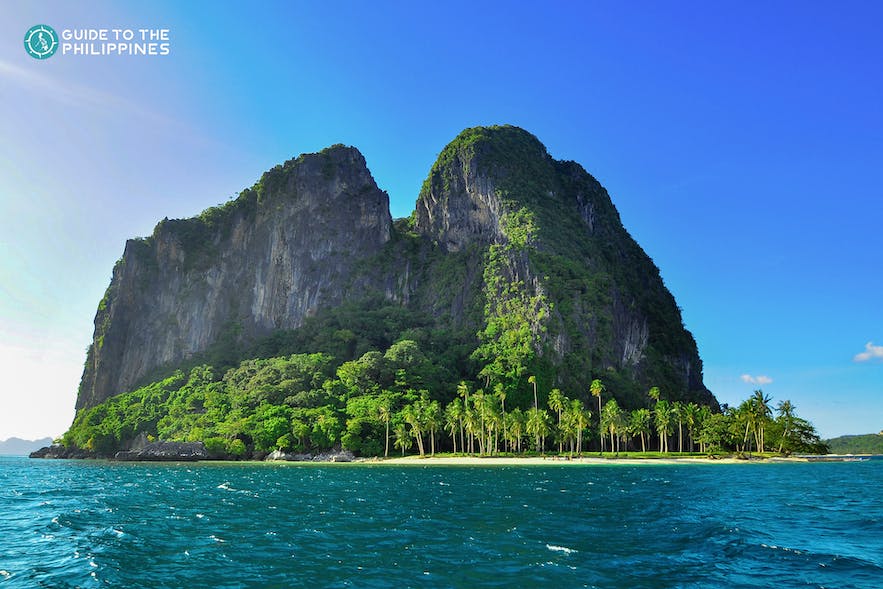 The El Nido Small Lagoon island hopping tour heads to the little water inlet called Small Lagoon, one of the most famous natural attractions in the region. Small Lagoon enchants visitors with its crystal clear water and its towering limestone cliffs. While here, you can swim and snorkel. You can also rent a kayak from local providers for a minimal fee.

The next stop for this tour is the nearby white sandy stretch called Payong Payong Beach on the southern part of Miniloc Island. Here, you can relax on dry land or swim again. It is a good spot to take photos and enjoy the calming ambiance of an isolated island.

The Secret Lagoon is the third destination on this tour. This gorgeous lagoon is named as such because it is hidden from plain sight. You will have to pass through a hole in a limestone cliff to reach this gorgeous sheltered lagoon surrounded by cliffs. 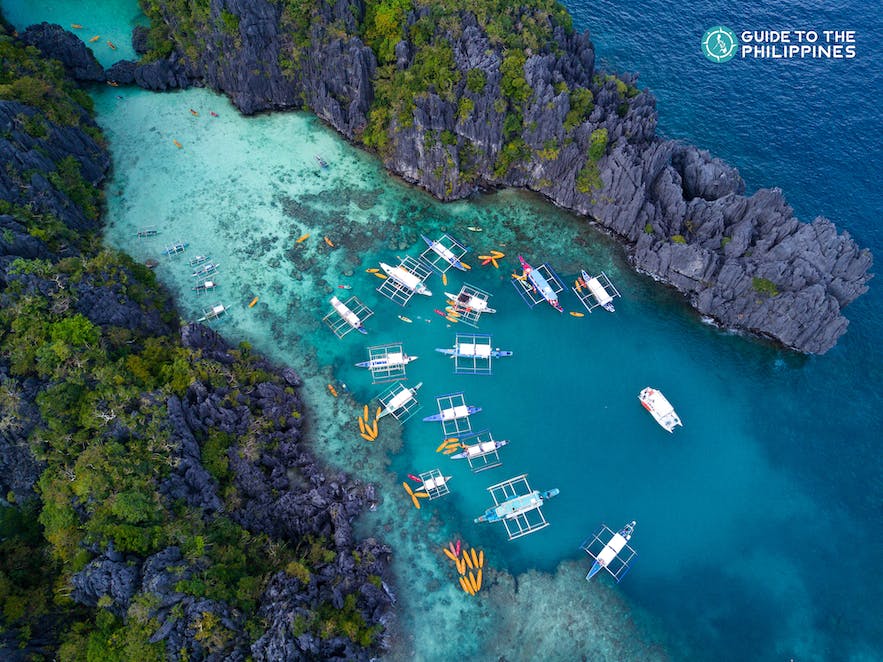 The Big Lagoon Tour El Nido features the iconic Big Lagoon on Miniloc Island. This massive lagoon that stretches more than 800 meters is known for its beautiful clear waters and its limestone karst seascape.

Shimizu Island is the next stop for this tour and is named after a local diver who died tragically. The island features aquamarine waters, limestone cliffs, palm trees, and a white sand beach. While on Shimizu, you can go for a leisure stroll or relax on the beach. The island’s underwater scene offers one of the best snorkeling in El Nido.

The last stop for this tour is West Entalula Beach on Entalula Island. Many travelers consider West Entalula as one of the best beaches in El Nido. This stunning white-sand stretch boasts clear waters and fascinating rocky formations. It is also a great spot for watching sunsets. 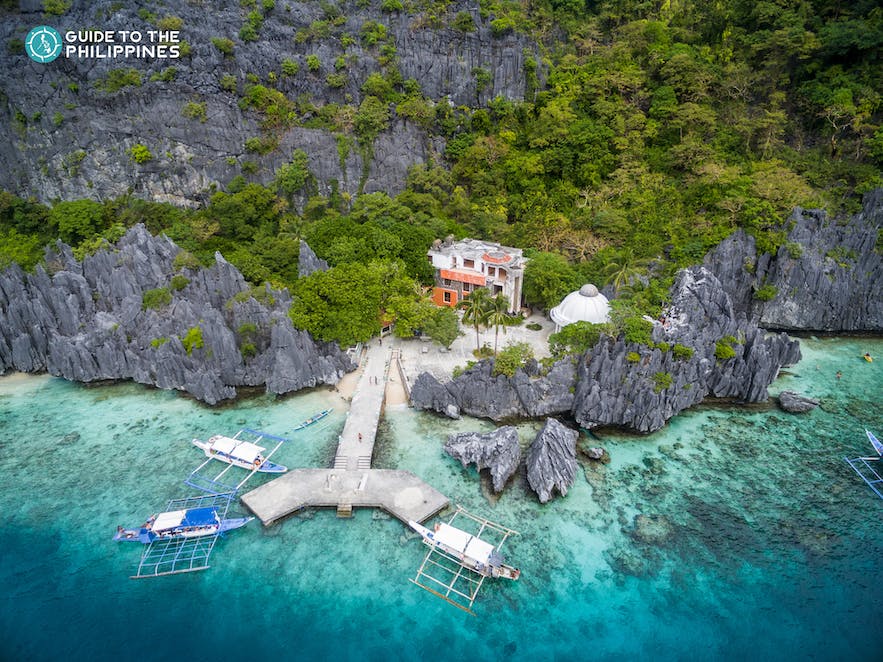 Matinloc Island is the main destination for the El Nido Matinloc Island Premium Island Hopping tour. It is often considered the best island in El Nido Palawan. This is because Matinloc is home to many notable tourist sites in the region.

The first stop for this tour is the island’s historical shrine that comprises an abandoned convent and an old school. When you arrive on the island, you can leisurely walk to the shrine.

On this tour, you will also stop at Matinloc’s Hidden Beach - one of the hard-to-reach spots in El Nido. Aside from its powdery white sand and clear azure waters, Hidden Beach is known for its tranquility and surrounding green vegetation. This beach will give you a castaway vibe. Two large rocks stand in front of this beach and keep it hidden from view, hence the name.

The third attraction in this tour is the Secret Beach - a natural shallow white-sand beach accessible through a hole in a limestone formation. Hidden and Secret Beaches are great places to swim, snorkel, and enjoy the beautiful seascape and geological formations that make these attractions stand out.

If you have more time to spare in El Nido, here are the other island hopping tours that you should consider: 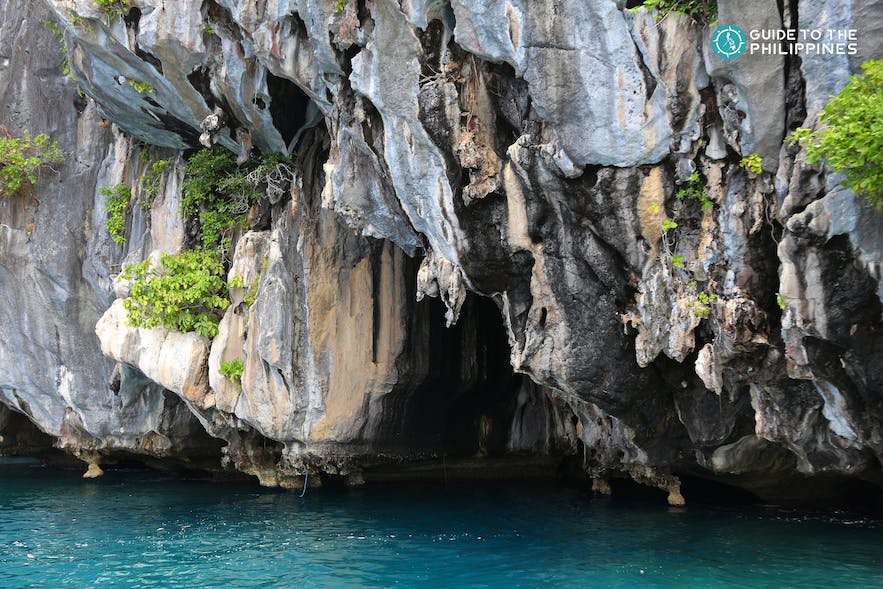 The El Nido Cave Exploration island hopping tour highlights the archeological landmark called Cudugnon Cave, which historians believe to be a burial site for early settlers. Researchers found various ancient artifacts, pottery, and bones in Cudugnon. On your visit, you may enter the cave and admire the stalagmite and stalactite formations inside. A local guide usually accompanies visitors in the cave and gives insights into the history of Cudugnon.

Vigan Island or Snake Island is another stop on this tour. This island, which looks more like a sandbar, is named after its snake-like curvy shape. Strolling along the strip, swimming, and taking photos of the sea views are the usual tourist activities at this attraction.

The third attraction in this itinerary is Cathedral Cave, which is known for its large stalagmites structures and rich underwater environment. On the outside, this cave looks like a large dome of limestone. Although some travelers choose to swim inside the cave, local guides speculate that sea snakes populate the cave's waters. 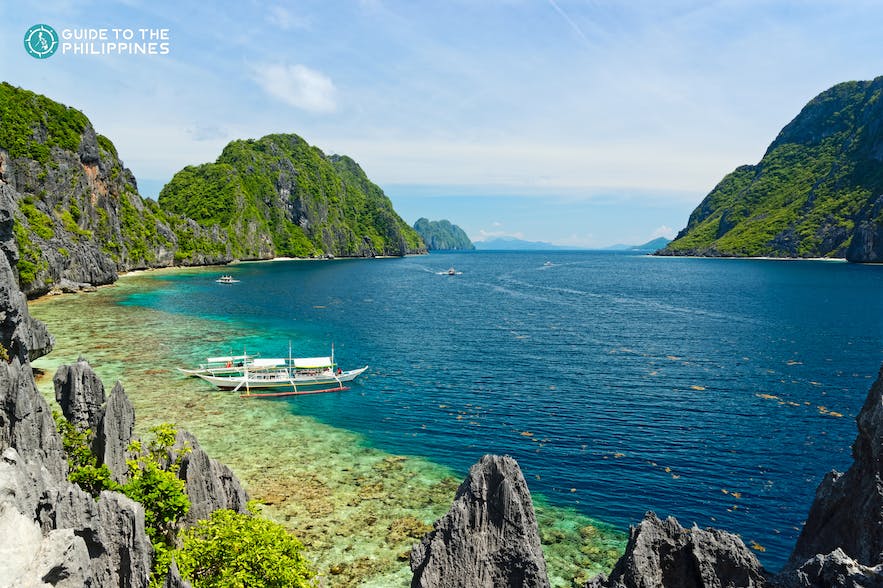 The El Nido Tapiutan Strait island hopping tour focuses on exploring the Tapiutan Strait and its surrounding attractions. After going through Tapiutan Strait, you will stop by Star Beach on Tapiutan Island. This white sandy beach is a fantastic spot to swim, snorkel, kayak, and enjoy the view of Tapiutan Strait. Star Beach is named after the sheer number and wide variety of starfishes in the area.

The other attractions in this tour are also powdery white sandy stretches, Talisay Small and Talisay Beach. As the name suggests, Talisay Small is the smaller one of the two beaches. Both beaches are admired for their unspoiled vegetation, emerald, and turquoise waters, and huge rock formations. These beaches have colorful corals that house hundreds of fishes like clownfish. 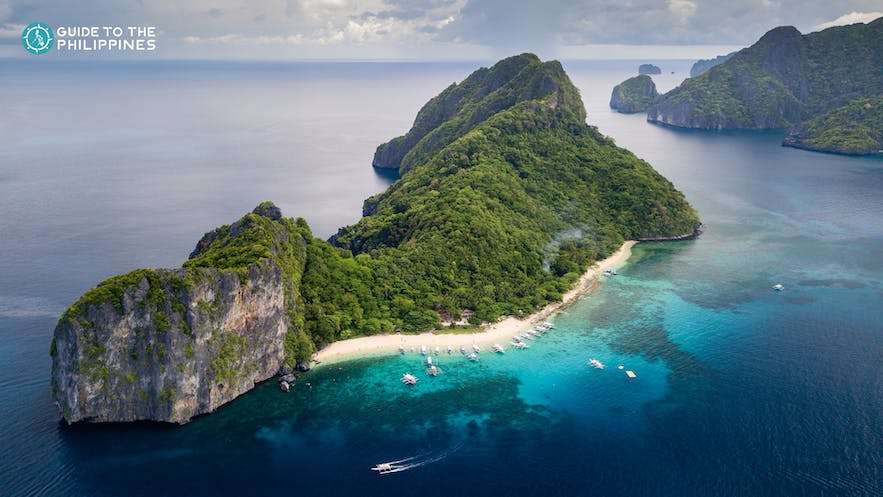 The El Nido Cadlao Channel island hopping tour goes through the Cadlao Channel and features two islands, Cadlao and Helicopter (also known as Dilumacad Island). The name Helicopter may seem odd for an island, but it is called such because of its helicopter-like shape. Helicopter Island features cream-colored beaches, tall cliffs, and green rainforests.

Cadlao Lagoon is one of the main two attractions on Cadlao Island. This lagoon faces Helicopter island and is a lovely spot to swim and snorkel.

The other Cadlao Island tourist site featured in this boat trip route is Pasandigan Beach. Pasandigan is a quiet and serene beach that features clear turquoise waters and plenty of coral reefs. It fulfills the meaning of beach paradise. Helicopter Island, Cadlao Lagoon, Pasandigan Beach are excellent places to swim, snorkel or enjoy sea and cliff views. 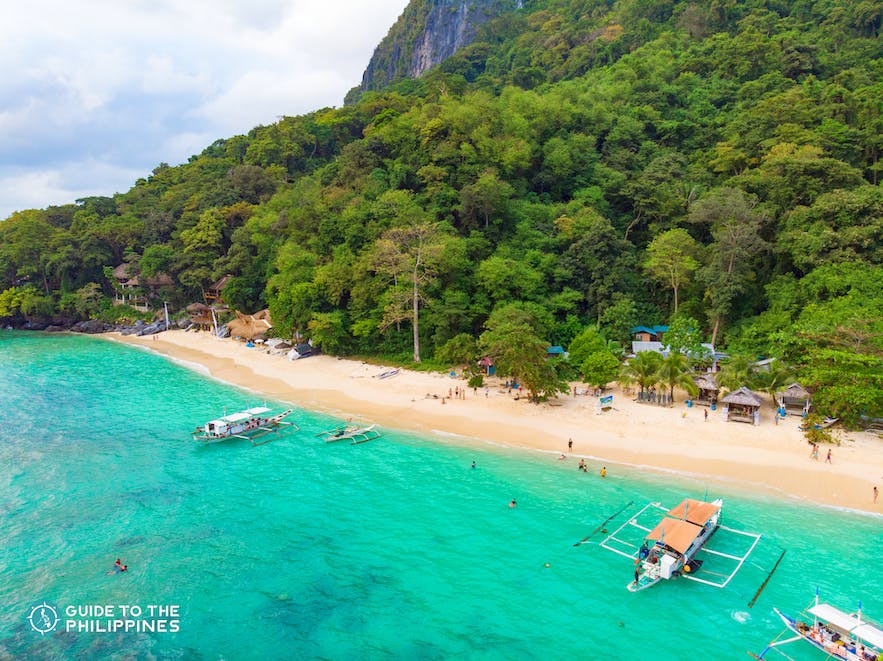 The El Nido History Islands Tour includes the Seven Commandos Beach, one of the convenient places to go for a day trip in El Nido because it is closer to the main town than other attractions. Seven Commandos Island features white powdery sand, hundreds of coconut trees, and towering limestone cliffs shooting straight down to the beach area.

Seven Commandos is a favorite snorkeling spot and home to a turtle population and other underwater creatures. The beach shore has a few shacks lined up that sell coconut. You can ride a swing or play a game of volleyball while here.

Pinagbuyutan Island is the other island included in this El Nido tour. Pinagbuyutan is a quieter and lesser-known island in the region. It is filled with palm trees and has a white sand beach to swim in and relax. You can also snorkel around the coral reefs just a few meters from the island shore.

Before heading back to the main town, this historical island tour of El Nido will also stop at a beautiful sandbar in the area. 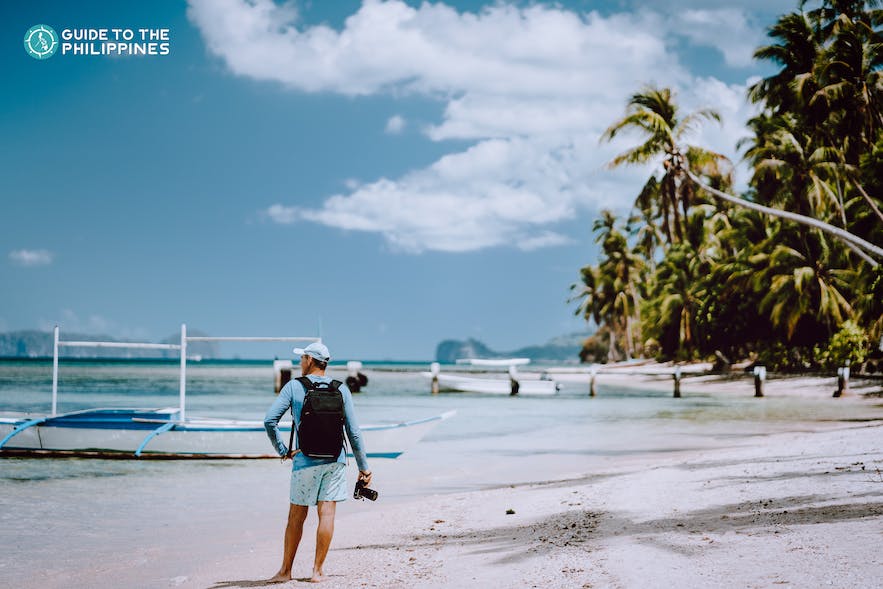 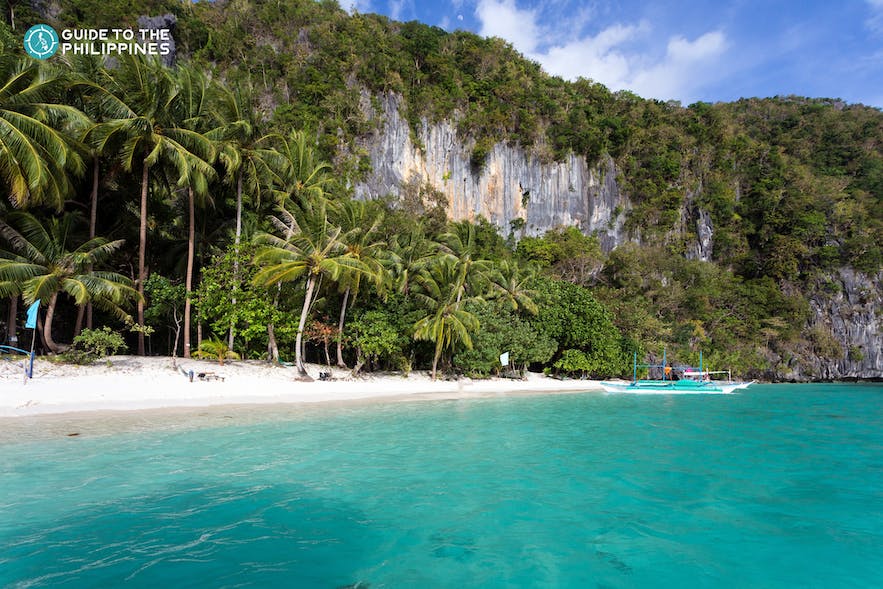 Although El Nido lagoon tours seem to be the most popular, the best island tour in El Nido can vary from person to person as it depends on what you want to see and experience.

There is no shortage of El Nido hotels and resorts  and El Nido restaurants to choose from. Vacation packages for couples in El Nido are readily available, and this Palawan region houses some of the top 5 star hotels in the Philippines.

The next time you tour the Philippines, you should consider visiting Palawan and El Nido. El Nido Palawan tours feature some of the most stunning sites in the whole country.

Here is a list of Philippine guided tours for your next vacation in the Philippines.

Do the Underground River Tour in Puerto Princesa

Do the Bohol Countryside Tour

Swim in Kayangan Lake in Coron