Carbin Reef is a giant, tongue-shaped, white sandbar that is located off the shore of the town of Sagay in the province of Negros Occidental. Established in the 1980s, this tourist destination can be found in the middle of a 32,000-hectare protected seascape called Sagay Marine Reserve.

The reef is actually a marine sanctuary that has a total area of 200 hectares. Above the water, it appears to be an ordinary strip of sand, but down below, it is a world of a wide variety of marine species. Surrounding this sandbar is a crystalline, shallow, turquoise water that adds charm to the place.

Carbin Reef is an unspoiled stretch of sand, so expect no facilities like stores, restaurants, and other structures on the island, though there are several cottages erected to give refuge to the visitors. If all the cabins are occupied, visitors can set up their own tent on Carbin Reef as well.

There are also no snorkeling gears rental on Carbin Reef, so it’s best to bring or rent one before going to the sandbar. Pack your food and garbage bags as well. Since the sanctuary is in the middle of the ocean, carrying sunblock with you may come in handy.

A strip of white sand in the middle of the sea is the ideal setting for fun water and beach activities. One can go for a swim in its transparent and pristine water, or do some sunbathing on its powdery sand.

The most exciting activity one gets to do here is snorkeling; diving is deterred as the water is too shallow. With the presence of glass-like water, it is easier to see the underwater paradise of Carbin Reef, with its thriving coral reefs, large schools of fish, and occasional turtles. 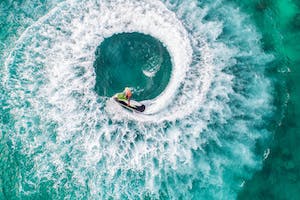