Explore the muck diving spots of Dauin and swim with turtles in Apo Island during your trip to Dumaguete. Learn about the do’s and don'ts when planning your Dumaguete diving trip with this guide.

Dumaguete, the capital of the province, Negros Oriental, and is dubbed as the City of Gentle People. It is also recognized as one of the best places to retire in the world because of its laid-back atmosphere and historical and natural attractions. It is also known for being the jump-off point to diving spots in Dauin, including Apo Island.

Approximately 20km south of Dumaguete is the municipality of Dauin, a peaceful and coastal town whose name was derived from friendly supernatural beings called “Dawinde,” who were believed to reside on a towering tree named “Calawin.”

While Dumaguete and Dauin are different locations within Negros Oriental, their names became almost synonymous to each other under the realm of scuba diving tours for certified divers. 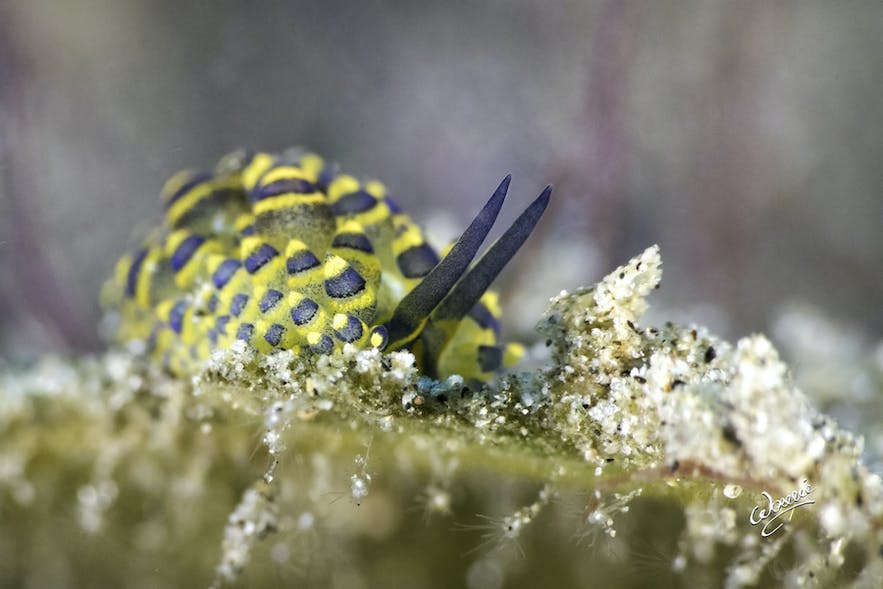 Along Dauin’s shores are 18 popular dive sites, most of which are known to be coral and muck diving for tiny famous critters, some of which are rare to find relative to other places in the Philippines. Scuba diving is the primary industry in this town and it extends all the way to Apo Island, which is part of the Municipality of Dauin’s jurisdiction.

Among first-time muck divers, it may seem that it’s all about this desolate, sandy, and boring place to visit. The thrill is all about finding the rare, weird, and almost alien-like creatures you’ve never seen before, if and if you break their respective camouflage codes right before your eyes!  The gratification is just but overwhelming when they reveal themselves to you.

Let me share with you a few guidelines you should think about when diving these sandy bottoms in search of these camouflaged celebrity critters.

First and foremost, be very, very sensitive about silting the sandy bottom with your fining techniques. It is likely to happen that another diver may be looking at a critter, a quarter size of a grain of rice behind you.  A simple fin kick may definitely silt up the sand together with this small critter. Thus, frog fin kicks are highly recommended. 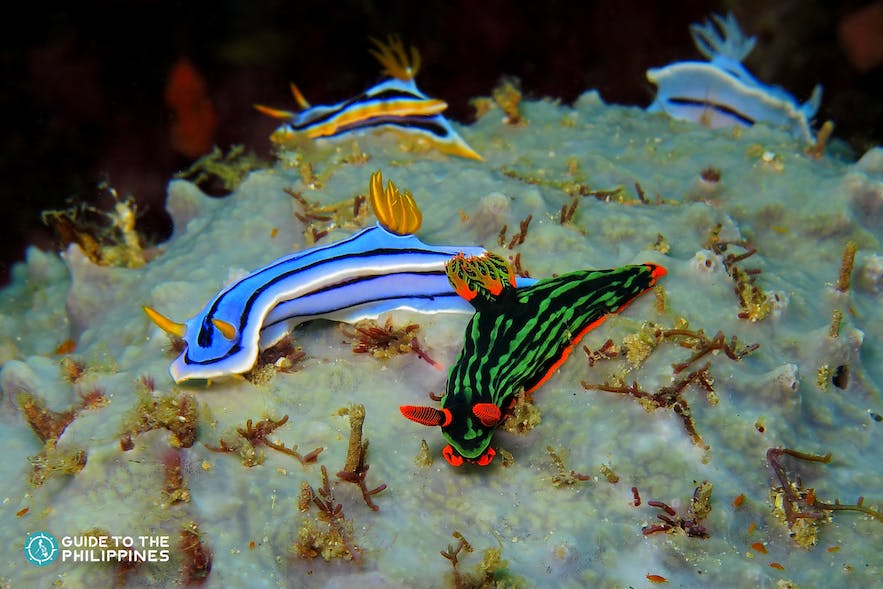 Before you settle down on a position to watch over a critter, please do examine the area around you to make you aware of possible hazards that may hurt you such as sea urchins, stonefish, or even stingrays hiding within thin a layer of sand.  Having to work with a local dive guide will help you find these hiding critters.

Courtesy-wise, it is important to line-up patiently onto a critter that is being observed by another diver, especially if this diver is holding up a camera. There isn’t usually a time limit for this, so please do not take it against those who take too long with a critter. They found it first, anyway. You might as well find another critter in the meantime to maximize your remaining air.

Some dive guides or spotters, who have quite a number of diver guests on a muck dive have their respective searching styles.  The ones I really like are those who find these critters sequentially and put markers along the sand.  So, once you have your fill with one critter, you would simply move to the next marker and motion among your dive buddies that you’re done with yours as a good sign of gesture.

If you happen to be taking photographs of these small critters, make sure to bring a focus light with you.  Other than the part that you may use the focus light to point at creatures, it also helps your camera to focus better through the macro lenses you have.

There are quite a number of “microscopic” critters that Dauin’s muck dives hide, thus, dioptres are mostly useful.  Macro photography makes time go faster than what you think, so please do check your air and deco times, periodically. 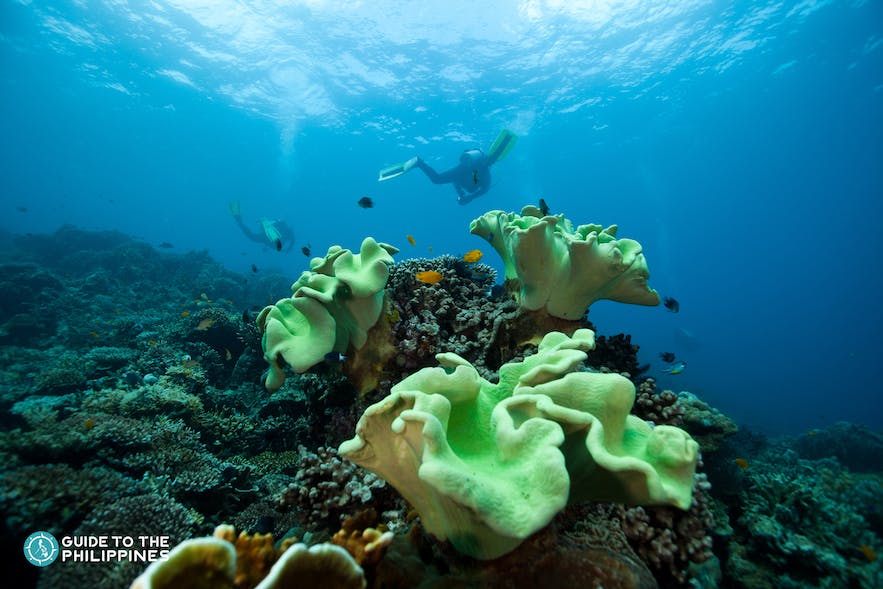 So, once you arrive at a dive resort along Dauin, do inform your respective dive guides a list of critters you’ve been dreaming of to see. In that way, your dive guides are able to make an itinerary of dive spots to visit and uncover your critters’ camouflaging secrets right before your eyes. 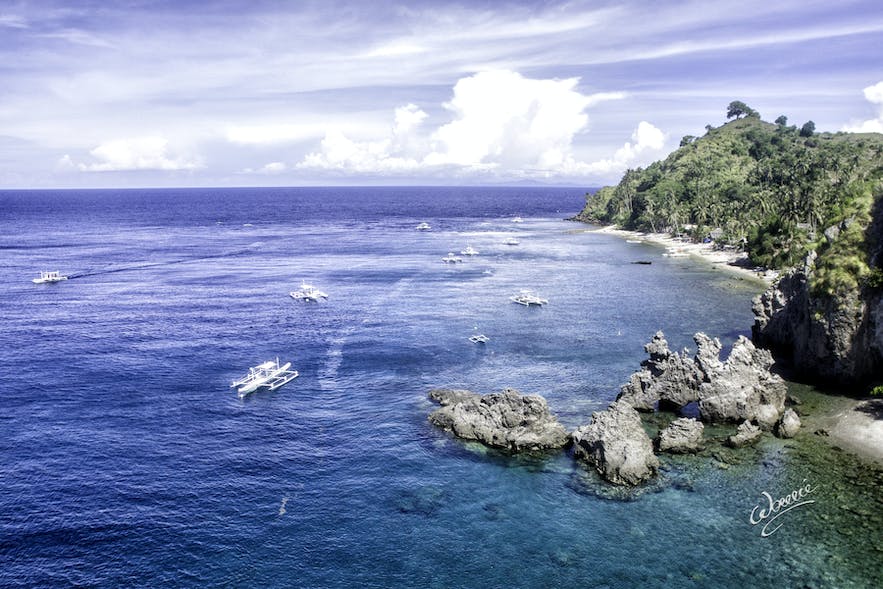 Approximately 10km south-east off of Dauin, is Apo Island, a marine sanctuary organized by its local community. It usually takes about 30 minutes by Dumaguete’s boats to bring you from the usual jump off point within Dauin to Apo Island.

Visiting Apo Island displays a great contrast from Dauin’s magnificent muck dives as you’ll see over 400 coral species where over 650 species of fish reside. Since it’s a marine sanctuary, there is an entrance fee at its registration office meant to help protect and maintain the island.

As you go around the island, expect to see volcanic rock formations, but don’t miss its iconic one that is most obvious as you approach the north-eastern side of the island from Dauin called Boluarte Rock of Apo Island.  Apo Island has 9 dive sites around it, here are some of the must visit: 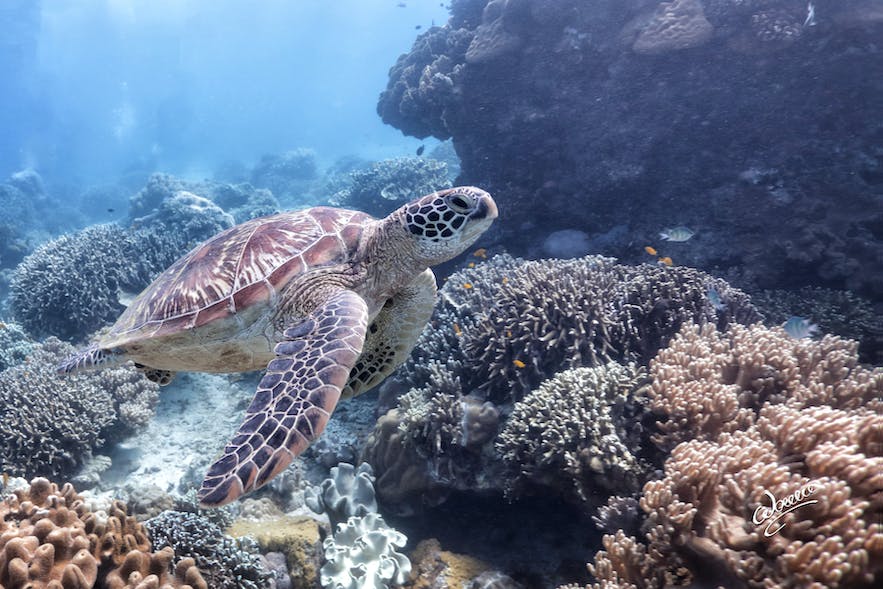 At Apo Island’s south-western side is the Rock Point West, where you’ll experience a wide coral garden just within 5 meters of depth that eventually slopes down to 20 meters.  here are snappers, butterfly fish, groupers, frogfish, nudibranchs, and sea turtles.

Among the many sea turtles I have met, those found within the vicinity of Apo Island, are the friendliest.  It has most likely to do with the entire island being a marine sanctuary since the 1980s.  We, as scuba divers, seem to show no threat among any of them. In fact, I had the chance to swim with one for over 5 minutes, until it felt it had wanted to sleep.

At any given dive I had with them, I would witness them breach, swim, eat, and sleep. While they may be the friendliest, please do your part never to touch them, like any other marine life.

Such creatures rely on bio-films, a protective slime, to keep out of infection.  uman contact simply compromises these bio-films, making them vulnerable to harmful bacteria.

Another area of interest by the west side of Apo Island is the Mamsa Point.  “Mamsa” is a local term for Giant trevally, but what you’ll normally find in this dive site are schools of the bigeye trevally.  Seasoned divers are much welcomed in this area due to its strong currents.

It always is pleasing to watch a school of bigeye trevallies because of the glistening, bullet proof like, silvery skins they have against the rays of the sun.  It also is exhilarating to be surrounded by them in a vortex and get mesmerized looking among their big eyes.

Just be mindful of your depth and your distance from the reef periodically.  The currents may push you all the way out into the blue without you having to notice it. 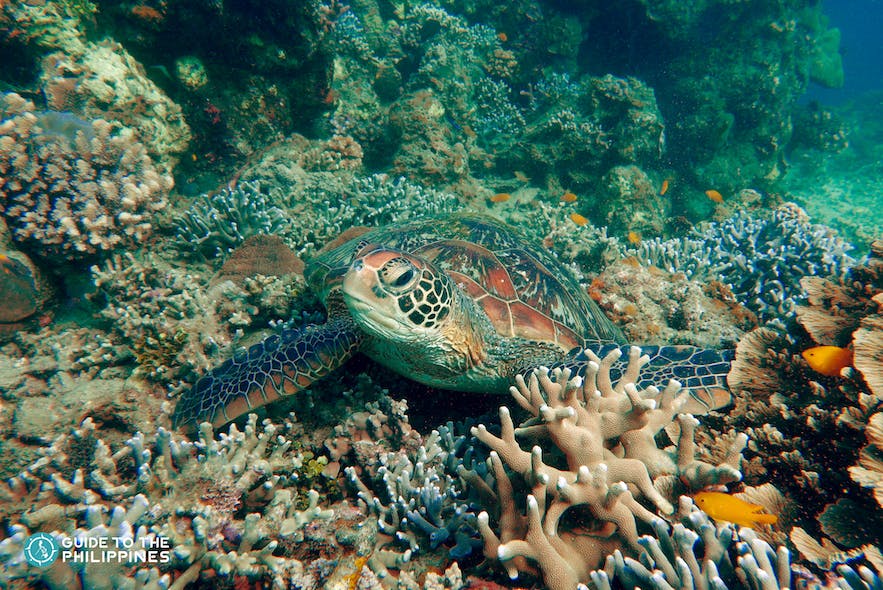 The Marine Sanctuary, one of the first official marine sanctuaries of the Philippines, is found south-east off of Apo Island.  Only a maximum of 15 divers are allowed to visit on a daily basis.  So, if you want this visit a part of your itinerary, please do coordinate this well with your dive operator.

Like most marine sanctuaries with limited visitors, you will be amazed by the diversity and growth of the corals, shown off to you by its sheer collage of colors.

Off of the west side of the island is Katipanan, recommended as one of the best beginner diving Philippines since it barely has any current.  There are sea kraits and sea turtles along the sandy reef with healthy patches of corals. 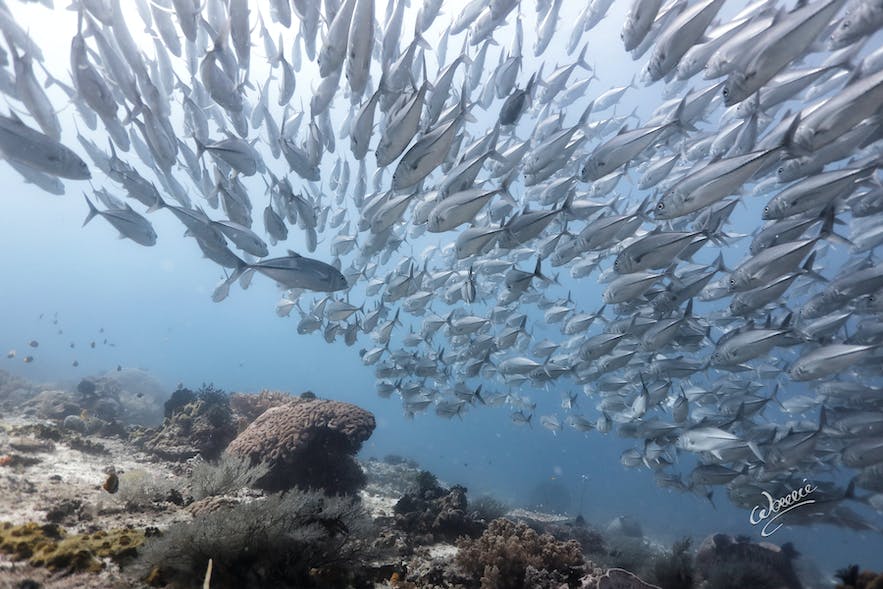 On the north-eastern part of the island is Cogon Point, another great site among seasoned divers.  It is a good drift dive to see schools of jacks, sweetlips, and sea turtles.

At the northern tip is Coconut Island, sometimes referred to as the “Washing Machine.”  It is dubbed as the best drift dive within the area.  Down below is a large wide slope that tapers down to about 25 meters.  There are schools of snappers, jacks, batfish, and even anthias. There are sightings of larger marine life such as reef sharks and rays when currents are strong. 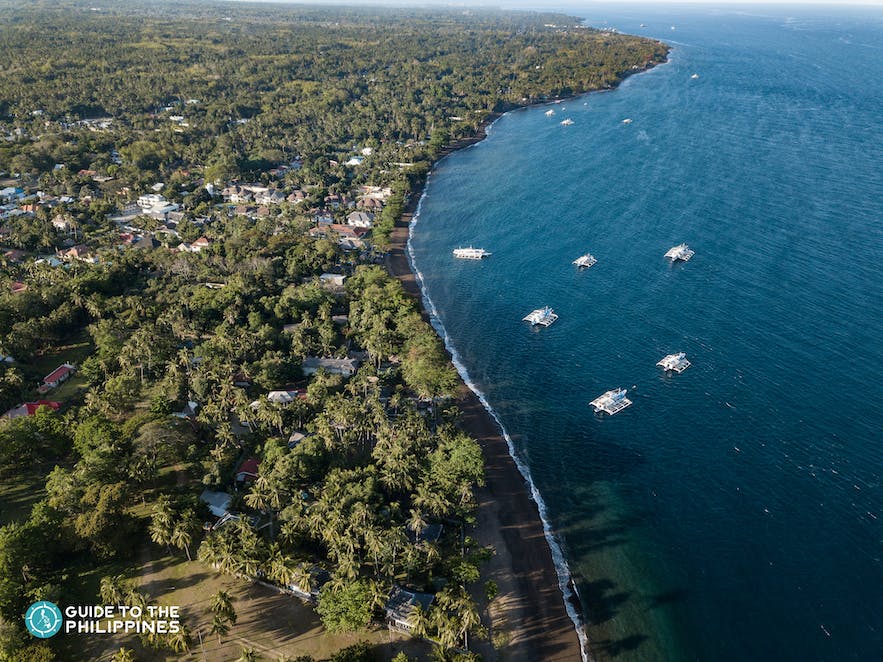 When visiting Dumaguete, both Dauin and Apo Island, should be on your dive itinerary.  You may opt to stay in either and visit the other via boat or stay in one of them and then move to the other later on, if your length of stay permits.

Both locations would have all the basic needs for scuba diving except that Apo Island may have limited electricity due to its isolation.

Check out Dumaguete tours that you can add to your travel itinerary. Check out other reasons why you should visit the Philippines