Sinulog Festival in Cebu: Everything You Need to Know

By Aleah Taboclaon
Verified Expert
Jump to chapter
IMPORTANT: The destinations featured in this article may have COVID-19 travel restrictions and requirements. Check our Cebu travel guide for the travel requirements.

Experience the vibrant and fun-filled Sinulog Festival in Cebu every January. Learn about its origin and cultural significance. Find out more information about this unique tradition below.

Sinulog Festival or Santo Nino/Sto. Nino Festival in Cebu is an annual religious and cultural festival. The festival is thought to be the first of the most well-known festivals in the Philippines.

It also attracts between 1 to 2 million visitors from all over the country every year and gives travelers the opportunity to join Cebu tours and explore the many attractions of the province. Visitors from across the world will also benefit from making Sinulog Festival and Cebu the gateway to their Philippine trip.

Whether you're a first-timer in Cebu or a repeat visitor, the festival will be a memorable experience. Just remember to book with hotels in Cebu City in advance as they get fully booked fast during this season. You can also book Cebu tour packages that already include airfare, accommodations, hotel transfers, and more for a hassle-free vacation.

Besides the religious part of the celebration, Sinulog is also well-known for its street parties before the day of celebration and during the day of the festival. Read on to learn more Sinulog Festival information if you're planning to experience this unique cultural activity in the Philippines.

Sinulog is held in celebration of one of the country’s most famous historic relics: the Santo Niño de Cebú. This was the statue of the baby Jesus that was handed to the Rajah Humabon of Cebu by the Portuguese explorer Ferdinand Magellan in 1521.

This was one of the most important events in the religious history of the Philippines as it paved the way to the birth of Christianity in the country. 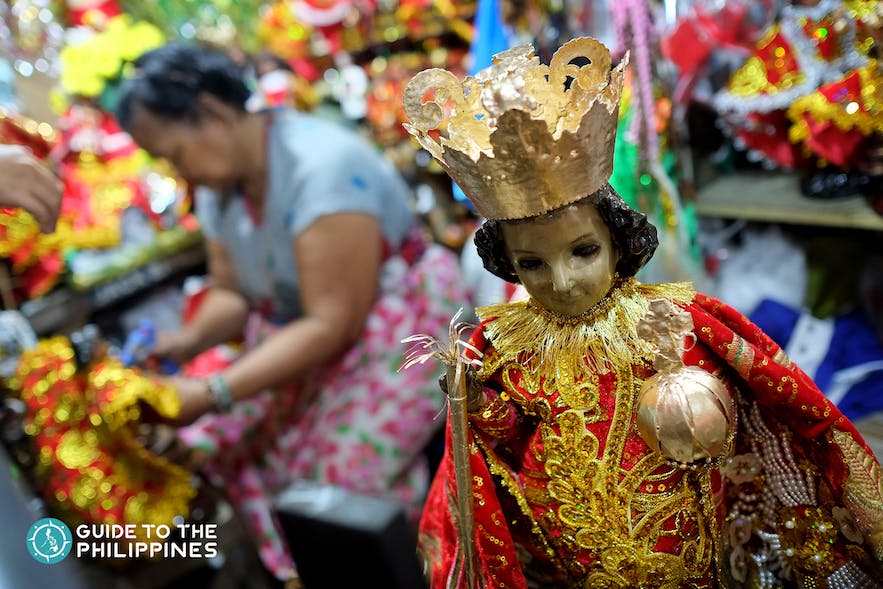 At the moment of receiving the holy image, it was said that Queen Juana, the main consort of Rajah Humabon, danced with joy holding this image of the child Jesus.

The Sinulog dance steps are also believed to originate from Baladhay, Rajah Humabon's adviser. When Baladhay got sick, Humabon ordered his tribe to bring Baladhay into a room where the Santo Niño was enthroned.

After a few days, Baladhay was heard shouting and was found dancing by the native tribe. Baladhay was asked as to why was he was shouting and dancing. He pointed at the image of the holy Jesus and explained that baby Jesus was tickling him.

In turn, Baladhay danced with the little child and explained that he was dancing the movements of the river. To this day, the two-steps forward, the one-step backward movement is still used by Santo Niño devotees who believe that it was the Santo Niño's choice to have Baladhay dance. 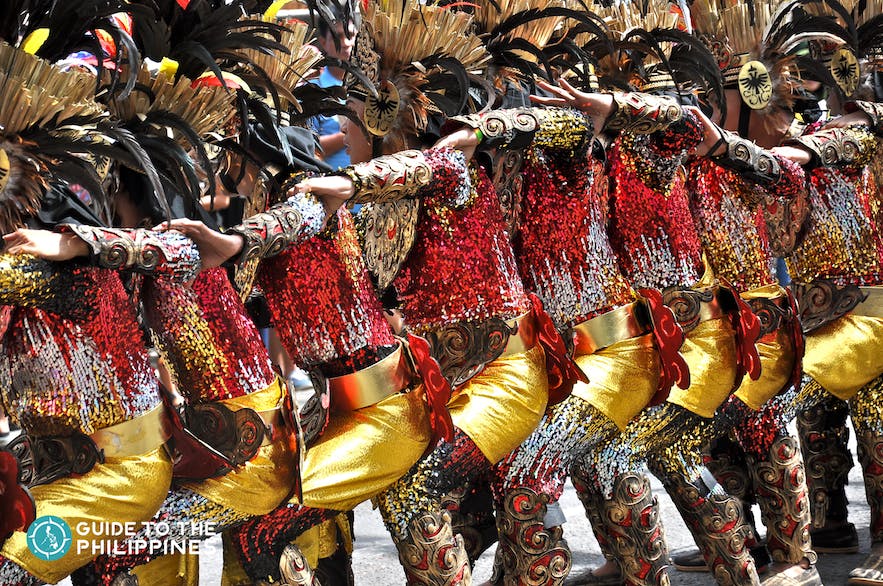 Sinulog comes from the Cebuano word “sulog” which means “like water current movement” which depicts the forward-backward step of Sinulog dance.

Sinulog Festival is held every third Sunday of January in Cebu City.

What to Expect: What is Sinulog Festival all about? 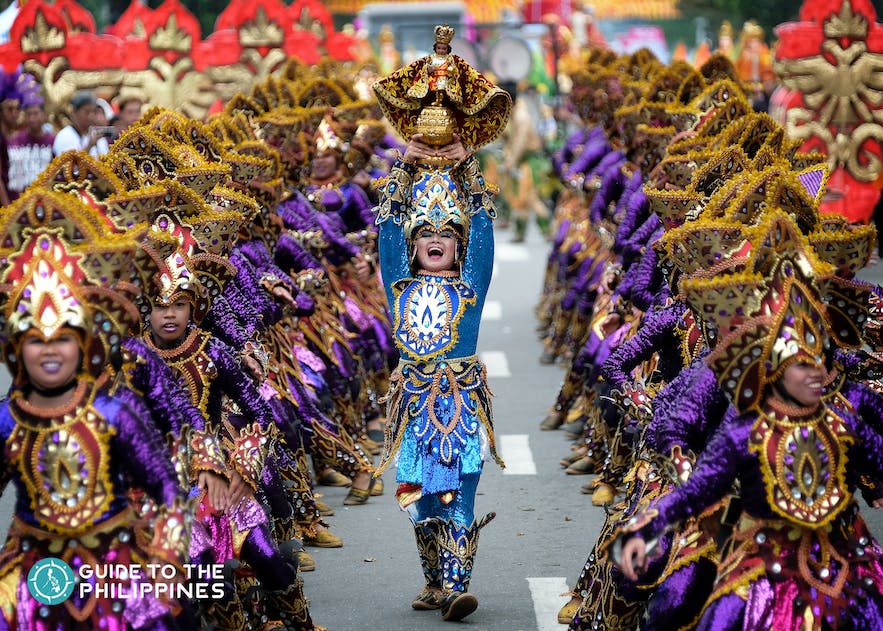 The Grand Street Parade, which is the focal event for Sinulog Festival, normally starts on the third Sunday of January at around 8 or 9 in the morning. On Sunday night, there are pyromusical shows that will treat you to a beautiful display of fireworks. There are also a series of fun events organized days and weeks prior to the main festival.

Things to Do during Sinulog Festival in Cebu

Prior to and after the main parade, street parties are everywhere in Cebu during the evening. So join the locals, get your face painted and get a beer shower. 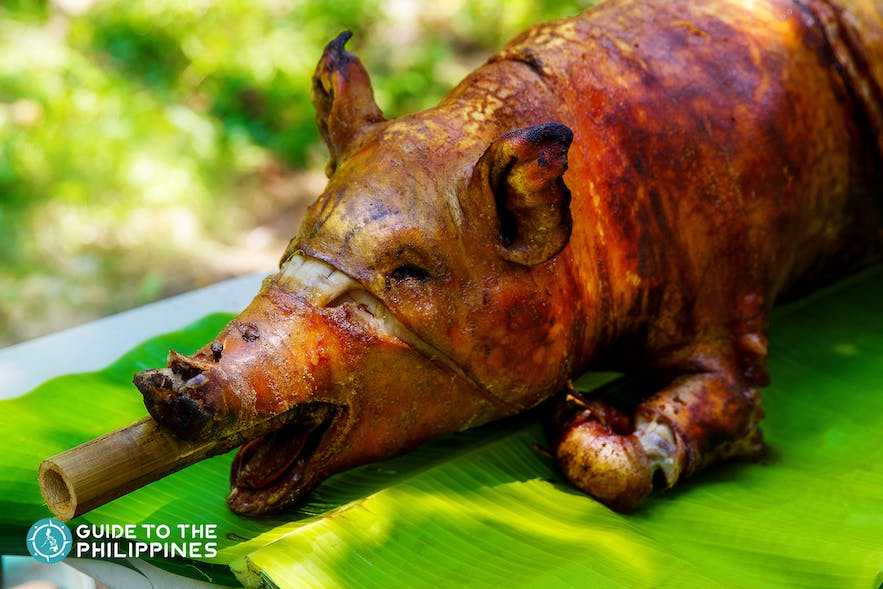 Cebu is one of the best places in the Philippines to enjoy Filipino foods. From the famous Lechon, rumba, b-ami or Puso, you will for sure enjoy the local delicacies at Cebu restaurants. You can also check out Cebu halal food restaurants. 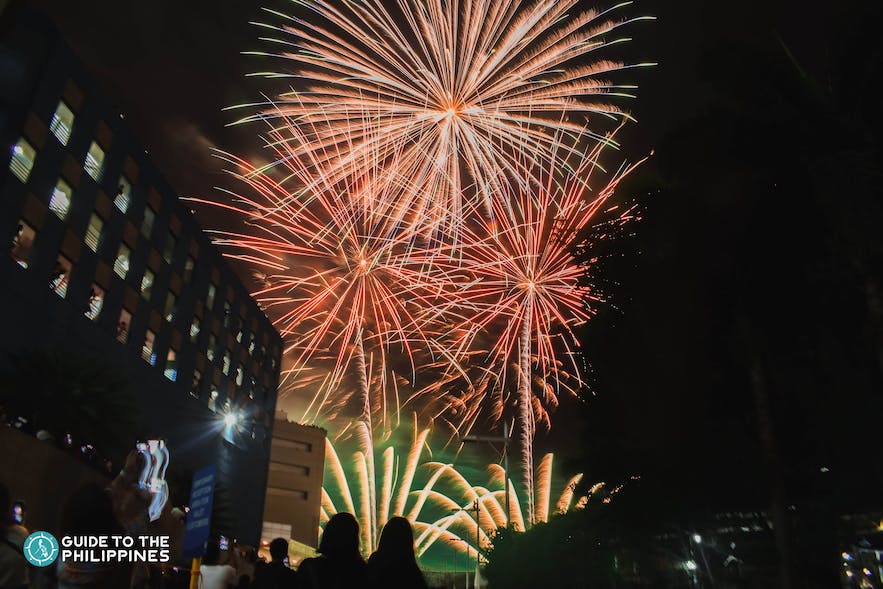 Join the grand finale of Sinulog festival with a bang by watching the fireworks display in the evening. 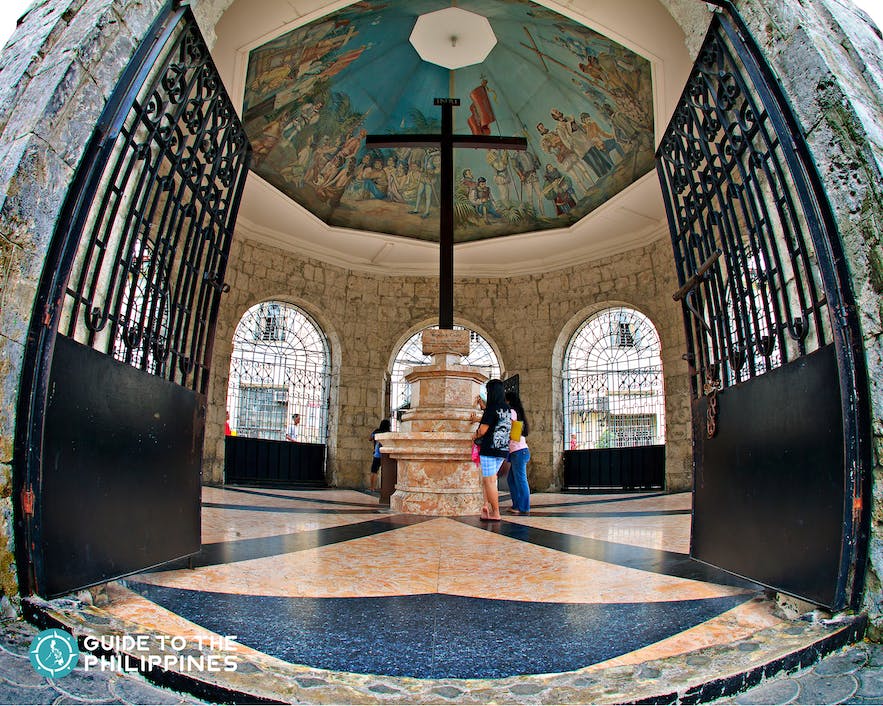 Cebu is known for its history. So take a night walk from Basilica Minore del Santo Niño to Magellan’s Cross, offer a candle and prayers while learning about the colorful history of Cebu. Join a sightseeing tour, historical tour, or pilgrimage tour that you can add to your Cebu itinerary. You can also opt for a Cebu car rental if you want to explore Cebu City and other destinations in the province on your own. Thousands of devotees join the fluvial parade or a parade done through boats. This fluvial parade starts at around 6 in the morning while the solemn procession normally starts in the afternoon.

Kaplan is a smaller festival but part of Sinulog celebration. In Kaplag, the actors and actresses re-enact the Baptism of Queen Juana and Rajah Humabon as Catholics, including the moment when Magellan gave the image of the Santo Niño as a baptismal gift to the Queen.

Cebuanos are also known for their vocal talents. So find a free concert and watch the Cebu’s finest talents impress you with their amazing voices.

Enjoy the beaches of Cebu

Since you’re already in Cebu, visit the top beaches around the province. If you have more time, you can also go to Mactan, Bantayan Island, Malapascua, Moalboal, and Oslob where there are heaps of pristine white sand beaches to lounge in or join Cebu island-hopping tours. If you want to explore the island's waters, you should also check out Cebu's top dive spots. 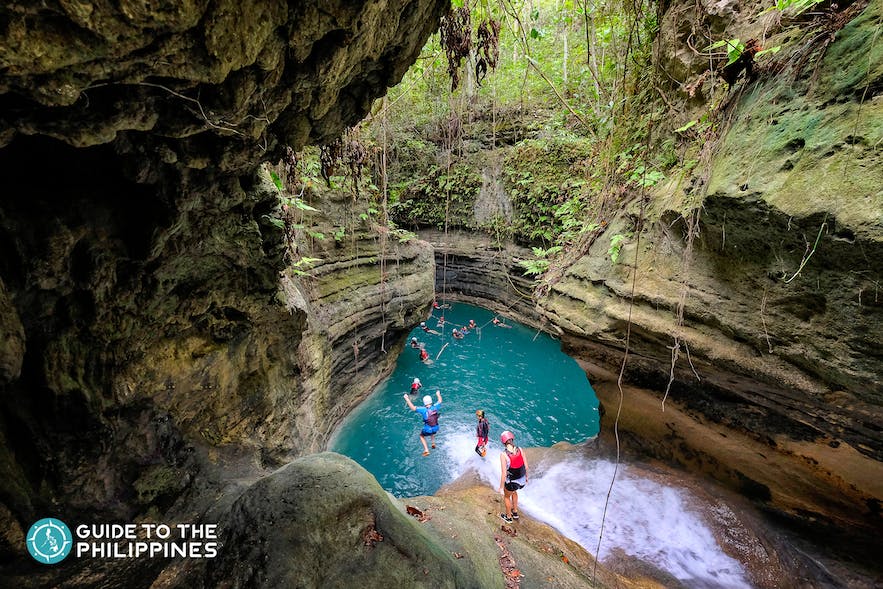 Cebu is also home to adrenaline-pumping activities amidst a stunning nature backdrop that are popular in Philippine tour packages, like tours to Kawasan Falls, which you can also explore by joining a canyoneering tour. For divers, you can do the sardine run tour at Moalboal, or go on a Mactan island hopping like a day tour at Hilutungan Island and Nalusuan Island where you can go snorkeling and diving in Cebu.

Shop till you drop

Aside from the sales in the shopping malls in the province such as SM City Sea Side and Robinsons Galleria, there are also several factory outlets in the city that sell branded items for a fraction of the price. 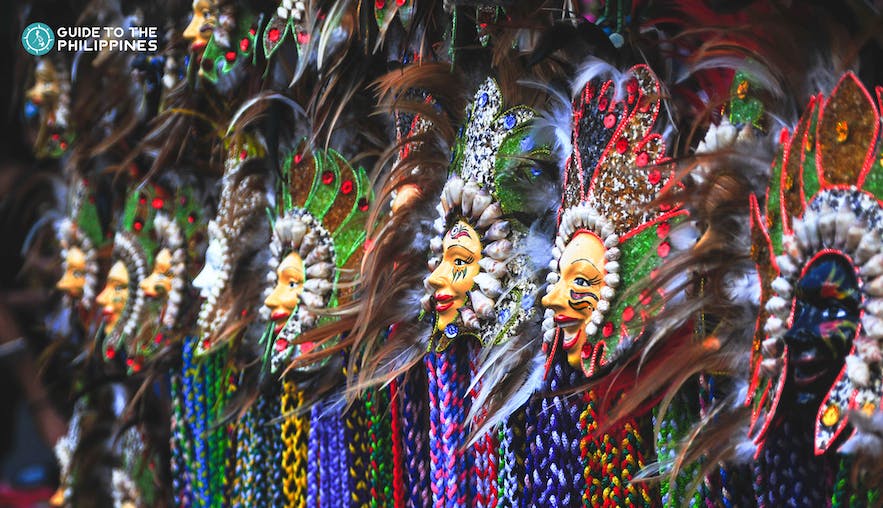 Aside from the Sinulog Festival, Cebu has a lot of tourist attractions and activities in store for you. Start planning your trip by looking into Cebu tours and activities that you can add to your itinerary. You can also check out our list of the nearby destinations you can visit from Cebu. Check out other reasons why you should visit the Philippines

Since Cebu is one of the main transportation hubs in the Philippines, you can visit other top Philippine destinations from Cebu.

You can visit the neighboring island province of Bohol, just a ferry ride away and is known for being home to the iconic Chocolate Hills. Check our Cebu-Bohol itinerary guide to help you plan your trip.

If you have more time and budget to spare, you can do a Cebu-Boracay trip to visit the famous White Beach of Boracay Island, or go surfing in Siargao and follow this Cebu-Siargao itinerary. Cebu also now has direct flights to the reopened Baguio Loakan Airport in North Luzon, where you can enjoy the cool breeze and slurp hot strawberry taho and go on a picnic at Baguio's nature parks like Camp John Hay where the popular The Manor hotel in Baguio is also located.

Check out our Cebu to Baguio itinerary, Cebu to Siargao itinerary, and Cebu to Dumaguete itinerary if you're looking to explore more top destinations from Cebu.