Looking for the best hotels in Manila will have you selecting from stylish hotels that include architectural icons teeming with history to ultra-posh modern 5-star Manila hotels all brimming with grandeur, style, and luxury.

Manila hotels offer a fusion of the past and the present, reflecting the rich history of the city that you can experience in Manila tours.

Here are the 10 best hotels in Manila (and nearby Metro Manila cities) based on location, proximity to the airport and top Manila tourist spots, facilities and amenities, and cuisine including the best 5-star hotels in the Philippines. 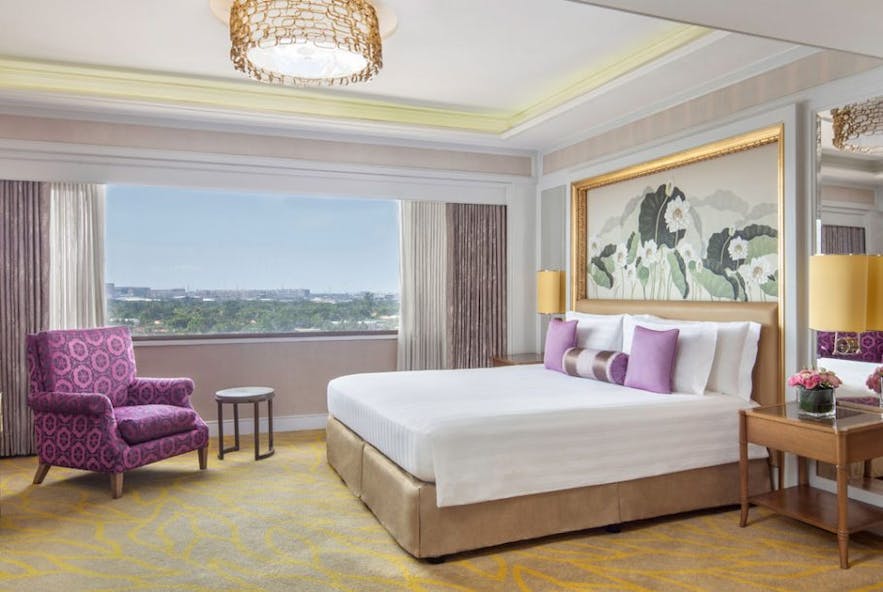 A picture of an oasis in the middle of Makati, one of the premier financial districts in the Philippines, Dusit Thani remains a classic favorite that has adapted to the changing whims and desires of luxurious travelers and guests.

Stylishly incorporating a combination of heritage, luxury, and comfort in the design of its 500 exquisite rooms and suites, Dusit Thani also brings the signature Thai hospitality of its brand with a dose of Filipino friendliness.

The hotel's opulent in-house restaurants such as The Pantry, Benjarong, and Umu serves an array of dishes covering all the flavors of global cuisine. Dusit Thani also has all the features one would expect from a 5-star hotel like function rooms and lounge, conference rooms, fitness center, spa, rooftop lounge, outdoor swimming pool, and more.

Dusit Thani is within walking distance of top shopping malls in Makati, around 7.5 KM from Intramuros and other top Manila tourist spots, and 7 KM away from Ninoy Aquino International Airport (NAIA) or Manila Airport. 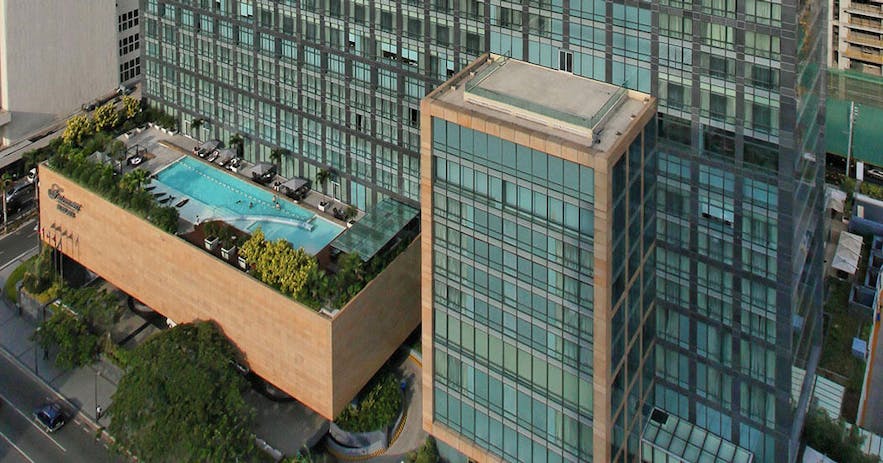 A marvel of modern architecture towering 30-storeys high over the Makati skyline, Raffles Hotel embodies the Raffles brand made famous globally by its original property in Singapore. Mixing traditional charm and contemporary sophistication, the design of the hotel's 32 spacious suites brings out the real meaning of luxury comfort at its finest.

With a roster of restaurants that may resemble a "Where to Eat in Metro Manila" list, Raffles Hotel Makati's in-house restaurants like Cafe Marcon, Fairmount Lounge, Mireio, Spectrum, Mistral, Long Bar, and the Writer's Bar all offer culinary masterpieces. Don’t check-out without experiencing a different kind of pampering at the hotel’s Willow Stream Spa.

Staying at the Diamond Hotel Manila will let you have the best view of the magical Manila Bay sunset. Located in the part of Roxas Boulevard where it's mere walking distance away to many interesting landmarks and cultural sites, Diamond Hotel boasts of fine 5-star features and amenities.

Diamond Hotel is 9 KM away from Makati, 1.5 KM from the Cultural Center of the Philippines (CCP), 1.5 KM from Luneta Park, and 8 KM from NAIA. 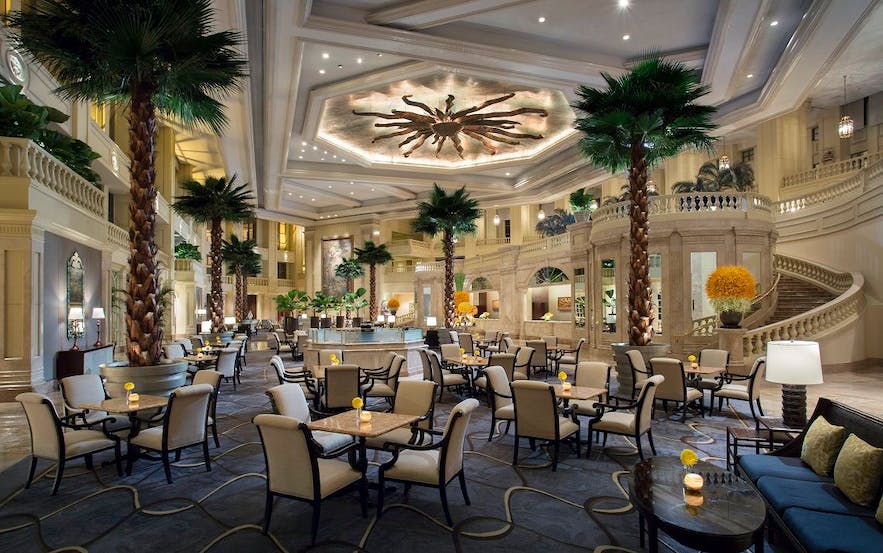 Photo by The Manila Peninsula

Part of Hong Kong's famed chain of Peninsula Hotels, the Peninsula Manila was built in 1976 and was then the first Peninsula property opened outside the territories of China. Today, after four decades of delivering luxurious opulence to its guests, it remains as one of the symbols of Philippine hospitality.

Housing a total number of 469 rooms and 46 suites—all renovated to keep pace with modern designs—Peninsula Manila is also known for its architectural gem of a lobby that best represents Manila's glamor character.

6. Shangri-La at the Fort Manila (Taguig) 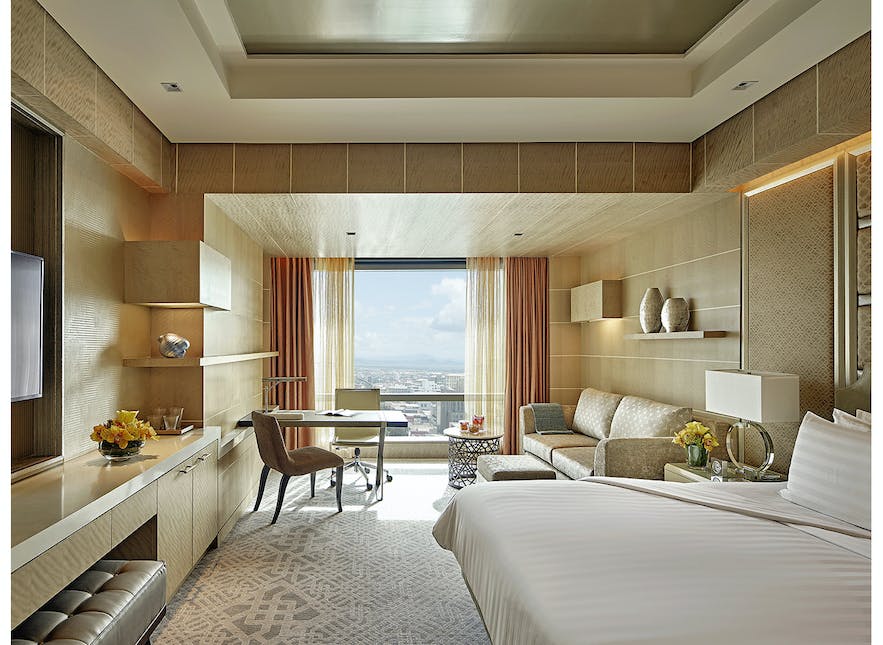 Photo by Shangri-La at the Fort Manila

There are three Shangri-La Hotels in Metro Manila all providing luxurious and sophisticated accommodations. However, Shangri-La at the Fort stands out because of its sheer number of wonderful amenities that include the largest indoor fitness center in the Philippines, the Kerry Sports Fitness Center.

Situated at the lifestyle district in Taguig, Shangri-La at the Fort features 576 modern and spacious guestrooms and 97 serviced residences ranging from one, two, and three-bedroom spaces.

As a popular choice not only for travelers but also for business travelers, Shangri-La at the Fort features conference halls such as the Grand Ballroom that can accommodate 1,200 guests, the Bonifacio Hall which can fit up to 720 guests, and 19 other multi-function rooms.

For some downtime, there’s an outdoor pool for you to relax under the sun and for food connoisseurs, the hotel’s dining choices like the High Street Lounge, Canton Road, Raging Bull Chophouse & Bar, Samba, Sri Lanka's Ministry of Crab, and Raging Bull Burgers will surely satisfy all your gastronomic cravings. 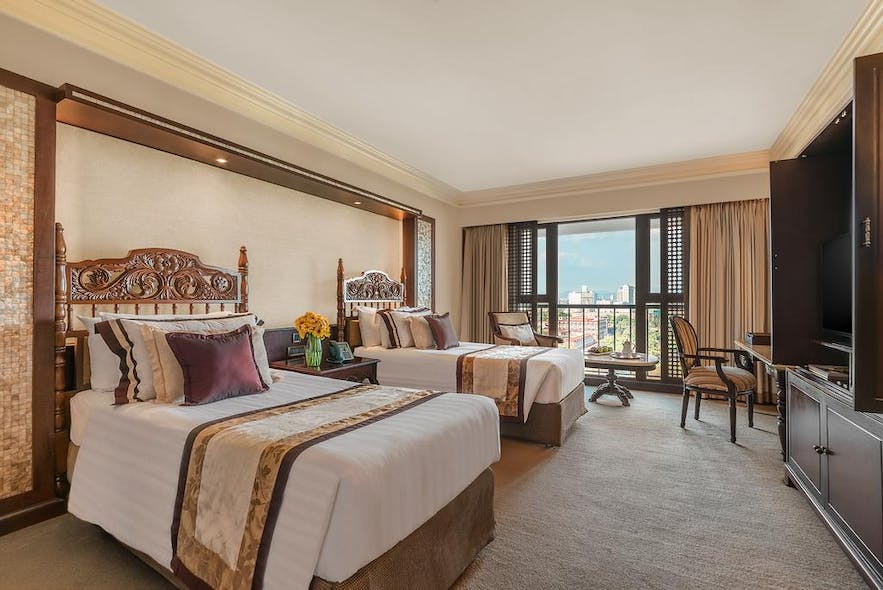 Photo by The Manila Hotel

The most historic hotel on our list is the famed Manila Hotel. This 570-room is also the oldest 5-star hotel in the Philippines built in 1909. Heavily damaged during WWII, Manila Hotel underwent a renovation which was designed by National Artist for Architecture Leandro Locsin. The result is a timeless icon set near Manila Bay.

The hotel's Grand Deluxe and Superior Deluxe Rooms all come with loaded features guaranteeing a comfortable stay. If it's possible, try to experience spending a night at the many suites that include the MacArthur Suite—where the great General Douglas MacArthur stayed from 1935-1941—and the Presidential Suite.

Manila Hotel has all the features of a world-class 5-star hotel plus the dining options present a medley of mouth-watering cuisines at Cafe Ilang-Ilang, Champagne Room, Red Jade, Courie Grill, Tap Room, Pool Bar and the Manila Hotel Lobby Lounge.

Manila Hotel is 0.6 KM from Intramuros, 1.5 KM from Manila Cathedral, 1.0 KM from the National Museum and 8 KM from NAIA. 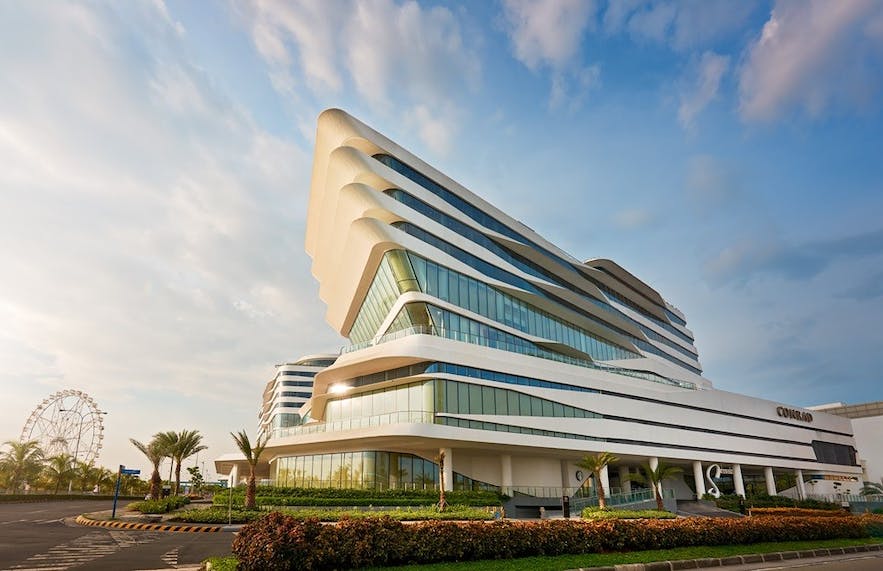 Featuring sweeping views of the Manila Bay and lovely corners adorned with intricate patterns and designs, Conrad Hotel is a picture of architectural wonder. Perched on the waterfront, the exterior of the hotel summons a vibe of a yacht setting out on the open sea.

Inside, one is forgiven to mistake it for a museum—thanks to the more than 700 pieces of artworks displayed all over the property.

Guests of this hotel near MOA (Mall of Asia) can choose from the 347 well-appointed guest rooms and suites all equipped with modern controls and furnishings screaming of extravagance.

Conrad's Hotel's award-winning dining options China Blue, Brasserie on 3, Sails Pool Bar, and Bru Coffee Bar along with the world-class wellness service at the Conrad Spa are sure to make your stay a more pleasant one. 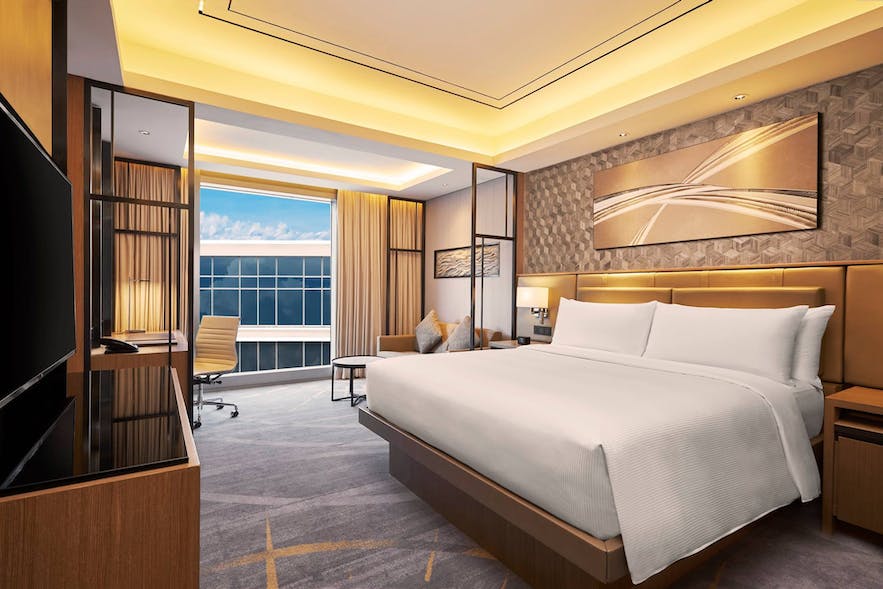 Situated inside Resorts World Manila and is one of the hotels near NAIA Terminal 3 Airport, Hilton Hotel is also close to several commercial districts and popular attractions in Manila. 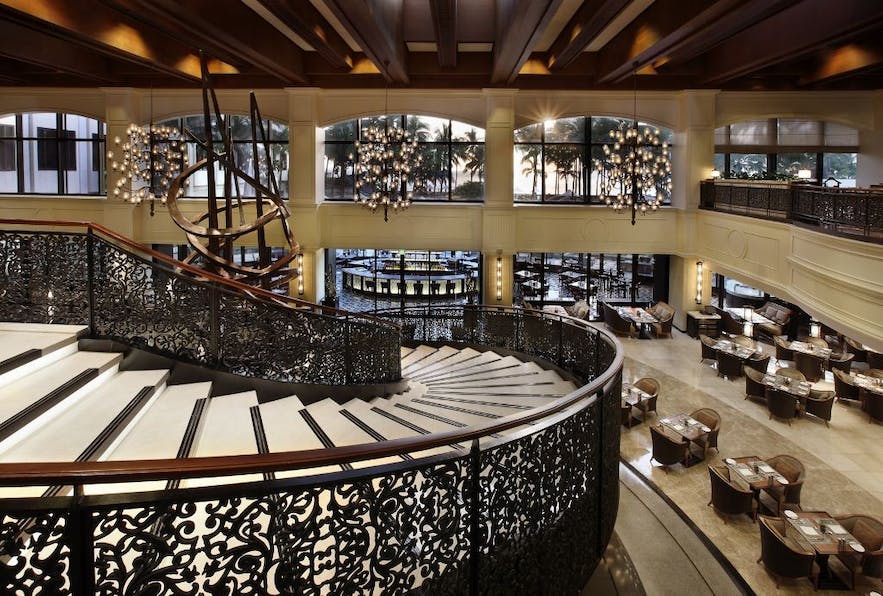 Known for its Spiral Buffet—itself, a food destination in the city of Manila—Sofitel Manila delivers an additional arsenal of luxury pleasures to its guests.

A cultural icon teeming of the wonderful architecture creation of National Artists Leandro Locsin and Ildefonso P. Santos, every corner of Sofitel glistens with magnificence against the sparkly Manila Bay sunset.

With 609 guest rooms that include the luxurious Imperial Residence, 32 Suites, 2 Opera Suites, and 12 Family Suites, Sofitel's roster of rooms delivers the best extravagances and comforts any thorough traveler would need for an invigorating Manila retreat.

For your epicurean delight, the Spiral serves a sizzling buffet featuring a mix of global cuisines and chef-recommended fine dining ala carte meals. La Veranda is another trendy lounge that leads to an alfresco setting adjacent to the hotel's popular lagoon-shaped swimming pool.

There are also bars perfect for unwinding or a nightcap: Le Bar, Snaps Sports Bar, Sunset Bar, and the Club Millesime exclusive lounge.

Sofitel Manila is 7.5 KM away from NAIA, 11 KM from BGC, 6 KM from Intramuros, and 4 KM from Rizal Park and National Museum. 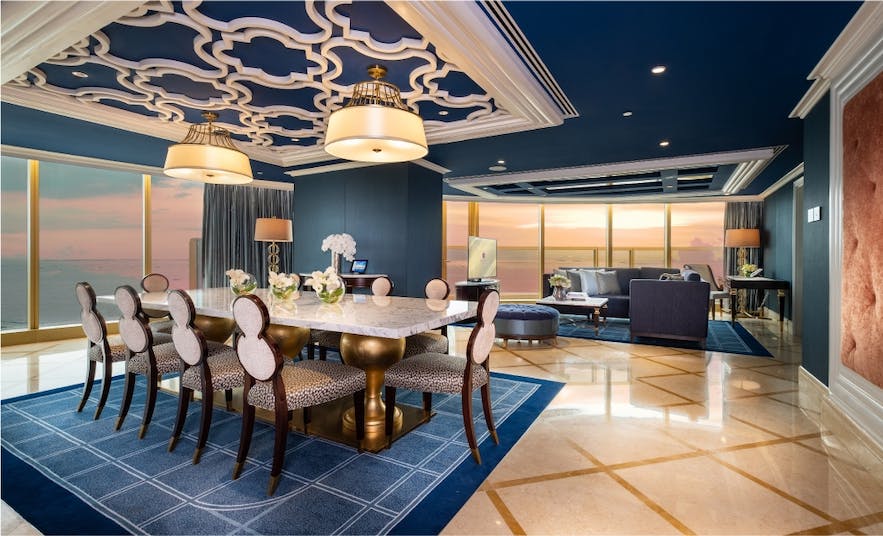 Meticulously designed, constructed, and landscaped over an expansive 44-hectare oceanfront property, Okada Manila takes the crown as Manila's best luxurious stay. It has all the comforts, services, and amenities that are setting a new gold standard anyone would expect for a 5-star hotel.

Offering a total of 993 exquisitely designed and spacious guest rooms, each one providing wonderful views of the Fountain and the Manila Bay, Okada Manila made sure their guests are pampered and treated to a profound state of relaxation. It is also one of the best hotels near MOA (Mall of Asia) Philippines.

By incorporating a fusion of Japanese hospitality concepts of the magokoro (true heart) and omotenashi (hospitality from the heart) with the warmth of Filipino friendliness, Okada Manila establishes itself as a haven of unmatched luxury, hospitality, and comforts.

Okada Manila's other amenities include the oceanfront swimming pool, a barbershop, the Retreat Spa, a 24-hour Fitness center, MICE facilities, a beauty salon, playroom for kids, a shopping center, a casino, and a beautiful outdoor garden.

Okada Manila is 5 KM away from NAIA, 3.2 KM from Mall of Asia, 10 KM from Intramuros, and 11 KM from Makati Business District.

Find Your Home Away from Home in Manila 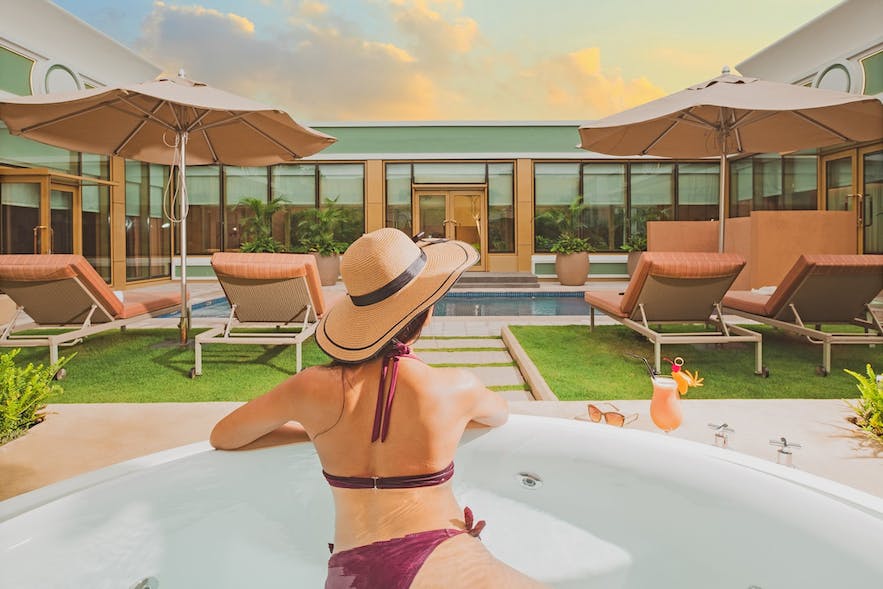 The pulsating vibe of Manila courtesy of its boundless energy and vibrant character may prove overwhelming at times but these hotels can serve as a refuge for a guest to recharge, reinvigorate and prepare for more exploration. Take your pick from this list of 5-star hotels in Manila, the cream of the crop of luxury accommodations in the city that also never sleeps: Manila.