Explore Pampanga,  the Culinary Capital of the Philippines, on your next getaway. Here’s a guide on what to eat, places to see, and things to do there.

Pampanga is one of the most famous provinces in the Central Luzon region because it holds the title of being the Culinary Capital of the Philippines.

Pampanga’s modern city of Clark is famous for its well-preserved ancestral homes, a lineup of themed and amusement parks, and bright and colorful year-round festivals.

Pampanga is also rich in natural wonders, with stunning waterfalls, majestic mountain views, and calm wetlands. You can go on a hike, swim in natural pools, and spot various migratory birds in the province.

From Aqua Planet to Zoocobia, Mt. Arayat to Miyamit Falls, and Aling Lucing’s to Razon’s, the whole province has got you covered.

Whether you are visiting Pampanga for the first time or rediscovering its charms by joining a tour or driving a rent a car in Clark Pampanga, here are some of the best things to do in Pampanga. 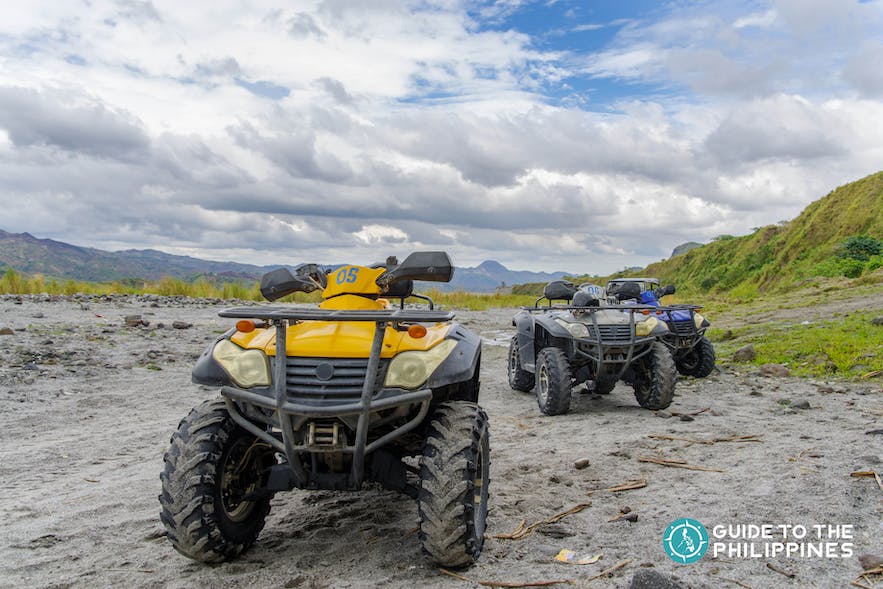 Mt. Pinatubo is one of the most visited attractions not only in Pampanga but in the Philippines as a whole. Situated between Pampanga, Zambales and Tarlac provinces, this active volcano features spectacular lahar formations.

Long after its historic eruption in 1991, Mt. Pinatubo has become one of the most especially for people searching for adventure. One of its major highlights is its crater lake. Depending on the season, the water color varies from blue-green to deep-blue.

Ride a 4x4 to the jump-off point where you’ll begin your trek. Enjoy the rugged landscape as you pass through rocky trails and idyllic streams, eventually reaching the crater lake where you can take photos.

Maximize your time in the province by adding a Mt. Pinatubo hiking adventure to your must-try list. 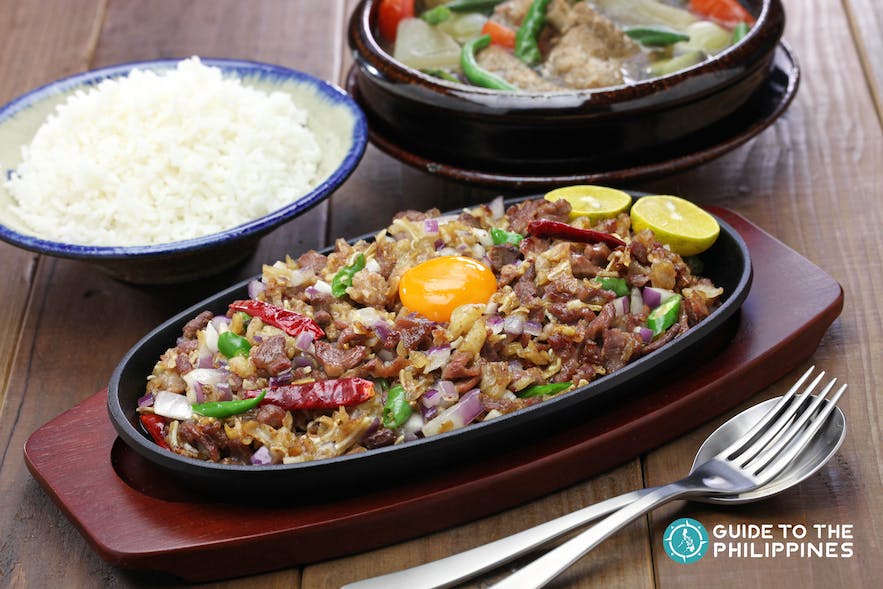 When in Pampanga, make a stop at the Queen of Sisig’s restaurant in Angeles City and order the iconic sizzling pork dish.

Aling Lucing’s sisig (made of chopped pork ears, cheeks, and liver seasoned with calamansi, onions, and chili peppers, served on a sizzling plate) has become such a hit, it is now a staple at many Filipino restaurants.

Still, nothing beats the original, so make sure to include this in your must-try list.

3. Enjoy the Great Outdoors at Sandbox 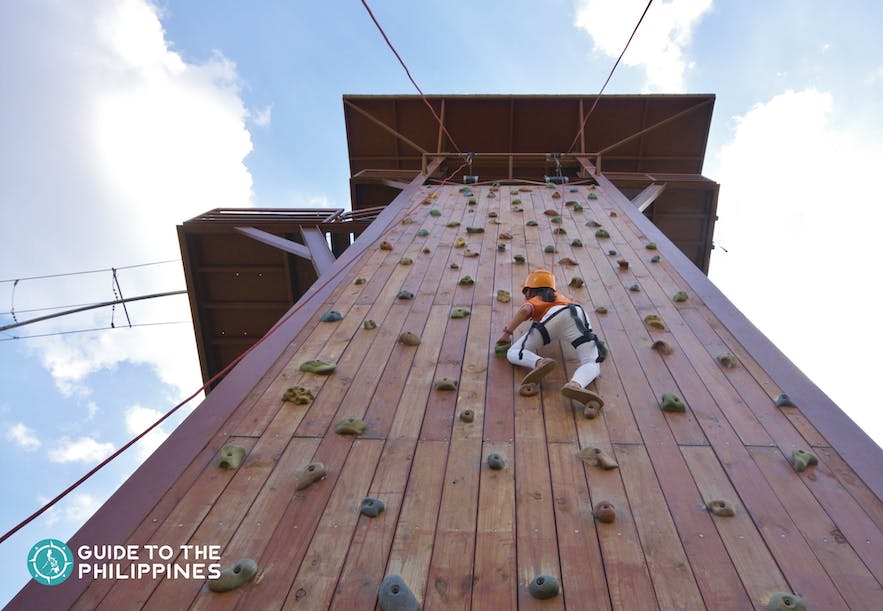 Blow off the stress from the week and go on a weekend of thrilling activities at Sandbox in Porac, Pampanga.

The outdoor adventure park has a number of adventure zones you can choose from, such as the Giant Swing, the Aerial Walk Challenge, the Avatar One, and the Adventure Tower, which includes the wall-climbing zone.

Sandbox also offers ATV and mini-ATV rides, camping sites, and kiddie playgrounds for those who opt to stay on level ground. 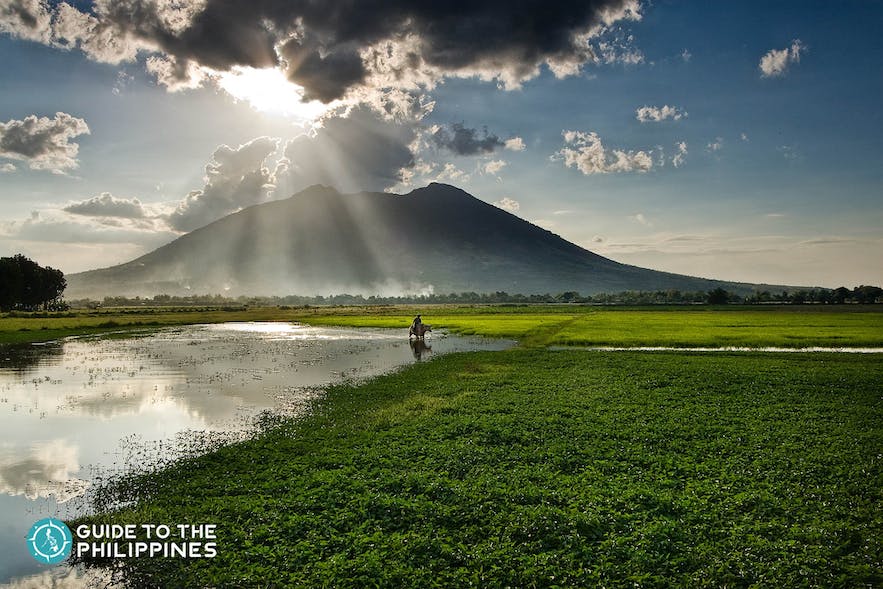 Pampanga’s sole mountain, Mt. Arayat, towers over the mostly flat plains of the province at 1,026 MASL.

The mountain lies inside the Mt. Arayat National Park, one of the oldest national parks in the country.

Non-climbers can enjoy the walking trails and natural pools at the base of the extinct volcano. Intermediate climbers can trek solo or in groups to the summit.

Trail guides are available to help you with the day-long trek across Mt. Arayat. 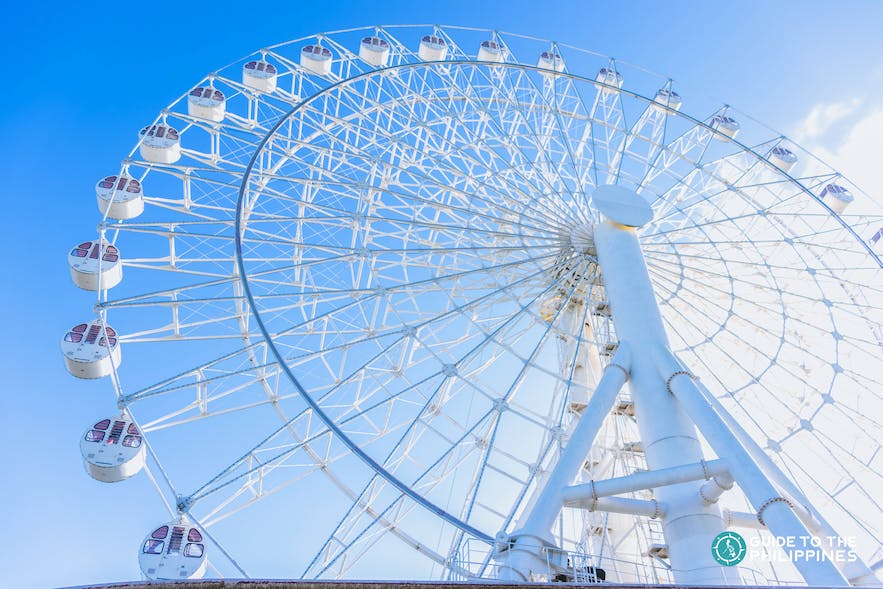 There’s always something about amusement parks that makes even the most jaded of adults feel like an innocent, carefree child again. And a visit to the Sky Ranch will surely make you feel like a child again.

The park does not have an entrance fee, but you have to pay to get on each of the rides.

6. Cool Down at Aqua Planet 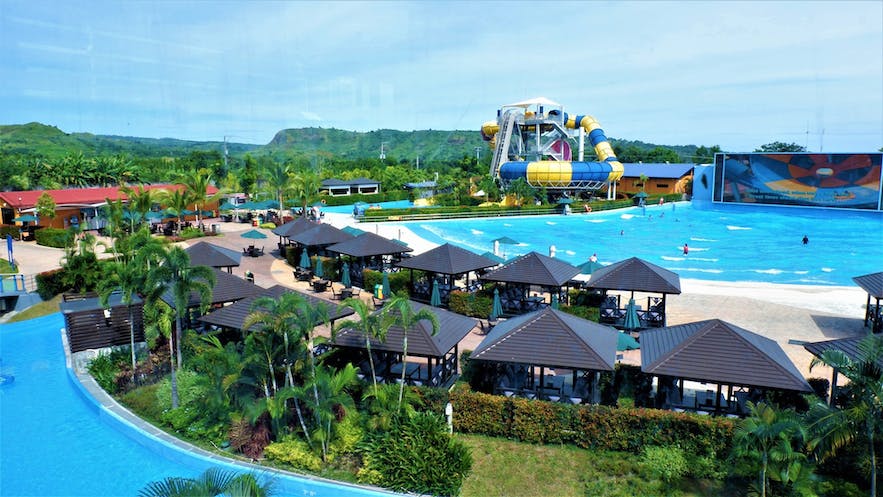 A weekend getaway would not be complete without getting your feet (or your whole body) wet.

Head over to Aqua Planet in Clark Freeport Zone, Clark, Pampanga and enjoy a full day exploring its 30-plus water slides and other attractions.

The water park also has its own restaurants, shops, and live entertainment shows in the evenings, so you can spend the whole day chilling inside the resort!

Go on a field trip around the whole Philippines in just one place at Nayong Pilipino inside Clark Freeport Zone. The park features replicas of tourist spots, historical sites, ancestral homes and native villages from all over the Philippines.

There’s even a replica of the Tabon Cave, where the bones of the first human settlers in the Philippines were found. Other attractions include a Money Museum and Textile Museum.

Traditional dances such as the tinikling and singkil are also performed at the park. See this attraction along with other tourist spots by joining a day trip in Clark, Pampanga.

Zoocobia is an adventure zoo theme park in Clark, Pampanga. Zoo attractions include a Birds of Paradise enclosure, a Garden Maze, a petting section where you can experience bottle feeding baby goats and pigs, and more.

It also has an endemic species showcase and a taxidermy museum.

There are other activities in Zoocobia as well; enjoy a camel ride up a hill, go on a thrilling ATV ride, feel the wind on your face while on the zip line, and go on a downhill drive with the gravity car (similar to the luge in Singapore)!

9. Have Fun at Clark Museum and 4D Theatre 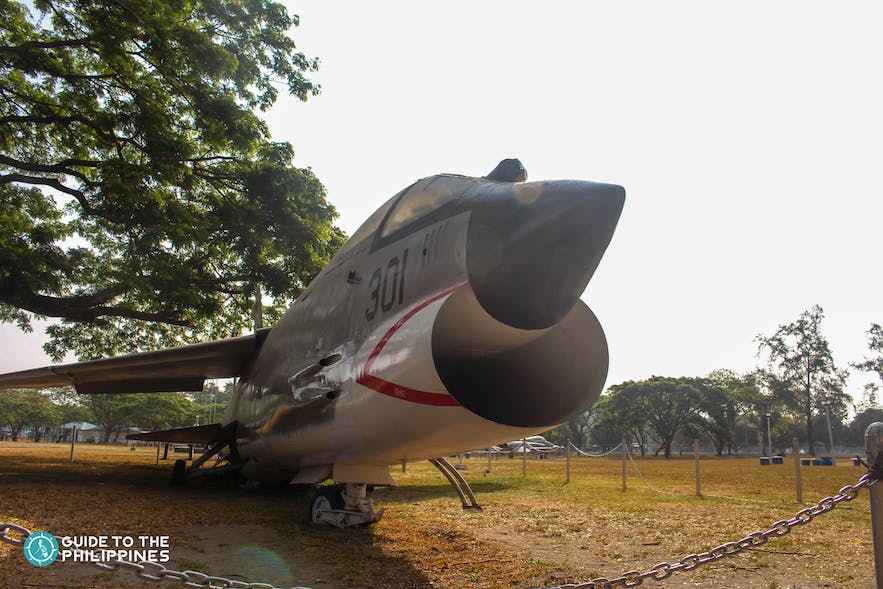 Located inside the former US Base in Clark, Pampanga, the Clark Museum showcases the history of Clark, the American occupation in the Philippines, and its significance in World War II.

Its galleries contain well-preserved memorabilia, dioramas, murals, and interactive displays that will definitely spark the history buff in you. 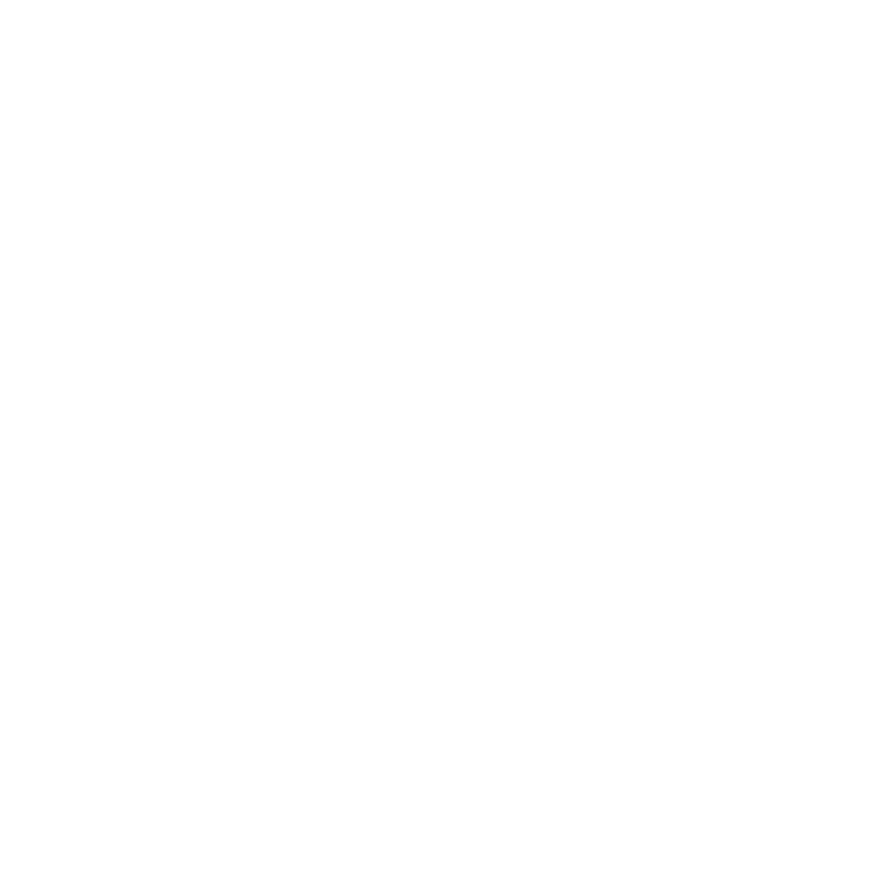 You don’t need to travel far if you want to learn wakeboarding, just head over to the Deca Wakeboard Park in Clark or Pradera Verde in Lubao.

Both wakeboard parks feature various jumps and obstacles that cater to both beginners and expert wakeboarders.

For those without equipment, they offer boards, helmets, and other equipment you can rent, so all you need to do really is to show up on your day trip to Deca Wakeboard Park, go on the board, and get soaked!

Museo Ning Angeles used to be the Municipio del Pueblo or the Town Hall of Angeles City until 1998.

Constructed in 1922, the two-story building stood guard over Angeles City, witnessing its growth and development throughout the decades.

The museum, which opened in 1999, gives a glimpse of Angeles City’s history through its memorabilia display.

The museum also serves as a venue for art classes, cultural performances, and exhibits of local artists. Visit this attraction when you join a cultural and heritage tour in Angeles.

The Pamintuan Mansion is a Spanish-era colonial home that has a beautifully-preserved architecture and design.

It is where the first Philippine President, Emilio Aguinaldo, stood to celebrate the first anniversary of Philippine independence from Spain.

Now open to tourists as a museum, the Pamintuan Mansion offers a view of what life was like for one of the influential families in the province.

13. Fall in Love with Miyamit Falls 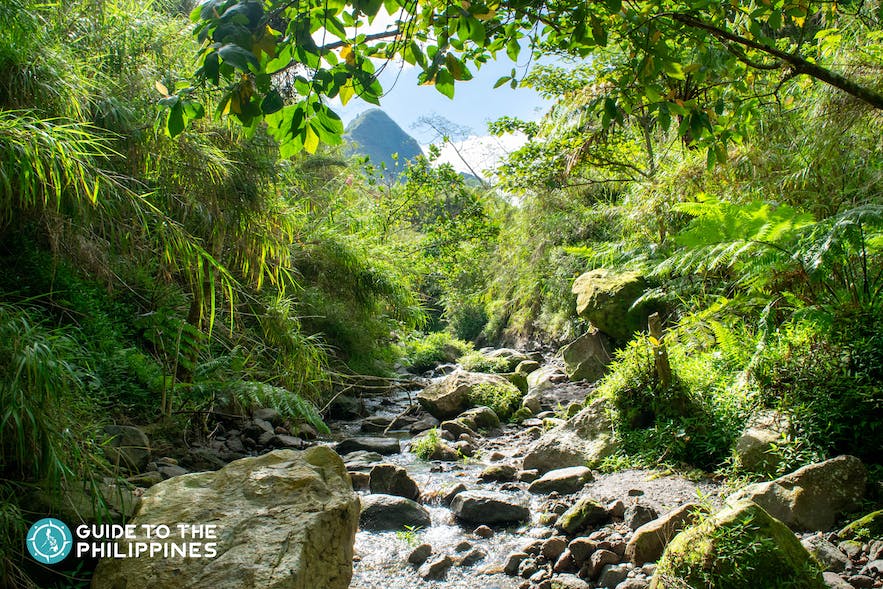 Wash away your stress by taking a dip at Miyamit Falls in Porac, Pampanga. Reaching this hidden gem at the heart of the province involves a long trek, but the view is worth the sweat.

It’s easy to be mesmerized by the pure nature view, and the sound of the water hitting the rocks as it makes its way down to the dipping pool.

There is no entrance fee to the Miyamit Falls, but you need to secure a permit from the Porac municipal hall.

14. Get a Private Dining Experience at Bale Dutung

If you want to try a 3- to 4-hour, 12-course menu of the best of Kapampangan cooking, get reservations at Bale Dutung in Angeles City, one of the best Pampanga restaurants.

Due to popular demand, they now also have an Anthony Bourdain menu, inspired by the late chef/travel host/writer’s visit to the restaurant.

As Bale Dutung also serves as the Tayags’ home, the restaurant only opens occasionally to diners. It’s best to check their website for the latest restaurant schedule and call for reservations.

15. Go Birdwatching at the Candaba Swamp

The swamp has about 32,000 hectares of wetland, which includes freshwater pools, marshes, and grasslands.

Migratory birds usually make the trip to the Candaba Swamp from October to February, to escape the harsh winter conditions in China and Russia.

It’s a simple dessert made with shaved ice, creamy milk, leche flan, macapuno, and saging na saba. But hands down, it is one of the best halo-halo recipes in the Philippines.

Razon’s of Guagua shops can be found all over Pampanga, so you can get your halo-halo fix at any time during your trip. 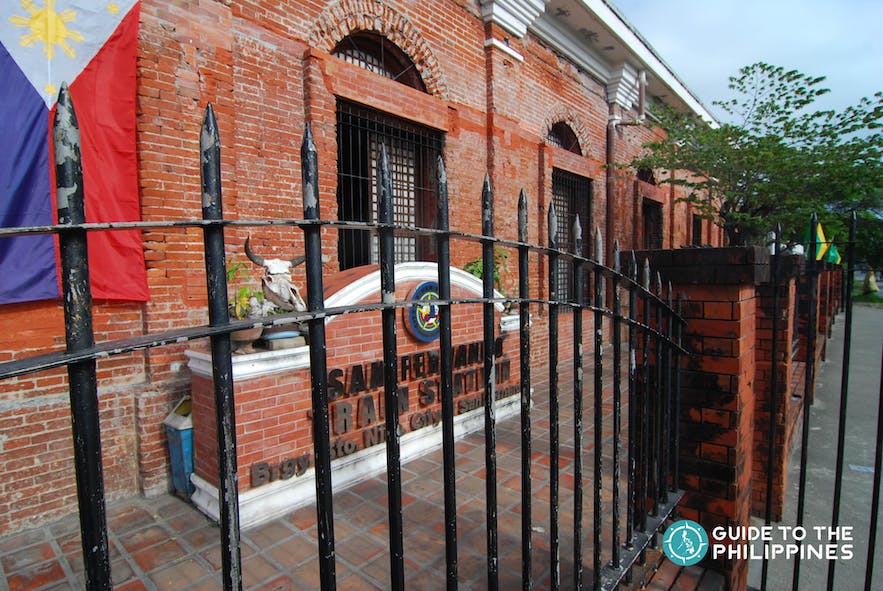 As the terminus of the tragic Bataan Death March in 1942, this train station ruins served as a silent witness to the suffering of Filipino and American soldiers under the Japanese forces right after the fall of Bataan.

Thousands of exhausted and dying prisoners-of-war were loaded into box carts at this station, to be sent to Camp O’Donnell in nearby Capas, Tarlac.

18. Offer a Prayer at the Holy Rosary Parish Church 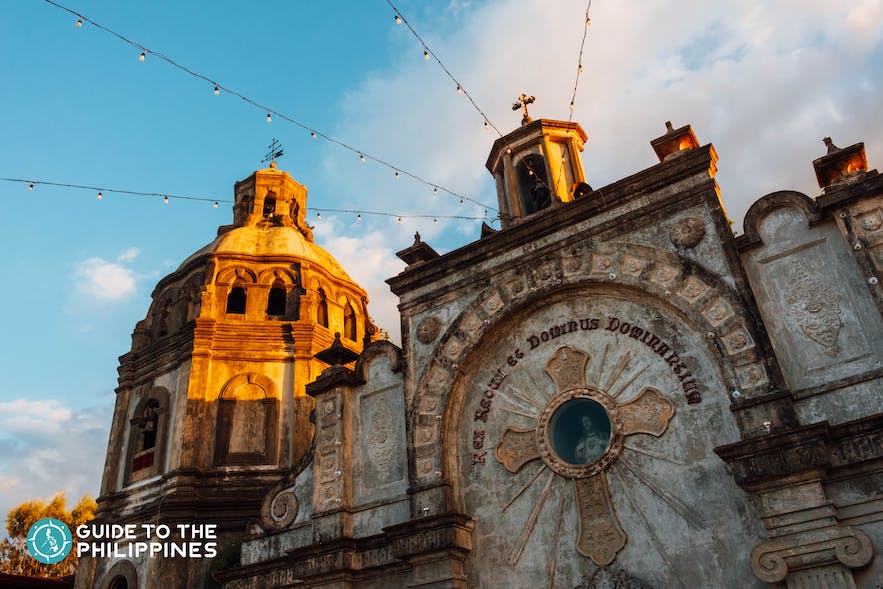 Fondly called by locals as Pisambang Maragul (“Big Church”), the Holy Rosary Parish Church is a living church and a national historical site in Angeles, Pampanga.

Construction of the church began in 1877 and was built under the “polo y servicio” labor system, the forced, unpaid labor system for Filipino native men imposed by the Spanish colonial government. 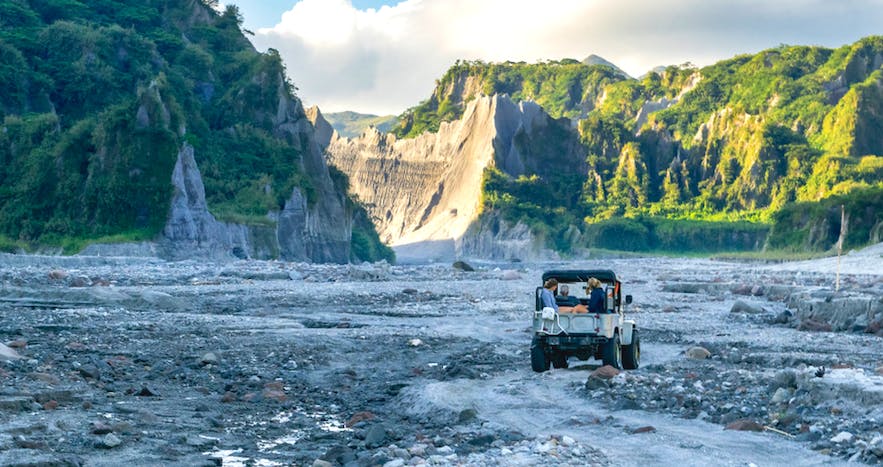 You will definitely get your fill of the best local dishes, exciting theme parks and Pampanga hotels and resorts, must-visit historical sites, and enchanting natural tourist spots only found in the Philippines.

Whether you are traveling solo or with family and friends, add Pampanga to your list of must-visit provinces in Central Luzon in the Philippines.

There is so much to see, experience, and bring home with you. And it’s not just the realization that Pampanga really is the Culinary Capital of the Philippines, but also the fact that it is one of the top summer destinations for the whole family.

Explore Pampanga tours and activities to help you maximize your perfect weekend getaway!