Serious food travelers know that a lot of the best food finds can be found, not in the fanciest establishments, but on the streets instead. Street food has become an important food category on its own, especially when it comes to Filipino food.

It's affordable, convenient, and a great way to get to know a country’s culture. In the Philippines, the choices for street food tours are endless.

What is Filipino Street Food?

Like with a lot of its cuisine, Filipino street food is mostly borne from hardship. As a colonized nation, expensive and quality meats were very expensive and difficult to procure, necessitating the use of the affordable and less glamorous parts of the animal.

It is a testament to the adaptability and ingenuity of the Filipino people that these parts have been turned into some of the most delicious and most affordable bites of food. 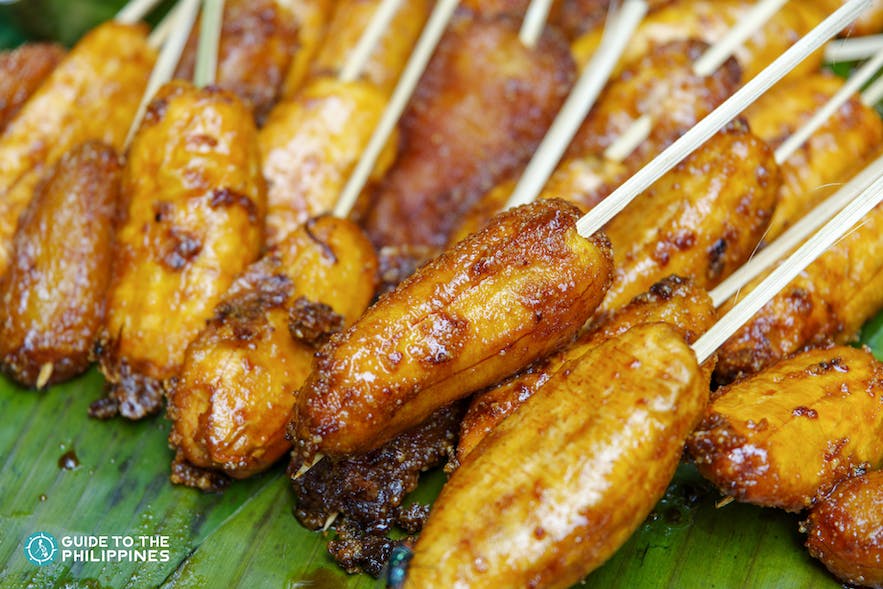 Street food can still be found on almost every street corner in the major cities throughout the Philippines, and lately, they have become even more accessible with night markets that stay open until 2AM.

Take note that it’s quite impossible to discuss Filipino street food in just one article. Pancit (noodles) and kakanin (rice cakes) are also considered street food, but the following list will just be confined to small bites or less filling snacks. 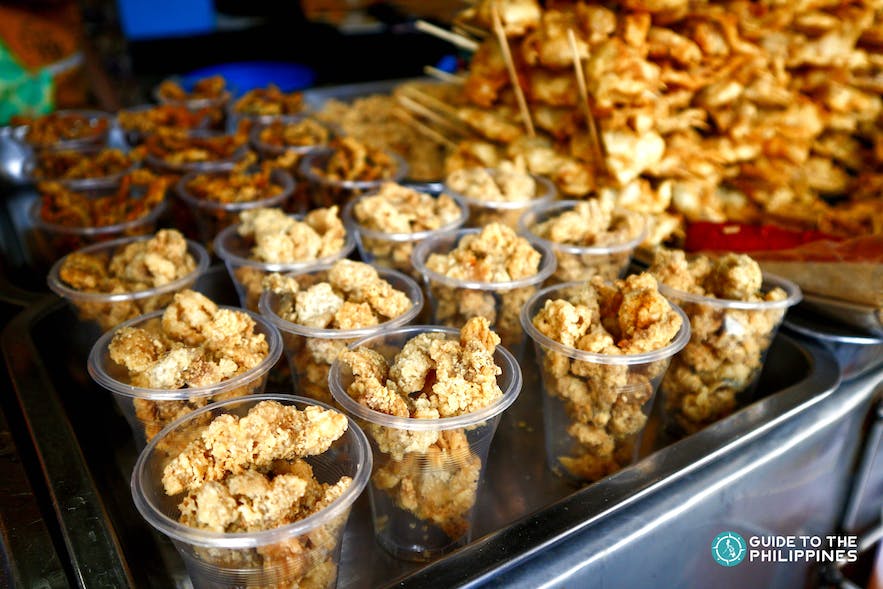 These small bites can be categorized into two major categories, “inihaw or sugba” meaning grilled and “prito or pinirito” which means fried.

Without exaggeration, it wouldn’t be surprising to spot a small charcoal grill on every other street corner in every major city in the Philippines.

Meanwhile, fried street food is just as popular, with savory fried fare usually served with a dipping sauce that’s spicy and sweet or with seasoned vinegar as well.

While the technique of frying wasn’t originally in the repertoire of Filipino cuisine, it has become one of the nation’s favorite cooking methods, especially with street food.

Must-Try Street Food in the Philippines

Here are just some of the nation’s favorite examples of street food and must-try for any first-time traveler in the Philippines: 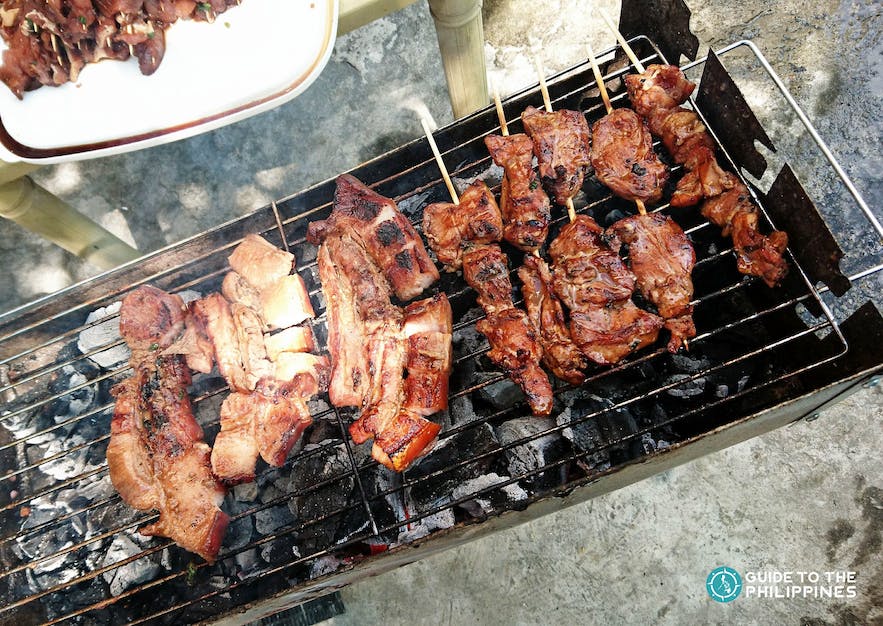 Unlike their American counterpart, barbecue in the Philippines refers to skewered meats, like pork, chicken or sometimes even beef, that are marinated, grilled, and basted with a barbecue sauce or the marinade it’s been steeped in.

The marinade usually consists of lemon-lime soda, garlic, calamansi (local citrus), soy sauce, banana catsup, and vinegar. While already delicious on their own, most would enjoy a barbecue with some vinegar seasoned with pepper, chilies, ginger, and garlic.

The sweet and sour marinade, spicy vinegar and the smoky flavor imparted by the charcoal all combine to make barbecue a delicious combination of flavors, leaving little doubt as to why it’s the most common street food found. 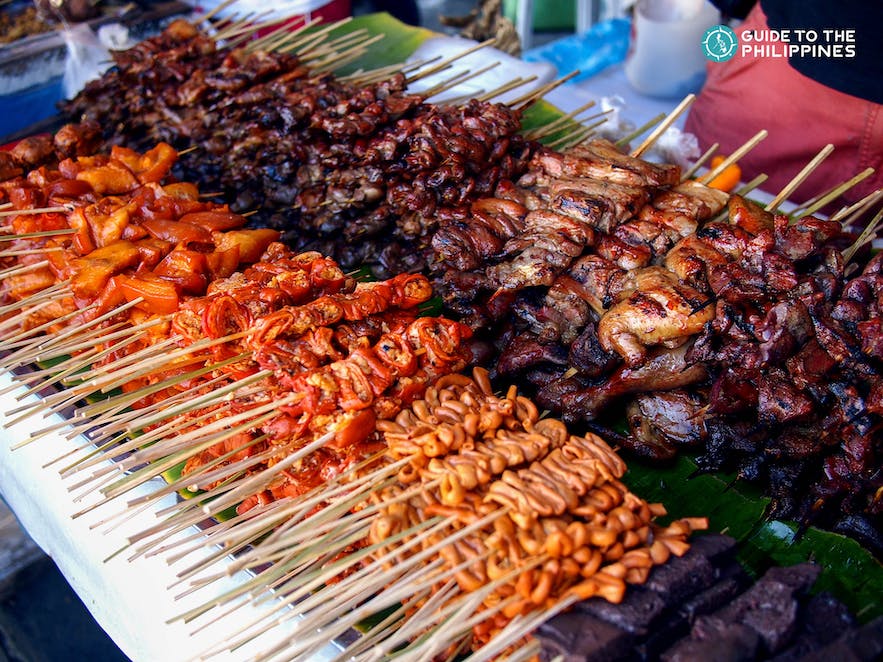 Isaw, intestines from either pork or chicken, is a clear runaway favorite, and deserves a mention on its own. It has the same smoky flavor from the charcoal like barbecue, but also some crunchy bits when grilled perfectly.

Apart from isaw, other parts like offal (laman loob or internal organs) get some grilling love as well. Chicken gizzard, liver, heart, pig’s ears, butt, and even heads are all popular choices too. Each of them are also grilled and basted with the same marinade/barbecue sauce and then served with spiced vinegar.

A post shared by 🇵🇭FoOdHoArDeR/pLaCeExpLoReR🇵🇭 (@gracie_eatsandgo_ph) on Jul 16, 2019 at 10:18pm PDT

Filipinos developed ingenuity in their cuisine but also with naming dishes as well. Grilled chicken feet is locally called “adidas” since the shoe brand with 3 stripes corresponds to the 3 toed chicken foot.

While there isn’t a lot of meat in the feet, the skin is deliciously rich and fatty with a ton of flavor in them that is only enhanced by the grilling process.

Yet again another dish with an interesting name, betamax or DVD is coagulated blood cakes that are skewered and grilled. The cakes used to be rectangular-shaped, giving rise to the name betamax, the now defunct video cassettes.

The cakes were later reshaped into round pucks, getting the new name DVD or VCD referring to the video disks. Whatever the shape, these cakes are not only delicious in soup. The process of grilling gives them a great flavor but also an interesting texture that the other barbecue meats don’t have. 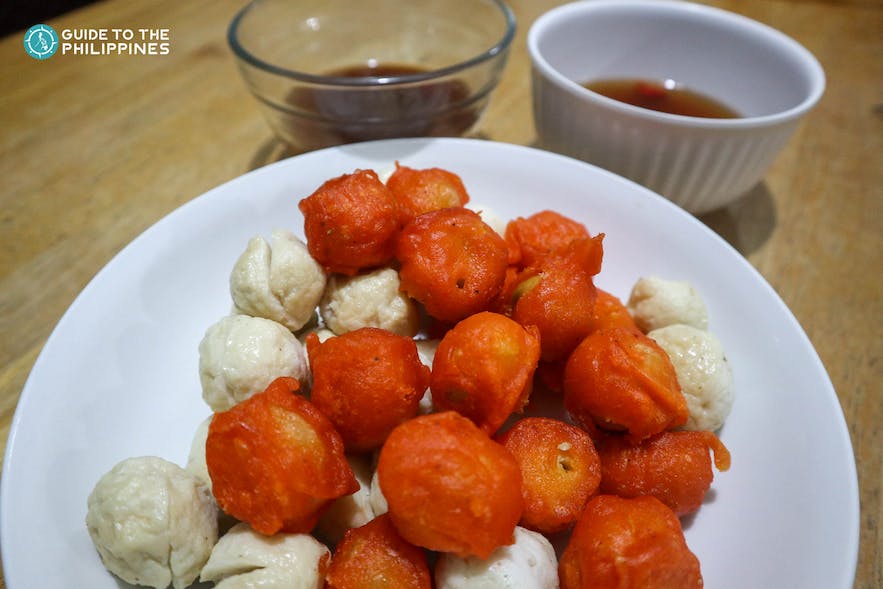 Either name refers to eggs, hard-boiled, and then batter-fried like tempura. Kwek Kwek (quail eggs) and Tokneneng (chicken or duck eggs) are delicious on their own, crunchy and rich.

They are usually served with a sweet soy dipping sauce or some spicy vinegar. Most of the time, the batter is tinted orange using annatto seeds, but it does not affect the taste. 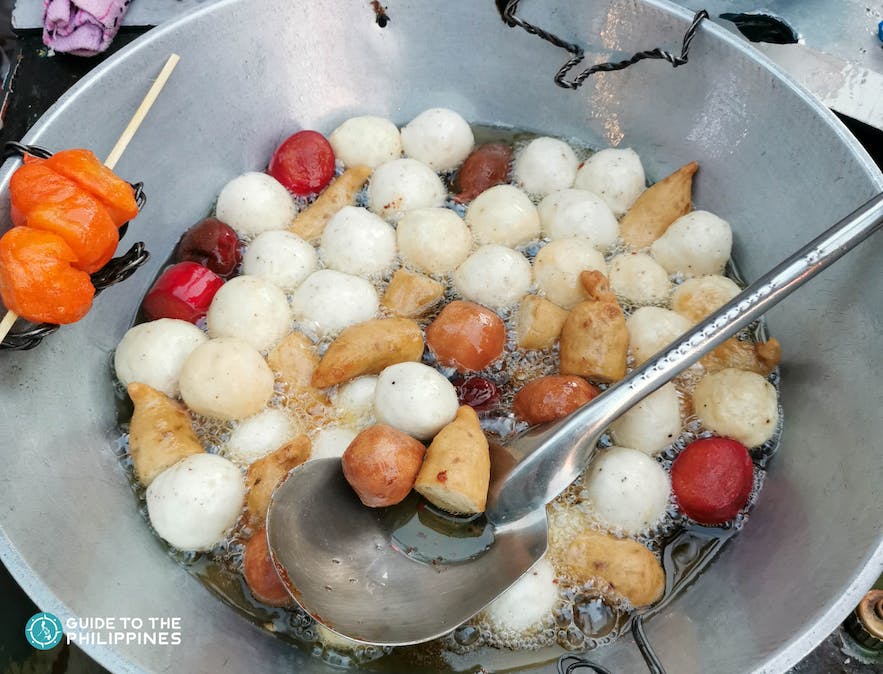 Like most Asian countries, the Philippines enjoys its fair share of fish and squid balls. These are deep-fried in oil and diners are encouraged to gather by the wok, use a skewer and pick up as little or as many balls as they like.

Apart from fish and squid (kikiam) made with taro and even red-colored hot dogs can be found frying in the same wok. After skewering, one is then expected to pick a sauce to dip in.

Usually, the choices range from a sweet or sweet and spicy sauce made with caramelized sugar, garlic, and fish stock or the simpler spicy vinegar dip. Take note that double-dipping your skewer in the sauce container may get you evicted from your favorite fishball cart. 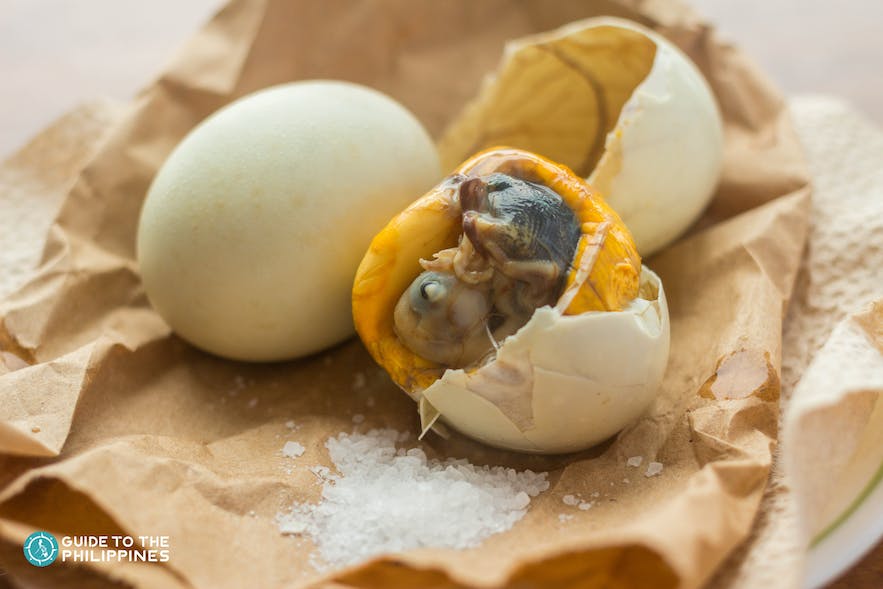 No Filipino street food list is complete without the iconic balut, a boiled fertilized egg embryo eaten straight from its shell. Often the subject of eating challenges especially for non-Filipinos, these eggs are incubated for a period of 14 or 21 days and then boiled and steamed.

The municipality of Pateros in Metro Manila is known for being home to the duck-raising industry and balut production, which is said to be the best in the Philippines.

Balut is best eaten by making a small crack or hole in the eggshell and sipping on the broth, then dipping its contents on salt or chili, garlic, and vinegar and eating it whole - including the undeveloped chick. 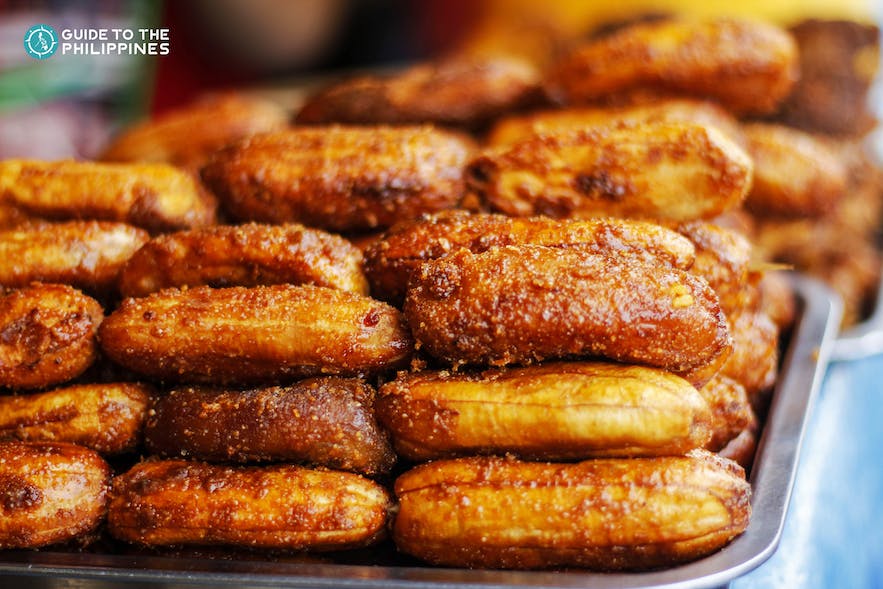 Saba bananas are deep-fried with margarine and caramelized sugar and then skewered on sticks. The cooking process not only softens the bananas and sweetens them, bu the caramelized sugar also forms a thin candy coating around the bananas, giving them a wonderful texture. Think of them as bananas foster, only with better texture. 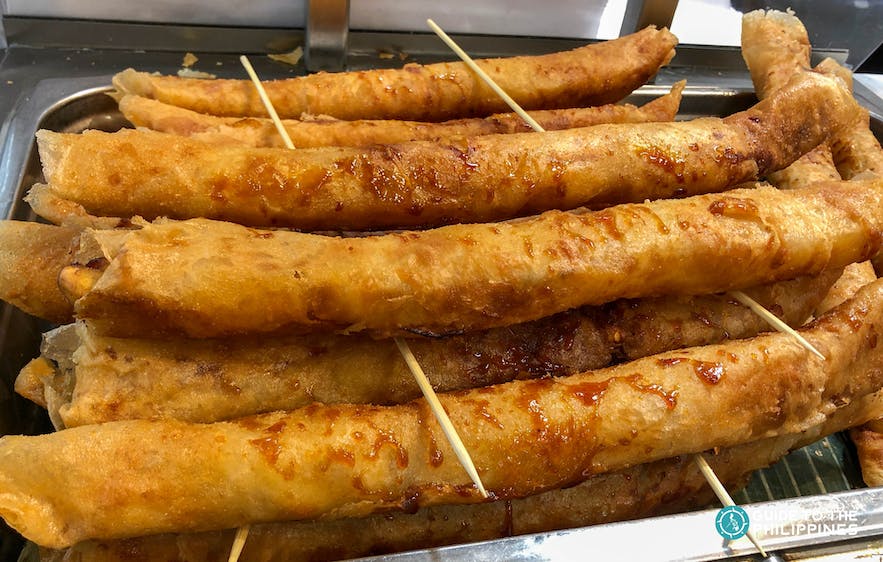 Slices of saba bananas are wrapped in spring roll wrappers together with some ripe jackfruit and then deep-fried to a crisp. Most versions also have some caramelized sugar sprinkled on the wrapper.

The sweet and pungent jackfruit only serves to enhance the tender sweet bananas while the thin spring roll wrappers provide an almost deafening crisp. 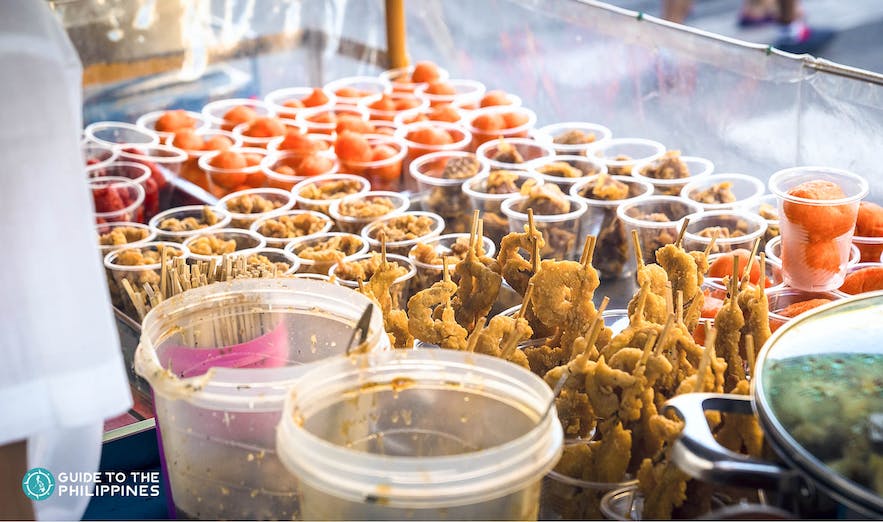 As delicious as grilled isaw is to the Filipino dining public, there are some who prefer them fried. Deep frying the intestines provides a wonderful crunch and mutes most of the iron taste of offal that some may find challenging.

Also wonderful fried are chicharon bulaklak or ruffle fat. With its ruffly shape when fired, they slightly resemble flowers, hence the name “bulaklak.”

It isn’t just savory meats that get the grill treatment. Local cardava bananas, called “saba” are also grilled over charcoal. It’s especially popular in the Southern islands of the country. Some variants see the bananas just grilled plainly, while some add a touch of margarine and sugar to enhance the flavors of the banana.

When ripe and grilled perfectly, the saba becomes extra tender and sweet, with a smoky finish that’s perfect while walking along the countryside or even the beach. 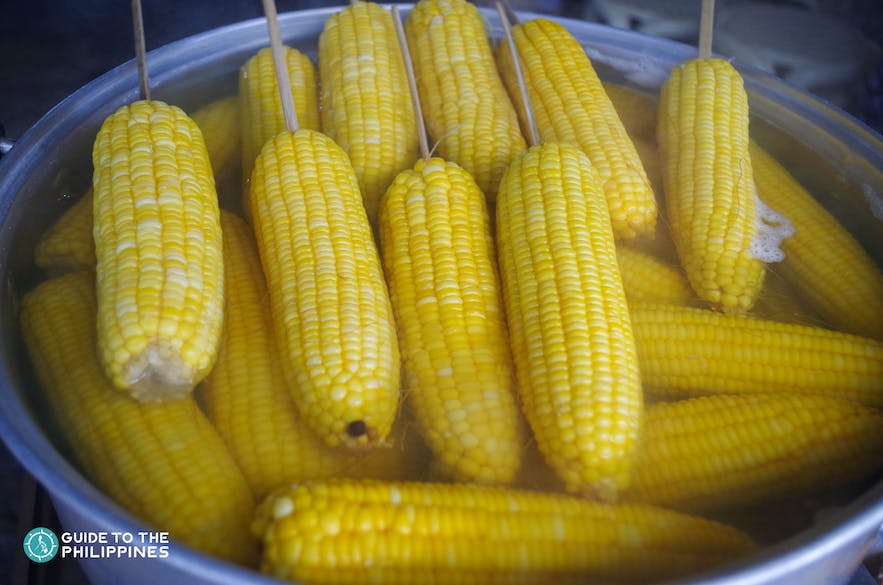 Local white corn or mais is also an excellent ingredient to grill. The white corn is grilled over charcoal whole on the cob, basted with margarine from time to time.

The inherent sweetness in the corn is enhanced by the smoky grill and a final brush of margarine (sometimes even a processed cheese spread) plus a sprinkling of rock salt provides the snack with a richness that is tough to beat.

It’s a local favorite since it not only tastes good, but it also fills up the diner, tiding one over until lunch or dinner time. 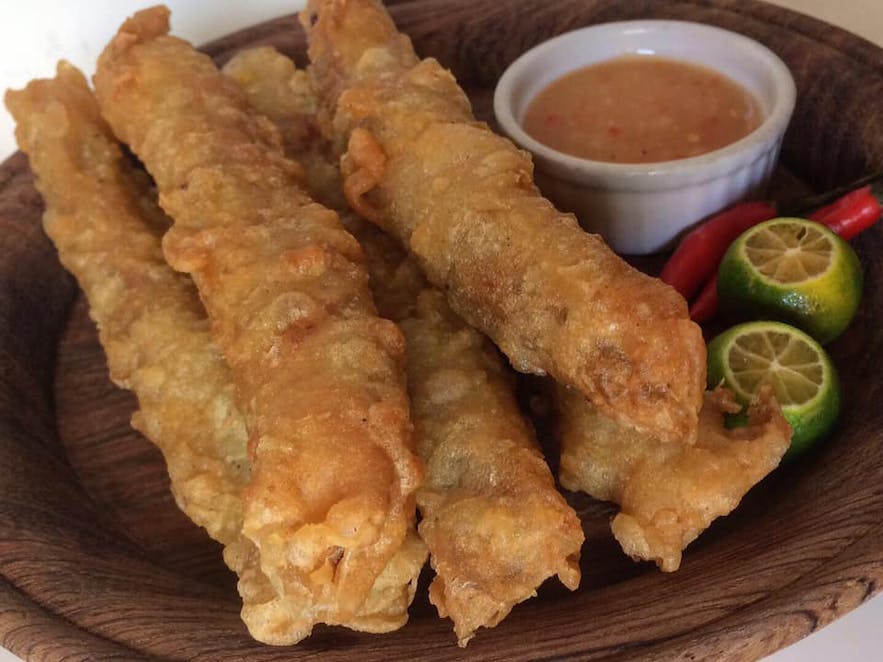 Mostly found in the Visayas region, vegetables and bamboo shoots flavored with Chinese 5 spice powder (ngo hiong) are wrapped in spring roll wrappers and deep fried. Crunchy and aromatic, the rolls are delicious on its own or dipped in vinegar or a thick sweet sauce also flavored with 5 spice. 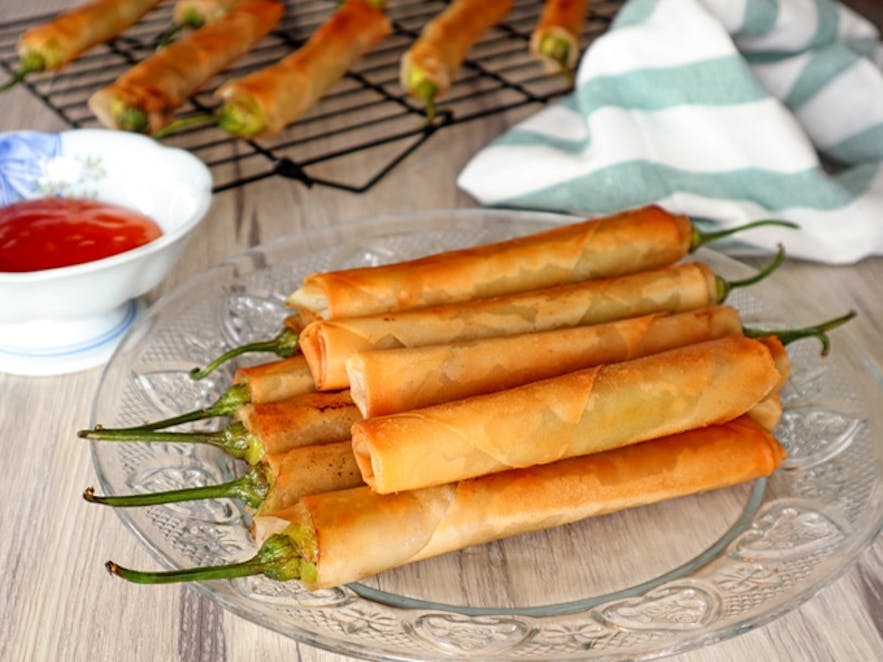 A rather late addition to the Filipino street food line up, dinamita or dynamite are green finger chilies stuffed with processed cheese, rolled with a spring roll wrapper and deep-fried.

They are usually cooked with the stem on, making them resemble sticks of dinamita or dynamite. The creamy melted cheese serve to mellow the spiciness of the chilies and both are nestled in the crunchiness of the wrapper. 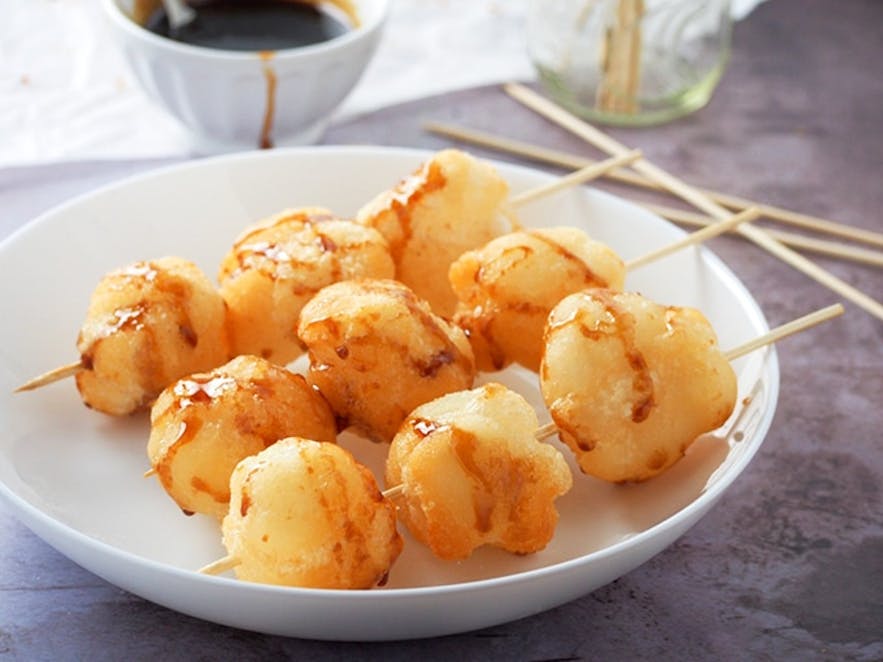 Glutinous rice flour and shredded coconut are made into dough, shaped into balls, and then deep-fried. They’re usually served skewered and they can be served plain or glazed with caramelized sugar. It’s filling and affordable, which makes them one of local worker’s favorites.

Explore the Street Foods of the Philippines 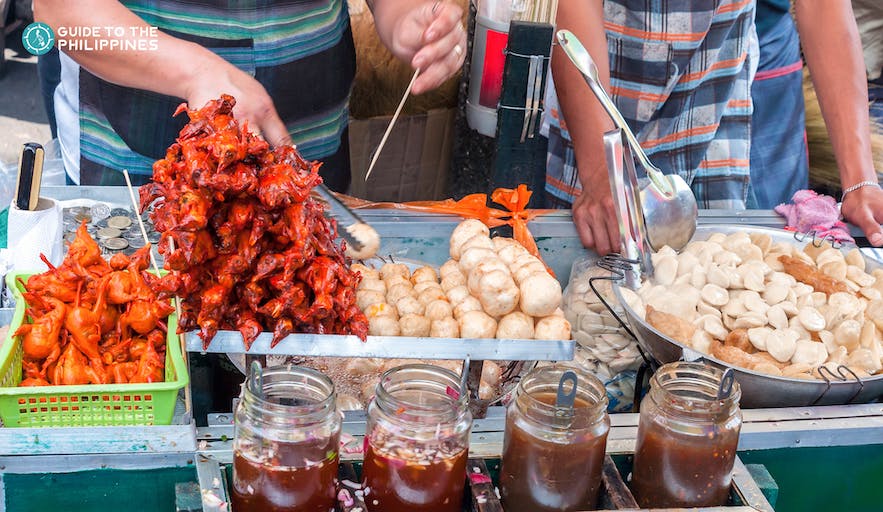 Is there any more iconic view of Asian cuisine than a street filled with smoke and aromas from charcoal grills, deep fryers, and vehicles all melding together, with affordable, convenient, and delicious food being enjoyed by multitudes of people?

Very few things can top that kind of an atmosphere and one can definitely enjoy that in the Philippines. Filipino street food, with colorful names, and simple but delicious flavors, is certainly iconic in itself and must be experienced when doing food tours in the Philippines.