Built during the Spanish era in the late 1800s, the church of San Joaquin in Poblacion has become Iloilo's symbol of the victory of good over evil. From afar, the structure looks just like any antique church but upon checking out the facade closely, you can see what makes the church so unique. The intricately designed front depicts the 1861 Battle of Tetouan in North Africa and the triumph of the Spanish army over the Moors.

San Joaquin Church was erected with the help of famous sculptors, skilled masons, and celebrated craftsmen and painters from Mexico and Spain. When Friar Thomas Santaren, who was the town's parish priest at the time of the church's construction, heard about the victory of the Spanish, he instructed the workers to create a bas-relief version of the Battle of Tetouan. The mural was called Rendicion de Tetuan and shows military scenes between the Spanish army and the Morrocans.

Just like many churches, San Joaquin Church was also used as a military fort during the Muslim raids. The church took in women and children for refuge while the men were tending to battle outside. It also became an evacuation center during the occupation of the Japanese.

San Joaquin Church was declared a national shrine in September 1977. The militaristic design drew admiration and visitors from all over the country. The church was later proclaimed as one of the Cultural Heritage Churches of the Philippines by the National Historical Institute in November 2001.

The church was later damaged by the Pacific war and a major earthquake. The national government and the people of San Joaquin helped restore the church during the 1980s.

The church of San Joaquin is located beside the town plaza and stands on a plain overlooking the sea. To its right is a three-storey bell tower and to its left are the ruins of an old convent. The structure is made from lime stones secured from the Igbaras mountains and white coral stones that came from the sea shores of San Joaquin. The three altars are also made of lime stone. 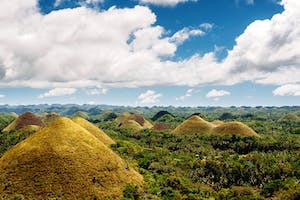