Simala Shrine, popularly known as The Monastery of the Holy Eucharist, is situated in Barangay Lindogon, Sibonga, Cebu. It is among the most visited religious places in the Philippines. The monastery is built and owned by the Marian Monks of Eucharistic Adoration (MMEA) who serve as the guardians of the place. It was around 1997 when the church became popular and was often crowded with people who want to offer prayers and wishes to the Blessed Virgin Mary.

The Marian Monks of Eucharistic Adoration came from Pampanga and is said to have escaped the range of the erupting Mt. Pinatubo. As stated in anecdotes, during the explosion of Mt. Pinatubobo, there was a woman named Terry Brooks with an image of the Blessed Mary in her hands who ran toward the chapel.

She gave the statue to Frater Martin and told him that it will be safe in the church. After the eruption, they went looking for the woman but they failed to find her. After some time, the bishop of Cebu let the monks move to Cebu.

In Barangay Lindogon in Sibonga, there lived an old man named Ingkong Villamor who had a prophecy saying that a white lady will dominate a desolated hill, and it will turn into a religious site. The old man then passed away and his son, Monsignor Tomas Villamor, became a priest.

When Monsignor Tomas met the Marian Monks, he decided to build a convent for them. The site where it was constructed is on a remote hill in the same barangay. The convent was a simple nipa hut surrounded with planted trees.

After some time, an unfortunate event befell the village. A dengue outbreak killed a handful of children and was continue spreading to others since parents couldn’t afford to bring their kids to the hospital. Because of this, Frater Martin, one of the monks, invited the people to join a penitence walk.

It is said that during the walk, the people noticed a fragrant smell of a flower that quickly spread throughout the village and slowly eliminated the mosquitoes. Miraculously, the children suffering from dengue were healed. The incident spread from town to town, and that's when devotees started coming to the church. 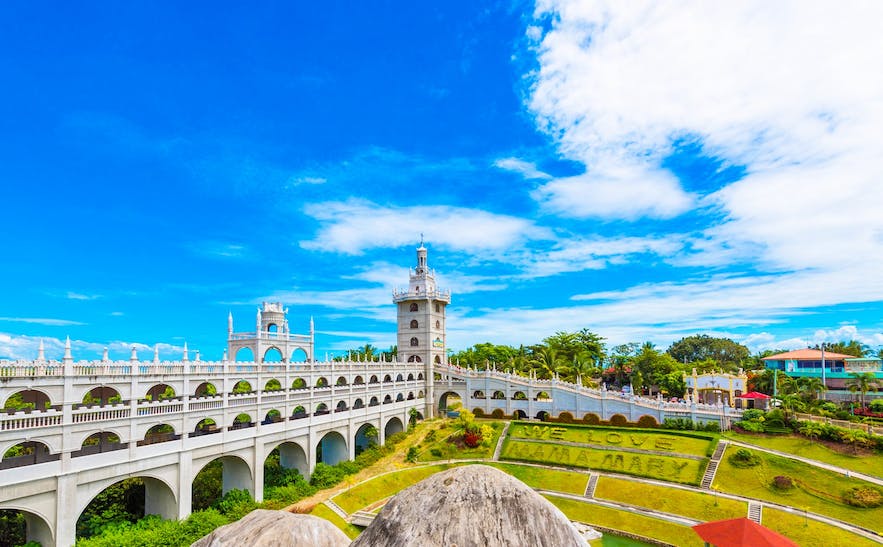 What You Can See and Do Inside The Church

At the center outside the church is a landscape where grass forms the words "We Love Mama Mary". Once inside the monastery, you will be greeted by a magnificent view of the site's interior.

It is a wide-ranging structure that is full of terraces and columns surrounding the area. There are also letters displayed on a board which are from locals who claim their illnesses were healed by the Blessed Virgin Mary.

The church altar has some images of different saints surrounding the image of the Blessed Virgin Mary placed in the topmost middle part. The ceilings have paintings that somewhat look like the ones at Sistine Chapel in Rome.

One part of the church is a place where people can write letters to the Blessed Virgin Mary. Beside it is a prayer room where the replica of the Virgin Mary is preserved. The image is said to be the one who had shed tears, and since then, believed to be miraculous.

In addition to that, a museum that holds the various forms of the Virgin Mary can be located inside. It also houses the clothes of the Blessed Virgin Mary, the one she was wearing by the time she shed tears.

Tourists can also shop in the souvenir store inside the church. The items sold in the shop are images of the Virgin Mary, saints and angels, crucifix, bibles, rosaries, and prayer guides.

There is also a dedicated part where visitors can light candles and say their prayers/wishes. The candles sold here vary in colors that correspond to a specific need.