Guide to Diving in Tubbataha Reef: One of the Best Diving Destinations in the World

Discover the incredible underwater sceneries and marine creatures of Tubbataha Reef in the Philippines, one of the best diving destinations in the world. Find out how to plan your diving trip, what to expect, and other diving travel tips in this guide.

The Tubbataha Reefs Natural Park, one of the best diving spots in the Philippines and best spots for scuba diving tours for certified divers, is located at the center of the Sulu Sea, in between the Visayan region and the island of Palawan. It sits at the heart of the Coral Triangle and is the largest Marine Protected Area of the Philippines, covering 97,030 hectares worth of awe-inspiring marine biodiversity.

It is a UNESCO World Heritage Site and is part of the Ramsar list of Wetlands of International Importance. It was also nominated as a New 7 Wonders of the World in 2018 and remains one of the best tourist spots in the Philippines.

Best Time to Go to Tubbataha 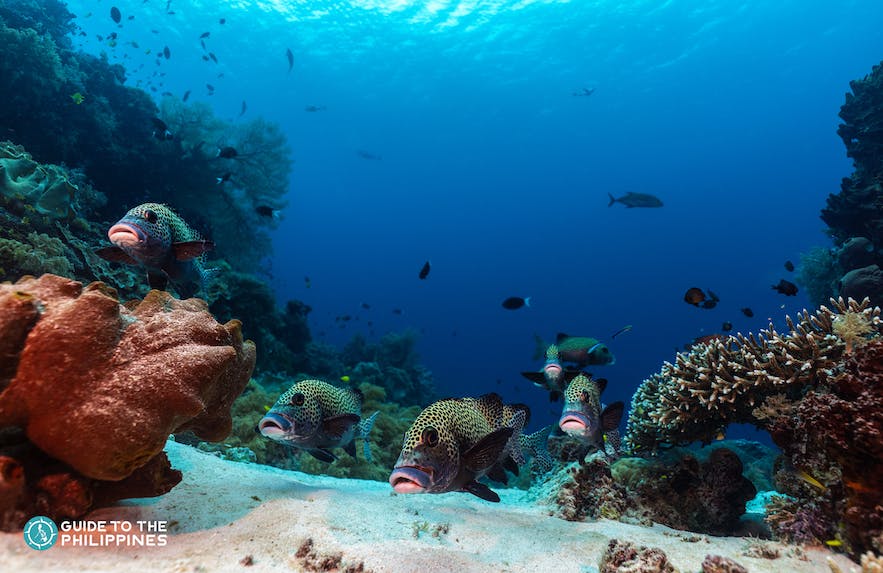 Tubbataha Reef's isolation is its protection from human exploitation. Scuba divers may only be able to visit Tubbataha during its dive season from mid-March to mid-June when its waters are glass flat, the skies are clear, and water visibility of about 30 to 45 meters.

How to Get to Tubbataha

Puerto Princesa in Palawan is the jump-off point for travelers going to Tubbataha. Read our Puerto Princesa travel guide on how to get there by flights, buses, and ferries from Manila, Cebu, and other tourist hubs in the Philippines.

From Puerto Princesa wharf, you will be picked up by the liveaboard that you will be booking, which will be your home base in Tubbataha Reef. 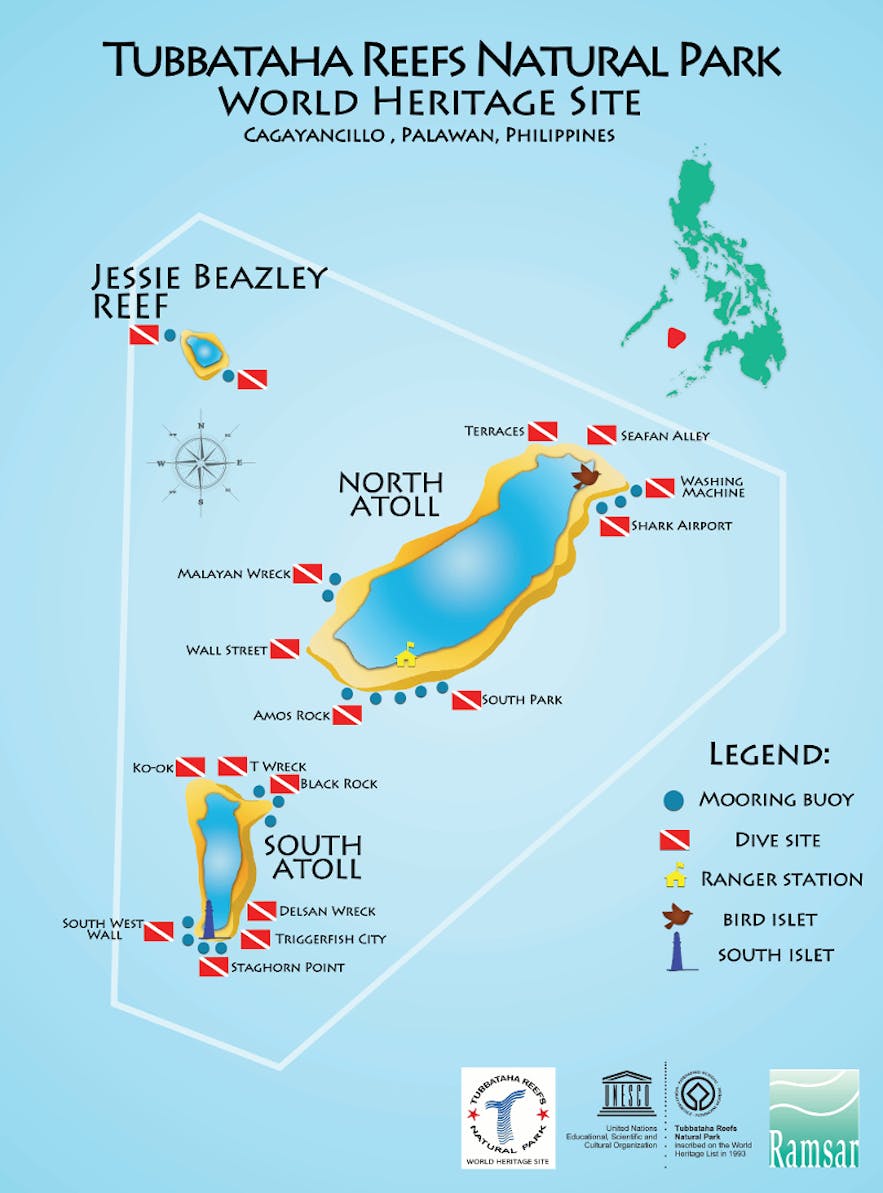 There are no accommodation facilities in Tubbataha Reef, and it's about 10 hours away from the city. That's why vessel-based or liveaboard diving trips are the only option. Dive visitors will stay on a yacht or boat during the diving trip in Tubbataha Reef.

Liveaboards in Tubbataha Reef are usually fully booked years in advance, especially in peak season during Easter and the Golden Week holidays.

These liveaboards mostly sail on a weekly basis to and from Puerto Princesa. They set sail by evening and arrive at Tubbataha by sunrise.

Tubbataha is made up of two huge coral atolls called the North and South Atolls, plus a smaller coral structure called the Jessie Beazley Reef, found northeast of the North Atoll.  Each liveaboard has a working flexible itinerary as the weather, tides, and currents change.

GSM and Internet connectivity are not available there, so please do give your advance notices to your colleagues at work, your friends, and your loved ones about your adventure. Make sure you have your well-maintained scuba equipment with you because you are typically far from civilization.

The word “Tubbataha” is a Samal term that means “long reef exposed at low tide.” Theories explain that atolls were volcanic islands centuries ago, which went extinct over time. As the volcanic islands subsided, its fringing reefs around it continued to grow upwards that appear today like giant coral rings surrounding its respective lagoon. 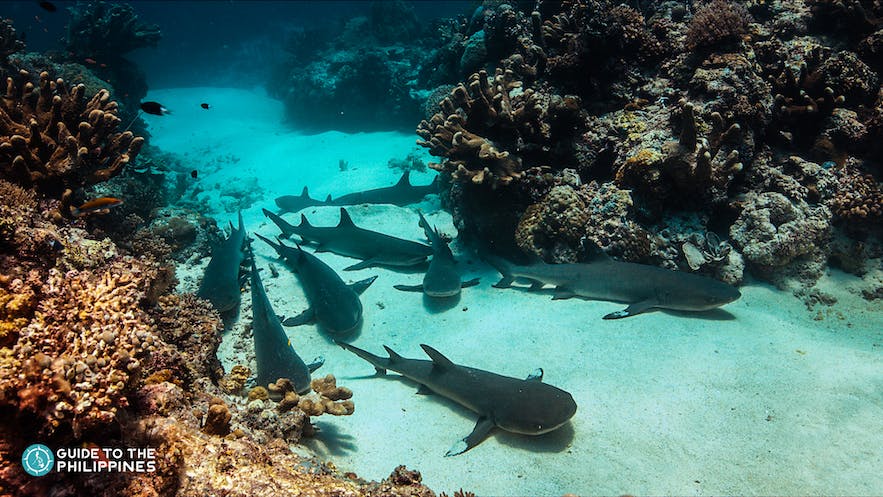 By the north-eastern part of the North Atoll is the Shark Airport dive site. It was known to be such because of the busy shark “air” traffic it portrays. Occasionally, you would find the sharks resting along the reef, side by side, as if they were airplanes parked together. Their tails would be sticking up like lined-up airplanes’ tails in an airport.

Currents can get really strong in Tubbataha and may change indefinitely along with the dive.  So, please do follow your respective dive guides. The visibility is usually around 30 meters or beyond.  It is so clear that a 70-meter drop-off would look like 30 meters deep.

It is the same case looking up. Just as when you think you are within 5 meters of your safety stop, you may still be anywhere 10 meters deep. Do check your depth gauge frequently.

If the strong current moves northward while you’re in Shark Airport, there is a great possibility that you may end up at its neighboring dive site, the Washing Machine. Down currents are quite usual here. Seafan Alley, as the name suggests, shows off a huge display of sea fans with varying colors where over 600 different species of fish play in.

Just by the north of the North Atoll is an islet where 100 species of birds made it their home.  It is an off-limits area because it is one of the remaining safe breeding habitats for seabirds within South East Asia.

On the south-western side of the North Atoll is the Malayan Wreck. Some say that it had sunk either in the late ’70s or early ’80s. The wreck used to peek out of the water decades ago, but most of it now is underwater. The huge engine is still quite intact, and the wreckage has been a home for many coral and fish species.  Around the area are resident sea turtles, sweet lips, and a huge school of jacks.

While you’re within the southern tip vicinity of the North Atoll, it is customary to visit the park rangers at the Ranger Station. The park rangers protect the park from illegal fishing and illegal collection of marine life within Tubbataha.

There is usually a dozen of them combined that you could meet from the Philippine Navy, Philippine Coast Guard, Municipality of Cagayancillo, and the Tubbataha Management Office. Do remember to bring cash in case you’re interested in purchasing available souvenir items. 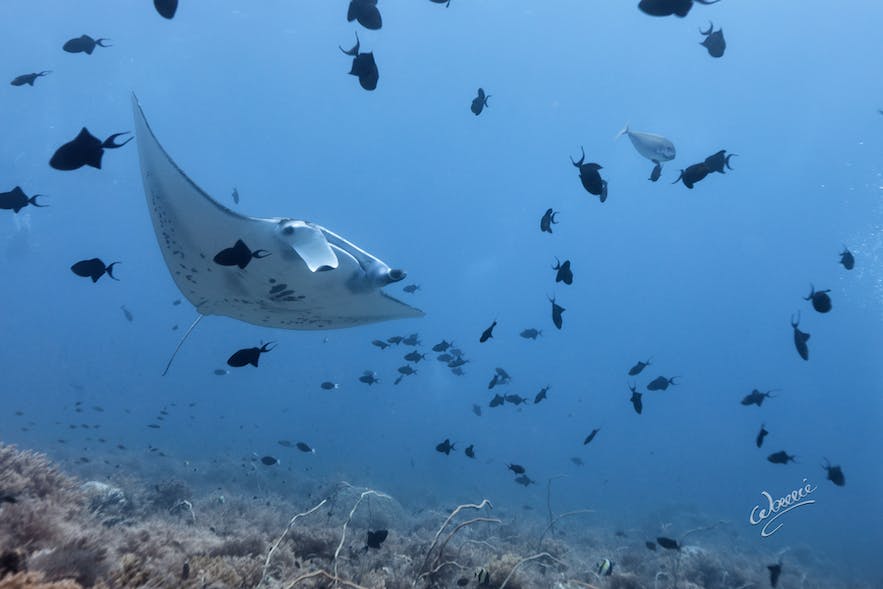 Over to the South Atoll are seven dive sites, one of which is Black Rock. Within this area is a concentration of cleaner wrasse fishes which bring in families of manta rays. The dive guides will brief you on where the cleaning stations are. So, please refrain from entering the boundary of these cleaning stations, most especially if the mantas are present for the wrasses’ free cleaning service. 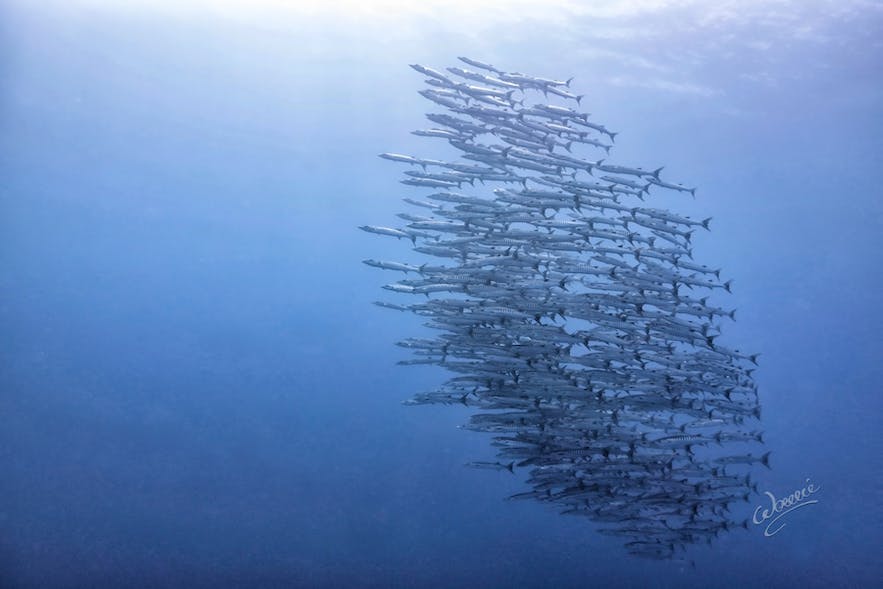 One of the best dives sites in the South Atoll is the Delsan Wreck. The shipwreck is still intact, and a huge portion of it still sticks out of the water. However, the shipwreck is too shallow for scuba divers to visit. If you have a telephoto lens or a pair of binoculars, you will find birds resting on it.

Its anchor rests farther away from the shipwreck and is the usual place where the dive begins.  For most divers, the Delsan Wreck dive is described as their Disneyland, “their happiest place on earth.”

Most of your dives here will be by its huge wall where you will have the chance to meet 23 known shark and ray species, some of which are whale sharks, tiger sharks, white tip, silvertip, blacktip, hammerhead, nurse sharks, manta rays, devil rays, and eagle rays.

There is an area along the wall that some call either the “crack” or the “corner,” where most of the action happens. The corner’s bottom is around 60 meters deep.  There was once a moment approximately 45 meters deep in that corner, where we witnessed a pack of sharks going for the lead’s pectoral fins, which we suspect to be the female shark. It could have been a courting stage which could have later moved on to mating.

When you happen to be in the blue, be mindful of your depth and distance from your buddy. Without any reference from the reef wall, you might find yourself beyond your recreational diving depth.

From time to time, you should come across a great school of batfish.  From afar, you could mistake them for shiny silver coins, and if you are lucky enough, find the school of golden batfish.

At the southernmost area of the South Atoll is also an islet where a lighthouse stands. It also is a safe home and a safe breeding habitat among the seabird species there. 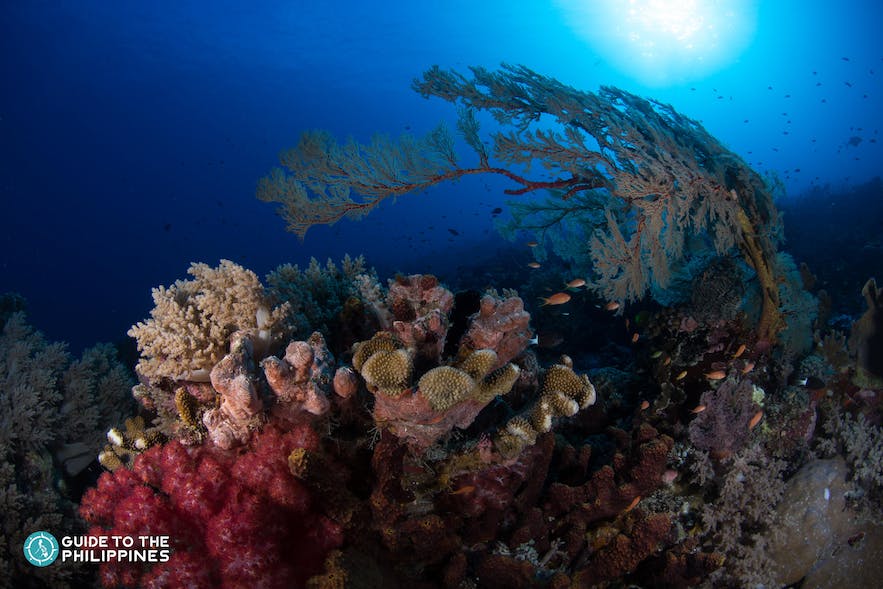 If the current permits, Jesse Beazley Reef, could be part of your itinerary.  It is a relatively smaller coral structure to both the North and South Atolls, but the coral garden it bears is just but spectacular.

Regardless of which area you go to within Tubbataha, you will be amazed by its garden of corals. There are 360 coral species in the area, which is half of what the world carries today. 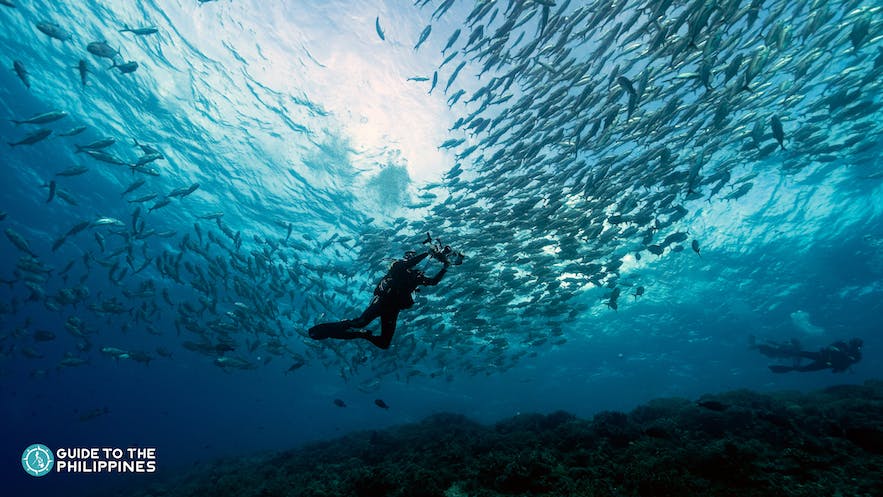 As you pack for this Tubbataha Reef diving adventure, there are strict rules which guests should adhere to while being in the park:

As the old saying goes, Tubbataha Reef is a no-take zone, but you could definitely take your great memories home with you. 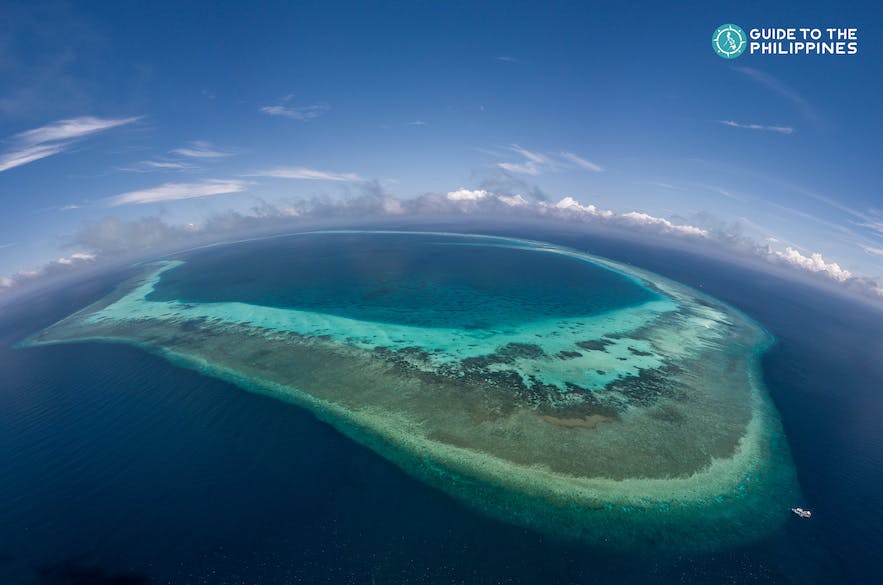 Plan your Tubbataha Reef diving tour with this guide and check out Puerto Princesa tours that you can add to your itinerary. Check out other reasons why you should visit the Philippines