The Philippines, home to more than 7,000 postcard-worthy islands and beaches like Boracay and Palawan, offers more than its white sand and azure waters. The country is also home to many caves that are perfect for spelunking if you’re looking for new experiences. Aside from record-holder cave systems in Asia that are on the bucket list of many adventurers, the Philippines also has caves that hold great historical significance.

Around the world, caving or spelunking is a well-liked outdoor adventure activity. The Philippines' caves are well known for their distinctive characteristics, which include enormous stalactites and stalagmites, the presence of bats, and other species that are best explored in Philippines cave tours and  Philippine hiking tours. This list summarizes some of the must-visit caves in the Philippines that can be explored by beginners and experienced cave enthusiasts after fulfilling the needed Philippine travel requirements. 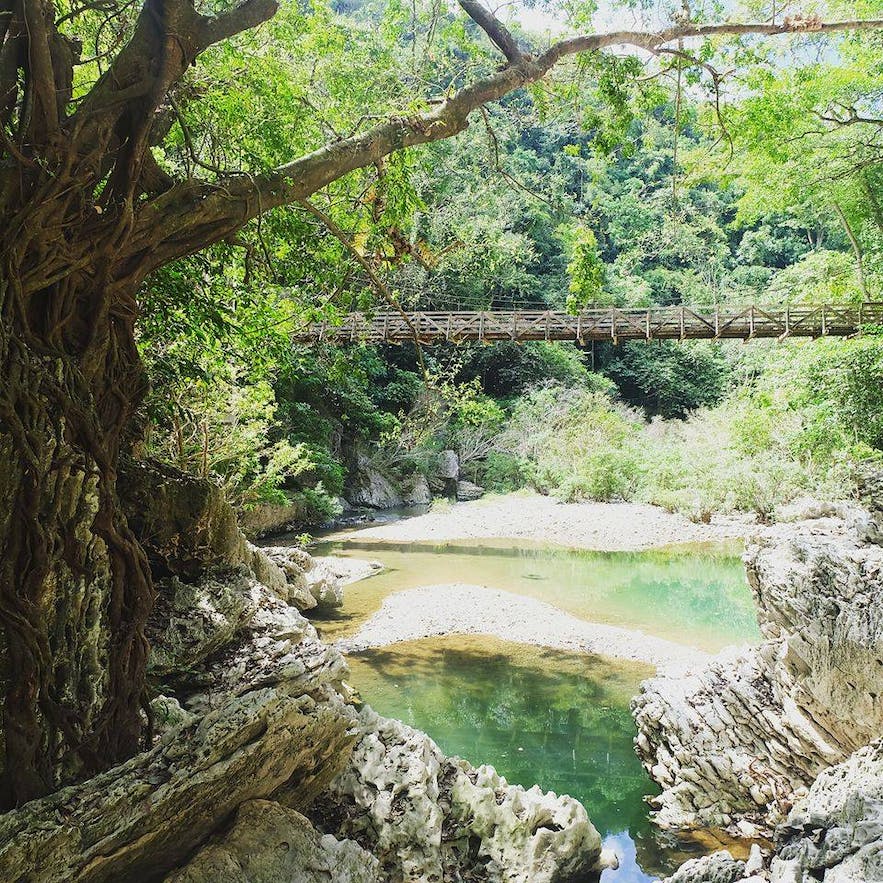 Biak-na-Bato National Park, located in San Miguel, is one of the most popular tourist spots in Bulacan, a province located north of Metro Manila. The 2,117-hectare park is famous for its historical significance since it used to be a mountain refuge for Filipino rebels who fought the Spanish army. The forest of Biak-na-Bato is home to endangered wildlife, particularly the migration of fruit bats and a diverse set of birds in the area.

Today, the park is a haven for travelers who wish to reconnect with nature by going on hiking trips and exploring rock formations, caverns, and rivers. It has a cave network of roughly 116 caverns, however, only around 12 of these are open to the public.

Jackpot Cave is located in Peñablanca, Cagayan, a haven for spelunkers due to the number of known caves and ancient rock art in the province. With a studied depth of roughly 115 meters and a surveyed length of 355 meters, the Jackpot Cave is now the country's second deepest cave.

Expect to get wet and muddy, so wear comfortable clothing. In some parts of the cave, hiking barefoot is required to have a better grip on the rocks. The cave is perfect for experts wanting to try more complex cave activities and may be accessed with the help of the Sierra Madre Outdoor Club (SMOC). 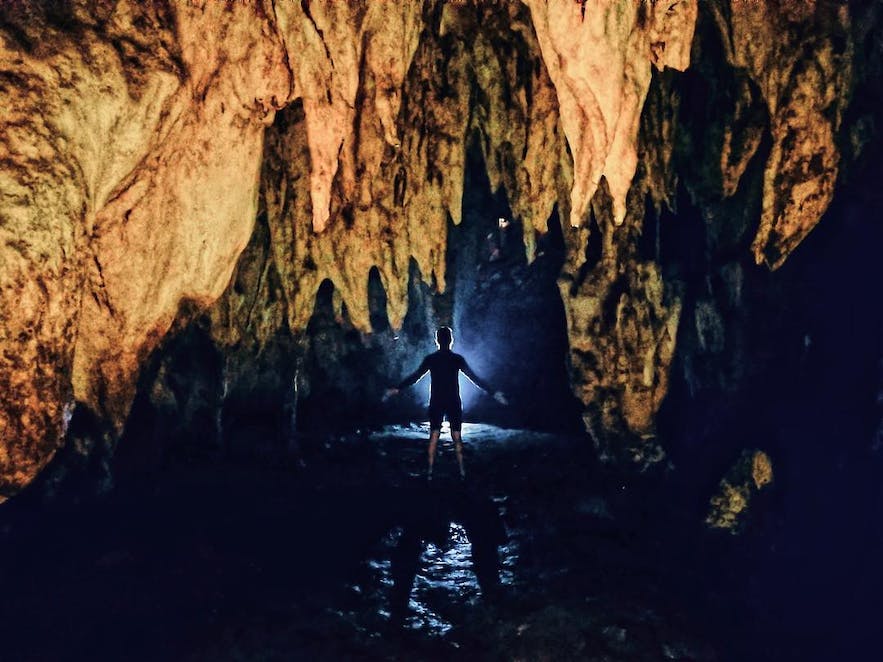 The Aglipay Caves is located in Baranggay Villa Ventura near the little town of Aglipay, a municipality in the landlocked province of Qurino. The caves cover 101 hectares of pristine forest and are notable for their well-preserved rock formations. The cave's stalactites, stalagmites, and flowstones are built by minerals induced by dripping water. The Aglipay Caves were found in 1983. It was named after Gregorio Aglipay, the founder of the Philippine Independent Church.

The Aglipay Caves are made up of roughly 37 interconnecting chambers, of which only 8 have been explored and are accessible to the public. The most feasible entry to the Aglipay Caves would begin with chamber 1, followed by a short hike to chamber 8, followed by a climbing adventure to chamber 3. You will emerge in a roomy chamber after you have finally reached the 8th cave.

You can engage in more fascinating activities outside the caves. If you want to unwind and have brought some food, there is a picnic area with shelters. There is also a butterfly sanctuary in the area. You can also go camping or bird watching. 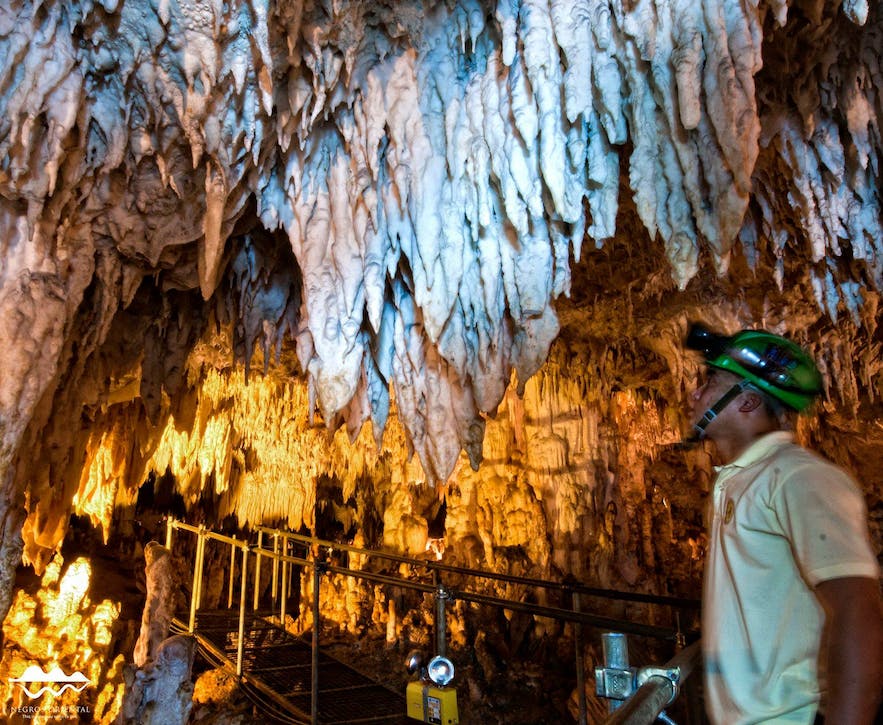 Odloman Cave is one of the beautiful caves in the town of Mabinay, Negros Oriental, also known as the cave capital of the Philippines and home to Dumaguete and Apo Island. The numerous caverns in Mabinay are the result of the town's geologic profile, which includes extensive karst and limestone rocks. With over 400 caves in the town of Mabinay alone, Odloman Cave stands out as it is the second largest cave in the Philippines, measuring 8,870 meters.

In order to get to the entrance of the cave, you have to swim across an underground river or enter through a hole in the roof. It will be worth the experience as the cave features enormous galleries that are linked by short and narrow passages.

Sturdy footwear is recommended for beginners. Take note that slippers and sandals are not suggested due to the nature of the caverns. Also, some paths to this Philippine cave is best explored by experts in spelunking. 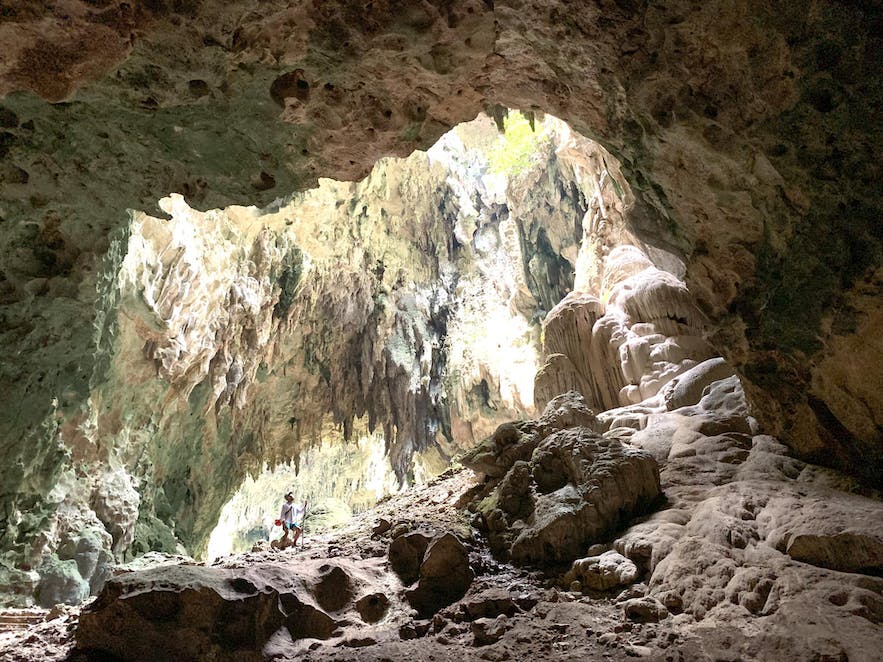 The Callao Cave is a well-known tourist attraction in Cagayan and the local government has classified it as an Eco-Tourism Zone. The cave's passageways make the journey serene, or callado, as the Spaniards termed it, thus the name of this attraction. The cave is known to house the oldest known remains of an early human species in the Philippines.

Callao Cave features nine chambers and formations, two of which were closed due to an earthquake in the 1980s. Travelers will need to conquer a 184-step climb up a staircase to reach the entrance of the first chamber. The Chapel, which is the name of the first chamber, is a well-lit cave lighted by a gap above the cavern floor. The locals converted it into a chapel due to its cathedral-like form. It is the only Roman Catholic chapel inside a cave, and the altar is a rock structure. 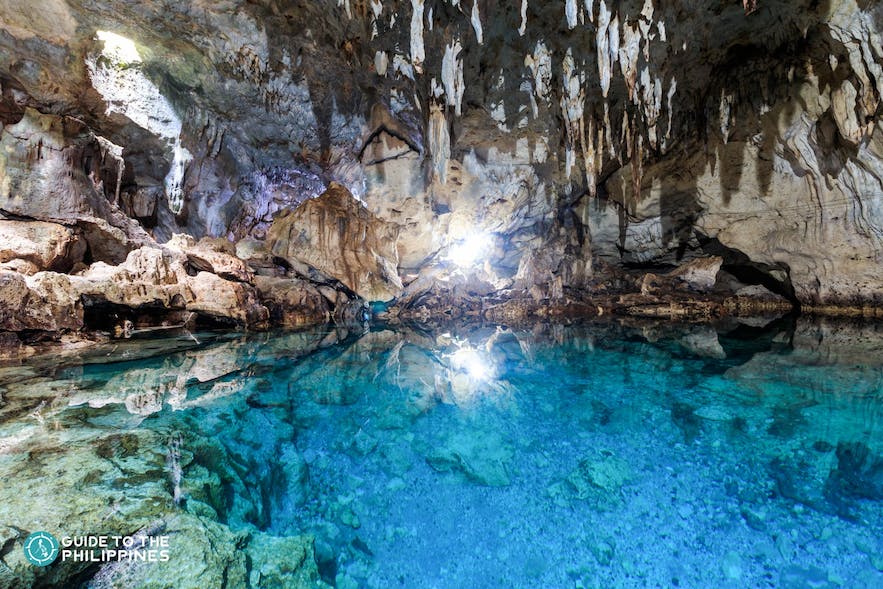 Hinagdanan Cave, which translates as "laddered" in Cebuano, is a 100-meter-long cave located in Dauis, a coastal municipality in Bohol. According to locals, the cave was founded by accident by its landowner, who constructed a ladder to explore its interior after seeing an odd hole in his property. It was utilized as a hideaway by locals during World War II to escape the Japanese Imperial Army. Now, it’s one of the most popular tourist spots in Bohol, often visited alongside landmarks included in a Bohol countryside tour.

Hinagdanan is a karst cave, which means it is made of limestone. It has multiple parallel stalactite and stalagmite formations as well as a freshwater lagoon perfect for taking a dip. The cave is naturally lighted by sunshine filtering through the ceiling openings, which also serve as a nesting spot for the local swallows.

The enormous underground cavern also features a pond that appears ominous but enticing. The cave's entrance is a small, slender opening. It won't take long, though, until the tunnel reveals a huge cavern. You can enjoy the freshwater lagoon from here.

Tabon Caves, dubbed as the “cradle of civilization” of the Philippines, is a group of caves known for their anthropological and historical value. It is located on the western coastline of Quezon town in southern Palawan, one of the best islands in the Philippines.

Presidential Proclamation 996, issued in 1972, designated the cave complex and all of Lipuun Point as a site museum reservation in order to conserve and preserve the caverns and their immediate surroundings from future damage. Apart from being one of the top Palawan tourist spots to visit, the Tabon Cave Complex was also put on the Philippines' tentative list for future UNESCO World Heritage Site candidacy in 2006.

Tabon Caves is one of the few places in Southeast Asia where Homo Sapiens fossils have been discovered. Between 1962 and 1966, anthropologist Dr. Robert Fox and a team from the National Museum of the Philippines unearthed the Tabon Man, one of the Philippines' earliest known human skeleton remains, dating back to 14,000 B.C. The Tabon Caves also housed a plethora of valuable archaeological items like the Manunggul, a secondary burial jar that has been declared a National Cultural Treasure. 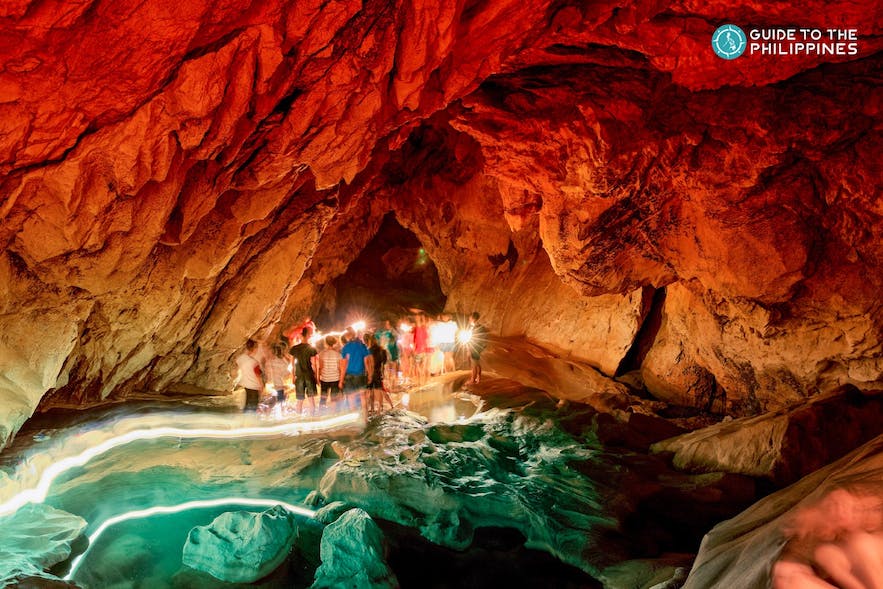 Sumaging-Latipan-Lomyang Crystal Cave is located in Sagada, tucked in the Cordillera mountains of North Luzon near Baguio, and is known for hanging coffins and scenic views. The cave is currently the deepest cave on this side of the Pacific, with a vertical range reaching 163 meters from its mouth. It was used by Pinoy guerillas as a fortified stronghold during World War II.

Today, the cave is one of the top Sagada tourist spots. Through its six gates, you will have access to some of the most fascinating natural formations it displays. You may be able to see remarkable rock formations like "The Curtain," "King and Queen," "The Serpent," and other unique sightings. As you delve further into the cave, the Crystal Cave shows off even more splendor in the shape of beautiful columns that reach the cave's roof.

Wear comfortable active wear because you'll be getting wet and dirty. You will need to hike barefoot in some areas in order to have a stronger hold on the rocks. The cave connection tour will take around a few hours, during which you will be swimming through underwater lakes, rappelling down underground rock sides, and crawling through tiny passageways. 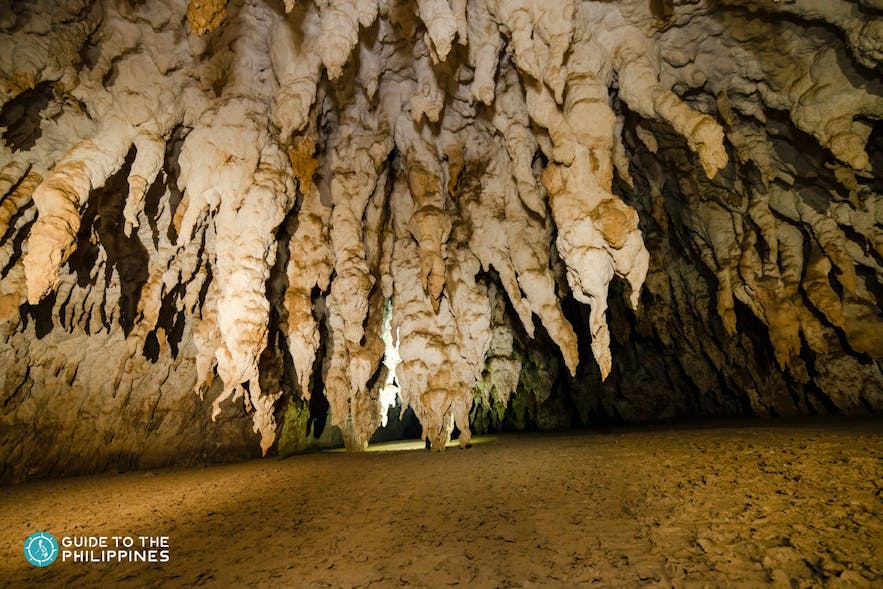 Eastern Samar, a province situated in the Eastern Visayan region and is known for being a pearl culture farm, is the location of the Calbiga Caves, a network of 12 beautiful caves in the Philippines that extends to over 2,968 hectares. The majority of this cave system, which is the biggest in the Philippines, the second largest in Asia, and the third largest karst formation in the world, is renowned for its speleothems and the diversity of its cave life.

The main chamber of Calbiga Caves is Langun, followed by Upper Gobingob which has also been fully explored. That is why another name for this cave system is Langun-Gobingob Caves. This cave system is home to several bat species, cave crickets, cave spiders, centipedes, snakes, and red and white crabs.

Inside, you will be taken to an otherworldly landscape with enormous chambers that resemble coliseums and are built on top of subterranean lakes, rivers, and natural springs. It is highly recommended to wear gum boots to have some sort of protection against the ankle-deep bat guano crawling with beetles and muddy areas of the cave. 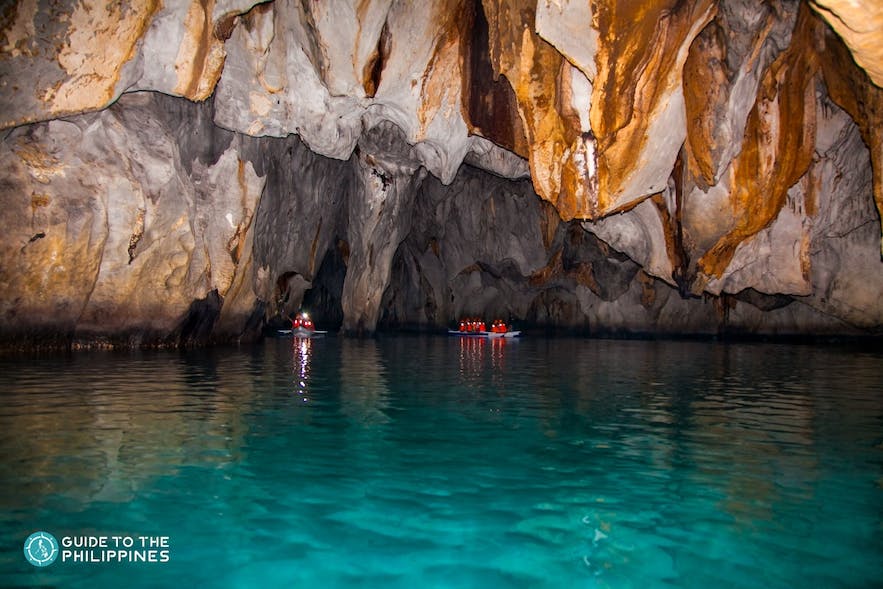 The underground river is also known for its amazing limestone karst mountain landscape and cave system, making it the most famous cave in the Philippines and a popular eco-adventure destination. It is home to more than 800 plant species and a variety of bird species, most of which are native to the area. There are also a variety of animal species such as bats, reptiles, frogs, and sea cows that have been documented in the region.

Explore the Best Caves in the Philippines 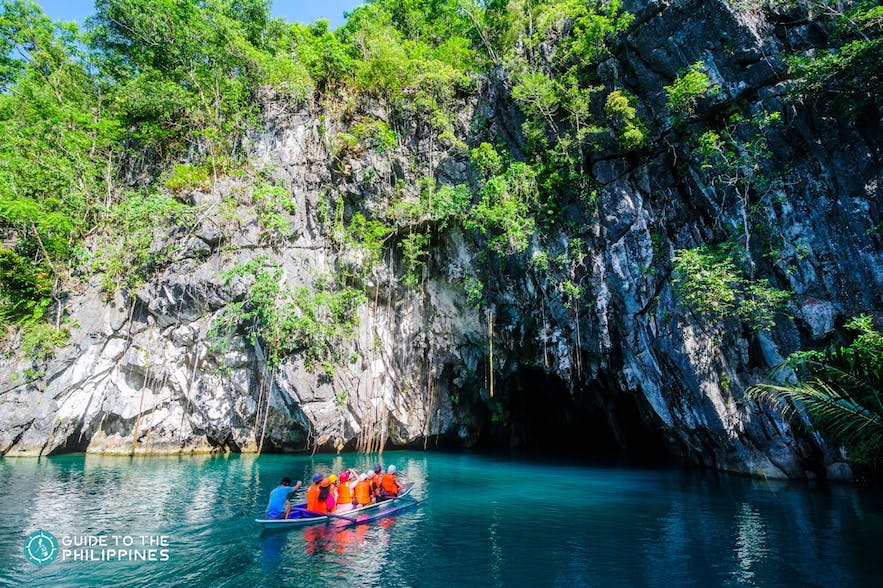 When we think of caves, the first things that come to mind are mysteries, unparalleled adventure, and nature's best-kept secrets. Caves are without a doubt one of nature's most amazing masterpieces, never failing to awe us with their beauty.