Guide to Diving in Verde Island Passage: The Center of the Center of Marine Biodiversity of the World

For enthusiasts of scuba diving tours for certified divers, you may have heard about the “Coral Triangle,” but what does it all really mean? If we were to correlate that above water, it would simply be described as the “Amazon of the Ocean,” where over 500 species of reef-building corals thrive and a third of the world’s coral-reef fish species and 6 of the world’s 7 species of sea turtles reside.

The Coral Triangle hosts 30% of the world’s coral reefs that is within the vicinity of the Philippines, Indonesia, Malaysia, Papua New Guinea, the Solomon Islands, and Timor-Leste.

Luiz Rocha, a coral reef scientist from the California Academy of Sciences, said that the “Coral Triangle is a very stable region, even through geologic time,” and that stability referred to its persistence among conditions it went through over a period of 30 million years. The center of this biodiverse area is no other than the Philippines, according to a group of marine conservationists.

Then in 2011, Dr. Terrence Gosliner, the expedition leader and Dean of Science Research Collections at the Academy declared that “Verde Island Passage,” a strait worth 1.14 million hectares between Luzon and Mindoro, is the “Center of the Center of Marine Biodiversity," and it goes without saying, “in the planet.” It's one of the best diving spots in the Philippines and should be on the bucket list of every diver who visits the country.

The Verde Island Passage connects the South China Sea with the Tayabas Bay and Sibuyan Sea. At the very heart of this strait lies Verde Island. The island’s isolation was also its protection from much exploitation.  In fact, it was only in 2019 that its resident locals in its barangay called San Agapito, were supplied with electricity via solar power.

The name of the island is derived from the name, Captain Juan Verde, who discovered the island together with his Spanish-Filipino group back in 1570. People believe that they were the ones who Christianized the resident natives back then.

If you happen to have time to visit the island itself on foot, you may find a huge landmark at the top of the mountain in memory of Captain Juan Verde, where it writes La Isla Verde. 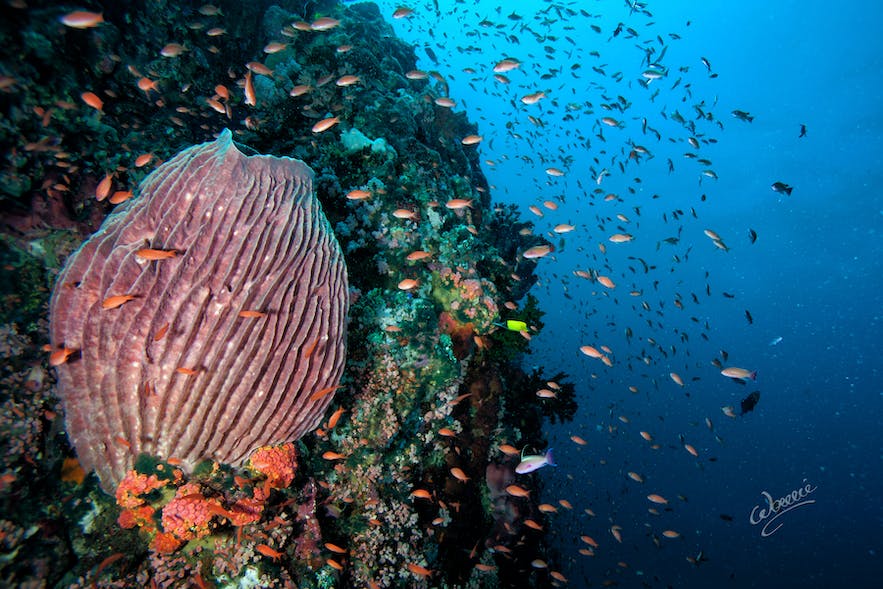 400 meters off the south-eastern corner of Verde Island, is the so-called San Agapito dive site.  It is accessible via Puerto Galera and Anilao by its respective bangka (boats) for 45 minutes and 2 hours, respectively.

Two to three dives are what it takes to cover most of the dive site, thus, a day trip is a usual itinerary when visiting San Agapito. Dives are best set in the morning when the seas are calmer. It also paves a safe way for the boats’ earlier return to either Puerto Galera or Anilao to avoid the rough seas in the afternoon. 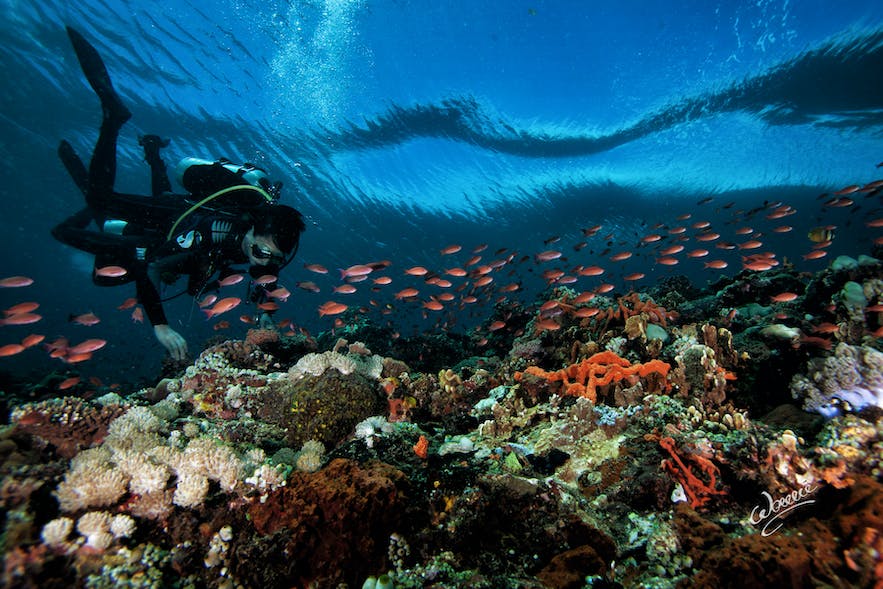 The San Agapito dive site is a seamount that has three peaks with one always peeking out of the water by approximately 2 meters high from the surface depending on the tides. The third pinnacle lies 18 meters deep. The usual flow of current in this part of the Verde Island Passage can be extremely strong. Thus, seasoned advanced scuba divers are mostly welcome here.

The direction of its current would determine whether you could dive either the sea mount's east or west side. If in case the current is weak to none, it is just but perfect and recommended to dive all around the seamount.  The point of entry is always via boat and it is best determined by the boat crew on which side of the seamount they should drop you off.

In case you’ve missed to get to the initial meet-up point underwater because you’ve been swept away by the current, make your safe ascent with your safety balloon inflated. The boat should be able to pick you up and make another entry if it’s possible to regroup with your dive buddies underwater.

If there is a strong current coming from one side, then the usual dive itinerary is to go deep on the opposite side and make a zigzag ascent. There are cases when current directions change along the dive, so please do follow your respective dive guides for the best possible route.

Depending on where you may be at a certain time, down currents are highly possible too. So, please check your air, depth, and deco times periodically. The demarcation between no current and strong flow of current may be very visible via the movement of the fusiliers. If you see them tumbling all around, you know that that is the demarcation line you shouldn’t cross. 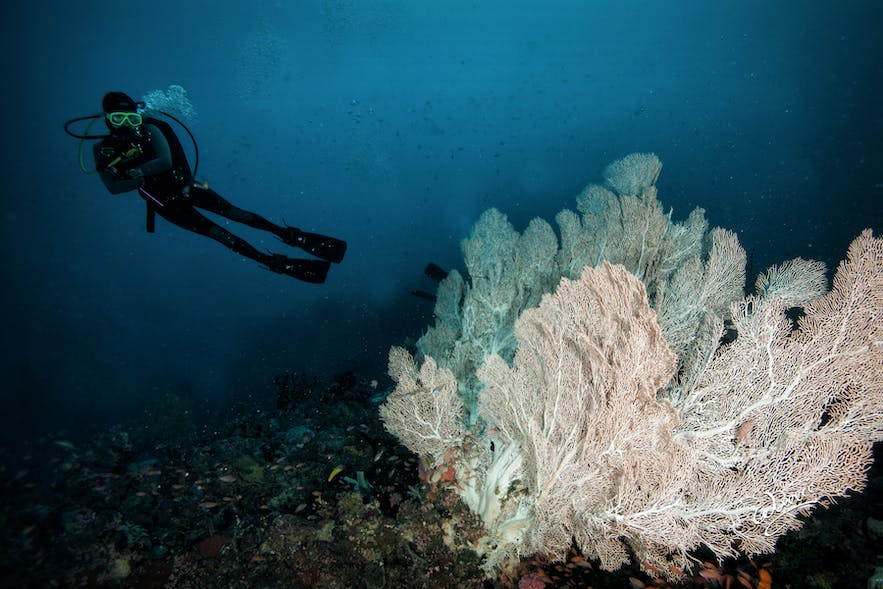 As most would say, San Agapito diving is somewhat a small fraction of how Tubbataha Reefs would look like without the sharks and the rays. It has a wall that stretches 70 meters deep.  As you descend, the bigger the gorgonians will be along your way. I have seen some coral fans 2 meters high and 4 meters wide. You can literally hide behind it.

There are friendly juvenile sea turtles that simply do their round of eating, breaching, swimming, and sleeping on a periodical basis. Please do away with the temptation of having to touch them. Such creatures rely on bio-films, a protective slime, to keep out of infection. Human contact simply compromises these bio-films, making them vulnerable to harmful bacteria.

These turtles are mostly found on a small plateau hidden from the currents behind a huge wall.  At the base of those walls are interesting huge blocks of rocks toppled on top of each other.  There are some reef fish, eels, nudibranchs, frogfish, seahorses, and more that hide among its crevices that are great for macro photography.  While you may fancy looking down at this beautiful garden, do look up from time to time.

You will also find a school of jacks, emperors, and singing mackerels, including families of big tunas and groupers lurking around. The best spectacle I always look forward to seeing on this dive is the massive display of swimming red-orange colored anthias. It is as if it was raining fish all over you! There is a chance that you’ll see them covering almost a huge part of the wall. From afar, you would think that the wall may be pulsating but it’s only because the school of anthias has fully covered it. 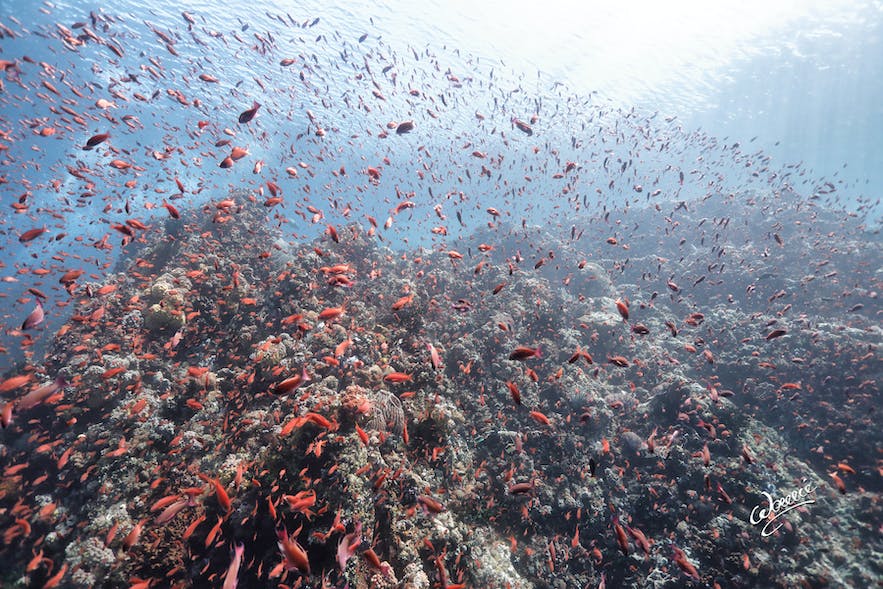 There are huge barrel sponges as tall as 1.5 meters with a diameter of almost a meter, that make good subjects among wide-angle photos against a background of swarming brightly colored fusiliers against the clear deep blue facade of the ocean.

It is beautiful seeing these barrel sponges fastened well along an almost vertical slope as if they were specifically put there as vases for display. It is most likely that you will find spinoid worms along the external layer of the barrel sponges.

It is a good indication that the waters here provide a lot of floating organic particles and plankton which these worms intercept as these barrel sponges siphon the food out of the water. San Agapito’s slopes are abundantly growing different corals of almost all kinds that you could barely see any sand patch, which makes it difficult among photographers who fancy custom white balance.

By the time you reach 40 meters, you would have crossed a thermocline, and the marine life right there is still so rich, unlike other dive sites where marine life tapers off at the same depth. 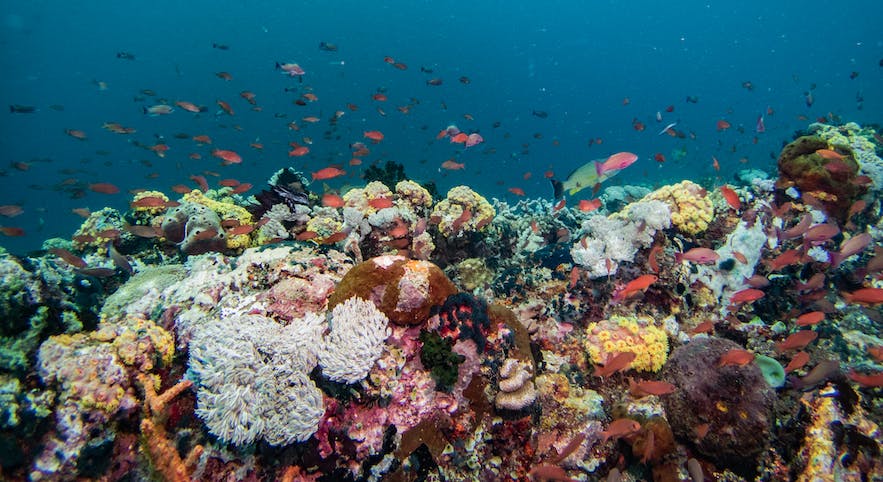 Do bring a torch for safety purposes. Other than the part that it is darker when you’re on the side of the seamount that blocks the sun, it’s always interesting to uncover the real colors of the marine life at that depth once you shine your torch on them.

The visibility can be farther than 30 meters at times so be careful when you plan your ascent to your safety stop. It may be so clear that you think you are within 4 meters of your safety stop when you are actually still 10 meters away from the surface.

Make sure you have your long safety balloon with you because you are within one of the busiest sea lanes in the country. So, always be aware of boats before breaking the surface.

San Agapito is truly a great place to visit given the fact that you know that it sits in the middle of the Verde Island Passage.  Once you do, I won’t have to tell you the reason why. So, if you happen to be diving in Puerto Galera or Anilao, make sure you spend a day on Verde Island.