9 Best Surfing Spots in the Philippines with Travel Tips

By Marky Ramone Go
Verified Expert
Jump to chapter
IMPORTANT: The destinations featured in this article may have COVID-19 travel restrictions and requirements. Check our COVID-19 travel advisory page for details.

Explore the top surfing spots of the Philippines! Where are the best places to surf in the Philippines aside from Siargao Island? Here are some of the highly recommended surfing destinations in the country.

With over 7,000 islands and a coastline of over 36,000 km, it’s no wonder that surfing is one of the best water activities in the Philippines. Cloud 9 in Siargao has been consistently rated as one of the best surfing spots in the world, but it’s not the only place where you can get stoked in the country. 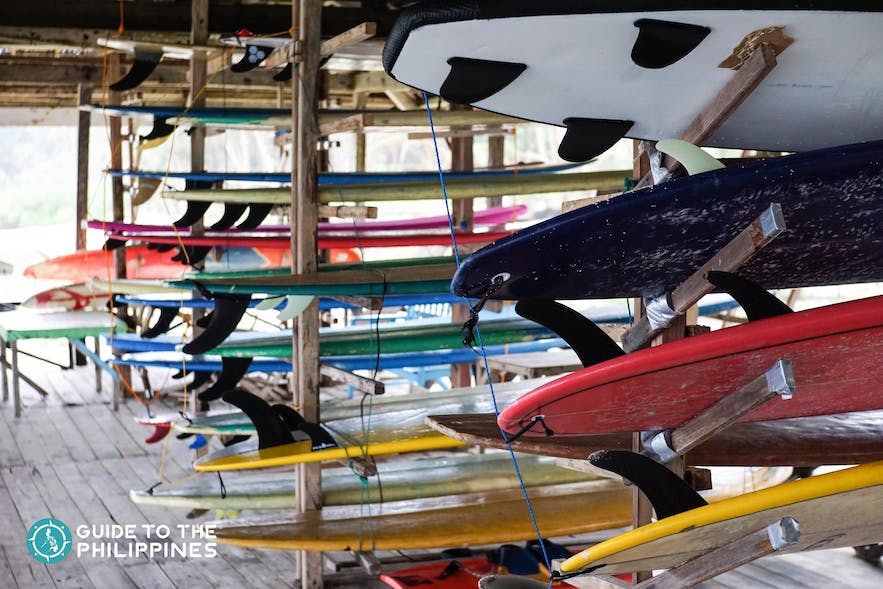 If you are going on a surfing trip in the Philippines, check out our recommended surf spots from Baler and San Juan in Luzon and other parts in the country and the best time to go there. Whether you are a seasoned surfer or a newbie wanting to learn the sport, the Philippines has surfing spots perfect for you. Lanuza Bay’s underwater is one of the most heavily concentrated biodiversity marine systems in the country. There are several rare aquatic species you can find here. Above water, the bay of Lanuza also offers another delight in the form of massive swells that makes surfers happy to no end.

Note that it can be a bit quiet here, with most commercial establishments closing at 6 pm. If you want more excitement, visit in November, when the Lanuza Surfing Festival is held.

Best time to surf: November to March is the peak of surfing season in Lanuza. 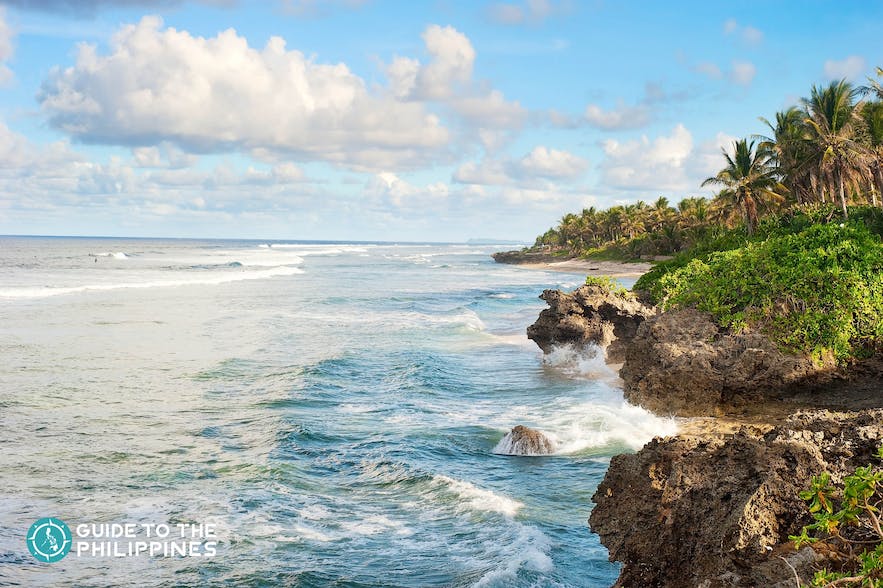 Best for: Intermediate to advanced surfers

It took a while for these two places to recover from the battering of super typhoon Yolanda (Haiyan) in 2013, but it nevertheless remained on top of the list of avid surfers from around the Philippines.

Guiuan was first to put this province on the country’s surfing map, thanks to its long stretch of fine white sandy beach and crystal clear waters that produce consistent, almost near-perfect barrel waves.

Calicoan Island, on the other hand, is a great place to laze around in with a cold beer in hand. This surfing destination is popular for its exposed reef breaks. Because of the complexity of the waves, and the fact that there is no channel, only seasoned surfers are advised to play here.

Uncrowded, basic, and laid back, Eastern Samar remains an off-the-grid destination for travelers, most especially surfers, who want to have an almost isolated beach break to themselves.

Best time to surf: Surf season is from the months of November to March, with the summer months best for beginners. The North-East Monsoon season that blows in the ideal swells occurs around September to October. 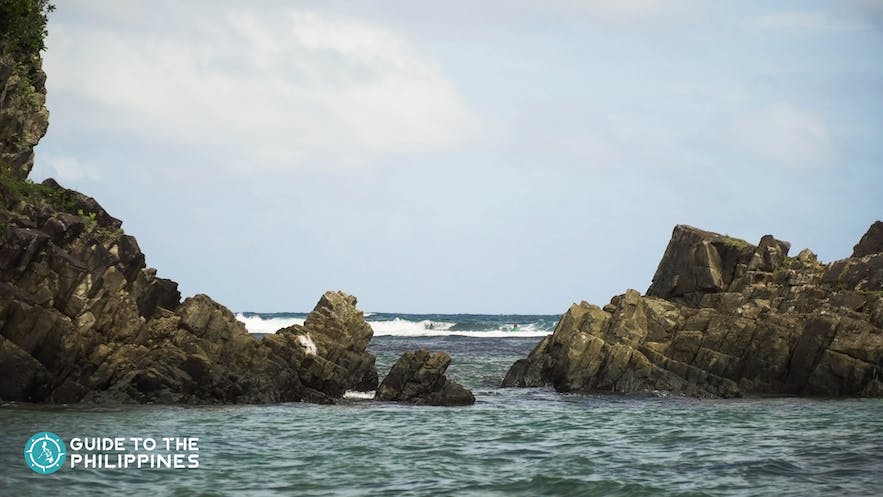 Best for: Beginners to intermediate surfers

A lot less crowded compared to Siargao, Catanduanes can easily be circled riding a motorcycle and there are a lot of places to chill and relax. For surfers, however, the beach of Puraran in Baras is the only place they want to be, as there is a consistent supply of barreling waves – dubbed “The Majestic” – coming from the Pacific Ocean.

Every year, local and national surfers join the Puraran Surfing Cup, held as part of the Catandungan Festival every October.

Best time to surf: The right-hand barrel reef breaks are great for advanced and professional surfers from July to October. There are surf spots for beginners as well, as long as there's a surf instructor. The best time for beginners to go is during the summer season, from February to June. 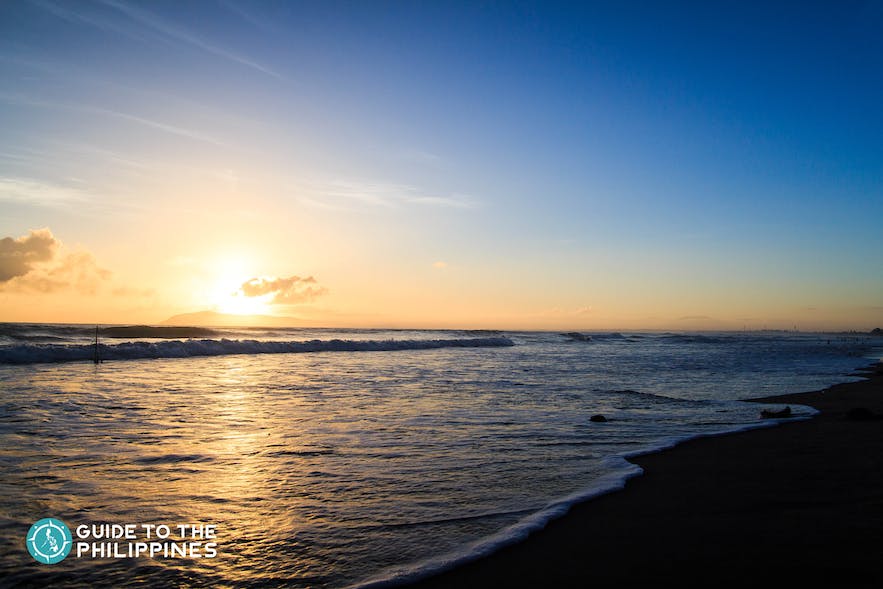 The Pacific Ocean is really one swell factory. Another beach along the coast that’s great for riding the waves is Bagasbas Beach in Daet, Camarines Norte.

Comparable to Baler because of its extended shoreline, surfing in Bagasbas is ideal for beginners because of its consistent strong waves and sandy beach. For advanced surfers, Bagasbas is an endless playground where the waves just keep on coming and surfer junkies keep on getting stoked.

Best time to surf in Bagasbas: The winds of the Pacific Ocean blows in the best waves during the months of July to January. Make sure to check the weather forecast for a better surfing experience. 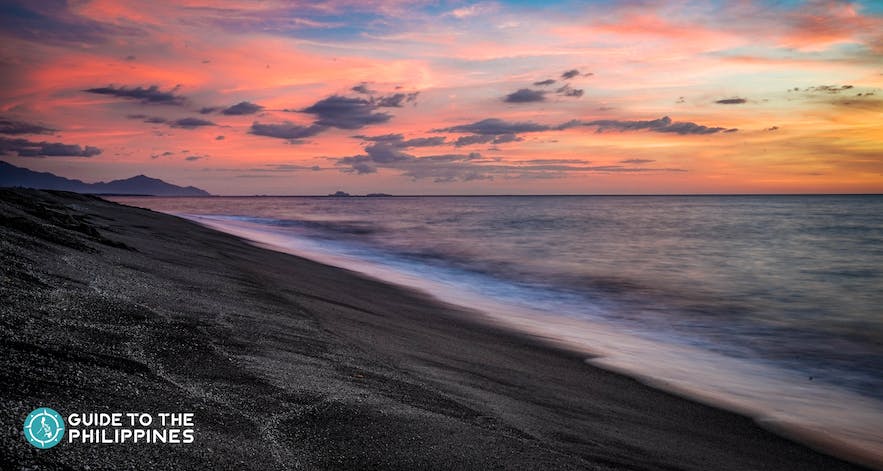 Best for: Beginners to intermediate surfers

Surfing as a sport just recently started in Zambales, specifically in San Narciso. Mostly known for longboard waves, it gets the same swells as La Union during typhoon season.

Due to its relative proximity to Manila – a 3-hour drive – it is starting to become a go-to surfing destination, as well as a place for board sports (skate, skim, surf, and bodyboard), for many people based in the metro.

More than surfing, the jovial atmosphere on the tourist spots in Zambales has become a magnet that attracts strangers to become friends. Similar to most surfing spots in the Philippines, the beach vibe in Zambales draws artists, musicians, poets, writers, and everyone in between whose common denominator is the desire to learn or practice the sport of surfing.

While the weather conditions aren’t as consistent as the ones in Siargao, Bagasbas, and Baler, there are a lot of fun activities to do while waiting for the swell. 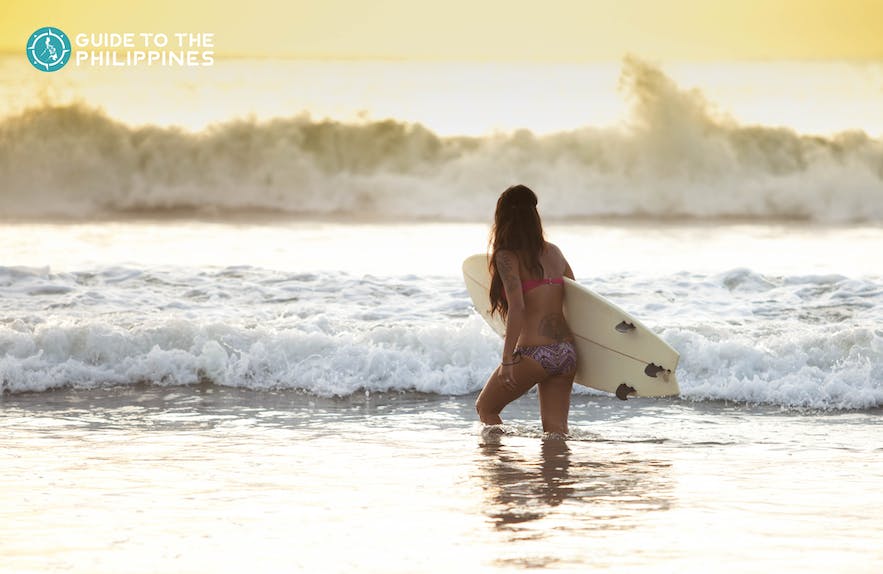 Don’t let the dark sands of the beach in Real, Quezon fool you into thinking that not much is happening here, surfing-wise. Once surf season starts, the town of Real in Quezon Province – a 3-4-hour drive from Manila – attracts beginning surfers from all over the country, particularly those based in Metro Manila.

The beachside condition in Real can be compared to the ones in Baler and La Union a decade ago, where tourism development was still at a minimum level.

If you are looking for surfing tours that is only a short drive away from Manila and have the waves of Baler and La Union on a good day, Real is your best option. It has a smaller crowd, too, compared to other surf destinations in the country.

Best time to surf in Real: Surfing season in Real is from August to March, with the best waves from October to February. 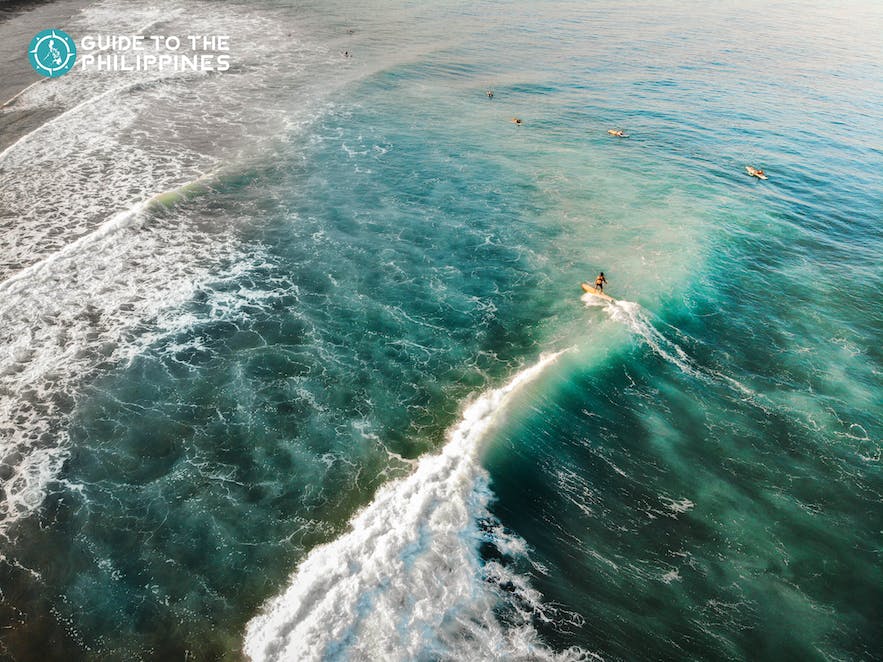 San Juan has undergone rapid development in the last few years brought about by the popularity of surfing here. Even former Philippine President Gloria Macapagal Arroyo was featured in the news showing her completing a long ride over the waves of San Juan. It doesn't hurt that there are a lot of tourist spots in La Union.

Resorts in La Union ranging from backpackers to luxury line up the long coast of San Juan. A thriving community of local surfers has produced some of the best in the country, many of whom have participated in various competitions around the world.

If you want to learn how to surf, there are surf camps scattered all over San Juan, including well-known surfer Luke Landrigan’s Billabong Surf Camp. You’ll get to check out San Juan’s can’t miss surf spots including The Point (for expert surfers), The Bowl (expert surfers), and The Beach Break (for beginners).

Other spots not far from San Juan include Darigayos (best from May to September), Bacnotan (good from October to April), and Car-rille (November to March).

Best time to surf in San Juan: Swells in San Juan peak from July to October and November to March with competition-level waves coming in from December to January.

“I love the smell of napalm in the morning. It smells like…victory,” so goes the classic line in the 1979 movie Apocalypse Now, uttered by Col. Kilgore. A story of the Vietnam War, the movie was not actually filmed in Vietnam, but in the small town of Baler in Aurora, a 6-hour drive from Manila.

In the movie, Colonel Kilgore had his men surf at what is now known as Charlie’s Point, while locals watched from a distance. When the crew finished filming, the surfboards they left behind were used by the local children who taught themselves to surf with it. Thus was born the sport of surfing in the Philippines.

Today, surfing is becoming a popular weekend activity; both for travelers coming from Manila, or foreign travelers looking for the best stoke. They go to Baler to either surf, learn to surf, or just surf all over again not only at Charlie’s Point, the most popular surf spot in Baler, but also at Cemento, among others.

Hostels, hip cafes, and artisan restaurants now line up the long shoreline of Baler and have become Baler tourist spots, creating a communal vibe where travelers, artists, and locals bond over their shared love for surfing.

Best time to surf in Baler: All-year-round but the months from October to March brings in massive northerly waves. 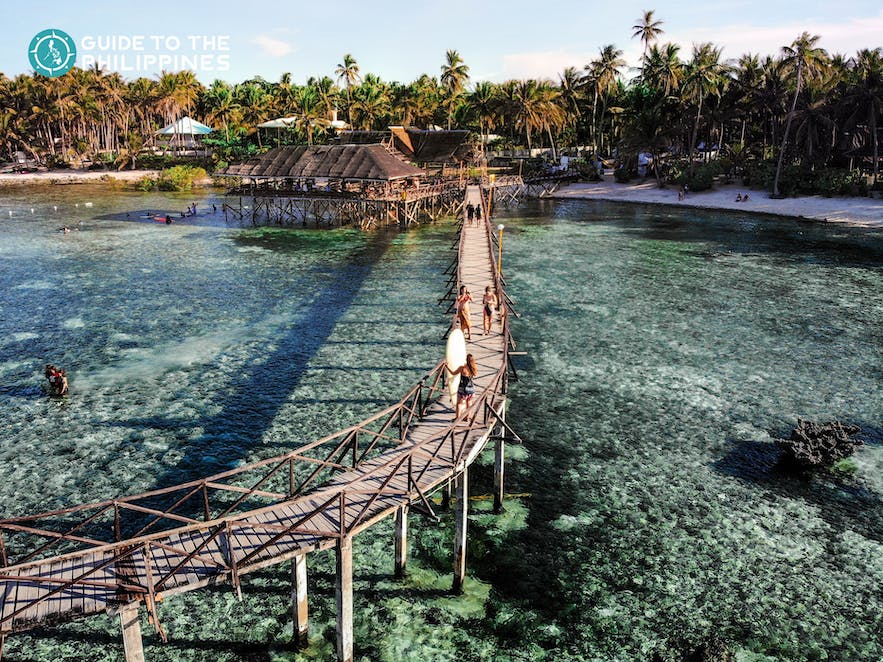 Best for: Intermediate to advanced surfers

Known worldwide for its perfect barreling right-hand reef break, Cloud 9 in Siargao is the number 1 destination for expert and newbie surfers alike. Go around the island and you’ll meet foreigners in Siargao resorts who visited the island and never left.

What’s not to like? There are a number of Siargao tourist spots that you can visit, such as natural pools, hidden lagoons, lush countryside, and many cool places to hang out and dine with friends.

The biggest draw, of course, is the surf spots that range from challenging reef breaks great for experts, to gentle waves perfect for beginners.

When on the lineup in General Luna, where Cloud 9 is located, keep on the lookout for celebrities known to surf in Siargao, including Red Hot Chili Peppers’ lead singer Anthony Kiedis.

Best Time to Surf in Siargao: The Siargao surfing season starts in September and lasts until May, while peaking from November to February where perfect barrels become a regular occurrence at the lineup.

Ride the Waves of the Philippines! 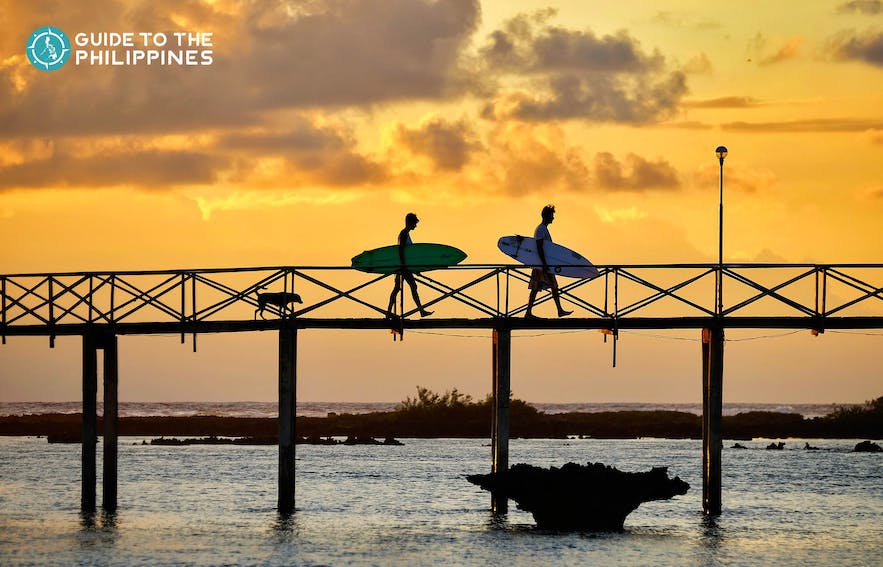 Surfing in the Philippines may be only in its infancy stage compared to surfing in other countries. In the last few years, however, it has steadily grown and has achieved a large following. Filipinos have already started joining international surfing competitions, debuting at the International Surfing Association World Surfing Games in Japan last September 2018.

When you are planning a surfing holiday, make sure to check out not only Siargao, the surfing capital of the Philippines, but also the other surfing destinations in the country as well.