Book Tours
Explore the Philippines
Group Travel Inquiry
Book your trip now
Jump to chapter
1. Marvel at the Majestic Paoay Church2. Be in Awe by the Bangui Windmills3. Go Sandboarding at the La Paz and Paoay Sand Dunes4. Discover Kapurpurawan Rock Formation5. Walk the Halls of Malacañang of the North6. See the Sinking Bell Tower7. Find Peace and Quiet at Paoay Lake8. Taste the Best of Ilocano Cuisine9. Visit the Museo Ilocos Norte10. Offer a Prayer at the Laoag Church11. Relax at the Rizal Amusement Park12. Make a Stop at the Batac MuseumHead to the North for a Dose of Excitement! 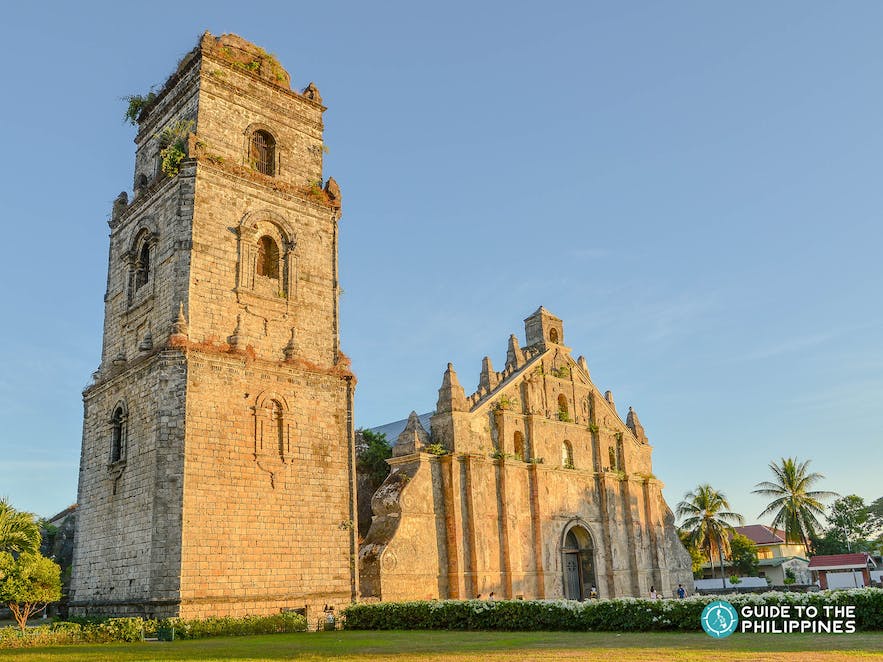 Travel to Ilocos Norte and explore Laoag City. Find out what makes it a unique travel destination by visiting its must-see tourist spots.

Laoag, the jewel of Ilocos Norte, is a city that deserves to be on everyone’s travel bucket list in the Philippines. It offers majestic sand dunes along the Ilocos coastline, awe-inspiring natural rock formations, and centuries-old stone churches. 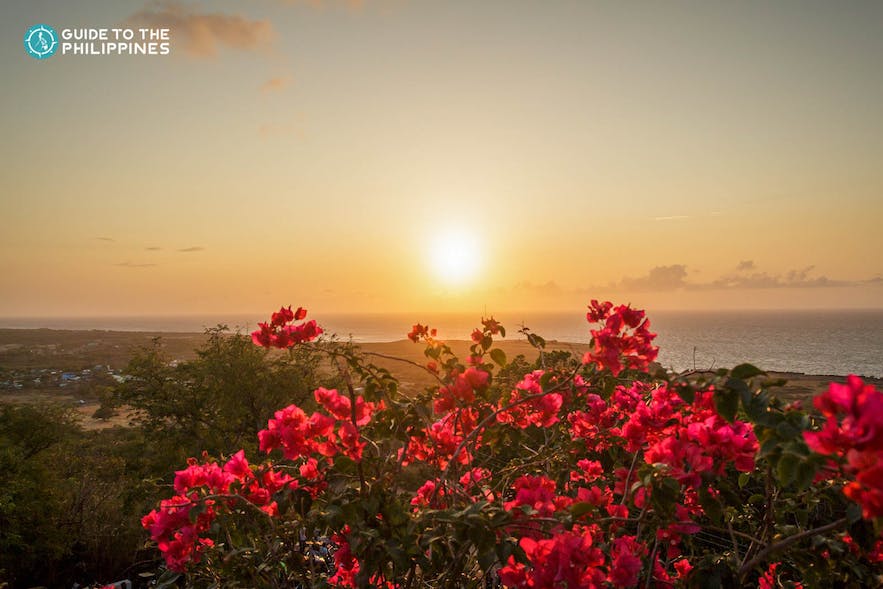 Laoag is also aptly nicknamed “The Sunshine City,” not only because its charms will make even the sourest of moods make a 180-degree turn, but also because the city gets more than the usual amount of clear, sunny days.

If you’re planning to add The Sunshine City to your list of travel destinations this year, here are the top things to do in the city and its neighboring towns that you should include in your itinerary.

1. Marvel at the Majestic Paoay Church 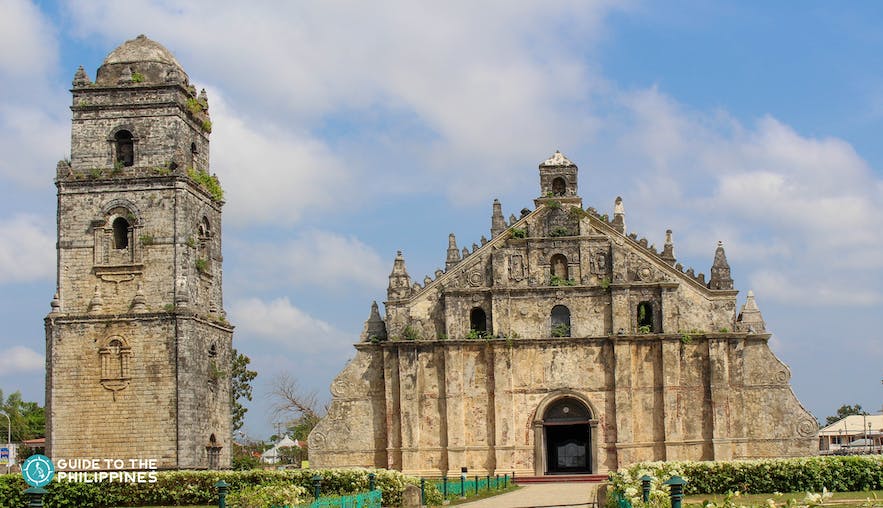 The Paoay Church, a UNESCO World Heritage-listed site, is worth a visit when you go up north. The church, also known as the San Agustin Church, is about 19km southwest of Laoag.

It is built in the usual earthquake baroque style, characterized by its wide base and massive flying buttresses flanking its sides.

Like most old churches in the country, the exterior walls of Paoay Church are made with large coral stones and bricks.

The church’s facade is also reminiscent of Javanese architecture bears a striking similarity to the Borobudur temple in Indonesia.

Construction of the church began in 1704 and was finished 90 years later. Masses are heard in Ilocano, English, and Tagalog.

In addition, Paoay Church’s three-story bell tower, which is detached from the main church, played an important part at certain points in Philippine history.

It served as an observation post for the Katipuneros against the Spaniards in the 1800s, and then again by Filipino guerillas against the Japanese during World War II.

2. Be in Awe by the Bangui Windmills 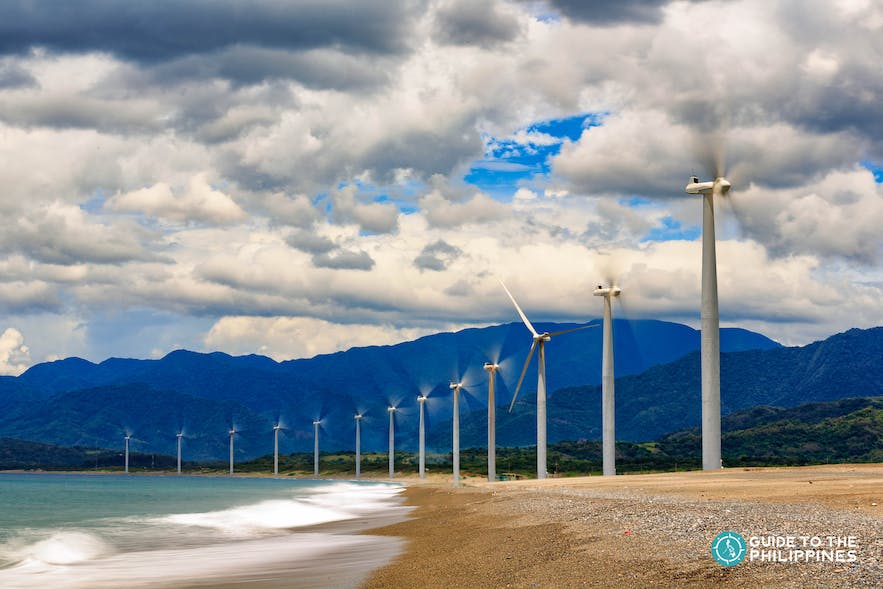 The Bangui Windmills are a long line of 70m-high wind turbines lined up over a 9km stretch of the Bangui Bay shoreline.

Standing tall over the black sand beach, the windmills make up the first wind farm in the country and generate enough electricity to support 40% of the power requirements of Ilocos Norte.

You can clearly see the windmills on the road leading to the bay. There’s little to no signs to tell you where to turn, though, so it’s best to book a day tour in Ilocos so you don’t miss the turn going down the beach.

There is no entrance fee to the Bangui Windmills. There are a few souvenir stalls in the area, so you might want to consider getting a little wooden replica of a wind turbine as a souvenir.

There are also a few establishments dotting the 9km stretch of the wind farm, where you can sit and chill with a bottle of cold beer while looking out into the West Philippine Sea.

3. Go Sandboarding at the La Paz and Paoay Sand Dunes 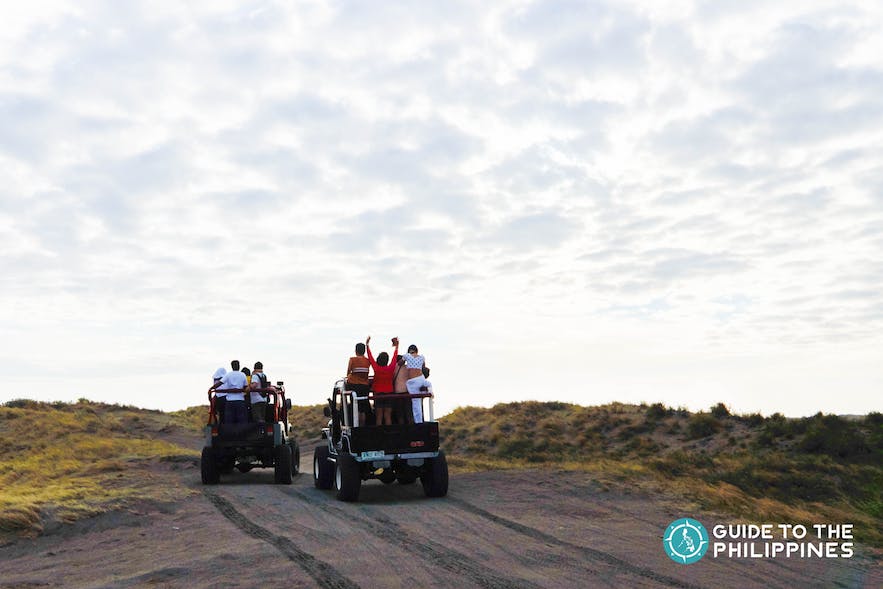 The sand dunes of La Paz and Paoay, the natural coastal desert shaped by sea and wind, are located along the coast near Laoag City.

Its rolling and sometimes steep slopes make it a perfect place for a heart-pumping 4x4 ride and sandboarding.

It’s one of the top ATV tours in the Philippines. The best time to visit the sand dunes is in the afternoon so that you can avoid the worst of the sun's rays and be able to ride your 4x4 into the sunset. 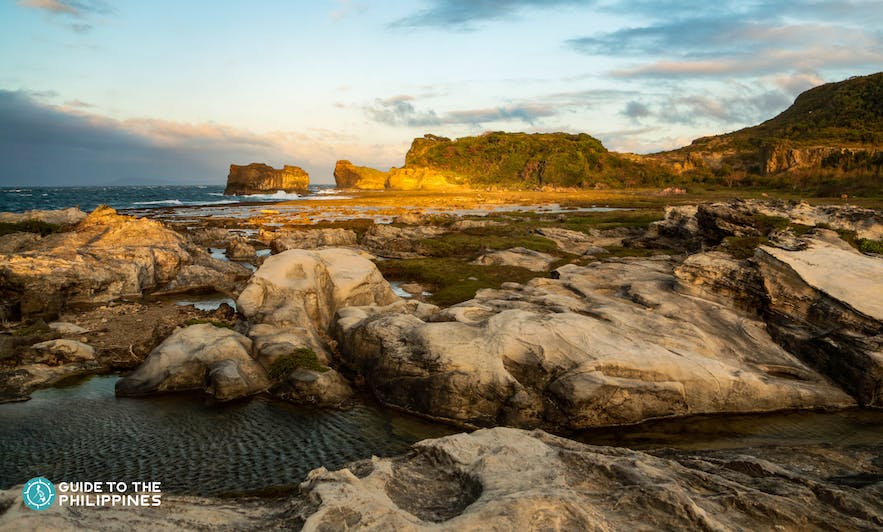 Many tourists go to Laoag for the sand dunes, or to nearby Pagudpud to swim in its beaches. But in the nearby town of Burgos, a hidden gem is waiting to be discovered: the Kapurpurawan Rock Formation.

It is a natural formation that juts out of the rock along the beach. Its name was derived from the Ilocano word “puraw” meaning “white.”

The rock formation is known for its creamy white rock surface sculpted and shaped by the relentless pounding waves.

5. Walk the Halls of Malacañang of the North 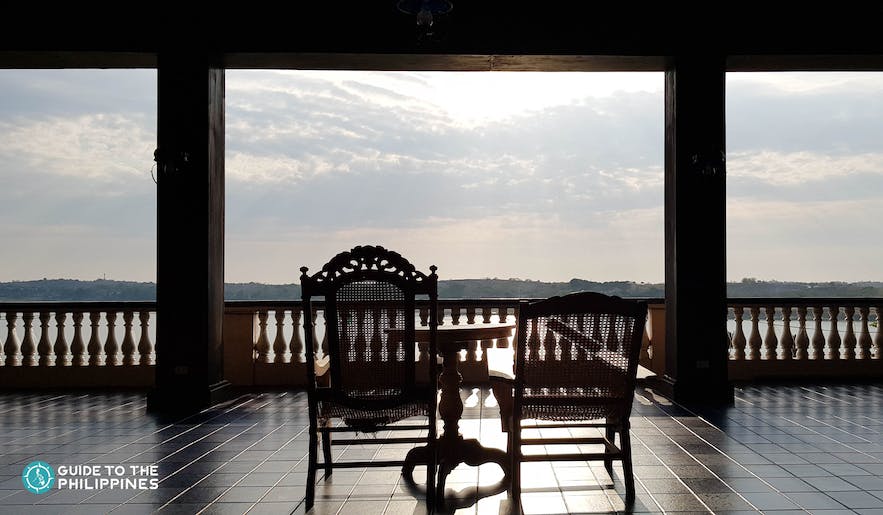 This two-story-mansion-turned-museum was the former holiday residence of the Marcos family. The home is done in Spanish colonial style, with a large spacious living room area, a grand staircase, and wide hallways.

It’s a popular tourist spot included in tour packages such as a day trip in Laoag and Vigan. 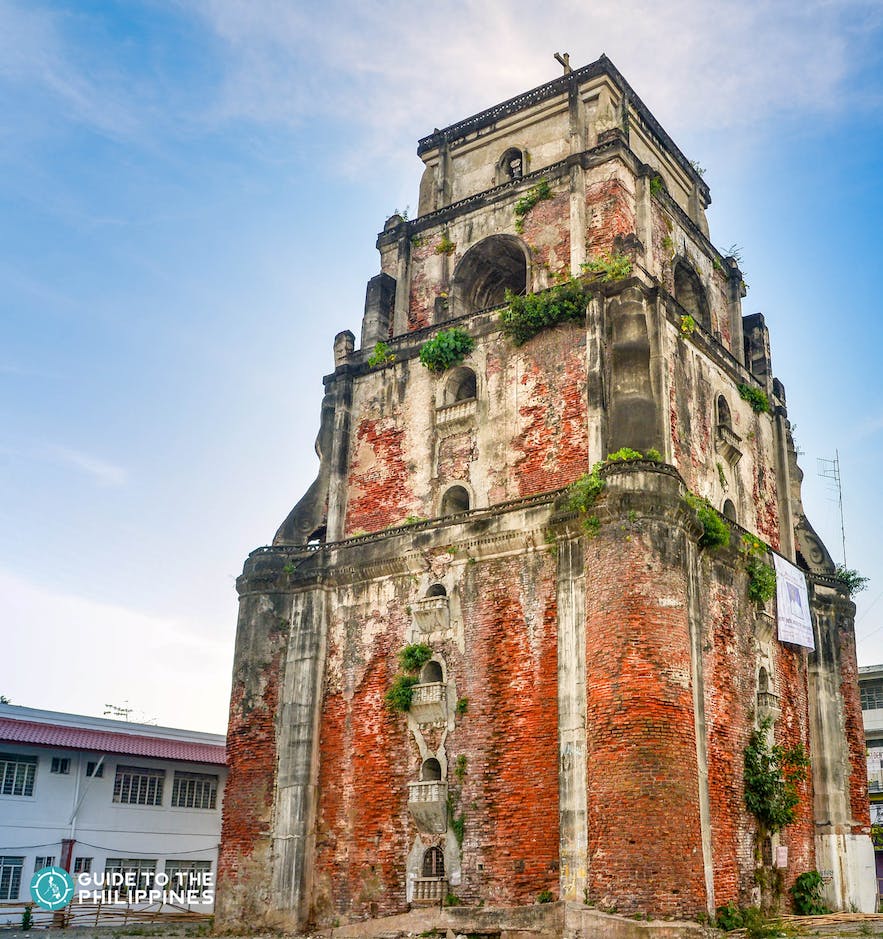 Along a busy road about 85 meters away from the Laoag Church is the Sinking Bell Tower. The bell tower was built in the 1600s by the Augustinian friars, who did not immediately realize that it was on sandy soil.

Since its construction, the bell tower has been sinking at a rate of about 1 inch per year. But despite its slow descent into the underground (literally), the bell tower still rings its bell every Sunday for mass. 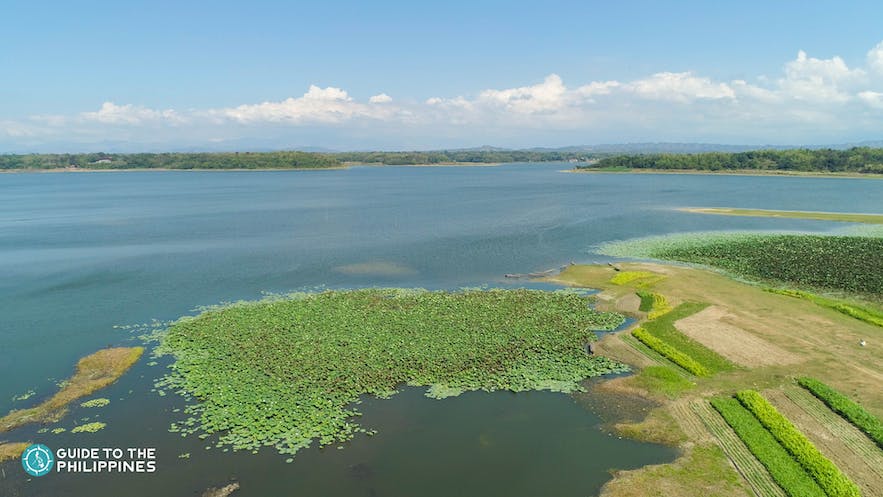 One of the largest natural lakes in the province of Ilocos Norte, Paoay Lake draws visitors not just because it’s right beside the Malacañang of the North, but because of its serene and calm beauty.

The local legend says that the lake used to be the site of a barangay called San Juan de Sahagun, which sank after an earthquake and eventually submerged the village.

Today, Paoay Lake is a feeding stop for migratory birds, and you can go birdwatching near its banks. It’s a tourist attraction often included in

Try to spot the Philippine duck, great egret, great cormorant, and more when you look towards the lake from your vantage point at Malacañang of the North.

8. Taste the Best of Ilocano Cuisine 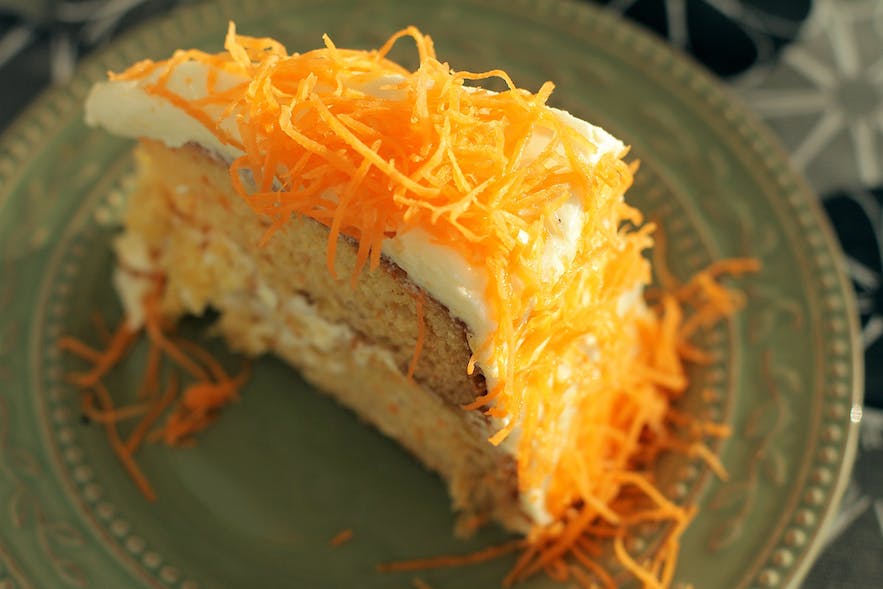 The Ilocos Region is home to a unique and delicious cuisine shaped by Asian and European influences, as well as locally available produce and you can taste the rich and diverse Ilocano cuisine in many of the restaurants in Laoag.

While in Ilocos, you have to try poqui-poqui, a traditional Ilocano vegetable dish made with roasted eggplants, tomatoes, and eggs. Try other dishes too, such as chicken ala pepian aka chicken kare-kare Ilocano style.

Make sure you don’t miss out on La Preciosa’s moist and fluffy carrot cake topped with white icing and sweetened shredded carrots, considered by locals and visitors as one of the best carrot cakes in town.

An old Tabacalera warehouse found a new lease of life as the Museo Ilocos Norte, which showcases the cultural heritage of the Ilocos Region.

It houses a large collection of Ilocano, Igorot, and Itneg traditional clothing and artifacts, as well as exhibits telling the stories of the region’s Spanish-era churches.

If you’re lucky, you might be able to catch special performances and view exhibits from local artists.

10. Offer a Prayer at the Laoag Church

Laoag Church, also known as St. William’s Cathedral, is the current seat of the Roman Catholic Diocese of Ilocos Norte. It was first built out of wood and thatch in the 1500s.

Over the years, the church has evolved to its current Italian Renaissance architecture design. Masses are held in Ilocano, English, and Tagalog. It’s also a part of a day tour in Ilocos.

11. Relax at the Rizal Amusement Park

Despite its name, the Rizal Amusement Park isn’t really an amusement park, at least not in the conventional sense. Instead of circus rides and game booths, this park is instead a huge garden filled with lush greens.

If you’re looking for a place to relax, have an afternoon picnic under the trees, and people-watch, this is the place for you.

Local restaurants and food stalls surround the park, should you want to grab a snack before settling into one of the park benches.

12. Make a Stop at the Batac Museum

The Batac Museum, also known as the Marcos Museum and Mausoleum, is dedicated to the late President Ferdinand Marcos.

Head to the North for a Dose of Excitement! 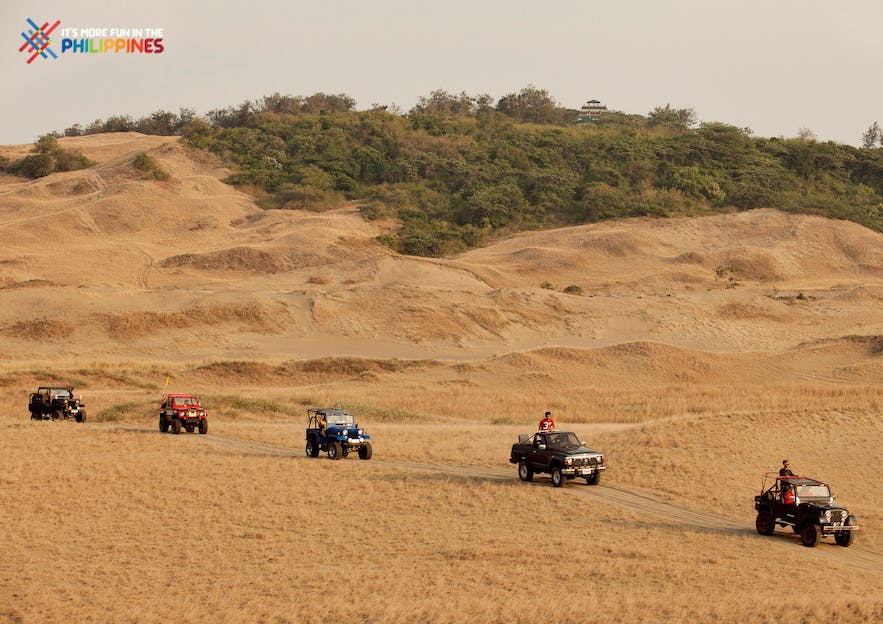 Laoag is a city of contrasts. It is a small, compact city, yet it’s bursting with one lovely attraction after another.

It is the center of business and politics of Ilocos Norte province, yet it boasts of a traditional small-town charm that will lure in visitors escaping the hectic city life.

It is also where wonders of nature exist side-by-side with man-made marvels.

A 3- to 4-day visit to Laoag City will rekindle your love for the simplest of things, satisfy your curiosity for both the old and the new, tickle your taste buds, and ignite your adventurous spirit.

If you’re planning a trip to Laoag City, use this guide to whip up your tour itinerary! You can also check out the different Ilocos tours and activities that can help you make the most out of your holiday in the north’s Sunshine City.