By Kara Santos
Verified Expert
Jump to chapter
IMPORTANT: The destinations featured in this article may have COVID-19 travel restrictions and requirements. Check our COVID-19 travel advisory page for details.

Explore the Northern provinces of Luzon in the Philippines. Find out which destinations should be in your travel bucket list. Learn about the must-see tourist spots and top activities that you shouldn't miss.

The geographical features of the Philippines give the country its famous beaches, but it also means the country is home to several mountains. North Luzon in the Philippines offers some of the country’s most spectacular mountainous areas. Just a few hours away from the busy urban streets of the capital city of Manila lie destinations where visitors can be one with nature.

Trek to world-famous rice terraces and experience the rich tribal customs and culture of the Cordillera people.

Postcard-perfect images of lush terraced rice paddies are the iconic landmarks in North Luzon. Ancestors of the Ifugao tribe carved thousands of step-like terraces in the mountains by hand, creating a picturesque sight that people often refer to as the “Eighth Wonder of the World.”

Blessed with a cooler climate and natural attractions, there is much to discover and appreciate in the mountainous provinces of the North. 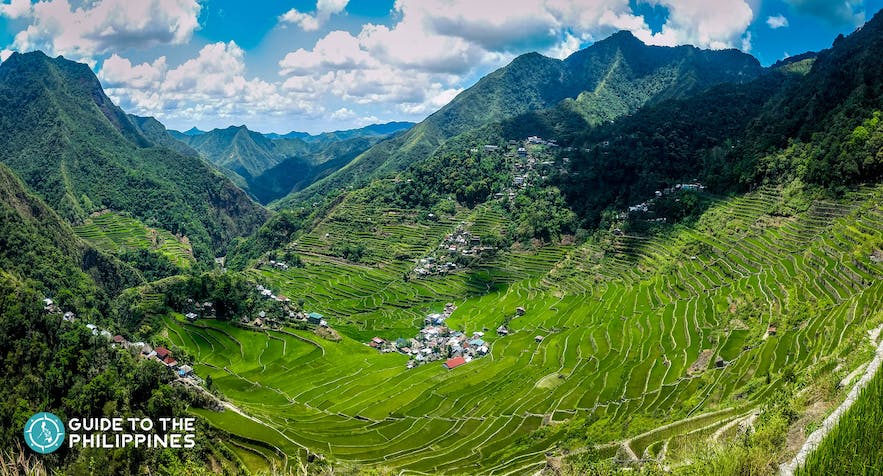 Highlights for first-time visitors include visiting the mountain village of Sagada with its caves and hanging coffins and the stunning rice terraces of Banaue and Batad.

For the more adventurous, you can try hiking in Mount Pulag, the highest mountain in Luzon, which offers a challenging but scenic hiking trail above a sea of clouds.

Experience nature at its best and new cultures when you visit North Luzon. Read on to learn more and plan your trip.

Baguio is a landlocked city in the heart of the province of Benguet. Popularly known as the “Summer Capital of the Philippines,” Baguio City serves as the gateway to the Cordillera region.

Because of its elevation of 1,500 meters above sea level and its pine-clad topography, Baguio City enjoys relatively cooler temperates compared to the metro and nearby provinces. Baguio escapades are popular for both locals and international travelers who want to escape the city heat. 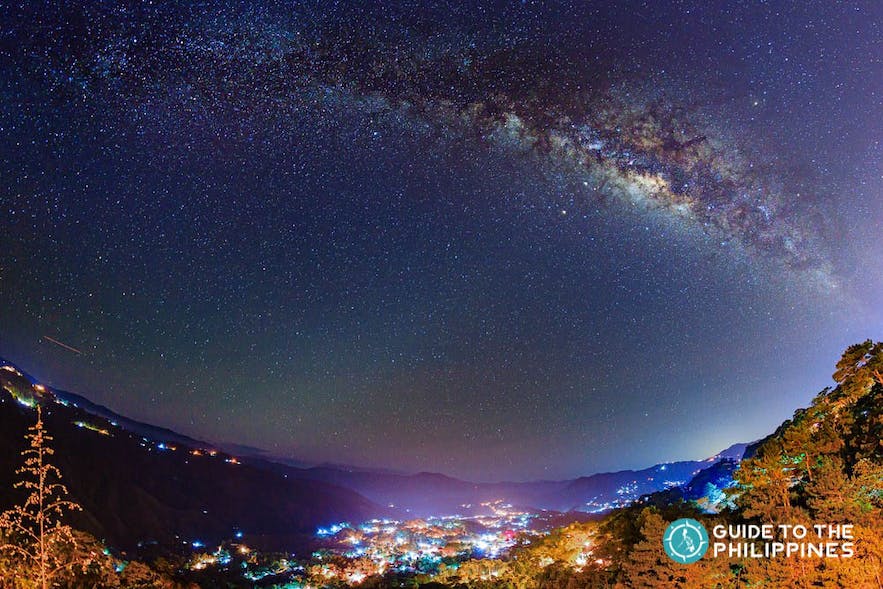 The weather dips to as low as 10 degrees in the cold months of December, January, and February. The dry season lasts from November to April while its the rainy season is for the rest of the year.

Baguio has many hotel and accommodation options to choose from. The best ones are near notable tourist spots in Baguio. Don't miss the chance to visit Burnham Park, Camp John Hay, Mines View Park, Session Road, Night Market, and Botanical Park. 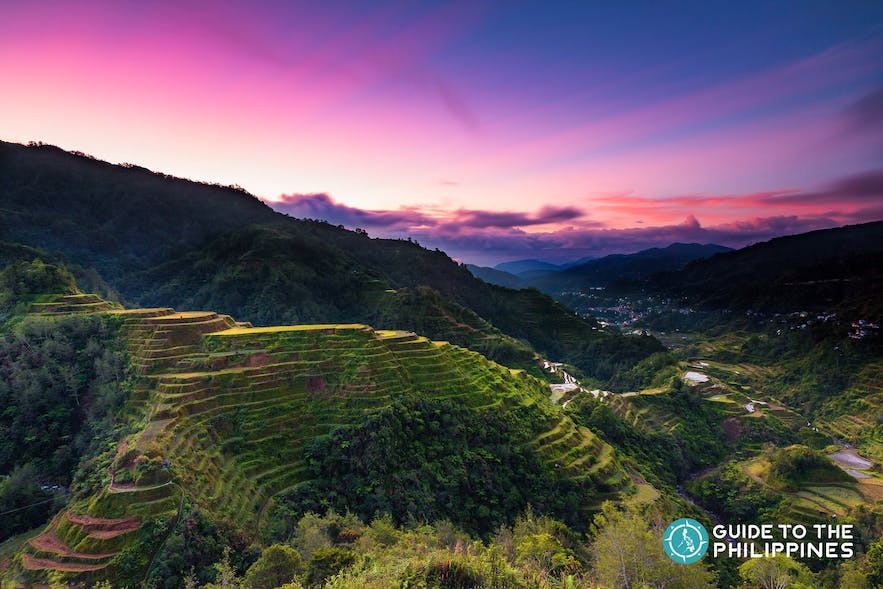 Banaue (also spelled as Banawe) is mainly visited by for its stunning rice terraces. The 2000-year old Banaue Rice Terraces were created by the Ifugao people in a massive engineering project to cover the sides of the valleys.

The Banaue Rice Terraces is one of the most famous tourist spots in Banaue. This amazing landscape designated as a National Cultural Treasure has also made its mark in popular culture.

In the ending scene of the 2018 blockbuster film Avengers: Infinity War, the film’s main villain Thanos is seen walking out of a small hut to watch the sunset on a vista of mountains and rice paddies, which the film production confirms shows the Banaue Rice Terraces. 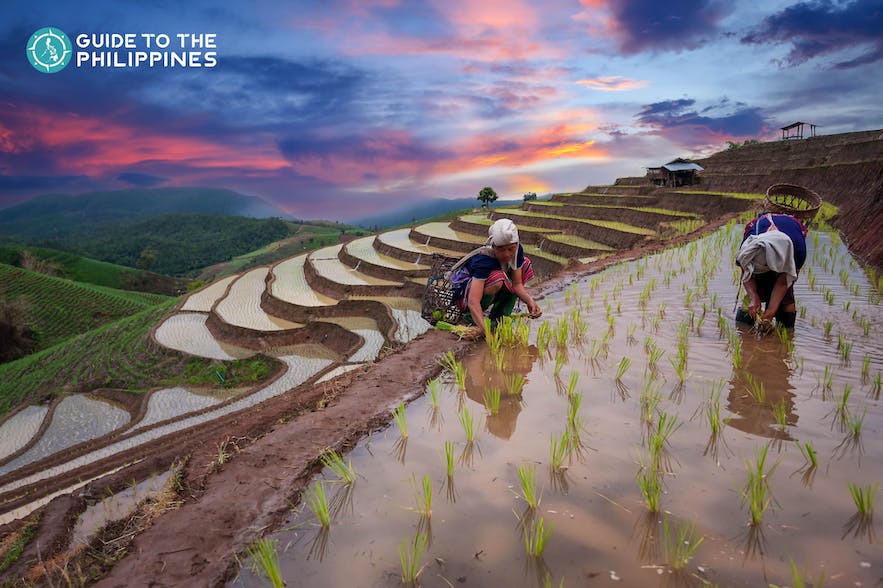 Contrary to popular belief, it’s not the Banaue Rice Terraces which are inscribed as a UNESCO World Heritage Site due to the presence of numerous modern structures.

Rather the Batad Rice Terraces and Bangaan Rice Terraces which can also be found in the province of Ifugao. However, Banaue Rice Terraces is an essential tourist spot included in a Banaue heritage tour. 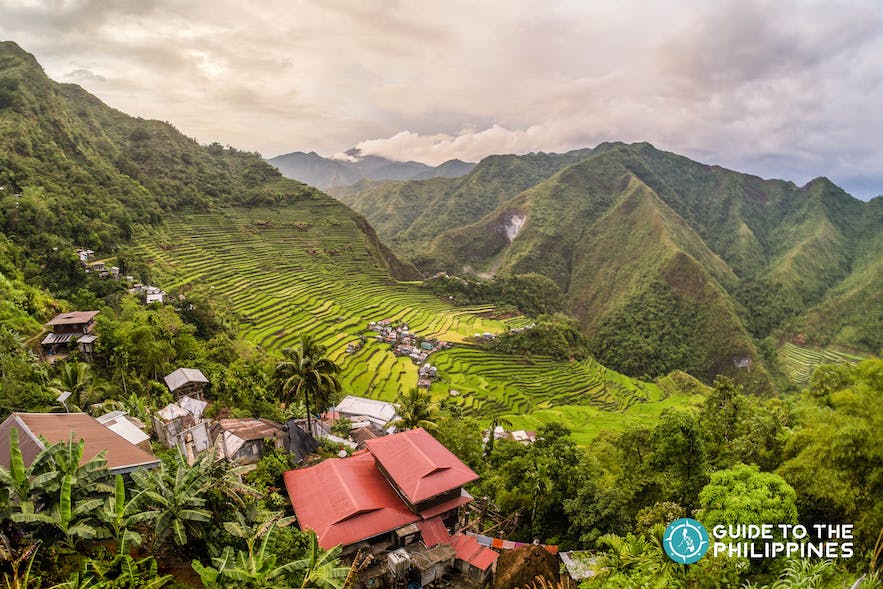 Batad is a quaint village of fewer than 1500 people is situated among the Ifugao rice terraces. It is perhaps the best place to view this UNESCO World Heritage Site. The landscape is truly stunning and the nearby waterfall offers a lush swimming point.

There are no roads leading to Batad and no motorized vehicles in the village. Get ready for a lot of trekking and hiking, because all visitors must get around on foot to visit this remote mountain village. Walking is mostly possible only on the walls of the rice terraces which are wide enough for one person to pass at a time. 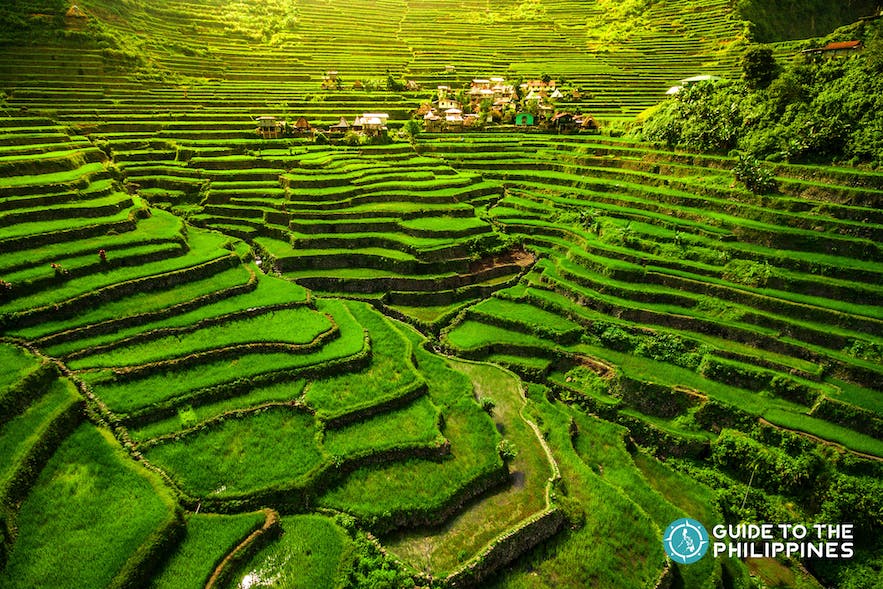 While the rice terraces of Banaue are mud-walled, those found in Batad are stone-walled. The terraces form an amphitheater and are an impressive sight to behold.

Nowadays, visitors can find a number of hostels and guest houses in the small village catering to travelers most of which overlook the scenic rice terraces. For those who have limited time, it’s possible to visit Batad as a day trip from Banaue. 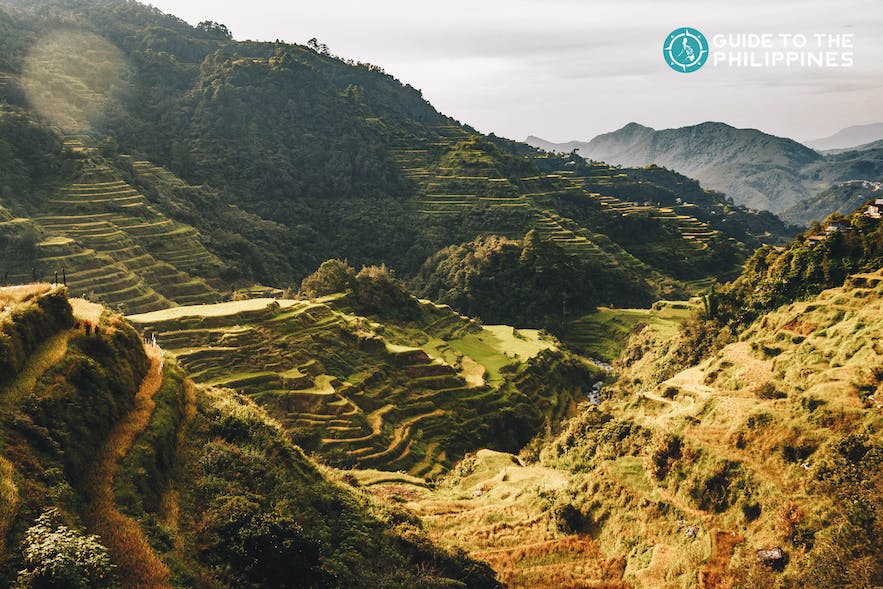 Sagada is a laidback town that is nestled in a valley at the upper end of the Malitep tributary of the Chico River, some one and a half kilometers above sea level in the Central Cordillera Mountains.

The province has long been popular with international backpackers seeking a remote destination off-the-beaten-path because of the variety of tourist spots in Sagada. 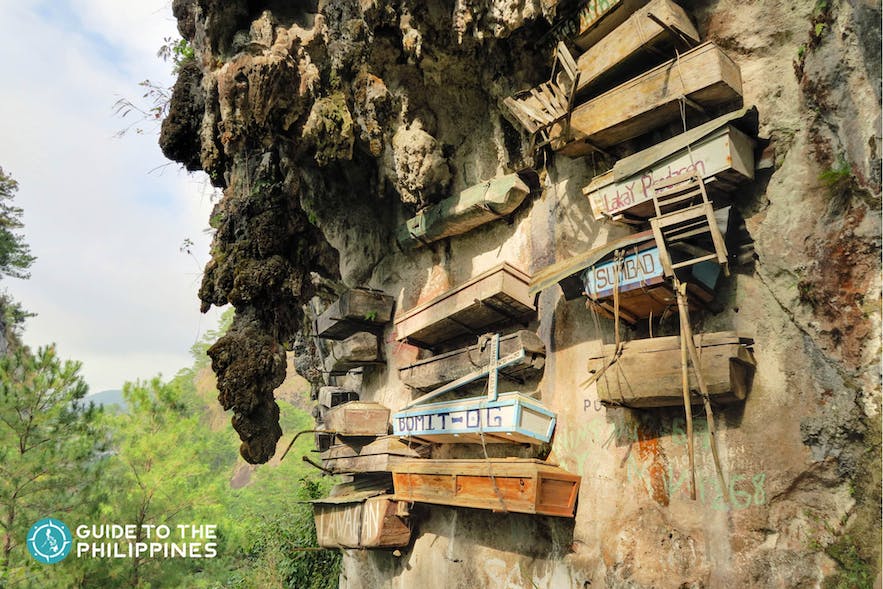 Sagada is also very well known for its hanging coffins. This is a traditional way of burying people that is still utilized today by the local tribes. Not everyone is qualified to be buried this way; among other things, one had to have been married and had grandchildren.

In recent years, the town of Sagada has shot to fame among local weekend warriors because of a popular local romantic comedy filmed there. 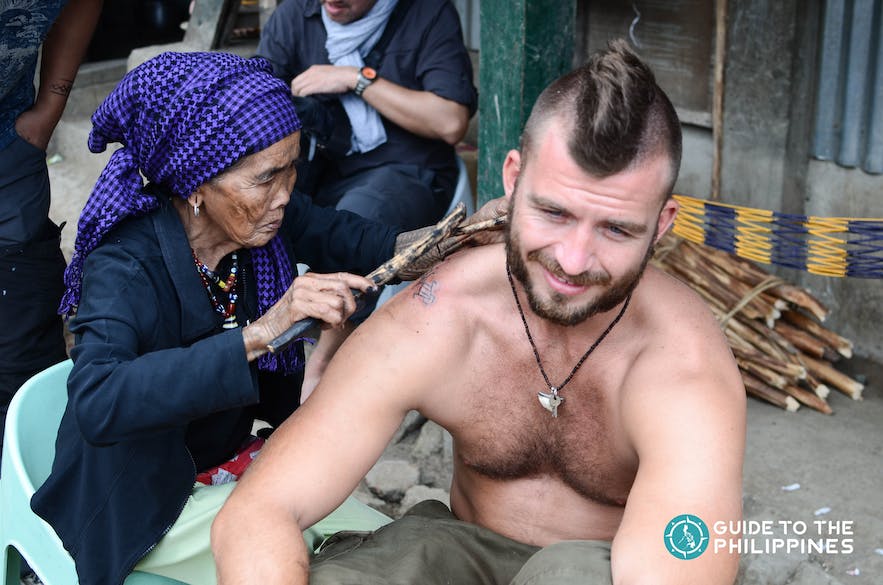 Kalinga is a landlocked province that borders Mountain Province to the south, Abra to the west, Isabela to the east, Cagayan to the northeast, and Apayao to the north.

Once part of a larger province called Kalinga-Apayao, the two split in 1995 for local government to better service respective needs of the various indigenous peoples in the area.

The province is a land of natural charm and beauty with a variety of natural attractions from mountains, caves, rustic villages, and rice terraces. A land of living waters, Kalinga is rich in waterfalls and rivers which snake around villages.

A top draw in Kalinga for modern travelers is the remote village of Buscalan, where adventurous travelers trek to get traditional tribal tattoos by Apo Whang-od, who is known as the oldest mambabatok. She is part of the Butbut people of the larger Kalinga ethnic group.

Some of the more well-known places in Kalinga include Sleeping Beauty in Tinglayan, Kabunyan Natural Dam and Pasil River, the Preserved Tributary Falls and Forest, and Saltan River in Balbalan, the Capitol Provincial Park and Chico River in Tabuk. The Pasil, Saltan and Chico Rivers are the premier whitewater rafting places in the region.

These rivers not only offers rapid-fire excitement but also a glimpse of the cultural history of the Kalinga people. Joining a Kalinga escapade tour will get you to appreciate the province more. 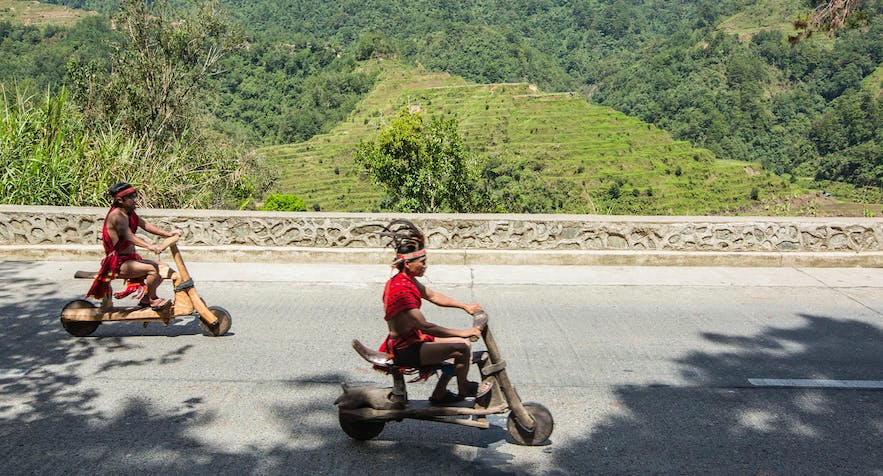 A trip to North Luzon is one of the best adventures you'll ever do in the Philippines. Travel to the mountains of this region to discover the unique culture of Filipinos in this part of the Philippines. If you're coming from Baguio City, research Baguio tours and activities that you can add to your itinerary.