The Hundred Islands National Park of Alaminos City is a protected area in Pangasinan and is included in the list of the top tourist attractions in the province. It is also known as “Kapulo-puloan” or “Taytay-Bakes” with a total of 124 islands spread out along the Lingayen Gulf (123 islands during high tide). Four of these islands have already been developed: Governors Island, Quezon Island, Marcos Island, and Children’s Island.

The islands resemble mushrooms on top of the water. Their physical appearance is a result of the eroding action of the ocean waves. While four of the 124 islands are developed, the rest are left untouched and uninhabited. The islands are spread out on a 1,844-hectare land area. It is believed that they date back to two million years ago and that they are part of the seabed.

This created the Hundred Islands Conservation and Development Authority (HICDA) that aims to manage the HINP. The national park, Lucap Bay and its surrounding areas, was then proclaimed as a Tourist Zone and Marine Reserve under the management of the Philippine Tourism Authority (PTA).

The national park offers a plethora of activities for its guests. The first activity is the usual swimming where visitors can choose from over one hundred islands where they want to swim or stay overnight. Second is island hopping to the four developed islands in the park.

Snorkeling is also available in the place. There are plenty of coral gardens underneath the surface that is teeming with fish and other marine life. The park is also home to the world’s biggest bivalve mollusks of Giant Clams.

Other activities include kayaking or paddling, spelunking, camping, trekking, helmet diving, cliff jumping, banana boat, and wall climbing, among others. 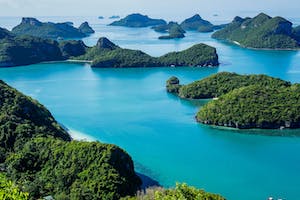