Puerto Princesa is the capital, seat of government, and economic center of Palawan, which is considered the Philippines’ Last Frontier because of its strategic location and ecological bounty. Puerto Princesa holds a lot of natural charm and wonders, from lush tropical forests, mountainous landscapes, down to scenic coastlines and expansive beaches. But its most important gem is the Puerto Princesa Subterranean River National Park, or popularly known as the Underground River, included in the UNESCO World Heritage Site and New7Wonders of Nature lists.

Despite its growing urbanization and modernization, evident with the presence of big malls, hotels, and other infrastructure over the years, Puerto Princesa still has its rustic town atmosphere and laid back lifestyle intact. And while it also serves as the gateway to other wondrous destinations in Palawan such as El Nido, San Vicente, Port Barton, and the Balabac group of islands, good governance has kept environmental and social impacts of tourism to a minimum. It is also considered one of the safest and greenest cities in the entire Philippines.

Puerto Princesa is the second largest city in the Philippines by land area, and while most action happens in the city or town proper, a huge part remains to be well-preserved landscapes and forests – earning its name as the The City in a Forest. Indigenous people in Palawan have also kept their traditional lifestyle alive, despite the increasing modernization and mass tourism in Puerto Princesa and surrounding areas.

Cuyunon is the primary dialect in Puerto Princesa and the rest of Palawan, but both Filipino and English are widely understood and spoken.

Puerto Princesa can be visited anytime of the year. But since most of Puerto Princesa’s attractions are done outdoors — from wandering around its landscapes, hopping from island to island, or visiting its famous Underground River — it is always best to check the weather conditions on when you plan to visit.

Like the rest of the Philippines, Puerto Princesa sees a drop of tourist arrivals — as well as flight tickets and hotel rates — during the rainy months starting from around June until October.

Puerto Princesa enjoys a tropical climate, experiencing both dry (from November until May) and wet (from June to October) seasons. It is an interesting note though that Puerto Princesa, given its location on the extreme west end of the country and being sandwiched between two seas, has a slightly different weather. It may still occasionally rain in November, as well as during the summer months.

The best thing about Puerto Princesa, and the rest of Palawan, is that it is rarely in the direct path of typhoons.

The dry and sunny months from November to May is a high time for Puerto Princesa tourism, peaking at the summer months of March, April, and May. Visitors flock to the destination this time to fully enjoy the outdoor attractions, without disturbances due to heavy rains.

Apart from sunny days, summer months also see high tourist arrivals because of several festivities taking place in Puerto Princesa during this time. Pangalipay sa Baybay is celebrated at the start of the second quarter of the year, kicked off by live band and street dance performances.

Indulge in the freshest seafood in the country when in Palawan, and Puerto Princesa showcases this bounty during its Seafood Festival, held every 3rd week of April.

When to avoid visiting Puerto Princesa

Heavy rains and strong winds usually occur from July until October, so it is recommended to avoid visiting Puerto Princesa at this time since flights and island hopping trips may be cancelled.

How to get to Puerto Princesa

Being the capital and economic center of the entire Palawan region, Puerto Princesa has now become a major tourist destination as well as a gateway to other exciting places such as Coron and El Nido. Its airport and seaports have become busy with many trip schedules going in and out.

The fastest and most convenient way to reach Puerto Princesa is by taking a direct flight from Manila, Cebu, Clark, Iloilo, and Davao. Some of these trips may have a connecting flight, usually having a stop-over in Cebu. Major airlines such as Philippine Airlines, Cebu Pacific Air, and AirAsia all service flights to Puerto Princesa with many schedules throughout the day.

If you prefer sea travel, there is a ferry that goes straight to Puerto Princesa from Manila, serviced by 2Go Travel. However, there are usually only two days per week having this boat trip.

If you’re coming from either Coron or Iloilo, there are also ferry trips that go straight to Puerto Princesa.

Despite the urbanization of its main city, Puerto Princesa as a whole has still remained its laid back atmosphere and rural town vibe. Crime incidents rates here are very low, with no genuine signs of threat for local and international tourists alike. Locals are esteemed to be friendly, warm, and welcoming.

As a general rule when traveling, visitors are expected to be respectful of the locals and their customs, be mindful of their belongings, and to never leave any trash behind.

Palawan is also relatively safe from natural disasters as it has no active volcanoes and fault lines.

Getting around Puerto Princesa

Traffic is not congested in Puerto Princesa, and it is relatively easy to get around with many modes of transportation available. But it is important to consider the places you plan to visit and see whether they are reachable via public transportation or if it is best to rent a van shuttle.

Tricycles or auto-rickshaws are the most visible mode of transport in Puerto Princesa. They do follow certain routes and you may share the ride with other passengers. Alternatively, you may arrange to hire an entire tricycle and have the driver take you on a day tour around the city.

Jeepneys are also available in and out of the city center, with cheaper fares compared to riding a tricycle. It is best to ask locals and the drivers which route they are servicing, and let them know where you need to go to make sure you are riding the correct trip.

Join an organized tour for a more comfortable and hassle-free tour around the city and other nearby attractions.

Because of Palawan’s bountiful waters, seafood here is among the best and freshest in the entire country. Visitors should not miss out on fresh catch served in most of the restaurants and eateries in Puerto Princesa. Apart from this, there are also unique local delicacies that are worth trying when visiting the city. Crocodile meat is somewhat popular here, and is usually cooked sisig-style, a Filipino fare consisting of chopped meat, onions, and peppers seasoned with soy sauce and native lemons. If you are in for an adventure, try the tamilok, a Puerto Princesa delicacy which is actually harvested woodworms dipped in vinegar and eaten raw — if you’re wondering what they taste like, think of oysters.

Tipping is not customary or expected, and bigger establishments would already include a service charge. But tips are still appreciated by local service staff.

Puerto Princesa’s must-try dining establishments are concentrated in the main city or town proper. Most of them serve fresh seafood and Filipino cuisine, with some offering international cuisine to give foreign visitors more familiar options. Kinabuch’s, Kalui, and Badjao Seafood Restaurant are among the most iconic in town.

A heavy party scene is not to be expected in Puerto Princesa. Instead, visitors will experience a fun yet more laid-back nightlife in the city’s tiki bars, street-side grills and eateries, and beer pubs. Most of these are found along Rizal Boulevard.

There has been a nationwide ban for drinking in public, although mostly enforced in bigger cities. But while in Puerto Princesa, it is still best to keep the drinking and smoking inside dining and drinking establishments’ premises.

Stay within the area close to Honda Bay for quick access to island-hopping tours, one of the top things to do while in Puerto Princesa.

Northwest of the city center is where you should be if you want to enjoy most of Puerto Princesa’s natural attractions such as Sabang Falls, Sabang Beach, Hundred Caves, and the Underground River.

There are two major shopping destinations in Puerto Princesa, SM City Puerto Princesa and Robinsons Place Mall Palawan. These are found in the city center near Rizal Avenue.

Aside from natural wonders, Puerto Princesa also has a lot of leisure activities and cultural sights worth checking out. Stay within the city center to conveniently access and enjoy Baker’s Hill, Mitra’s Ranch, Butterfly Garden, Baywalk, and Plaza Cuartel.

How far is the Underground River from Puerto Princesa City?

The Puerto Princesa Subterranean River National Park, or Underground River, is approximately 80 kilometers away from the main town of Puerto Princesa City, roughly an hour and a half away. It may seem a long way but a visit to this UNESCO World Heritage Site is worth it.

How many days do I need in Puerto Princesa City?

This largely depends on the attractions you wish to see and visit in Puerto Princesa. But 3-4 days would be the best duration to stay for a relaxed and leisurely experience. You may also want to plan on a longer vacation when in Palawan, so you can explore other destinations such as El Nido, Port Barton, San Vicente, and Coron.

Are there ATMs in Puerto Princesa City?

Yes, there are many banks and ATMs scattered throughout the city center of Puerto Princesa. It is also best to already get cash while here before going to other island destinations in the province, which may not have ATMs or electronic payment systems at all. 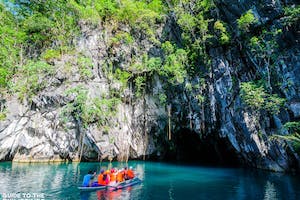