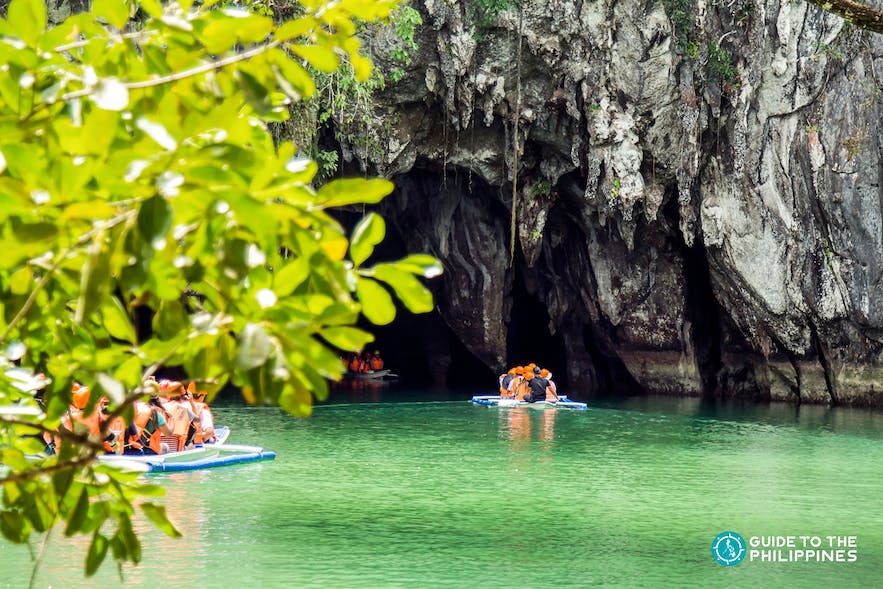 Palawan, the Philippines' westernmost province, is a picture-perfect island like no other. It will transport you to a beautiful tropical paradise that is home to marvelous beaches and abundant biodiversity.

One of the best tourist spots in Puerto Princesa is the world-renowned Puerto Princesa Subterranean River National Park, which holds a place in the New7Wonders of Nature, and has been included in the UNESCO World Heritage Sites list since 1999.

It is is also famously known as the Puerto Princesa Underground River. The 8.2-kilometer-long underground river boasts jaw-dropping cave formations, stunning limestone cliffs, and pristine waters, however, only a portion of the river, around 4.3km, is allowed for tourist explorations. 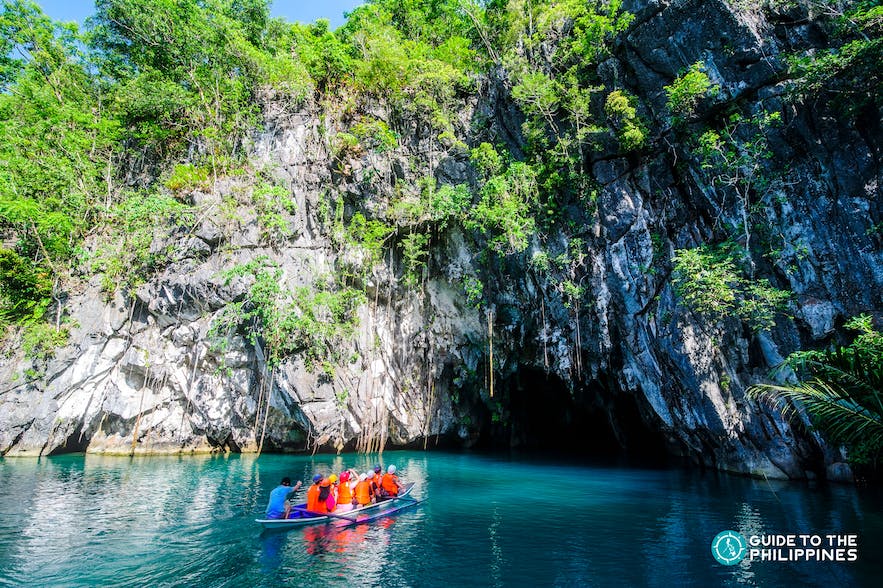 The river's complex ecosystem has adapted to the underground environments over hundreds of years. Visitors can explore this natural wonder by joining a Puerto Princesa Underground River tour.

The variety of species in the caves is endemic to the river system, including fish, crabs, giant spiders, bats, swallows, and snakes. But bats and swallows are usually the only species you'll see.

Pay a visit to this natural treasure to see firsthand why it's a true wonder of the world. Here's a rundown on everything you need to know about one of the best tourist spots in Palawan before your exploration! Let's dive into it! 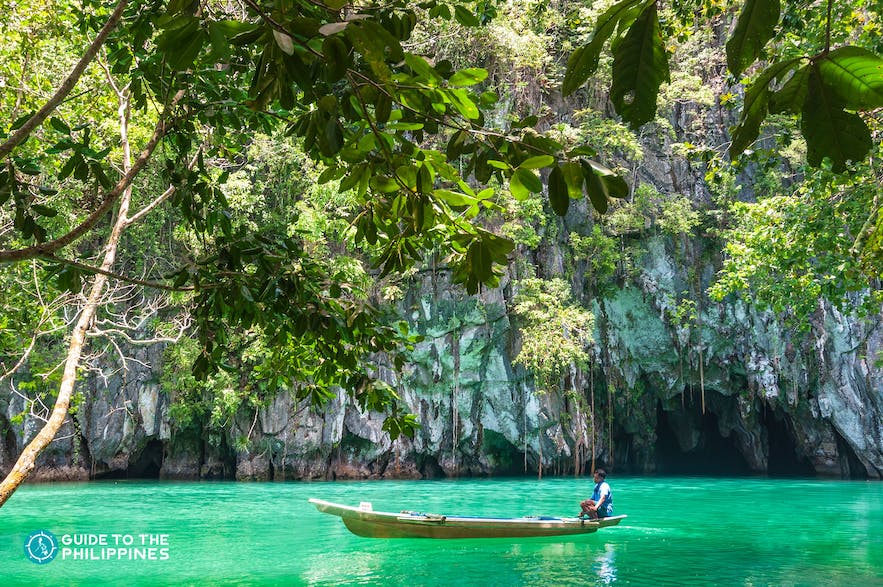 When deciding on a travel date, you should take into consideration the weather in the region. The best time to visit Puerto Princesa is during its dry periods, which is from November to May. The warmest months are from March to May, while its wet season is from June to October.

Make the most of your travel trip to the Underground River during the dry season, as the waves are calmer. There's also less chance that your trip would be canceled or delayed due to bad weather. Be sure to check weather updates from time to time.

How to Go to Puerto Princesa Underground River 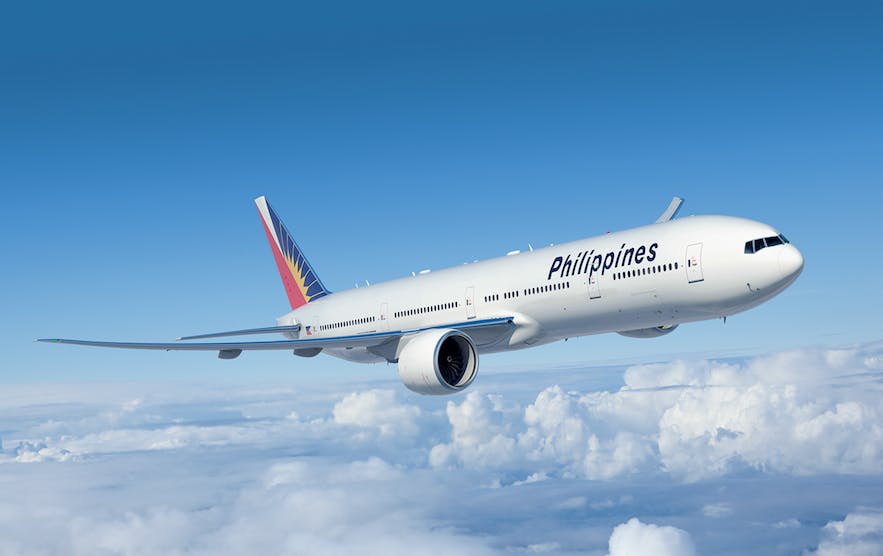 By Jeepney or Bus

From the Puerto Princesa, head to San Jose Terminal, which is located in the San Jose New Market. From the terminal, you'll see jeepneys and non-air conditioned buses en route to Sabang Port.

Their scheduled departure times are 7:00 AM, 9:00 AM, 12:00 NN, and 2:00 PM. They won't leave until all seats are filled. Travel time ranges from around two to three hours, including stopovers.

From Sabang Wharf, you'll board a small boat to get you to Sabang Beach, which is the entry point to the cave.

What to Expect in the Puerto Princesa Underground River Tour 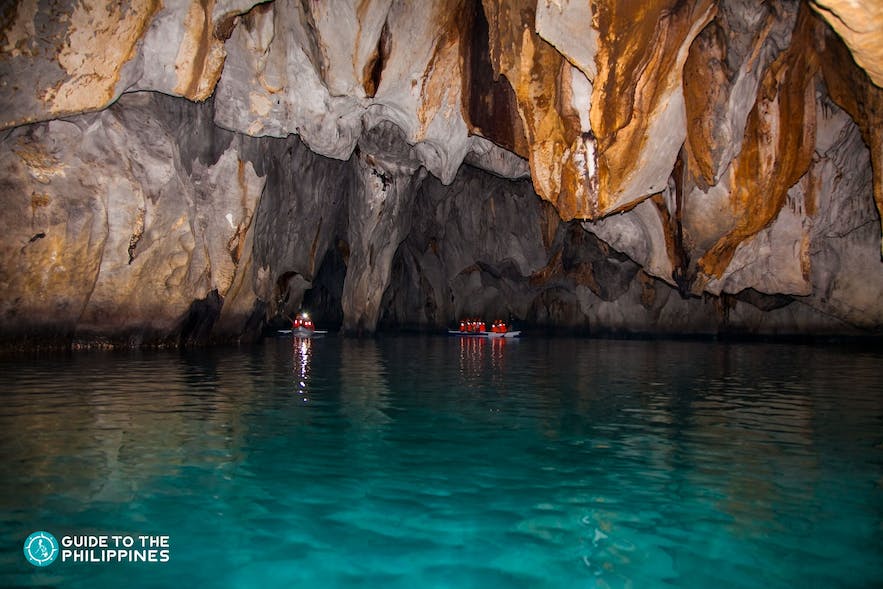 The Puerto Princesa Subterranean River, one of the best eco-tours in the Philippines, is situated roughly 80 kilometers away from the city center of Puerto Princesa.

From Puerto Princesa airport, you'll have to travel to Sabang and hop on a jeep, bus, or van in San Jose Terminal going to Sabang, which can take two to three hours.

Moreover, you can't travel straight to Sabang. You must secure a permit first at the Underground River Booking Office situated at Puerto Princesa's City Coliseum. This is the government's initiative to control the number of tourists that visit the protected area. Prepare your valid ID, settle the fee, and get your permit.

After that, you need to head straight to Sabang Port and go to the Tourism Office. There, you'll present your permit and pay the environmental and boat fees, as well as the mandatory audio guide. A boat will be designated for you and will take you to the Underground River entrance.

You'll then board a smaller boat that will bring you inside the Underground River. Your tour guide or boatman will use a searchlight to show you the cave's stunning stalagmites and stalactites, rock formations, and its inhabitants (i.e., bats, birds, and reptiles).

Underground River tours last around 45 minutes. Once done, a larger boat will bring you back to Sabang Port. You can then either spend the night in town or travel back to the city. 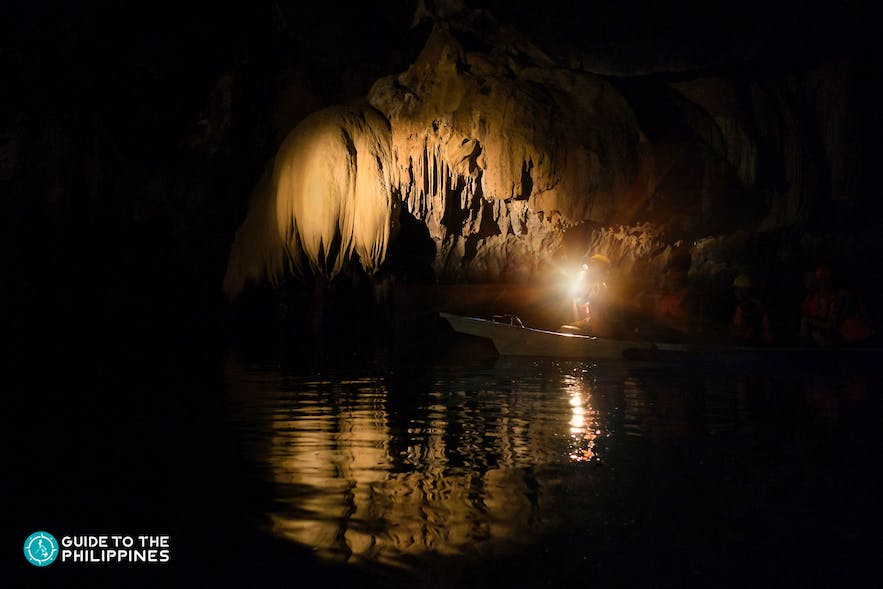 If you're heading to this phenomenal journey in Palawan, take note if these essential travel tips to make the most out of your trip and have a hassle-free adventure:

1. Wear light and comfortable clothes that are okay to get wet and will allow you to move around without trouble. Prepare a change of clothes as well.

3. Bring a dry bag to secure your valuables.

4. Apply sunblock and mosquito repellant before the tour.

5. Always wear the provided life vests and hard hats for your safety.

7. When inside the cave, keep your mouth closed when looking up. You don't want to get any surprise "gifts" in exchange for your bewilderment from above—where the bats are.

8.  It's prohibited to talk loudly inside the cave chambers to avoid disturbing the bats.

Nearby Attractions and Activities 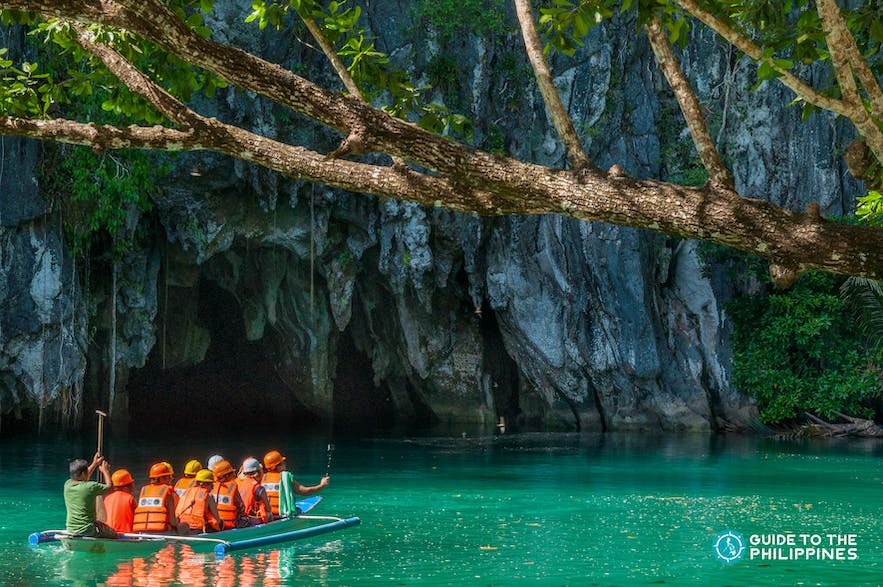 While joining a tour in Underground River is a  unique experience in itself, there are a lot more must-visit spots to see when in Sabang. Here are some of the incredible attractions you shouldn't miss:

There are many tourist spots in Palawan, but what makes Sabang's X-Zipline a worthy stopover is its breathtaking view of the mountains and the open sea. Going to the zipline is an adventure in itself since it's a half-hour trek from the mangroves up the tiny mountain where the zipline starts.

The zipline stands 150 feet above sea level and 800 meters long, so expect to get whizzed through the air as you admire the vista of the river park and the sea. 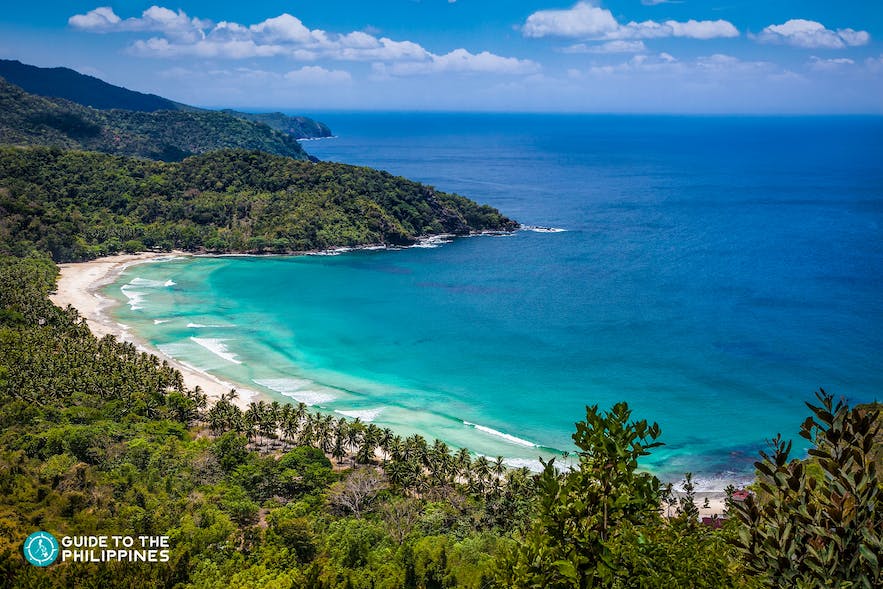 Care for some sun, sand, and a drink in hand? There are a lot of beautiful beaches in the Philippines, particularly in Puerto Princesa. The best part is they’re within reach by land travel from the Underground River.

The eye-catching Sabang Beach is sandwiched between towering mountain ranges and the blue waters. It's known to be a picnic spot for Underground River tourists. You can spend your break time (or more) here, getting a tan with the sound of the waves as your background music.

On the other hand, Nagtabon Beach serves as a good spot for tourists who prefers a more peaceful and relaxing escape. The coast is lined up with palm trees and dons a long stretch of white sand.

One of the best adventure tours in the Philippines that goes well with the underground river tour is Ugong Rock. The term "ugong" refers to the loud sound that echoes when you hit or pound on the walls. This natural attraction stands at 75 feet high.

Extreme adventurers can also try spelunking, which is perfect for those who want a closer look at the formation. This is definitely not for the claustrophobic since you'll be squeezing through narrow caverns, openings, and slip through holes. These adventurous activities also highlight the 360-view of the scenery.

After your underground river tour, you can opt to go back to Sabang by foot over the 5-kilometer trail, otherwise known as the Monkey Trail or Jungle Trail. The off-the-beaten-path has a steep climb that goes through overgrown forest and karst limestones. The limestone cliffs are definitely the highlight of this trek.

As you go through the trail, you will spot wild long-tailed macaques, an Asian monkey. Hence, the name. If you're lucky, you can also spot endemic species of monitor lizards.

While this path will take extended hours than the usual boat ride back to the starting point, it's a lot more exciting, especially for those who are into hiking and adventure-seeking travelers. It's a more substantial and scenic journey.

An Unforgettable Experience Only in the Philippines 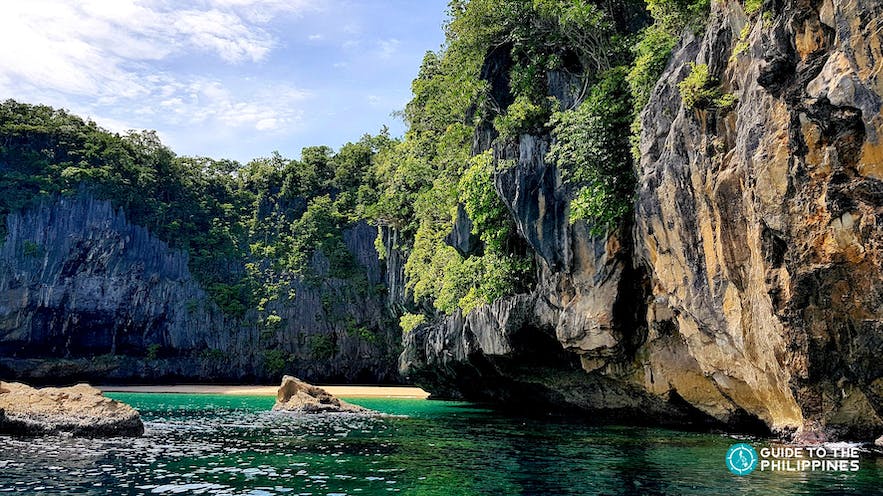 If you have more time to and want to explore other Palawan destinations, you can also check out our guides on El Nido, Coron, or San Vicente.

Bookmark this article as your handy guide when adding Puerto Princesa tours to your itinerary! Find and book your Underground River tour online and have everything you need to be taken care of!