Sohoton Cove and Natural Bridge Park is an 840-hectare protected land that is part of a bigger landscape, the Samar Island Natural Park, which covers 450,000 hectares. The smaller natural park is known for its surrounding forest, exotic wildlife, caves, and its natural limestone bridge that crosses a gorge and the Kayak-an River.

A wildlife adventure at the Natural Park

Established in 1935, there are several fun activities around the park that emphasize the beauty of nature. There is the Sohoton Visitor Center and Eco-lodge, where guests are oriented, and restaurants serving Waray food are available. Cruises are available on Kadak-an River (Kadak-an is Cebuano for golden), named after the brownish color of the river and is Samar’s most scenic waterway. The Panhulugan Cave has cathedral-like caverns and is filled with limestone kart formations, like the stalactite pipe organ that creates music when tapped. The cave also served as a habitat during the Stone Age, burial site of indigenous people, and a hideout during the Spanish-American war. At the heart of the park is the Panhulugan Cliffs, a high limestone wall where Guerilla soldiers used to drop (hulog) boulders to suspicious people passing by the river. Finally, there’s the famed natural limestone bridge, a massive arch over the Kayak-an river.

Getting to Sohoton Cave and Natural Bridge Park

From the Tacloban New Transport Terminal, ride a van or bus to Basey Samar, which will approximately take an hour. A noteworthy souvenir from Basey is the town’s pride Tikog handwoven banigs (weaved mats), bags, and purses, which are all made from the native Tikog reed plants. From there, there are pump boats that will take you directly to Sohoton, or you can ride a habal-habal to Wespal, Barangay Girang, and then ride a pump boat. Just make sure to visit the Natural Bridge Park during the summer, as they are closed during rainy season (December-February) because of flash floods. 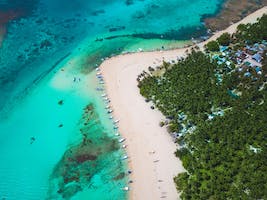