Guide to Diving in Malapascua: Swim with Thresher Sharks

By Wowie Wong
Verified Expert
Jump to chapter
IMPORTANT: The destinations featured in this article may have COVID-19 travel restrictions and requirements. Check our Malapascua Island travel guide for the travel requirements.

Dive with pelagic Malapascua Island thresher sharks in Cebu. Find out how to get to Monad Shoal to swim with them and learn the local community rules on scuba diving practices in the area in this article.

The island of Malapascua, one of the best diving sites in the Philippines and top Visayas tourist spots, sits 6km off the north of Cebu Island. Malapascua is synonymous with pelagic thresher shark diving Cebu tours since it's known to be where you have the chance to meet them all year round, on almost a guaranteed basis.

Cebu's Malapascua got its name from Spaniards who landed on it back in the 16th century during a stormy Easter Sunday. To describe their mishap, they called the island Mala-Pascua which meant bad Easter. Back then, its residents primarily lived on fishing which were mostly sold to Cebu.

Thresher sharks are typically deep-sea sharks and are known to spend most of their time down there. Take note, however, that only in Malapascua do they go shallow enough within recreational diving depths for almost everyone to see.

When diving in Malapascua, It would be most advantageous if you’re an experienced Advanced Scuba diver with Nitrox certification.

If you're planning scuba diving holidays for beginners or scuba diving tours for certified divers to Malapascua to swim with thresher sharks, bookmark this guide to help you plan your trip to one of the best tourist spots in the Philippines.

How to Get to Malapascua

The easiest way is to book transfers from Cebu going to Malapascua or book Malapascua tours that include airport pick-up and drop-off. 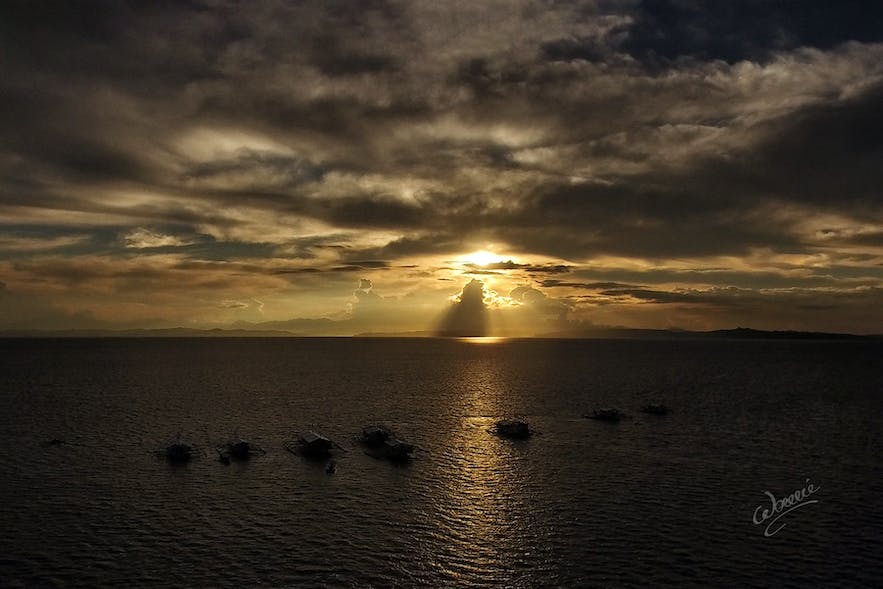 Off the south-eastern side of Malapascua Island is a sunken plateau called Monad Shoal where there is an abundance of cleaner wrasse fishes, from whom these sharks get free cleaning services every morning, to remove parasites and dead tissues from their bodies.

This is one of the biggest reasons why it is believed these sharks are here. This phenomenon was discovered by European divers, Dik de Boer and Michael Persson, during their dive expedition back in the mid-1990s.

Observing the way the dive centers run their routine in Malapascua, it is customary to be at Monad Shoal by break of dawn, which is believed to be the best time to see the sharks, when they rise from the deep. Thus, it’s quite usual to see scuba divers at 4:30 AM by Malapascua’s beach waiting to be picked up by their respective boats.

So, if you’re expecting to dive with the thresher sharks in Malapascua, make sure you make your way there on the previous day and remember to sleep early.

While you’re on your way to Monad Shoal, feast your eyes on the changing colors of the sky as the sun rises from the horizon. You will also notice other boats coming from different directions as if it were a race to the best buoys around Monad Shoal, but, it also is a race among the best front row seats underwater.

Depending on the season, there could be as many as 40 boats or more in Monad Shoal. In that regard, make sure you know your boat and your dive operator’s names in case you get separated from your dive guide and group upon surfacing. 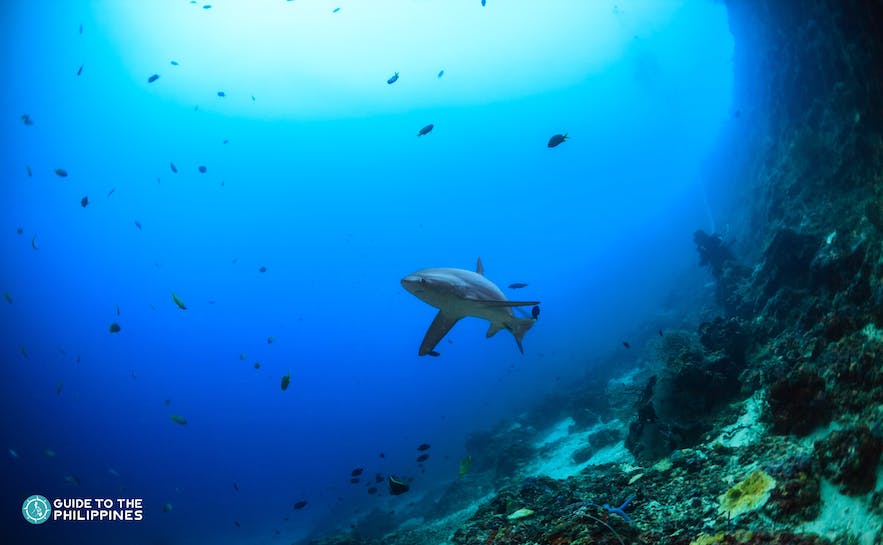 Now, let me share with you some important things you have to think about on this special dive:

No Strobes and Video Lights

The use of strobes and video lights for either photography or videography are not allowed. While it has not been proven that lights may harm the sharks' eyes, lights could possibly scare them away.

The longer you stay underwater, the better your chances you'll see them, thus, I would highly encourage you to use nitrox, if you are Nitrox certified.

Around the cleaning stations underwater, where the clusters of cleaning wrasses are concentrated, are pre-installed ropes that indicate boundaries. There are identified cleaning stations in varying depths at 18, 23, and 25 meters.

You are highly encouraged to kneel, hover low, or do a fin pivot outside of these boundaries. Each dive guide from every boat will be watching all of the guests underwater to make sure these rules are abided.

If you happen to be at the very front of any boundary, please be sensitive not to hover at all because you may be blocking the view of other divers behind you.  Dive guides from each dive operator around are always on the lookout for violators.

Most of the time, you will be positioned around the edges of the sunken plateau, where these cleaning stations are, looking out into the blue. The default itinerary is to go down deep to about 25 meters working your way up to the shallower cleaning stations. 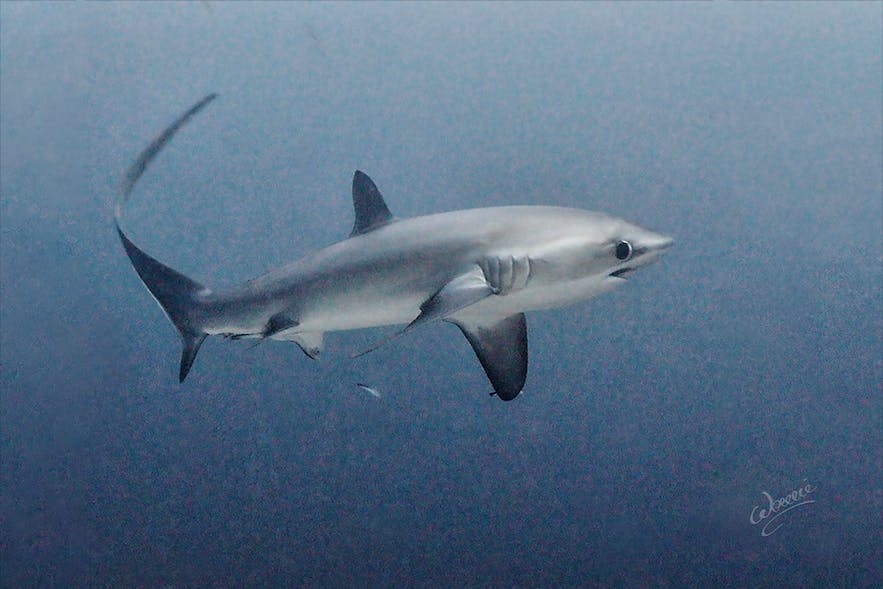 The thresher sharks generally move slowly within this area to give time among the small cleaner wrasses to clean them while they pass by, which also means that you'll have a lot of air time with them.

Other than the pelagic thresher celebrity sharks are sightings of white tip and grey reef sharks including pelagic mantas and devil rays, which are believed to be taking advantage of the wrasse cleaning stations as well. 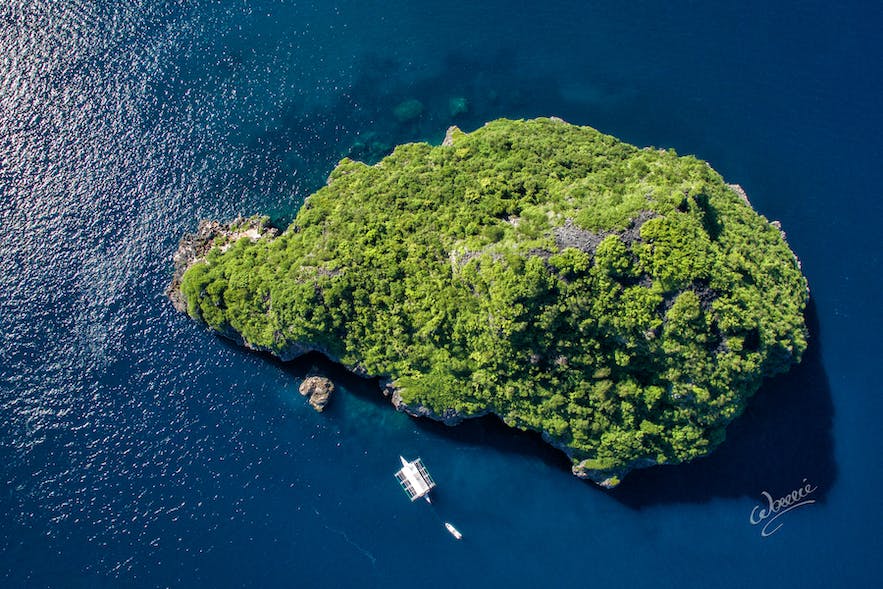 After a great dive at Monad Shoal comes another exciting dive around the depths of an island called Gato, a sea snake, and fish sanctuary. It sits off the north-western part of Malapascua Island.

It features a huge cave on the south-western side of the island around 12 meters deep with a length of approximately 20 to 25 meters. A torch is highly recommended on this dive because there is a short section in the middle where you wouldn't see external light.

If there is a current going through it, you may expect white tip sharks accompanying you out by its exit. Around the island will be sea kraits, sea horses, nudibranchs, cuttlefish, mantis shrimps, frog fish, crabs, squids, cardinal fish, and rock formations where different soft corals had healthily grown. 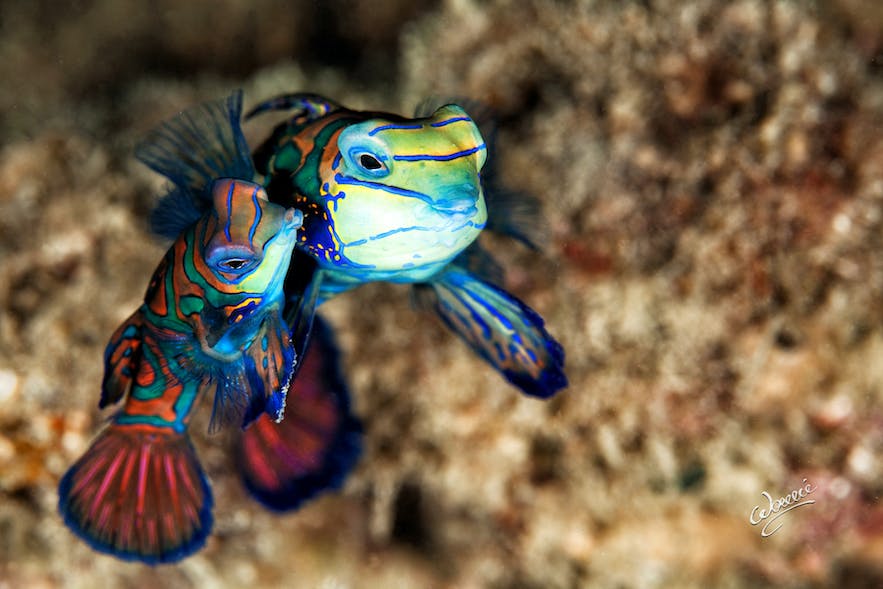 Just off the shore of Malapascua's lighthouse on the west is called the Lighthouse dive site. One of the popular Malapascua dive sites, it bears seahorses, blue ring octopi, and other small critters for macro photography, but it is most famous for a colony of mandarin fish found in a wide area of staghorn corals.

The mandarin fish is a member of the dragonet family and is known for its vivid colors that mimic the robes of an Imperial Chinese mandarin. I would highly recommend that you get in the water 30 minutes before sundown because the mandarin fish would start their mating ceremonies exactly at the time when the sun hides from the horizon.

As you go along looking around the staghorn corals, try to find a good spot where you can find a good concentration of them. You will get more chances of seeing them courting each other until they mate. A pair would attach to each other by their pelvic fin and swim vertically upwards.

As soon as they hit half a meter high together, you will witness a cloud of eggs and sperm, as they immediately detach away from each other and hide back among the array of staghorn corals.  Such courtship and mating happen multiple times within an hour from sundown.

A torch is highly recommended on this dive too because you will definitely be surfacing right after sunset. Another important tip: Don’t shine your torch directly among the mandarin fish, especially while they are on their courting stage. Their mating process usually stops when bothered by light.

Other Must-Visit Places in Malapascua

There are other points of interest within the vicinity of Malapascua.  There are islands such as the Chocolate, Kalanggaman, and Capitancillo that you may visit.

Right in between Malapascua and Cebu Islands is the Chocolate Island.  It is approximately 30 minutes away from Malapascua and is an underwater haven for macro photographers. It features a shallow dive for various nudibranchs, flatworms, shrimps, frogfish, cuttlefish, sea snakes, eels, batfish, blue ring octopi, ghost pipefish, and more. 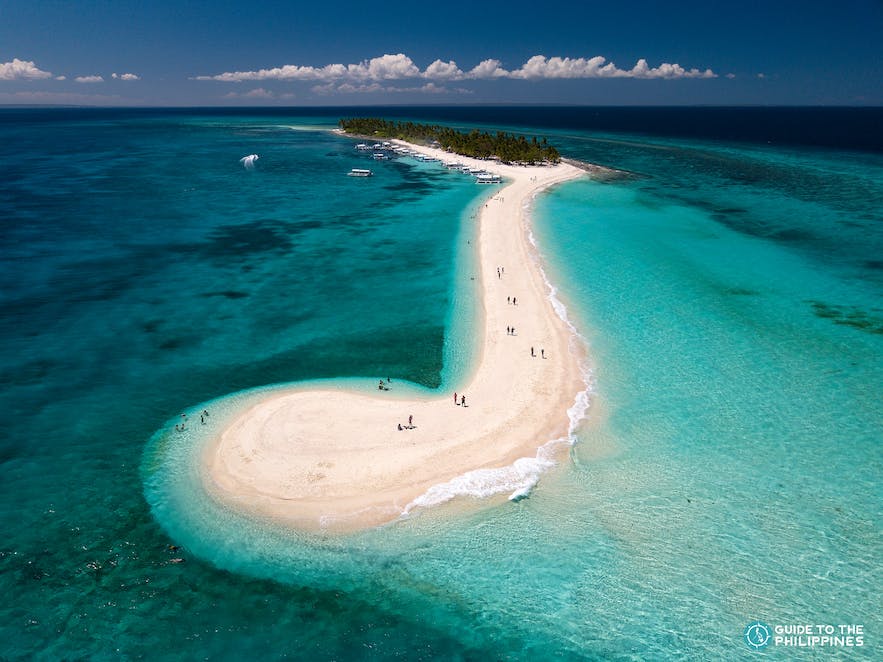 Off the east of Cebu Island’s northern tip is the Kalanggaman Island. It bears a beautiful beach with white powdery sand that you can also visit in Leyte tours. Local tourism only allows 500 visitors a day and to promote safety, local police is also present on the island.

Its unique feature is its long and majestic white sand bar that looks like a long white carpet laid down for you that leads to paradise. Run all the way to its end and feel the thought of being detached and free from our busy civilization. 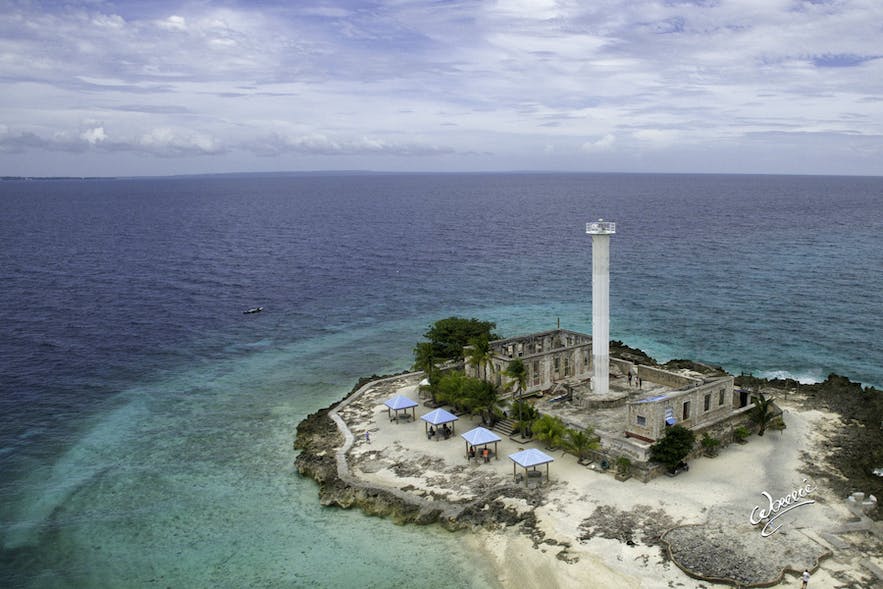 Capitancillo, on the other hand, is a small coral island and a marine protected sanctuary. Legend says that the island was once a ship from Spain whose captain, named Capitan Basilio insulted a local chieftain, Datu Bugtopasan. Datu Bugtopasan then cast a spell on the captain’s galleon turning it into a rock.

A lighthouse was built on it back in 1905 and it still stands there today. While the lighthouse is still operational, the building structures around it have been falling into gentle ruins. Its wall stretches all the way down to 55 meters and proudly displays huge gorgonian fans, colorful soft and hard corals, inhabited by schools of fusiliers.

There are yellowfin tunas, school of jacks, mackerels, groupers, and snappers.  Senior divers mentioned that the location used to have resident sharks and rays.  With its recent addition to the marine sanctuary list, we hope to see them back in the near future. 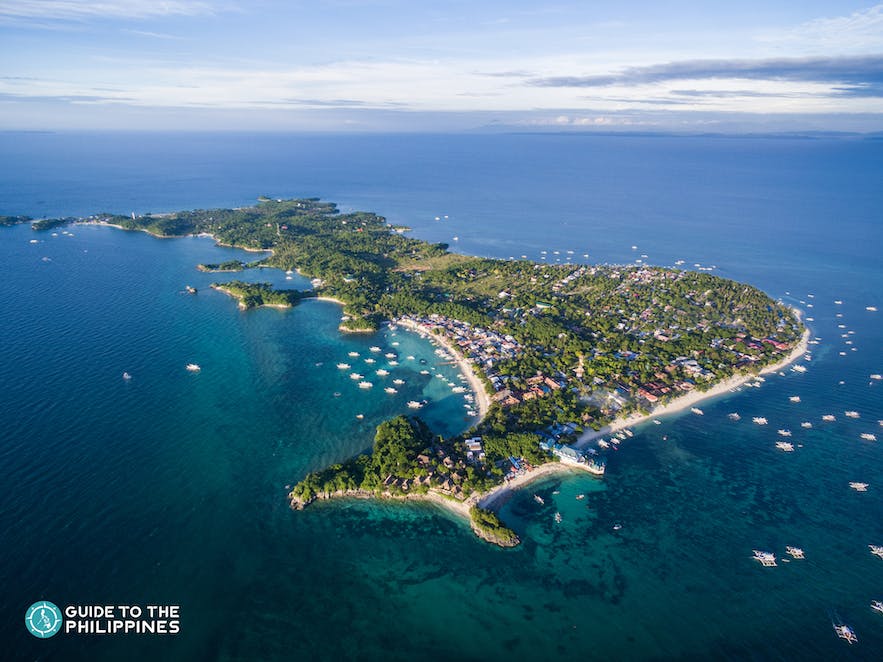