Puerto Galera is a village located in the northern tip of Mindoro, the Philippines' 7th largest island. It's known for its white sandy beaches, pristine blue water and island scene, and nightlife. Besides being a relaxing beach vacation, Puerto Galera offers incredibly diverse diving in the Philippines and in the heart of the Coral Triangle.

Just across the Isla Verde passage from Anilao, Batangas, independently famous for macro diving and nudibranchs, Puerto Galera offers over 40 dive sites along its coast, with healthy coral reefs and an abundance of fish.

Many divers attribute strong current to the area and think of it as advanced diving in terms of dive skills, but that is only partially true; stronger currents depend on the lunar calendar and in certain dive sites, occur two weeks of each month, with especially crazy drift dives 4 days after the new moon.

In April 1570, the Spaniards left Bombon (now known as Batangas), sailing through Isla Verde passage, right onto this white sandy beach, believed to be discovered by Chinese traders named Puerto Galera (the port of Galleons).

Puerto Galera was a small fishermen village until it was discovered as a tourist destination due to its pristine blue water and green hills of its topography. It became a popular tourist spot in the late ’70s, and in the late 80’s it became known as a diverse dive destination with colorful reefs,  and since then, became one of the Philippines' premier dive spots.

Puerto Galera has the optimal condition for certifications; learn to dive or fun dive tours while experiencing the marine diversity of the coral triangle. 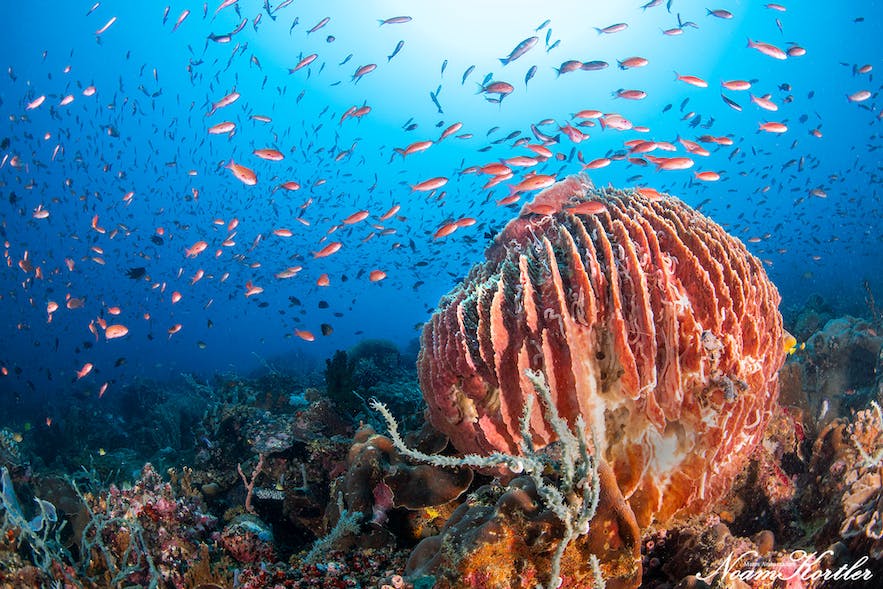 The Coral Triangle is the habitat for 76% of known coral species globally, 52% of Indo-Pacific reef fishes, and 37% of the world's reef fishes. Diving here offers the highest diversity of coral reef fishes in the world- more than 3,000 species, and you can also find here 6 out of the 7 species of marine turtles!

If you're diving a macro site, bring a magnifying glass. Many little critters come to life once divers get a chance to have a closer, bigger look. Especially in sites with no current, focus on a single critter and examine color patterns, distinguishing factors, and more.

A camera with a macro lense can offer the same results, but in lack of sophisticated electronic equipment, buy a regular, handled magnifying glass and get a small hole through it with a gentle drill. Jewelers and hardware stores would likely have such tools. Pass a cord through it and clip it to your BCD. 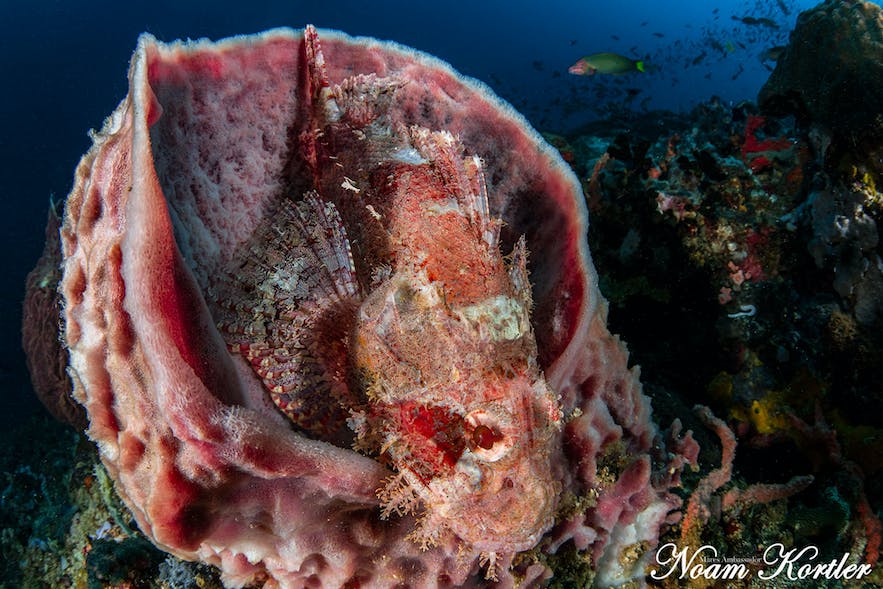 A couple of dive sites worth visiting include Giant Clams, a protected area in Puerto Galera bay with clams hundreds of years old which can be 1.5 meters wide. Sloping down into the sandy grass bottom, this is a popular site for spotting hairy frogfish, mimic octopus, wonderpus and flamboyant cuttlefish. Less known dive sites with excellent macro include Montani and Shipyard.

Coral Cove is an excellent macro site, with a sloping reef filled with Nudibranchs, Ribbon Eels, Pipefish, Frogfish, Seahorses, and Orangutan crabs. Sinandigan Wall is a 30-meter deep wall with a blanket of Nudibranchs on its sandy, bouldered bottom.

This is a great place to spot Leaffish, Frog Fish, Crocodile Fish, various anemones, and plenty of small shrimp residing in the mushroom corals. 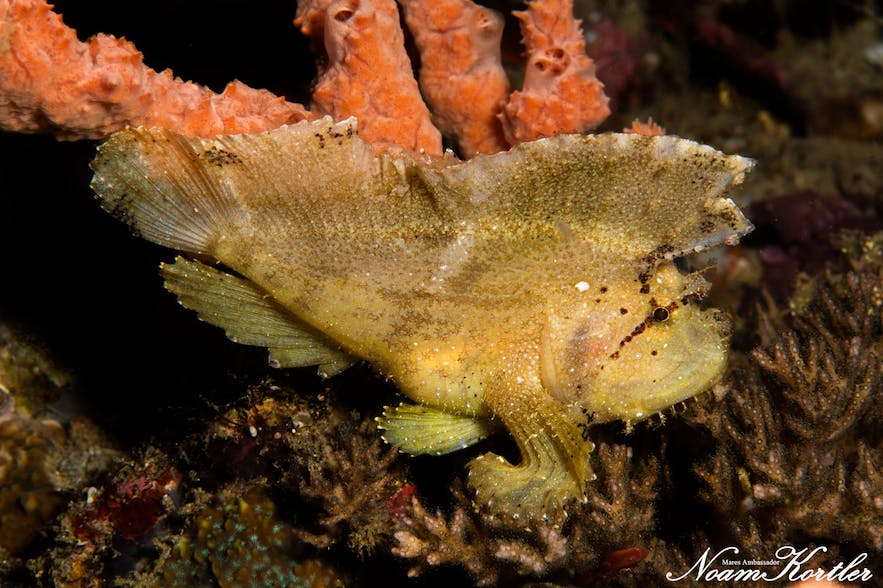 Divers can get a glimpse into wreck diving experience in Puerto Galera’s one proper wreck and a few smaller wrecks. The instructor can teach wreck specialty here, and true rust fanatics can continue from Puerto Galera to Coron Island, the wreck mecca of the Philippines.

Alma Jane is a 60 ton, 32-meter steel-hulled Filipino cargo vessel built in 1966 in Japan. She was stripped of dangerous objects and intentionally sunk in 2003. She sits upright on the sandy bottom, well within recreational limits, at 20-30 meters deep, with its upper deck at 22 meters deep.

She decayed rapidly and looks older than her 14 years underwater, mostly due to the warm water of the area (about 30C during summertime).

On the upper deck, divers can get an of Alma Jane original timber deck lines, which are now rotten. The upper deck is bountiful of hard and soft corals, shrimps, crabs, and macro life. Swimming through with its wide beams, schools of fish swim along, while light rays entering from various skylights create beautiful scenery. Moray Eels reside in the metal structure, while the mast on its bow now houses oyster clams and hard corals.

Diving on the sandy bottom offers an excellent view of the ship’s silhouette. You can expect to meet Snappers, Sweetlips, Batfish, Rabbitfish, Scorpionfish, Pufferfish, Lionfish, Trumpetfish, Frogfish, Octopus, and Cuttlefish.

Dive Tip: Bring a torch and a good dive guide to point out everything.

Also knows as Anton's Wreck, this 18-meter long wooden boat was sunk by local dive operators in 1995 to create an artificial reef. At 20-24 meters deep, swim alongside large Snappers while spotting juvenile and adult Frogfish and Sergeant Major (a type of Damselfish) guarding their purple eggs.

Diving St Christopher at night, the sandy bottom crawls with dozens of crabs and shrimps, on the wreck itself or in the soft sponges around it. Snappers, Batfish, and Frogfish are regulars on this dive site.

St. Christopher can have moderate to strong current during tidal changes; it's best to dive it at slack tide and use is as a starting point to explore the reef in Small Laguna Beach. 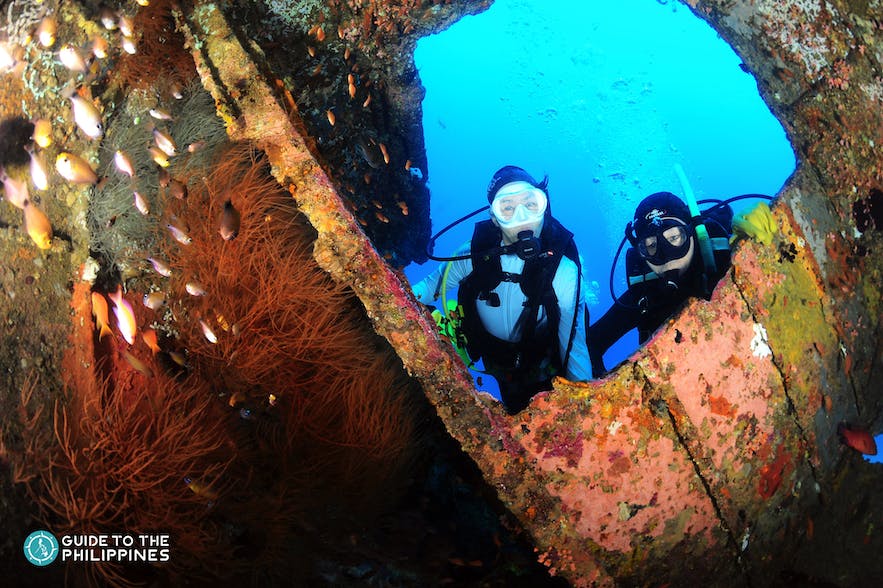 Cruising along on top of the decaying vessels presents a highly diversified residence of marine life, where divers can see dozens of species within meters.

Dive Tip: Bring a pointer stick (to place in the sand for staying put), a torch, and a magnifying glass.

There's a set of three canyons to the northeast side of Puerto Galera, right at the tip of the Island, on the Verde Island Passage. This dive site is like Snakes and Ladders for divers.

The canyons are 20-28 meters and stages one after the other, from the shallower to the deeper. Jump in and swim on top of the first canyon, then through a narrow drop down and rise again.

Being located on the passage exposes this site to strong currents, which means rich in nutrients, which draws schools of fish, like Giant Trevallies, Sweetlips, and Snappers.

Located an hour boat ride away from Puerto Galera, Verde Island offers great topography diving in one of the Philippines most diverse marine environments. 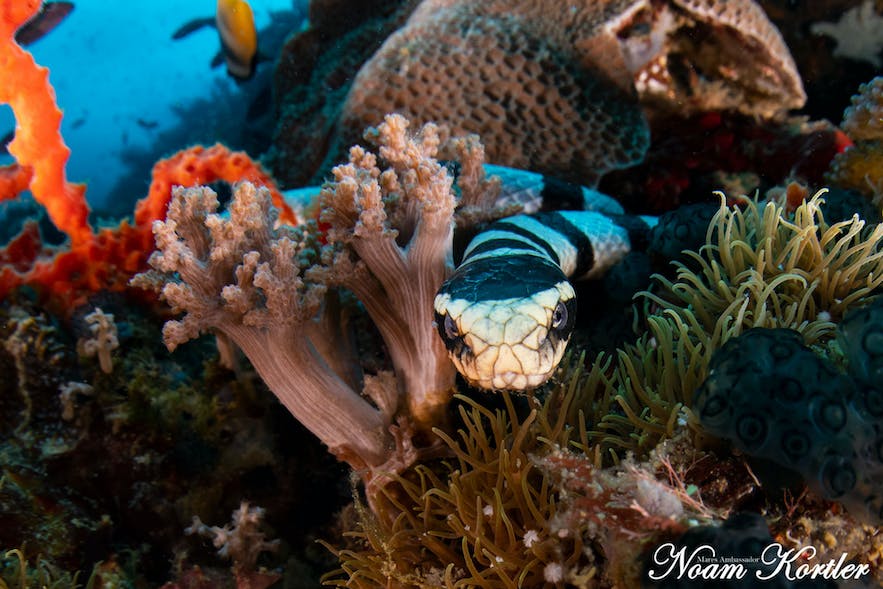 “If Yosemite Park were a reef, it would look like this," said the editor of Undercurrent Magazine. Pinnacles dive site takes its name after the rocky pinnacles that rise from over a hundred meters deep to kiss the surface on the East side of Verde Island.

Hard and soft corals have grown all over the rocks, shaping a vertical reef with massive gorgonian fans and sponges. Butterflyfish, juvenile Angel Fish, schools of the small, dark Red Tooth Trigger Fish, Sea Snakes, Frogfish, and some large pelagic schools can be easily spotted here. Dive tip: look into the blue to look for the occasional Rays and Tunas. 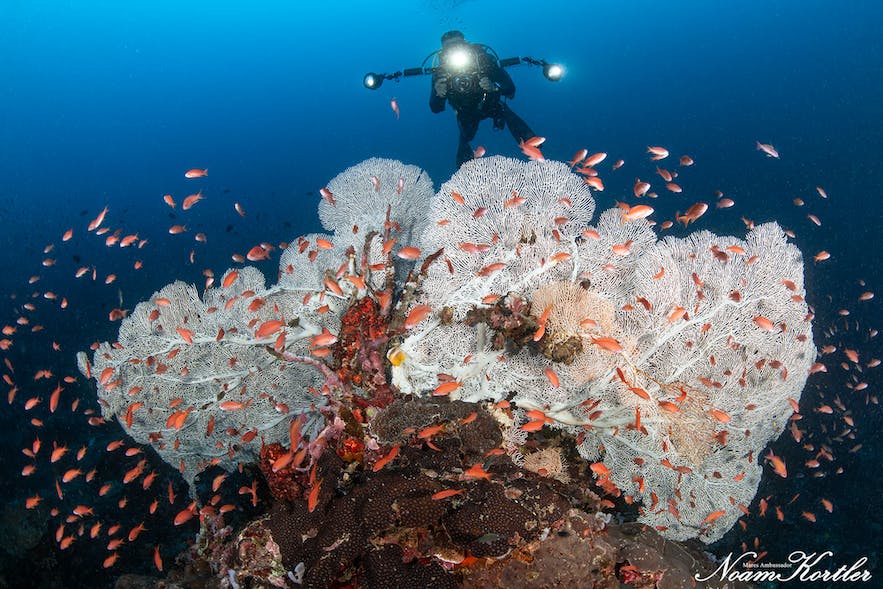 Watch your bubbles go round and round on a series of seven shallow gullies, where, on strong current days, you’d be thrown around like on a rollercoaster. Dropping and passing through each canyon in a slalom, the rocks that once formed the canyons are covered in colorful hard and soft corals.

On a slow to no current day, take your time and gracefully drift with thousands of orange Anthias who emerge and enter their coral shelter in an endless cycle, Moorish Idol and Banded Sea Snakes.

How To Get to Puerto Galera

Puerto Galera is accessible by ferry via the public port in Batangas, 110 KM south from Manila. Several resorts like Atlantis offer private transportation from Manila for their guests, which shortens trip time by half. Check our Puerto Galera guide for details on how to get there.

Where To Stay and Dive

RONI BEN-AHARON of Atlantis Dive Resorts and Liveaboards is a global nomad who enjoys soaking up the sun, exploring trails, and diving. She’s been working in marketing/ management in the tourism industry for over a decade.