11 Best Festivals to Join in the Philippines 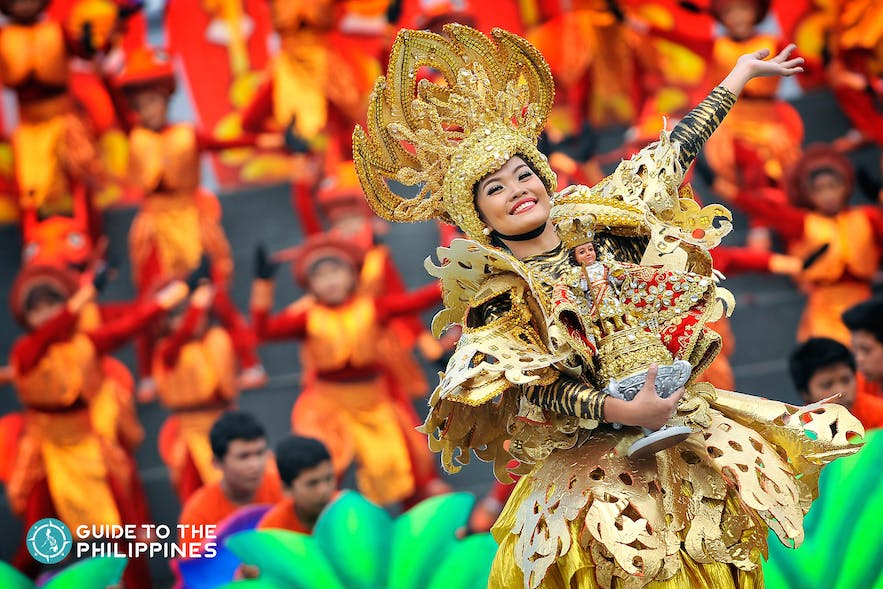 Experience the colorful culture of the Philippines by joining the vibrant festivals around the country. Find out the top festivals that are worth traveling to and learn about the event highlights in this article.

The Philippines is known around the world not only for its stunning natural wonders, but also for the locals' love to get together and celebrate. A proof of this is the long list of cultural festivals in the country.

There are a number of holidays, long weekends and top festivals in the Philippines that happen throughout the year. These vibrant festivals are characterized by the history, artistry, creativity, and passion of the people. While some of them take place for just a day, a lot of them are celebrating for a week and even for an entire month. 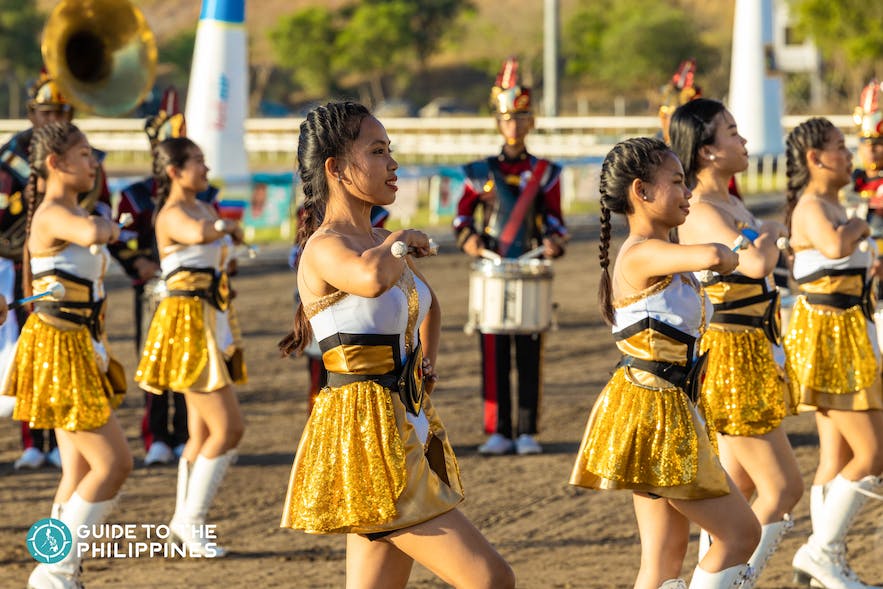 Travelers are attracted by these celebrations, along with the energetic, colorful, and fun environment they create. In fact, some of the celebrations are some of Asia’s most popular festivals.

Here is a list of the best and must-see festivals in the Philippines: 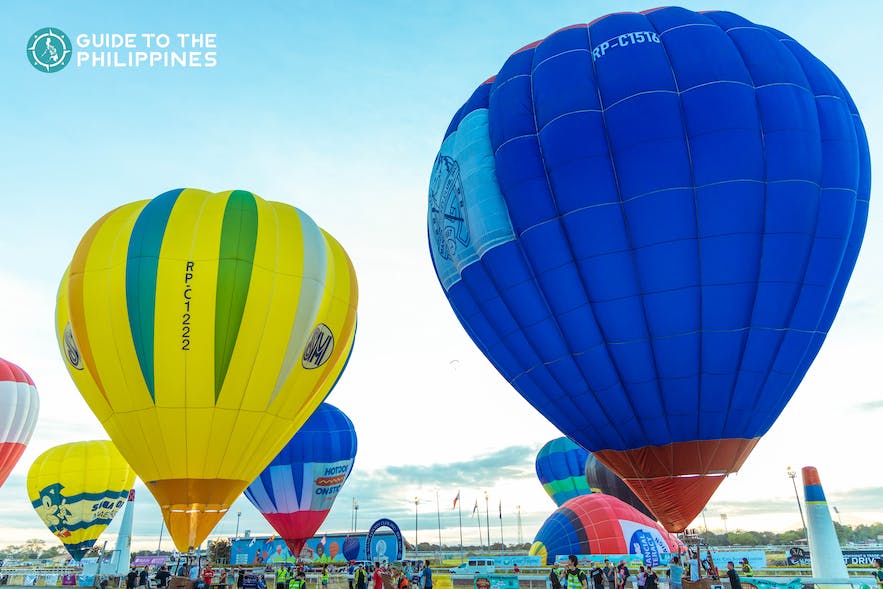 When: February or March

Unlike most of the traditional festivals in the country, the Philippine International Hot Air Balloon Fiesta is an extraordinary one and is often hailed as one of the top events in Pampanga. This 2020, however, it will be held at San Lazaro Leisure Park in Carmona, Cavite.

This 3-day festivity will surely delight the attendees with things and activities that include flying, skydiving, formation flying, paragliding, aerobatic displays, and hot air balloons.

People all over the country and across the world gather during February to experience Asia’s longest-running sports event and to celebrate the heart’s day with their loved ones. 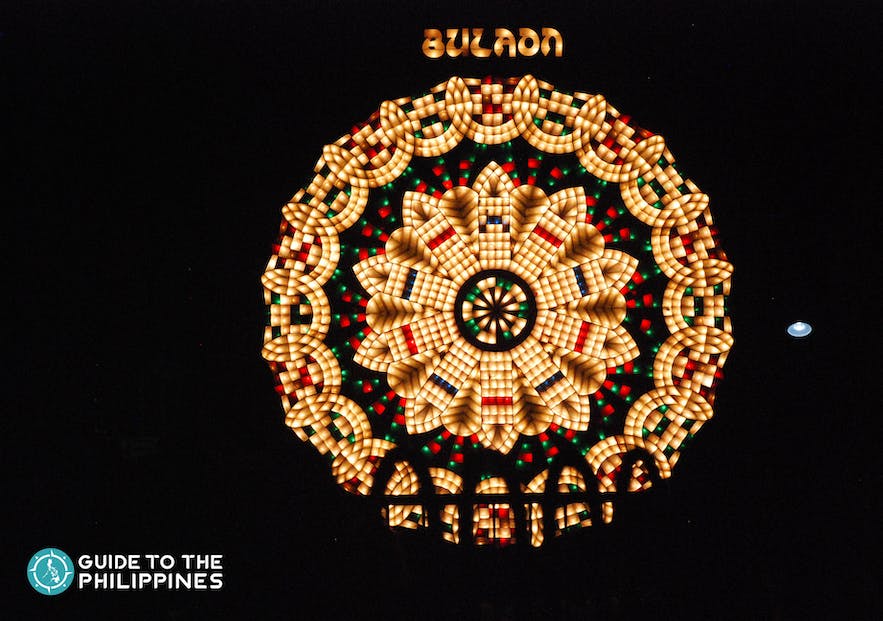 Anyone will feel the holiday vibes during the Giant Lantern Festival in Pampanga. San Fernando City or the Christmas Capital of the Philippines organizes the competition of giant lanterns during the weekend before Christmas Eve.

Participants create gigantic and bright lanterns made from locally sourced materials and parade them to each barrio in Pampanga before the midnight mass of Christmas. Add some Pampanga activities to make your Christmas holiday more special. 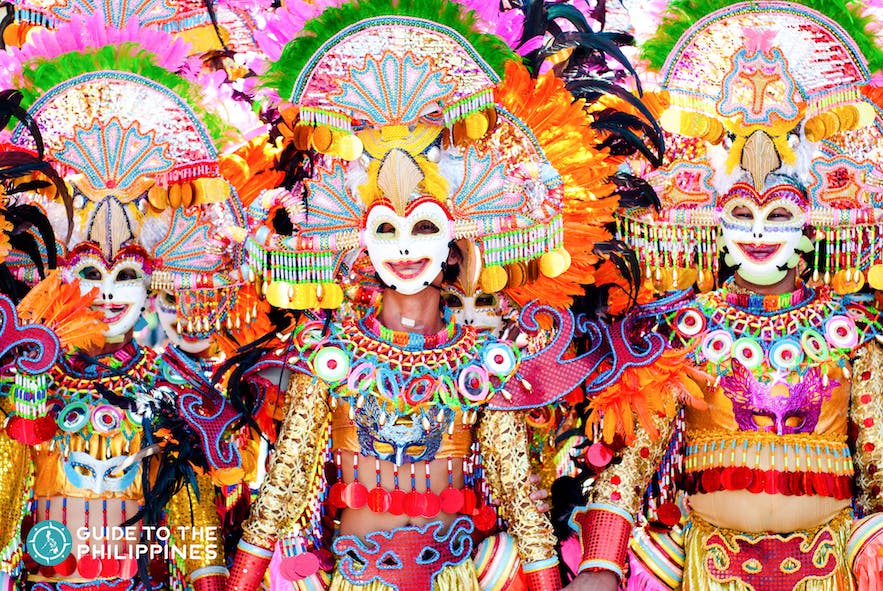 The MassKara Festival in Bacolod is a giant masquerade party hailing from the country’s City of Smiles. Thousands of young people wear colorful masks decorated with flowers, feathers, beads, and paints.

Aside from trying top Bacolod experiences, make sure to participate in the MassKara festival to get a full picture of the province. It's filled with people wearing festive costumes and masks while dancing with the beat of the loud music and spreading the friendly, welcoming, and happy atmosphere.

A religious festival celebrated in the name of Santo Nino, the locals of Tacloban City parade around the city with their bodies and faces painted with vibrant colors of green and blue, which symbolizes Leyte’s ancestral people.

Locals fill the street and perform traditional dances in honor of Santo Nino. Some dancers also use designs that look like arbors to depict warriors who lived in Leyte decades ago. Join a Tacloban day trip to fully experience the province to the fullest. 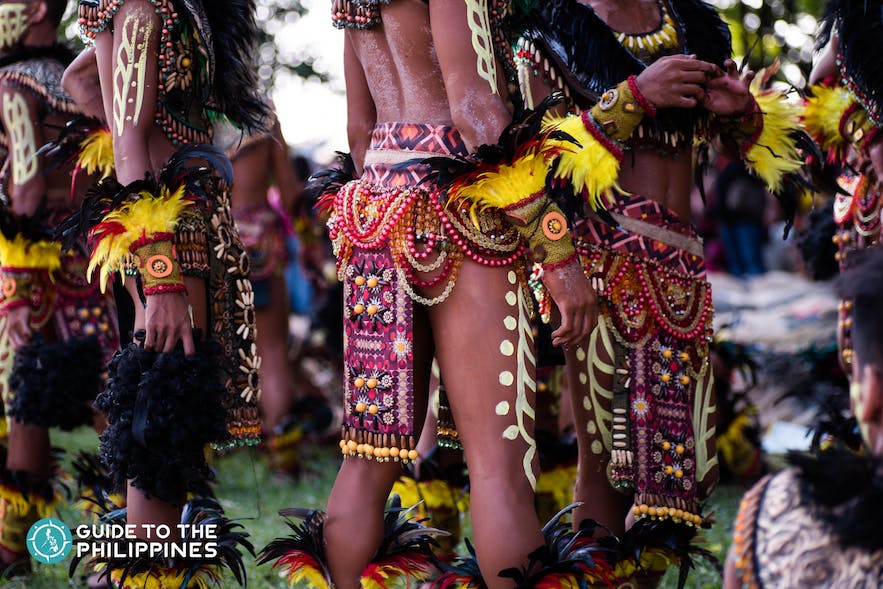 Although relatively new, the Aliwan Festival in Pasay City of Metro Manila, is by far one of the most popular festivals in the Philippines. Due to its popularity for Filipinos and foreigners, it is called the “Mother of all Festivals."

This festivity, which started in early 2003, is known as more of a competition than a festival. It aims to promote the diversity in the country, with thousands of participants showcasing their cultures, and the winner bringing home a million pesos as the cash prize. 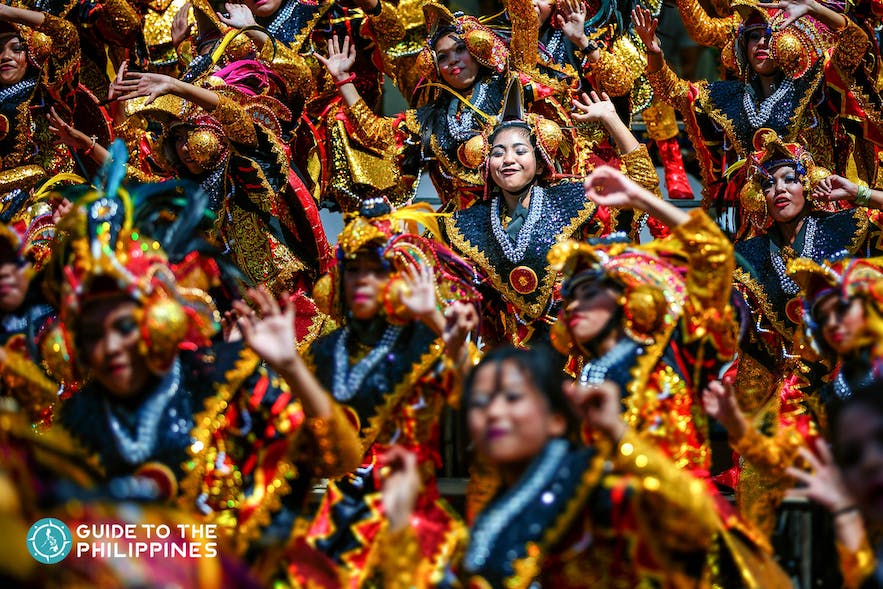 Davao City brings its locals and residents in the biggest celebration of Kadayawan.

Kadayawan Festival takes place during the third week of August. You can try Davao tours during your stay then watch the flourish with street dancing, beauty pageants, floral floats, and fireworks displays. Locals also showcase flowers, fruits, and other products from the city.

The people of Iloilo take street dancing into a whole new level during the Dinagyang Festival.

The whole city of Iloilo transforms into a huge street party complete with bands in every corner and street performers. Mouthwatering and overflowing local delicacies and drinks are served while watching the performances. To cap everything off, barangays and schools compete against each other on a street dancing contest. 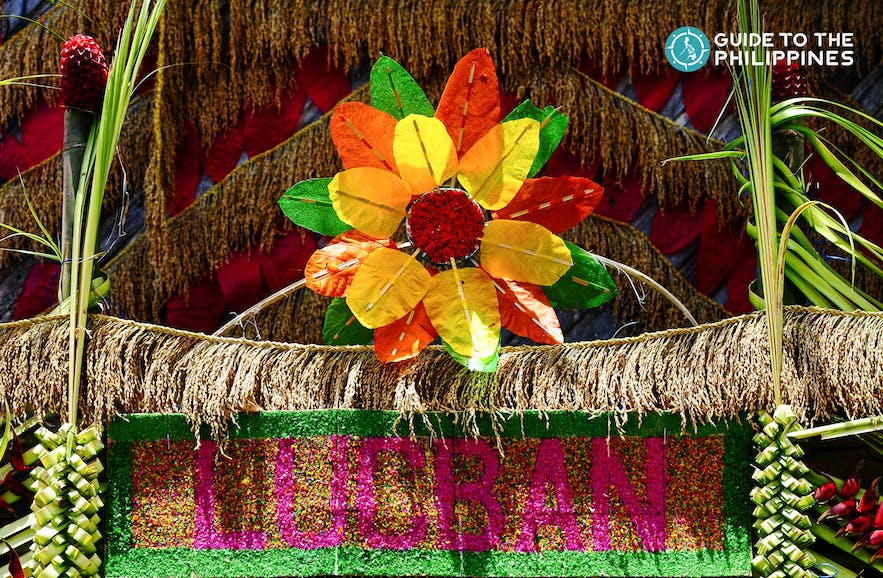 During the month of May, Lucban showcases a unique harvest festival also known as the Pahiyas Festival.

Locals decorate their homes in lively and vibrant colors. Farm produce like handicrafts, fruits, vegetables, and kiping (rice wafers) are hanging around the houses as decorations. People also bring in their own baskets and pick the fresh produce - free of charge!

When: Holy Week, March or April

During the Holy Week in the country, people flock to Marinduque to experience the weeklong celebration of St. Longinus: the Moriones Festival.

Combining the Catholic pageantry with folk mysticism, people wear helmets and don in centurion costumes to reenact the beautiful and theatrical play where one of the locals play the role of St. Longinus and hide among the houses while the others search for him. It's a great way to spend meaningful time in the province aside from joining Marinduque excursions. 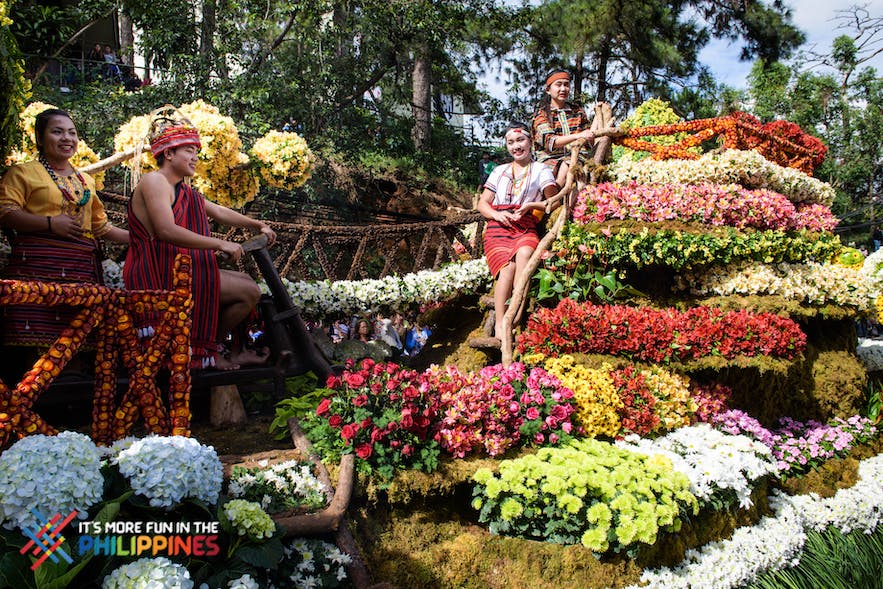 Panagbenga or the Season of Blooming is one of the longest Philippine festivals, observed during the entire month of February in Baguio.

This festival highlights the bountiful blooming of the flowers and to pay tribute to the rising up of the city from the 1990 Luzon earthquake.

During the festival, expect beautiful parades of floats made from different flowers, parading throughout the city, followed by children and adults adorned as flora and fauna. 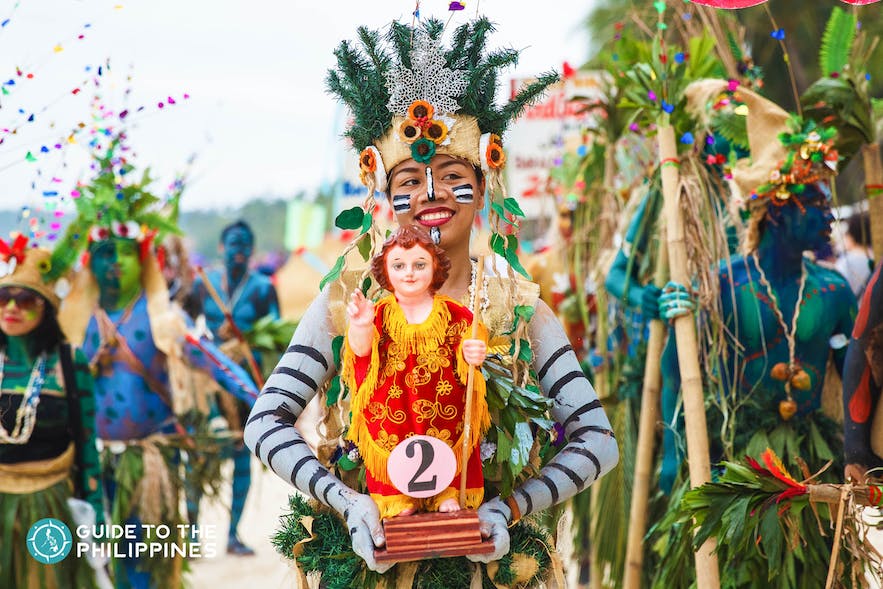 This grand festival lasts for the whole week, often starting its peak during the third Sunday of the month of January. With activities set from sunrise to sunset, people are parading on the streets with colorful paints on their faces and wearing indigenous costumes.

The highlights of the Ati-Atihan Festival are the tribal dances, the booming drum beats, the loud chants, and the Catholic rituals, which will surely make any visitor dance their heart out.

Experience Festivals in the Philippines 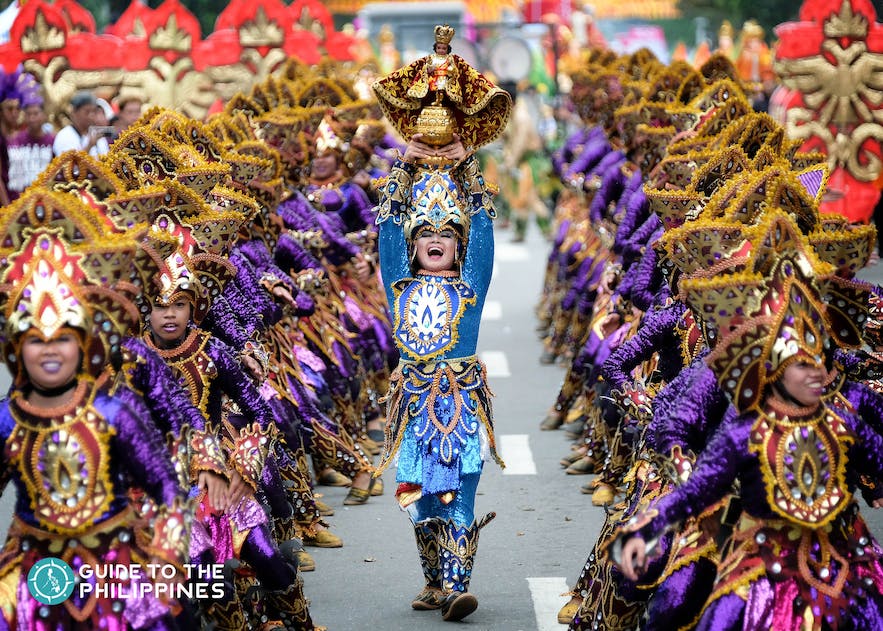 The Philippines is not all about island-hopping and food trips. There are plenty of things to discover, and a lot of them can be seen by attending one of these best festivals in the Philippines. Go ahead and pick some of your best bets from the list above and start planning your trip to these Philippine destinations by reading more of our travel guides.