First Time in Cebu? Check Out These Top 5 Tourist Spots and Activities

By Grayson Yañez
Verified Expert
Jump to chapter
IMPORTANT: The destinations featured in this article may have COVID-19 travel restrictions and requirements. Check our Cebu travel guide for the travel requirements.

Dreaming of a destination holiday that gives you the best of both city sights and island bliss? Look no further than Cebu in the Philippines!

The province of Cebu is a wonderful treasure chest of urban architecture gems, rich cultural heritage, idyllic islands and turquoise waterfalls, captivating wildlife, world-class Cebu hotels and resorts including some of the best Philippines luxury resorts, and sumptuous local food — perfect for those who are looking for the total package on a holiday! If you time it correctly, you can even experience and take part in the colorful and exciting Sinulog Festival.

Cebu has also been named as one of the best islands in Asia and Cebu City as a UNESCO Creative City. It’s no wonder that it welcomes around 2 million foreign visitors every year. 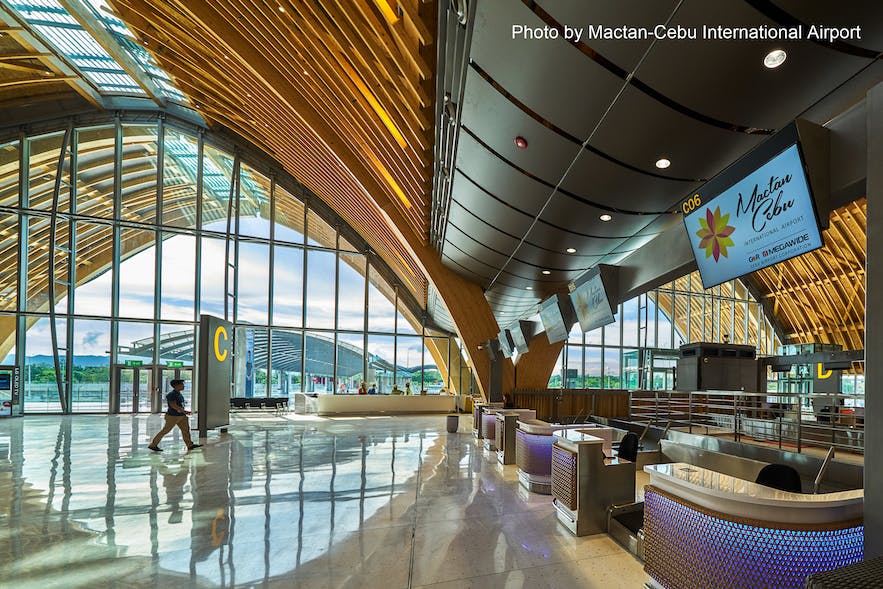 Flights to Cebu arrive at the Mactan-Cebu International Airport, which also received a top distinction at the 2019 World Architecture Festival, so expect to be greeted with world-class facilities and the Cebuano brand of hospitality.

If it’s your first time in Cebu, here are some of the 5 highly-recommended tourist spots and activities you shouldn’t miss!

5. Experience the Sardine Run in Moalboal 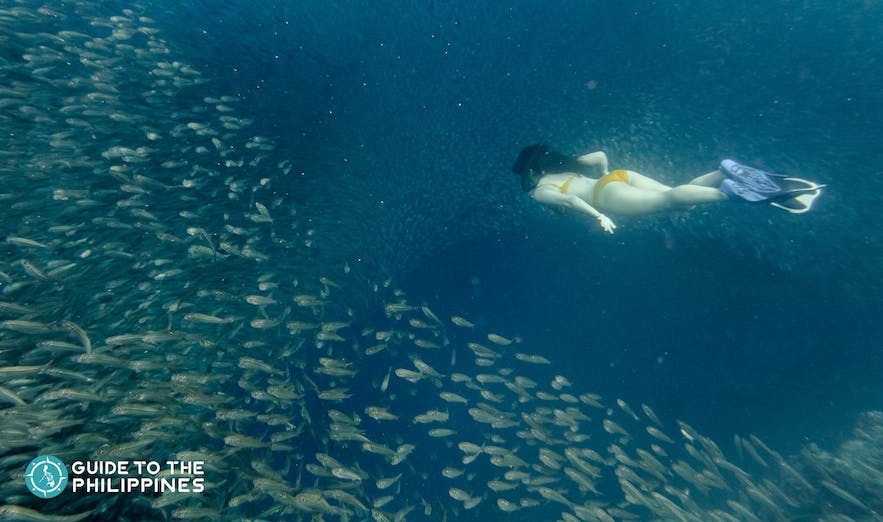 Imagine swimming in blue seas surrounded by a million sardines. At the coastal town of Moalboal in Cebu, a must-try unique experience is the sardine run!

Located at the southwestern tip of Cebu, Moalboal has become a favorite destination in Cebu primarily for its close proximity to Kawasan Falls, another top attraction in the province. The town also has white, sandy beach stretches perfect for relaxing getaways. 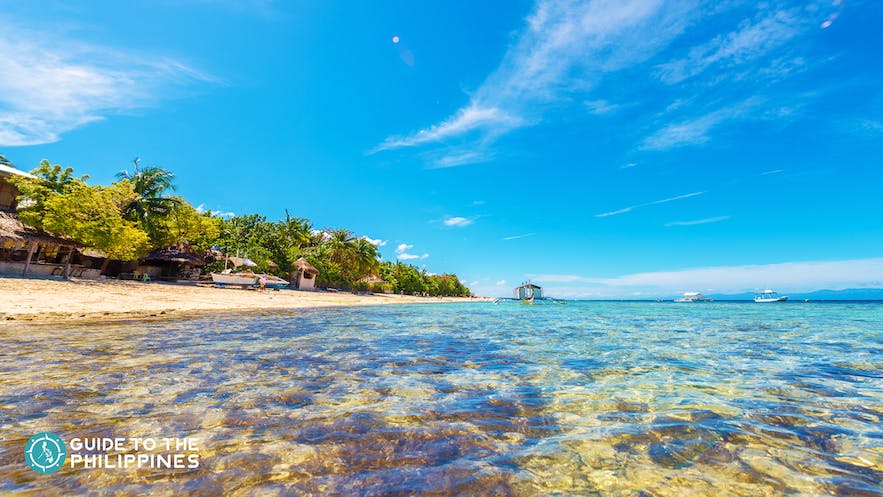 Panagsama Beach is one, and it’s where the now world-famous sardine run occurs. What’s best about this activity is that just 30 meters away from shore, you can already swim with this large group of sardines, circling and dancing their way around you.

A number of green sea turtles also call Moalboal’s shores home. If you’re lucky, you can easily spot them even in very shallow waters.

4. Dive with Thresher Sharks in Malapascua 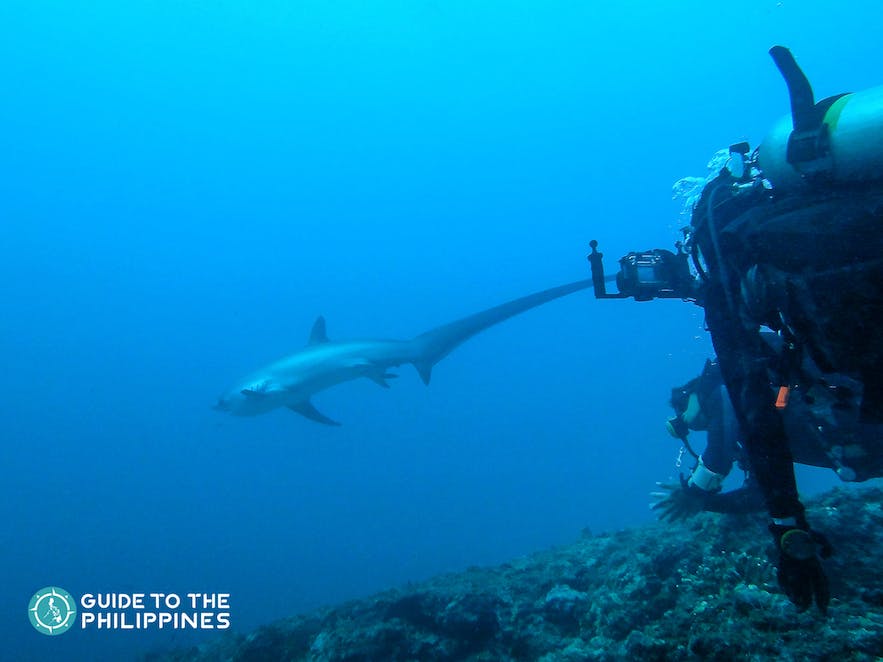 One definite thing that has made Cebu a hotspot for travelers from around the world is its rich, abundant marine life. Underneath Cebu’s sparkly coasts and crystal-clear waters are some of the best dive sites in the entire planet. Off the northernmost end of the province is a tiny island that packs a punch when it comes to diving: Malapascua.

Malapascua’s claim to fame and most prized natural treasure would have to be the thresher sharks — with its long, sword-like tail as its most distinguishing feature. It is reported that there’s no other place in the world where you can see threshers regularly other than Malapascua.

They can be typically found in Monad Shoal, also home to other marine creatures such as barracuda, tuna, moorish idols, and octopus. 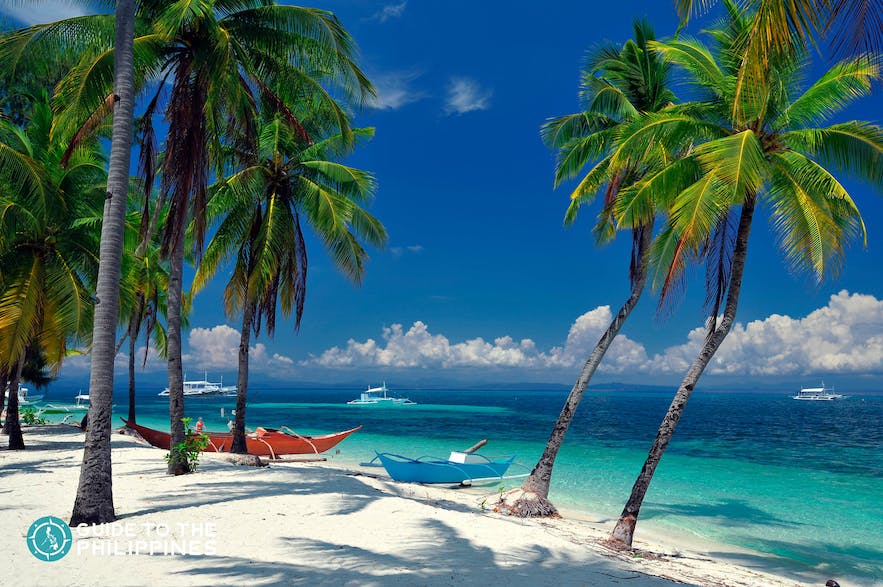 If you’re not feeling too adventurous for some shark action, Malapascua’s glorious pockets of beaches such as Bounty Beach and North Beach are more than perfect spots to just relax and sunbathe. 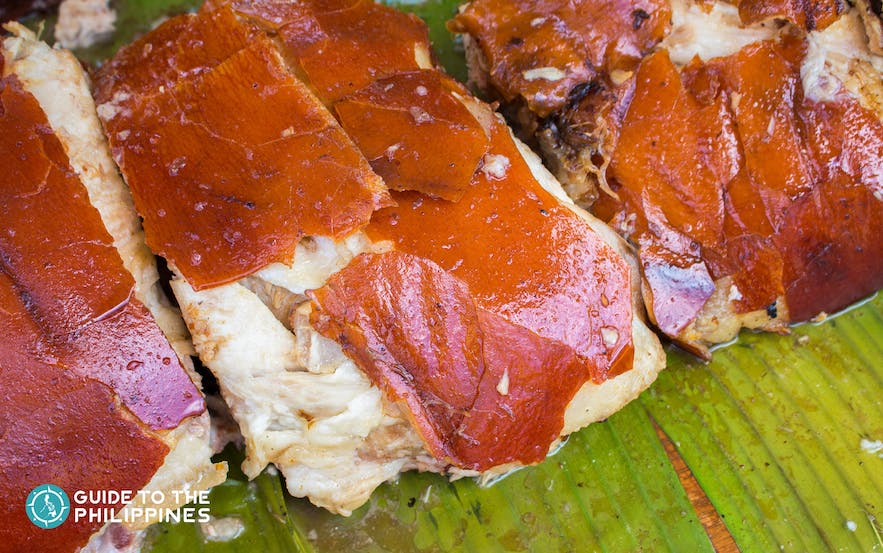 If there’s one food that is synonymous to Cebu, it’s definitely lechon. The legendary food enthusiast and adventurer Anthony Bourdain even proclaimed it as “the best pig in the world.”

Imagine a whole pig infused with various kinds of aromatics and roasted to golden, crispy skin perfection. That’s already a mouthful but wait until you taste the actual thing!

You can find lechon in many parts of the Philippines, and no birthday or festival or Christmas celebration with Filipino cuisine would be complete without it.

But Cebu’s lechon versions, especially the one from the town of Carcar, arguably have the crunchiest skin and tastiest meat among all. The best way to enjoy lechon is by pairing it with pusô (hanging rice) and eating with your bare hands.

A Cebu day tour won’t be complete without tasting lechon so do check out Rico’s Lechon, Zubuchon, Alejo’s, CNT, or House of Lechon for a gastronomic adventure you won’t ever forget!

2. Lounge in the Beaches of Bantayan Island 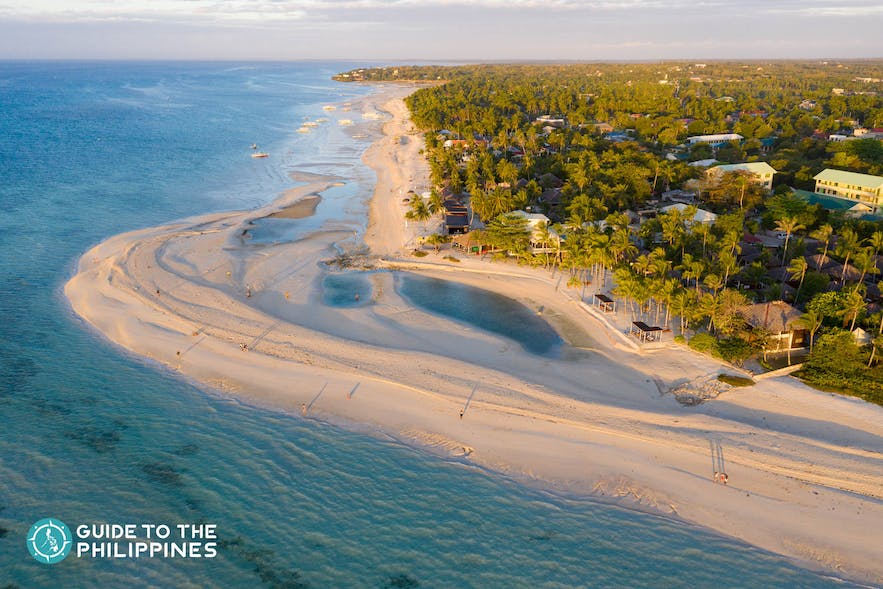 Off the northern coast of Cebu lies an island that is every definition of tropical bliss. Make sure to include Bantayan Island in your Cebu tour, where you will spend an amazing time basking under the sun, stepping on the powdery, white sand, and swimming in clear, azure waters.

Bantayan Island was once a sleepy fishing village, but backpackers and budget travelers soon discovered this idyllic hideaway and it has been welcoming more travelers since. But it was when Bantayan Island was used as a set location for a local film that it rose to popularity, especially with local travelers. 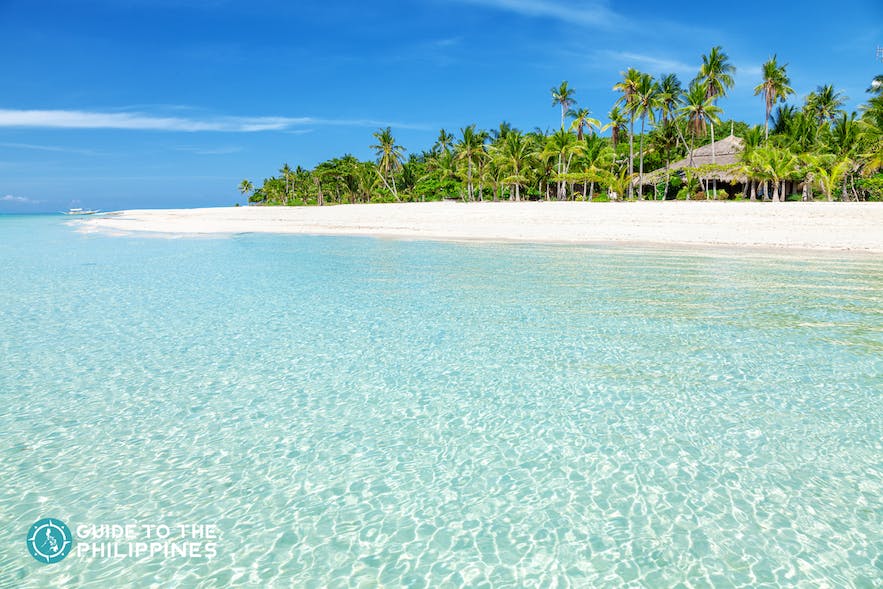 Locals and international travelers alike now flock to the island to lounge around Bantayan’s famed beaches including Kota Beach, Paradise Beach, and Sugar Beach. Ogtong Cave is also a popular tourist attraction and Kota Park is where you want to cap off the day for its spectacular sunset views.

Just when you thought Bantayan is just chill, Skydive Cebu also calls the island its home so if you want to take your trip to (literally) a higher level, then go take that leap of faith there! 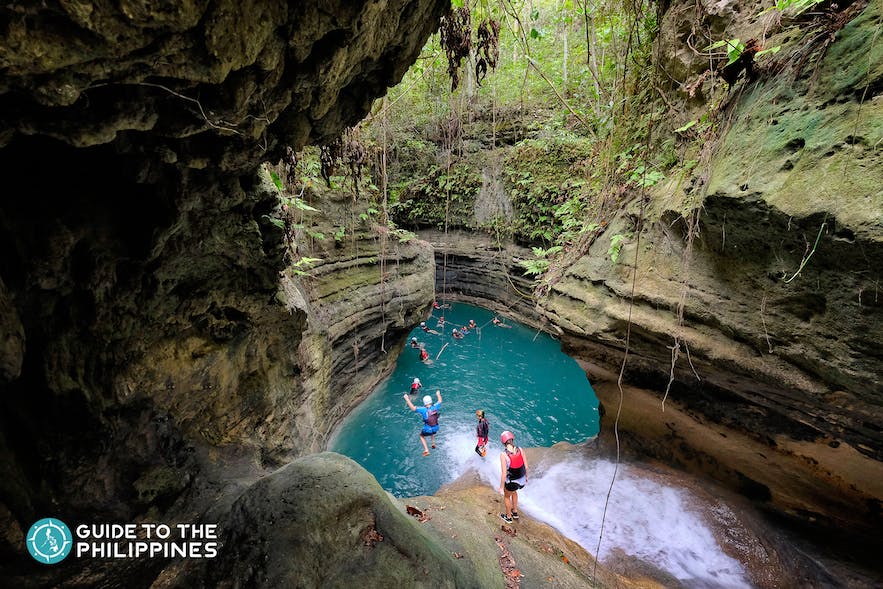 If adrenaline rush is the name of your game, then canyoneering to Kawasan Falls is the perfect activity for you! It’s definitely one of the most adventurous and fun-filled things to do in Cebu, as you spend half a day trekking through rivers and streams, jumping off cliffs and waterfalls, and swimming in cold waters.

This Cebu day tour starts in the town of Alegria, and you are already greeted by some of the highest jumps in the entire adventure. The majestic blue-colored river is surrounded by towering canyon walls, rocky cliffs, and lush greenery that will definitely leave you awe-inspired by mother nature’s beauty. 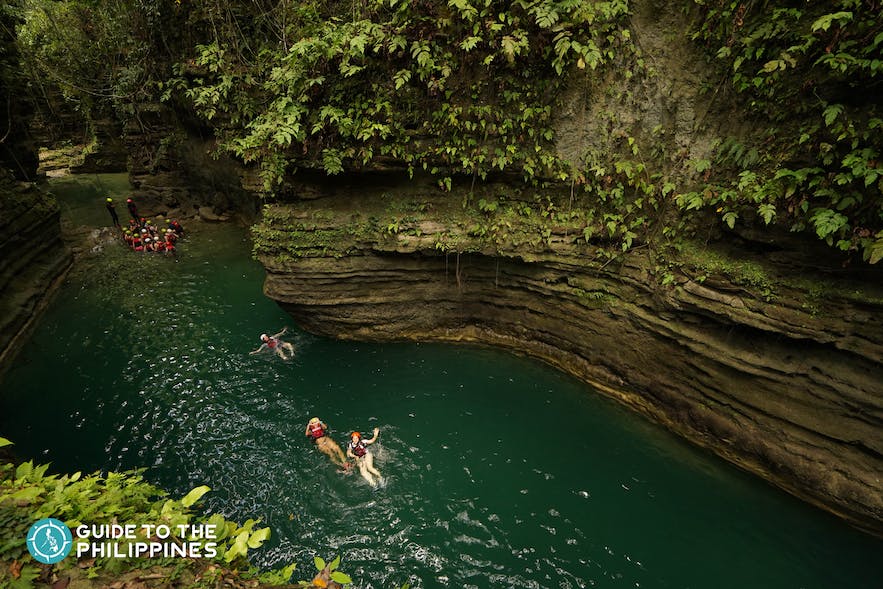 The trip continues with you swimming and floating along the river, walking through trails, and diving off small waterfalls, until you reach the Kawasan Falls.

The tour usually ends with a hearty lunch buffet at Kawasan Falls, where you can spend the rest of the time lounging by the natural pools or riding aboard a bamboo raft towards and under the waterfalls to get a natural water massage! 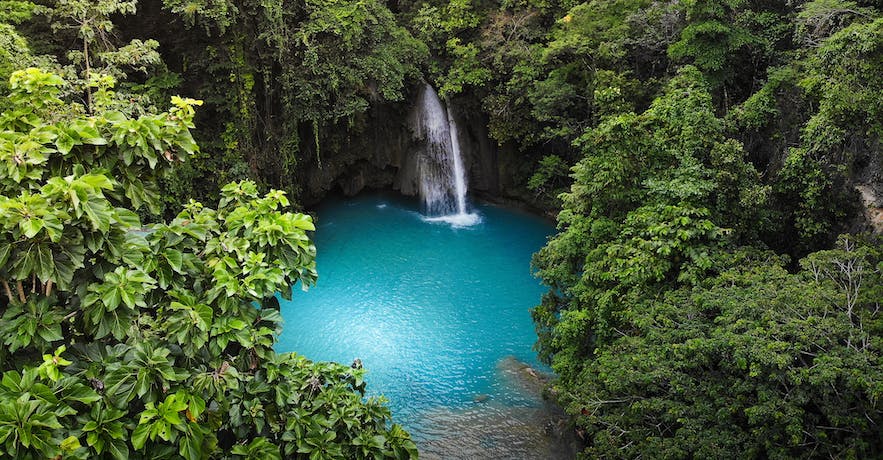 Start planning your trip to Cebu! Read up on other exciting things to do and tourist spots to visit in Cebu and other destinations you can visit from Cebu to help you plan your itinerary.