Moalboal, a small town a few hours from Cebu City, is filled with sights and activities in its abundant seas. Moalboal grew famous with travelers visiting the Philippines because of its underwater treasure of million sardines swimming and circling only off-shore — better known as the "sardine run"

What's great about this Cebu coastal village is that, amid its rising popularity among divers and backpackers, it has kept its laid-back elegance and small-town feel. It's not that far out, but it's also not too crowded or touristy.

The absolute cheapest time to visit Moalboal is normally late August to early September, which is called peak season.

The summer months of March, April, and May have the sunniest and hottest days, with temperatures sometimes exceeding 36 °C.

The months of October through February still have sunny days, but there is a risk of rain, particularly towards the end of the year.

Moalboal can get crowded during the summer and festival months.

Aside from Cebu's Sinulog festival, the annual Moalboal feast is celebrated on May 15 and 16. Moalboal is also known for its "Kagasangan Festival" , wherein tribal dances and music are performed. It is kept in remembrance of St. John Nepomuceno.

How to get to Moalboal

Moalboal is situated on Cebu's southernmost tip. Cebu is a major transportation center and travel hub in the country, with numerous direct flights from the Philippine capital of Manila and also foreign destinations such as Singapore, China, and Korea, among others.

Every major airline in the country has regular flights to Cebu, from early morning to late evening. It makes no difference what time you arrive in Cebu City whether you want to stay for a day or more. However, if you want to go straight to Moalboal after landing in Cebu, you can take an early morning flight.

Moalboal is a safe destination but make sure to be a cautious and responsible traveler. Clean up after yourself, particularly at the beach, and pick up trash whenever possible. Respect both the aquatic creatures and the locals; they share the same habitat.

Moalboal is not an isolated town, so transportation in and around the city is accessible   Riding a tricycle is the best way to get around.

If you know how to ride a motorcycle or scooter, motorcycles and scooters are available for hire in Moalboal for a day, and the rate can be reduced if you rent for a week or more. This is also a good way for you to get around the city and see the sights.

Panagsama Beach already has about everything you like, from restaurants to stores. They're all all close to and nearest each other, so getting around isn't a challenge.

Moalboal, a popular tourist destination, has some fantastic dining options. Lechon is common in this province as it is in Cebu. In Spanish, lechon means "suckling pig," and this dish is usually eaten at special events such as birthdays, holidays, and more festivities.

Best Neighborhoods to Stay in Moalboal

The best places to stay in Moalboal are either Panagsama Beach or White Beach. If you want to stay on a budget, stay in Panagsama, but if you want a more comfortable stay, there are some lovely resorts near White Beach. 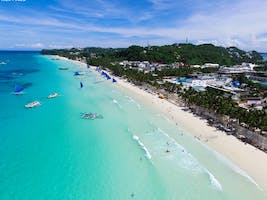