Palawan has been recognized as one of the best islands in the world by multiple online magazines. It is also one of the top destinations for scuba diving in the Philippines. El Nido, Puerto Princesa, Coron, and San Vicente are the four main tourist destinations in Palawan where you can book a Palawan island hopping tour. These destinations is home to more than 1,700 unspoiled islands and islets and other breathtaking Palawan top tourist spots.

Coron, a part of Calamian Group of Islands in Palawan, is well-known for its freshwater lakes, limestone cliffs, coral reefs, and wreck diving locations. Lastly, San Vicente, an emerging destination in Palawan, is full of natural attractions and is known for having the longest white sand beach in the Philippines.

When you book Palawan tour packages and Palawan tours, you will be able to visit most of the Palawan beaches in this island province if you add island and beach tours to your itinerary. This article lists down some of the top beaches in this province that should be a part of your Palawan itinerary: 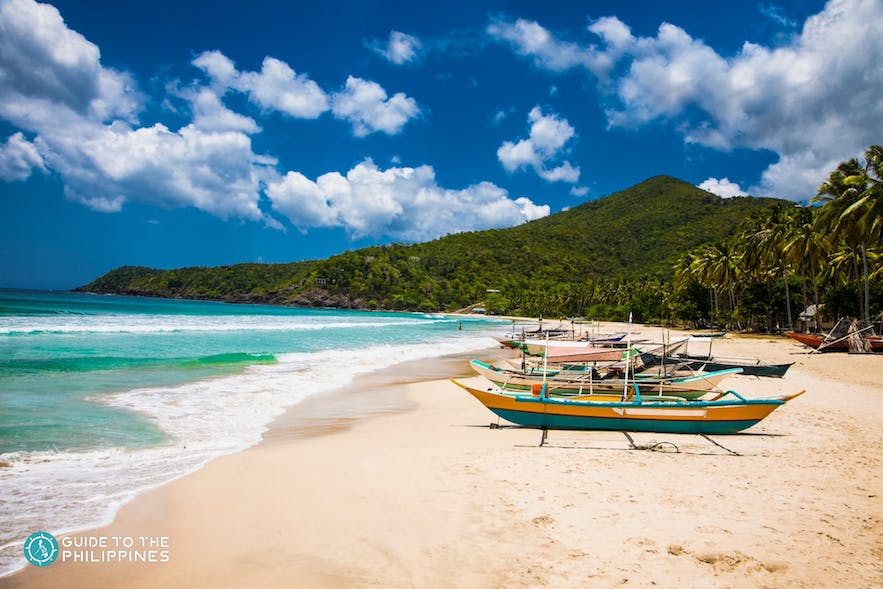 Sabang Beach is located in Sabang, a small village in Puerto Princesa, Palawan. Visitors of this tourist spot in Puerto Princesa may swim, watch the sunset, have some beverages, snap wonderful photographs, get beach massages, or just rest and take in the beauty of the surrounding natural landscape at Sabang Beach.

The beach is ideal for leisurely strolls or sunbathing, while its pristine aquamarine waters are ideal for taking a dip. This beach is also a popular lunch stopover for those doing the Puerto Princesa underground river tours. 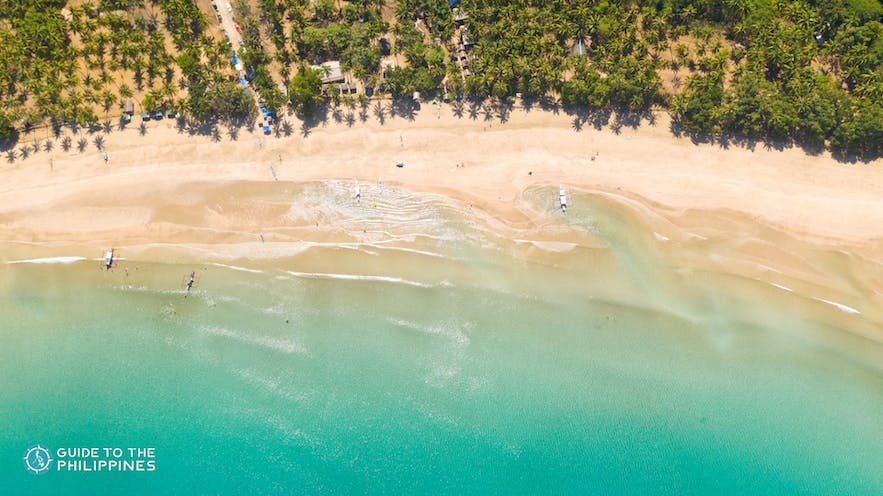 While here, you can go swimming, skimboarding, snorkeling, or lounging on its sandy shores. The beach is also perfect for beach sports, such as volleyball and frisbee. 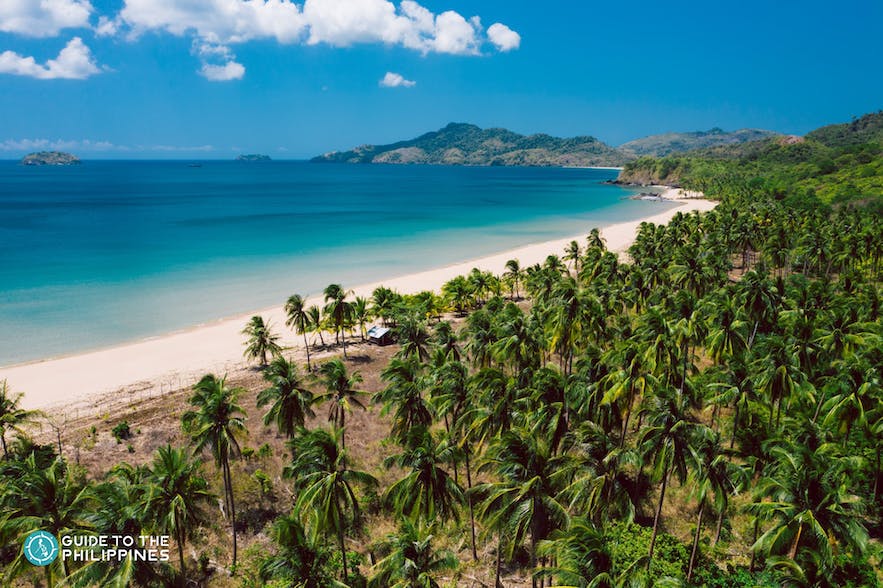 Duli Beach, located about 25 KM above the town of El Nido, is a picturesque 2 KM long stretch of sand. The beach features broad, golden, and white sand that gently drops into the deep blue waters. Additionally, Duli Beach has a forest with a lot of palm trees.

The beach is still mostly undeveloped, but it offers good surfing waves, making it the only surf beach in El Nido. Aside from surfing, Duli Beach also has good spots for swimming and snorkeling. 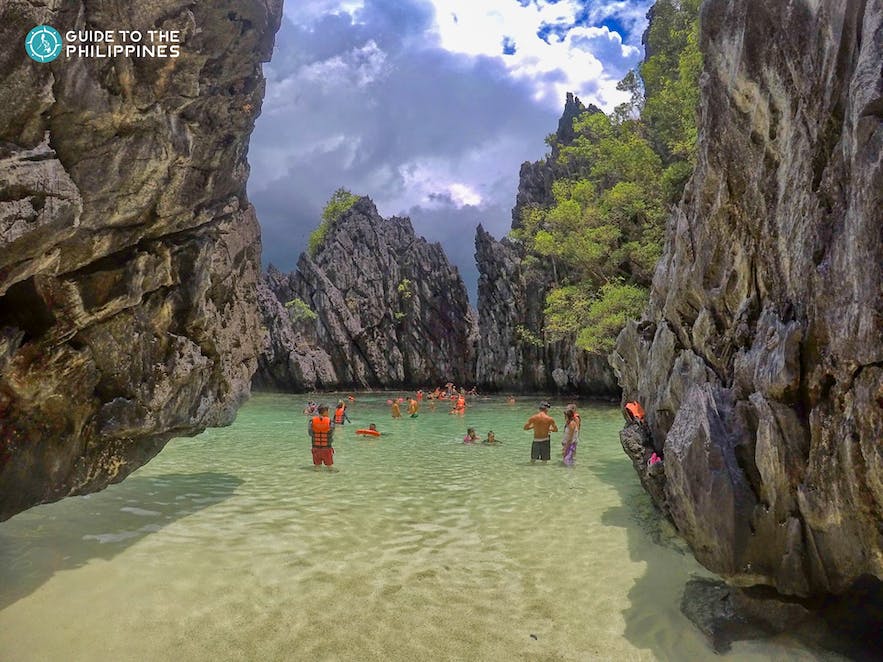 The Secret Beach is one of the top beaches in El Nido included in an El Nido island hopping tour. The beach can be found in between the towering limestone cliffs. In order to get to the secluded spot, you need to swim through a narrow crevice under huge rocks and come out on the other side, where the beach is.

There is only a small headspace between the rocks, so you have to be careful while navigating to the other side, where clear waters, fine white sand, and surrounding limestone cliffs await you. The secluded beach is just a small round space best for a relaxing swim.

One of Palawan's nicest beaches is Pamuayan Beach near Port Barton. This unspoiled beach has white sand extending for almost a mile, making it the ideal location for beach enthusiasts. Since it is located near a fishing village, you can interact with the locals and learn more about their culture and way of life. The beach is also near Pamuayan Falls, another top tourist spot in Port Barton, Palawan. 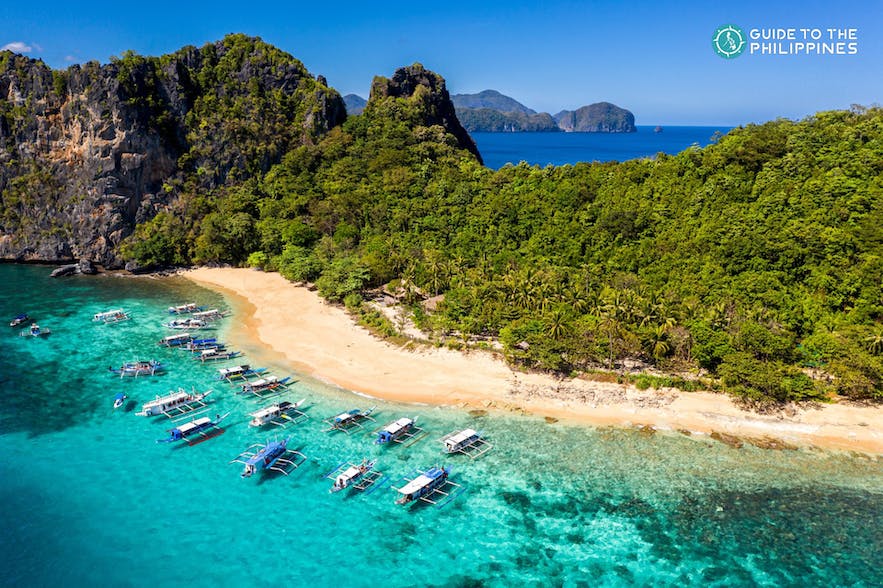 Dilumacad Island, also known as Helicopter Island, earned its name from the form it assumes when viewed from afar. Its powdery-white sand and azure seas will draw you in and hold your attention once you get there. It is a great location for lounging and taking in the stunning seaside scenery.

To see the outline of the helicopter, take distant pictures of the beachscape. Your images will look stunning against the backdrop of the soaring limestone rock formations, the azure lake, and the white beach. This tourist spot is often included in El Nido tour packages. 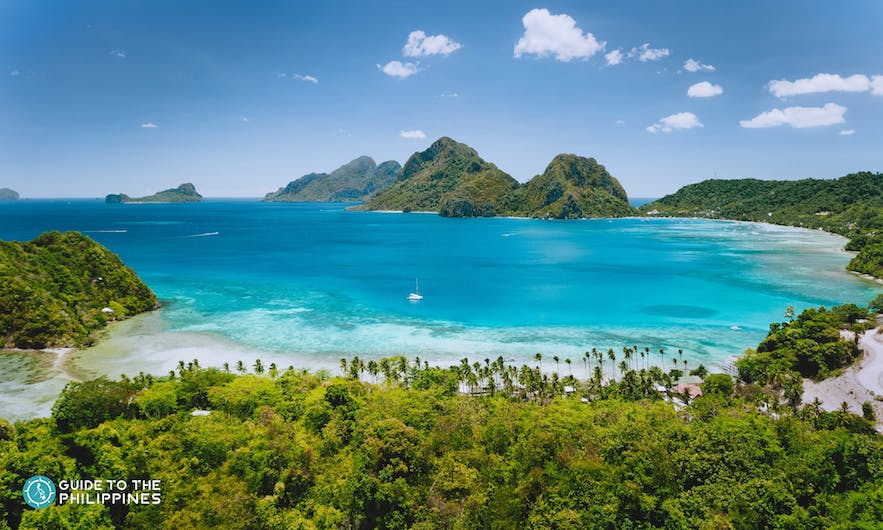 Las Cabanas Beach, located 2.6 KM from El Nido town proper, is a must-see for its lovely sunsets. Las Cabanas is a nickname based on the resort situated here, but it’s more locally known as Marimegmeg Island. Several bars and eateries border the beach.

While waiting for the sunset, you may purchase beverages and snacks or simply relax and enjoy the laid-back atmosphere of this El Nido tourist attraction. For activities to do in El Nido, Palawan, try the Las Cabanas zipline for a different way to enjoy this beach, and you'll be treated to an amazing view. You can also have cozy dinners or relaxed drinking sessions by the beach here at night. 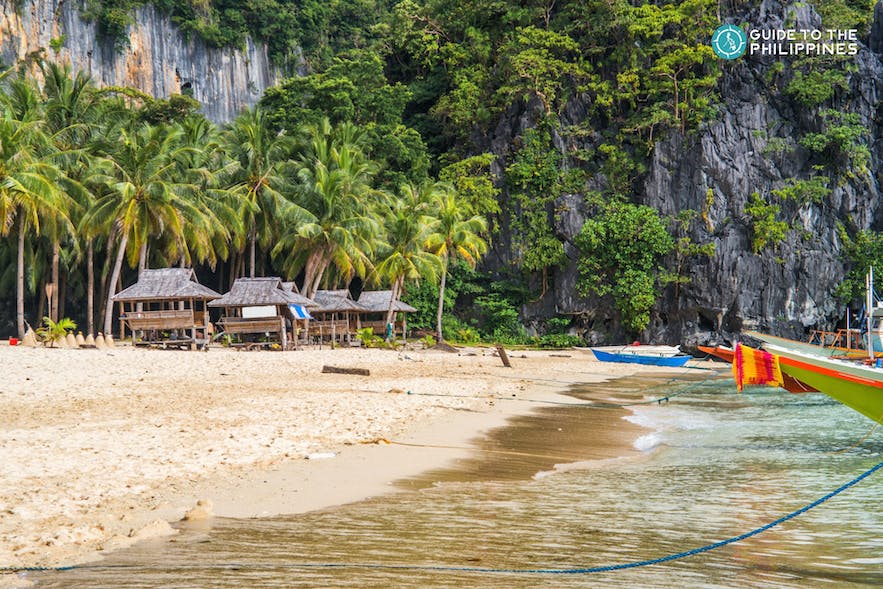 The 320-meter Seven Commandos Beach has a lengthy stretch of pure white sand beneath the stunning El Nido limestone cliffs and a line of swaying coconut trees. One can't help but wonder how the beach received its moniker. According to legend, seven troops were stuck here during World War II. The shore at Seven Commandos Beach is large enough for visitors to play beach sports like volleyball and frisbee.

The beach is particularly noted for its calm waves. After a long day of kayaking in the lagoons, you can unwind by the crystal-clear seas of Seven Commandos Beach. It also has abundant marine life underwater, which makes it an excellent location for snorkeling if you’re yet to try scuba diving in El Nido. 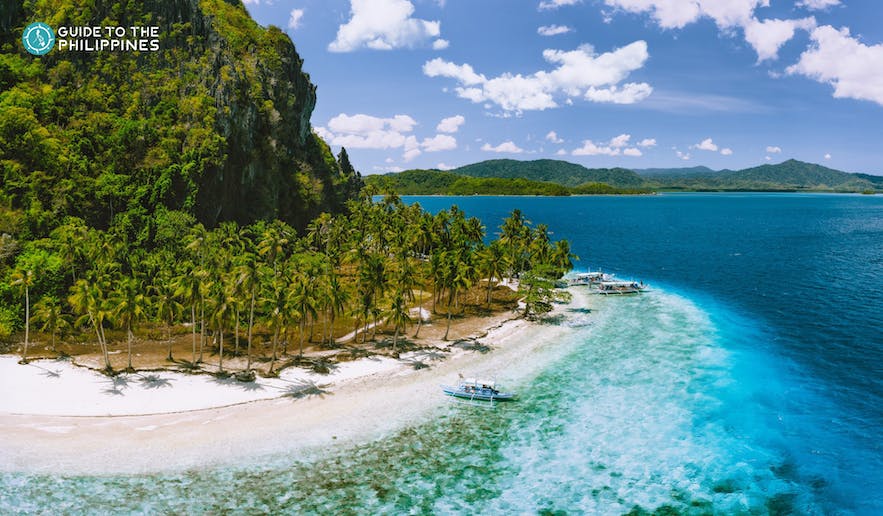 Pinagbuyutan Island is a rare gem of El Nido, Palawan often included in El Nido tours. This island is more known for its unique shape than its white sand beach. From afar, this island looks like one giant rock sitting in the middle of Bacuit Bay of Palawan. As you draw closer to the island, one will see that its whole landscape is made of pure limestone cliffs.

These steep walls are all natural and have been formed more than 125 million years ago. Because of the presence of limestones, Pinagbuyutan Island is locally called Inabuyatan Island which means Enchanted Island when translated to the local language. 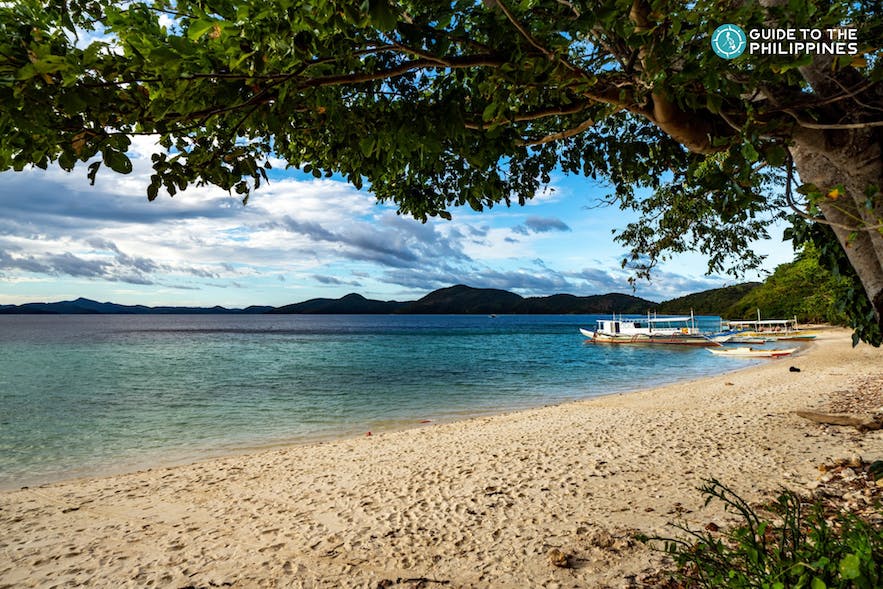 Dicalabuan Island, also known as Banana Island, is one of Coron's family-friendly islands and a popular destination for both locals and visitors. It's frequently paired with island hopping trips to Bulog Dos and Malcapuya Islands.

Locals gave the island the moniker "Banana Island” because when viewed from a distance, it is said to resemble a golden fruit. Fine white sand, sparkling seas, mangrove plants, and granite formations make the island a lovely place.

Because of its shallow seas, children may be able to swim freely. Banana Island is often included in Coron tour packages, making it a family-friendly attraction. 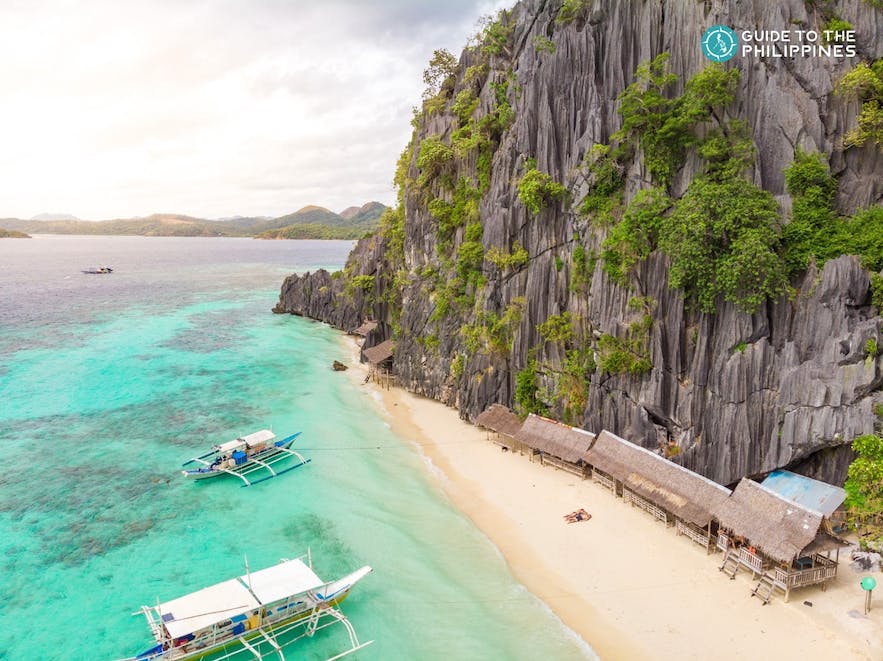 Banul Beach or Banol Beach is a tropical paradise and is one of Coron's best beaches. It’s also a popular lunch stopover of various Coron tours. This small beach in northwestern Coron Island is renowned for its exceptionally fine white sand beaches, smooth and calm seas, and nearby calcareous karst cliffs.

While in Banul Beach, you may swim, ride a kayak, lounge by the sand, or relax by the nipa huts that border the beach. 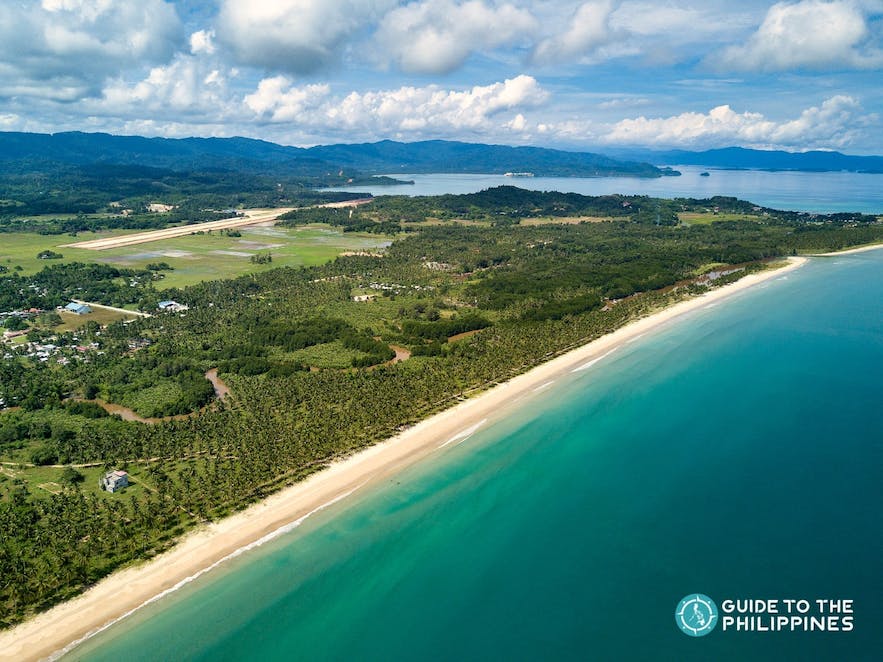 Long Beach San Vicente is the Philippines' longest beach, with 14.7 KM of pristine white sand. It is made up of four towns in San Vicente, Palawan: San Isidro, New Agutaya, Alimanguan, and Poblacion. Because it is unspoiled and uncrowded, this beach is great for anyone who want a relaxing day under the sun. In this tropical paradise, you may swim and sunbathe, relax and unwind in one of its nipa huts, drink fresh coconut water, and watch the sunset. 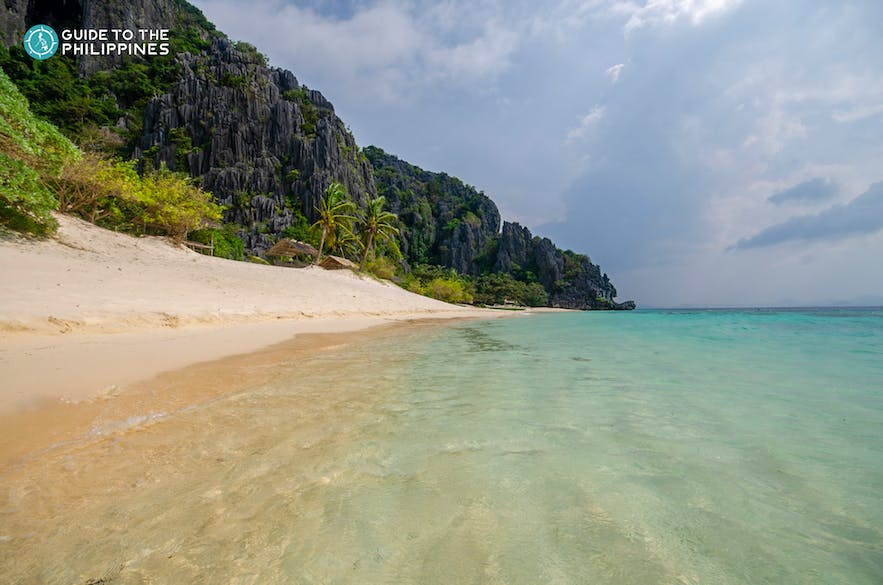 Black Island is Palawan's biggest island in the Calamian Group of Islands, located northwest of Busuanga Island. It’s called “Black Island" by the locals because the massive limestone rock structure in the island's center seems to be dark and scary from afar.

Black Island, however, is a delightful paradise of immaculate white sand beaches, cave pools, and turquoise seas. It's ideal for travelers that enjoy outdoor activities such as trekking, cave exploration, snorkeling, or a relaxing day at the beach. 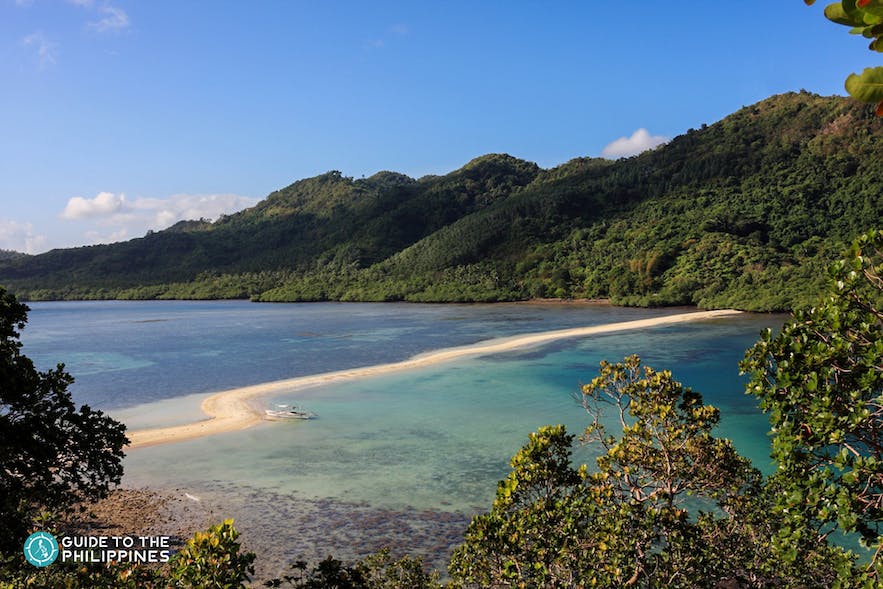 Snake Island, officially known as Vigan Island, is a very popular beach destination located in El Nido, Palawan. The name of the island was informally changed by the locals to what it is called now because of its unique curve that resembles a snake.

The S-shaped sandbar here, which is approximately 3 KM long, serves as the connection of mainland Palawan to the islet. The small island, which is often included in an El Nido island hopping tour, is best visited during low tide when the unique, white sandbar is most walkable and visible. 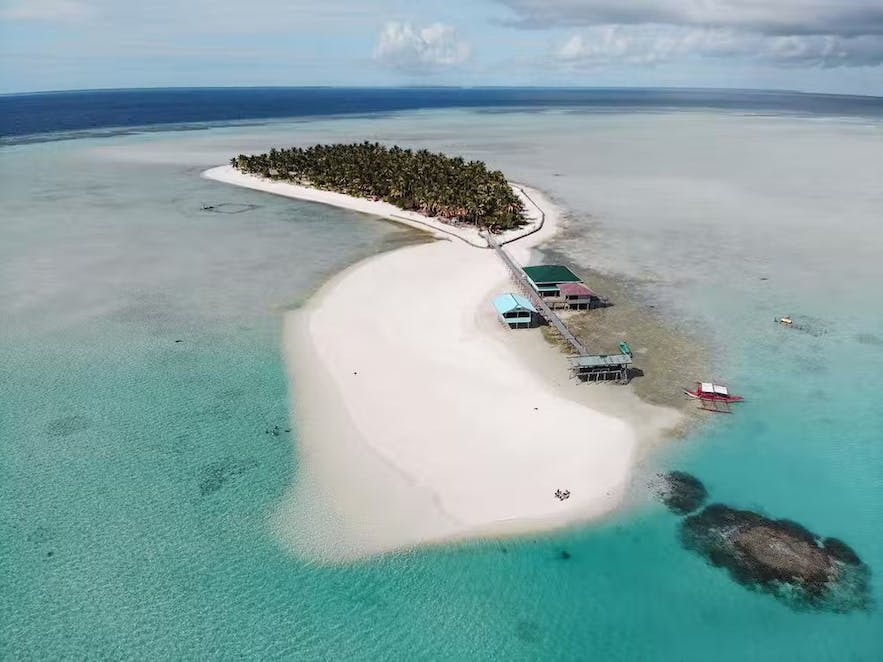 Onok Island, located in the south of Palawan and part of the Balabac Group of Islands, is an unspoiled beach with broad, shallow, clear seas, a sand bar that appears during low tide, wild sea turtles and giant clams, a vibrant reef, and a water boardwalk. Aside from swimming and snorkeling, you can go freediving here and swim with sea turtles. 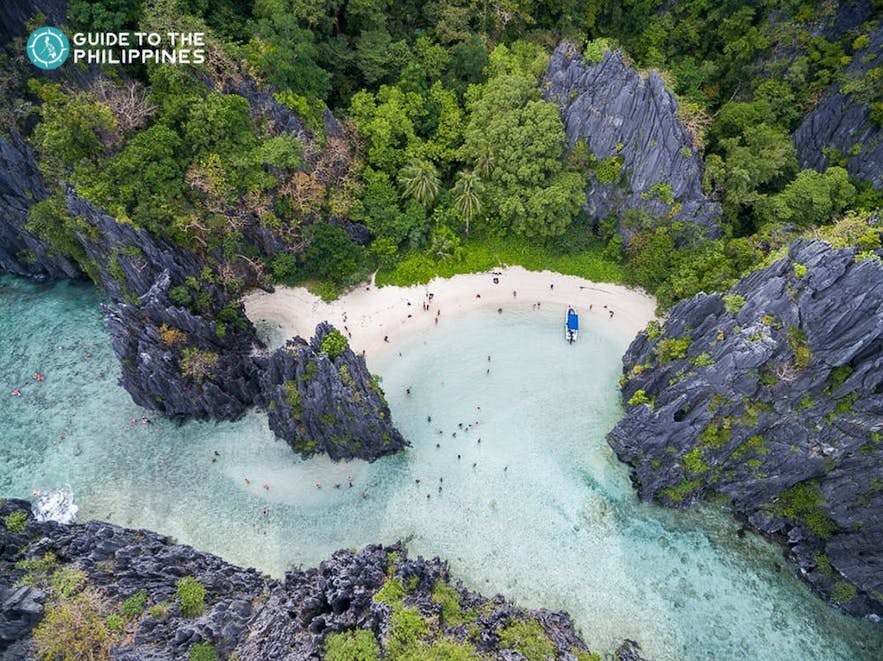 Concealed by towering limestone formations, the Hidden Beach looks like a natural infinity pool. As its name suggests, this beach can’t be seen from the open sea. There is an imposing cliff that seems to “guard” the place from the eyes of the world outside. To get there, you have to swim, with its waters starting to lower to knee-deep levels as you approach the beach. The rocks and coral can scratch you as you approach; you can try floating instead to minimize the chances. 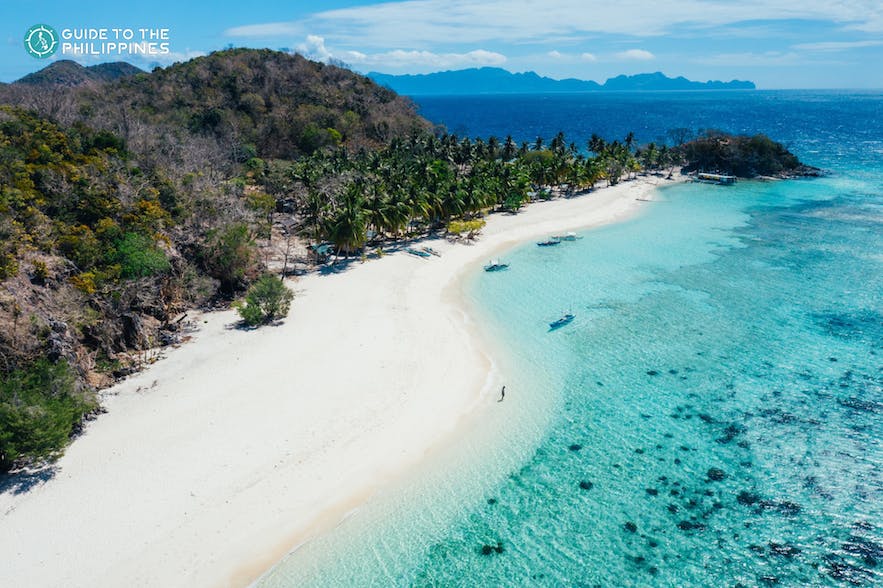 Located just an hour from Coron town and Coron restaurants, Malcapuya Beach is one of Culion's best beaches. It features a 1.5 KM stretch of pure white sand and has a great underwater spot with marine life and vibrant corals. The waters of this unspoiled beach remain shallow across varying distances, making it ideal for a long swim.

A vast coral bed with a diversity of marine life, including enormous clams and clownfish, may be found 100-meters out. Because of its popularity, Malcapuya Beach has become a top destination of Coron Palawan island hopping tours. 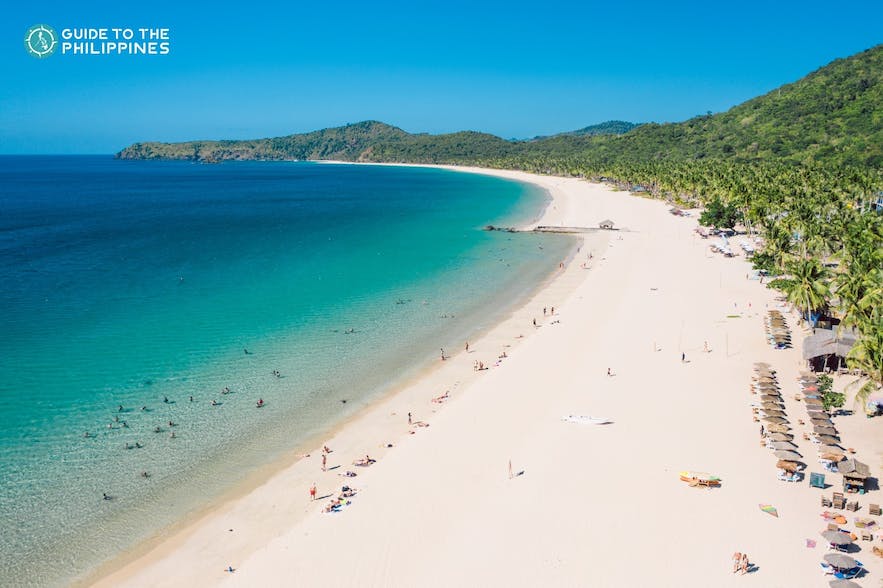 Nacpan Beach, located 17 KM north of the town of El Nido in Palawan, is a 4-km stretch of cream-colored sand, coconut palms, and aquamarine waters. Nacpan is one of two prominent twin beaches in the area, the other being Calitang Beach.

Travelers can swim, sunbathe, or relax on the beach on this popular El Nido, Palawan tourist spot. Additionally, visitors may also attempt to surf, kayak, and stand up paddleboard. There are snorkels, masks, and fins provided for individuals who want to explore the beautiful waters of Nacpan.

Unwind and Relax in the Best Beaches of Palawan 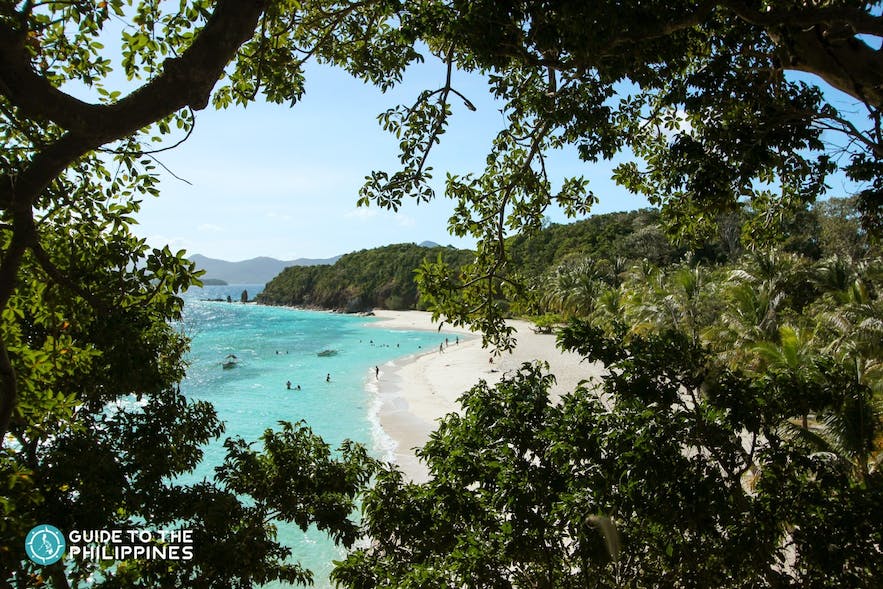