Marinduque is a heart-shaped island province in the Mimaropa region that nestles between Tayabas Bay and the Sibuyan Sea. It is situated at the heart of the Philippines and is considered the archipelago’s geographic center. During the Lenten season, the island gets a bit crowded for the annual Moriones Festival, one of the oldest religious festivals in the Philippines.

Home to idyllic beaches and caves, Marinduque has several must-visit sites that attract tourists during the Lenten season and the summer months. For those planning to visit this beautiful island paradise, we’ve listed below the best Marinduque tourist spots that you should visit when you book Marinduque tour packages.

Malbog Sulfur Spring is a natural hot spring at the foot of a volcano known as Mount Malindig. It is a stratovolcano in the Buenavista town with an elevation of 1,157 meters above sea level.

Malbog Sulfur Spring nestles within lush greenery surrounded by verdant flora and fauna. Its warm and bluish-white sulfuric water is believed to have therapeutic and healing benefits. The spring has two swimming pools, and both have medicinal properties that can cure skin diseases.

The stream directly comes from the mountain and goes down into a spring pool where tourists can have a rejuvenating dip. Its water is safe to drink and is even believed to cure acute and chronic cases of skin ailments. Some tourists even bring bottles of sulfuric water on their way home. 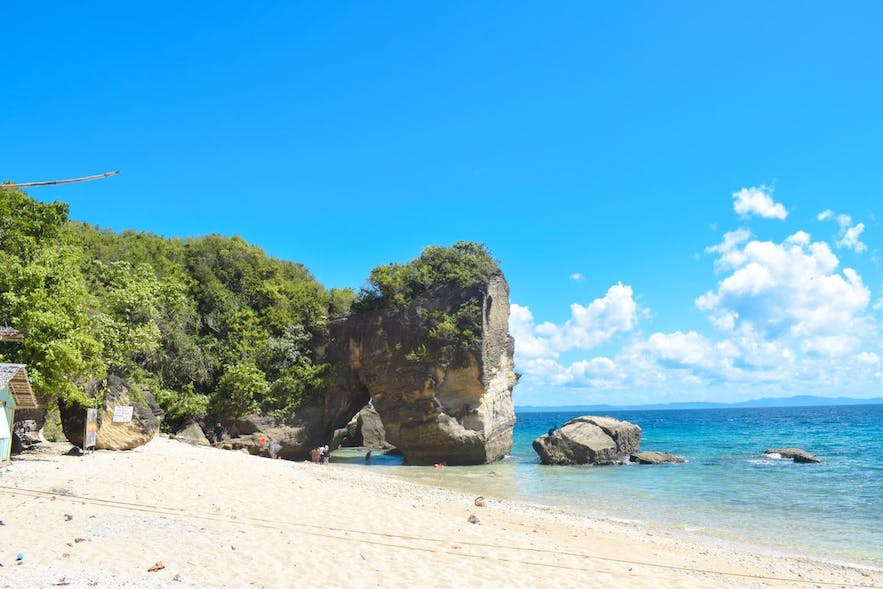 Off the northeastern coast of Marinduque is Mongpong Island, a charming islet with striking rock formations and a pristine white-sand beach. It has clear blue waters where you can see through colorful reef fishes underwater.

Upon arrival on the island, the Ungab Rock Formation is the first thing that will pique your interest. The huge colossal rock sits on the island’s turquoise waters and white sand. Carved out of the base rock is a triangular hole that forms a land bridge connecting you to the other side of the beach.

The giant boulder is a sight to behold and a perfect backdrop for your selfies and group photos. Plus, the water underneath the rock arch is shallow, making it a safe spot to swim for kids. The white sand is also a mixture of smooth pebbles and coral fragments.

While Marinduque is famous for its scenic beaches, there is one enchanting waterfall that stands out from the rest of the Mogpog Marinduque tourist spots, the Paadjao Falls. Situated in Mogpog municipality, the Paadjao Falls is accessible via a 10-minute trek from the highway, which is only 5.5KM away.

The hidden cascade gently flows from a 15-feet tall rocky cliff down to a 6-feet deep basin with cold and jade-green waters. It majestically nestles underneath the cool shade of verdant greenery and tall trees, making you feel a lot closer to nature. Surrounding the falls are huge and edgy rocks, so be extra careful when crossing the river and falls.

Paadjao Falls is connected to the Mogpog River downstream. It is also an ideal picnic spot where guests can put up tents for camping. Aside from Paadjao Falls, there are other underrated waterfalls in Marinduque such as Norada Falls, Kawa Kawa Falls, and Bulusukan Falls. 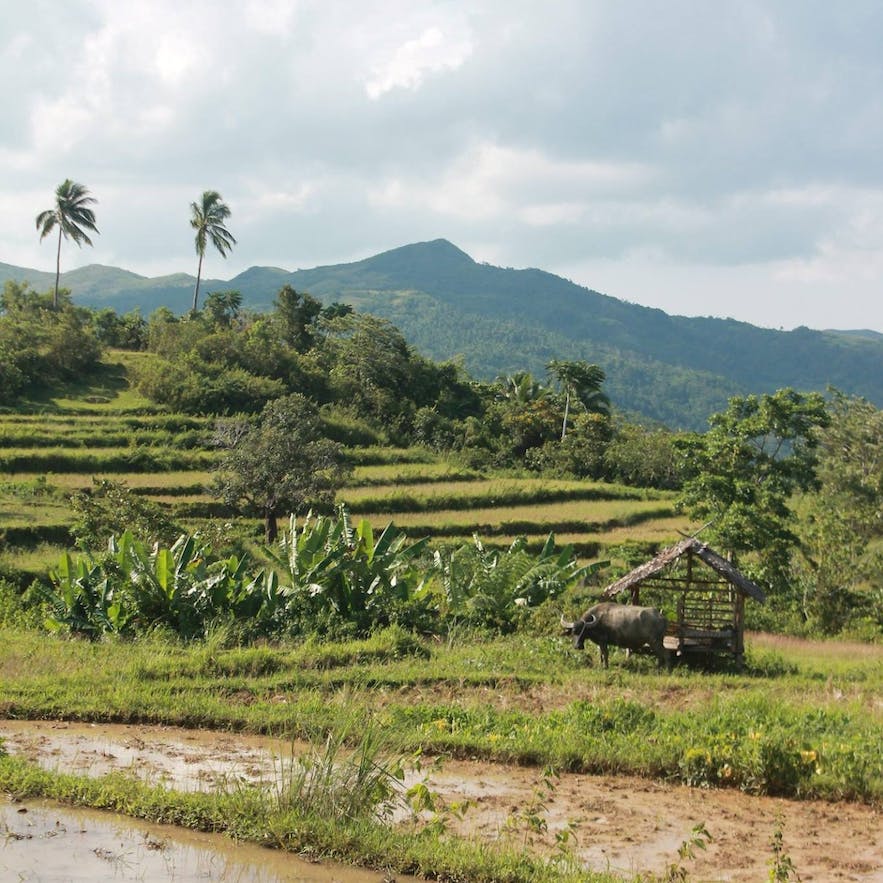 Up next is a piece of greenery that occupies nearly 9,000 hectares of land, the Marinduque Wildlife Sanctuary. It is home to several bird species such as the Zebra Dove, Serpent Eagle, Brahminy Kite, and Philippine Scops Owl. Adding to the lush green landscape are native trees such as Ipil, Narra, Yakal, and Molave.

Inside the wildlife sanctuary are caves that serve as a habitat for rare species, like the cave-dwelling freshwater shrimp. Some wild animals inhabiting the protected land are the Philippine warty pig, the Philippine deer, the cloud rat, and the green racket tail.

Built as a fortress in 1792, the Boac Cathedral became a relevant part of the Marinduqueños colorful history and culture since its construction in the Spanish era. The locals used it as a hiding place during a Moro attack in the 1800s. Consequently, it also served as the venue of the blessing of the Philippine Revolutionary flag in 1899.

Upon entering the church, you will see beautifully carved doors and exterior walls that are made of red bricks. Inspired by Hispanic Gothic architecture, the cathedral’s interior and ceiling showcase simple yet intricate carvings. Because of its cultural and historical significance, it is considered one of the must-see Boac Marinduque spots.

The cathedral’s grand facade and bell tower are composed of adobe stones and rough terra cotta. There are also massive buttresses that resemble the UNESCO World Heritage Site of Paoay Church in Ilocos. 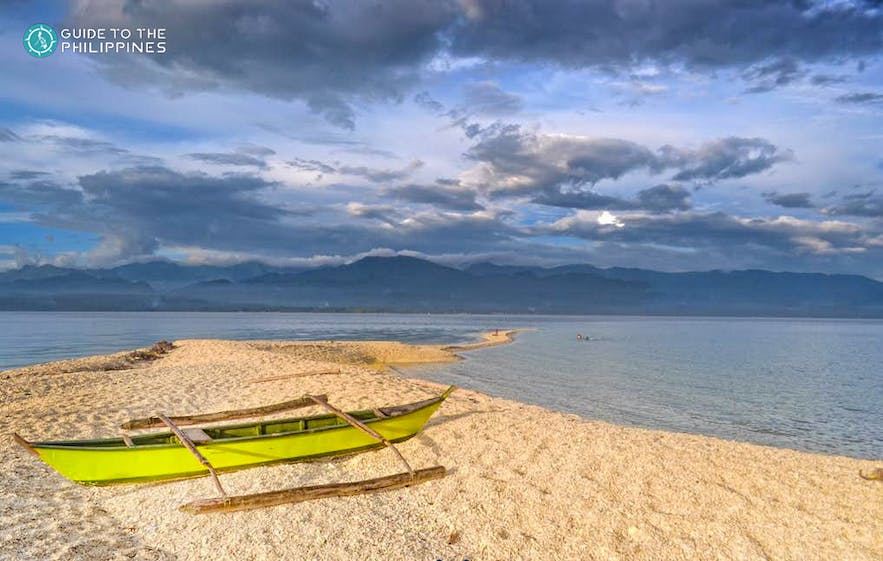 Another postcard-worthy spot in Marinduque, the Treys Reyes Islands, is nestled off the coast of Gasan municipality. The jump-off point is at Gasan port where tour boats await passengers before heading to the neighboring Three Kings islets, namely Melchor, Gaspar, and Baltazar.

The largest among the three is Gaspar Island, a tranquil paradise with crystal clear waters and fine white sand. Next is Melchor Island, featuring rock formations covered in lush vegetation. Lastly, the Baltazar Island offers a lovely haven for those seeking a secluded spot to laze on the sand and lounge in beach cabanas.

Among the must-see spots on Baltazar Island is a hilltop lighthouse, which was built during the American colonial period in 1910. Before capping off your island escapade, don’t forget to see the unique rock formations at Kulapnit Cave. Then, drop by the Kay Bungo Cave, a historical site where elongated skulls were found. 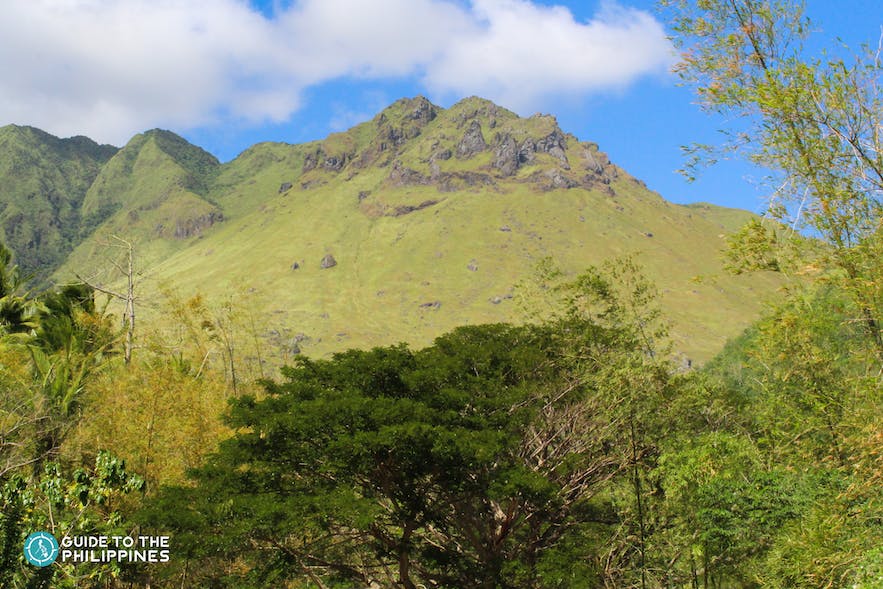 Majestically standing on an elevation of 1,157 meters above sea level, Mount Malindig is a must-visit Buenavista Marinduque tourist spot and is considered the highest peak in the province. It is a stratovolcano situated at the island’s southern tip and west side of the Bondoc Peninsula on Luzon Island.

Because of its vast landscape and thriving ecosystem, Mount Malindig is comparable to Mt. Banahaw and Mt. Makiling in Quezon and Laguna provinces of Southern Luzon. At the base of Mount Malindig lies a therapeutic sulfuric spring called the Malbog Sulfur Spring. Many locals and tourists flock here to experience the healing powers of the spring.

Mount Malindig is a hike-friendly destination for mountaineers. Based on the Pinoy Mountaineer rating system, it has a difficulty level of 4, which requires a minor climb. Having a trail classification level 1 and 2, Mount Malinig has a well-established trail with somewhat rugged and steep paths. 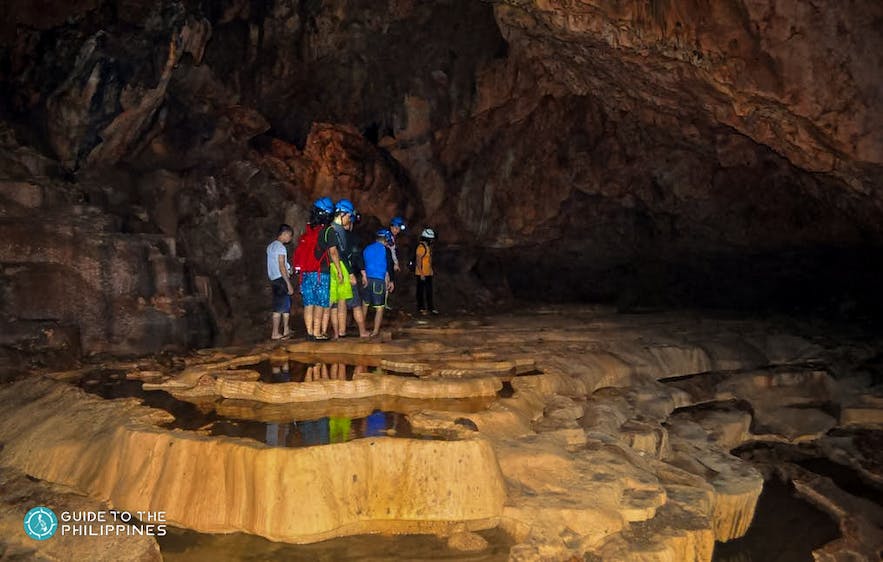 For those who like to experience spelunking in the Philippines, you can check out one of Marinduque’s subterranean wonders, the Bagumbungan Cave. It is often compared to Sumaguing Cave in Sagada because of its stalactites and stalagmites in impressive shapes and forms. Bagumbungan Cave is a great spelunking spot that features magnificent rock formations.

The jump-off point is at the Santa Cruz town where the cave is located. At the cave’s entrance, there is a pathway leading down the waist-deep underground river basin. To get there, you have to pass through slippery surfaces and narrow passages. The path gets a bit more challenging as you slide down the muddy paths and squeeze yourself between huge rocks.

Bagumbungan Cave is 1.9KM long and has a beginner-friendly trail, ideal for those who are new to spelunking. Some parts of the cave are off-limits for tourists. It remains largely unexplored, making it a wonderland for adventure seekers out there. 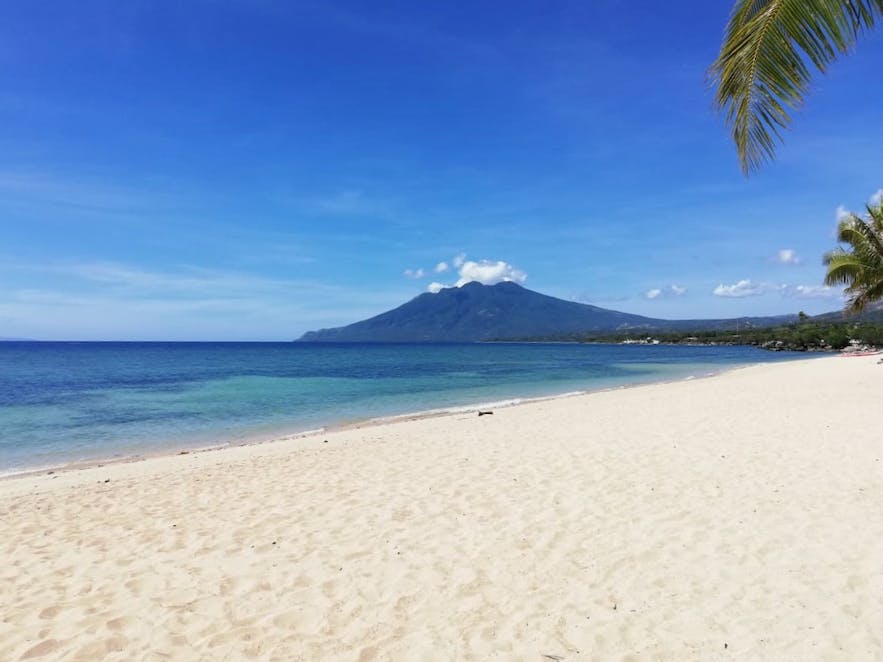 Among the well-known attractions in Marinduque is the Poctoy White Beach, a long stretch of fine white sand lined with palm trees in the coastal municipality of Torrijos. Surrounding the powdery beach are crystal clear waters that are ideal for swimming and kayaking. There are beachfront huts and cottages with chairs and tables, perfect for spending laidback afternoons on the beach.

Underneath the crystalline waters is a sight to behold for scuba divers. The Poctoy Underwater Museum showcases giant Moryon monuments, which symbolize Marinduqueños iconic Moriones festival that happens every Holy Week.

Aside from being one of the idyllic beaches in Marinduque, Poctoy White Beach remains to be among the emerging Torrijos Marinduque tourist spots. It attracts many local and international travelers annually because of its pristine shores and panoramic sunset views glowing over the horizon.

Among all the famed destinations in Marinduque, Maniwaya Island should be on top of your bucket list. It is one of the several islands in Marinduque dotting Santa Cruz town that can rival famous white-sand beaches in the Philippines. Along the shoreline, you can find budget-friendly resorts and glamping cottages that resemble those in Bali, Indonesia.

Off the northern coast of the island is Palad Sandbar, a patch of white sand that unravels and seemingly invites you to dip into the surrounding crystal blue waters. The best time to visit the sandbar is in the morning, as the whole strip of white sand appears during low tide.

The stunning backdrop of the palm-fringed shores and turquoise-colored waters is perfect for taking Instagrammable selfies and group photos. To cap off your trip, don’t miss out on the chance to witness the best view of the sunset on Maniwaya Island. 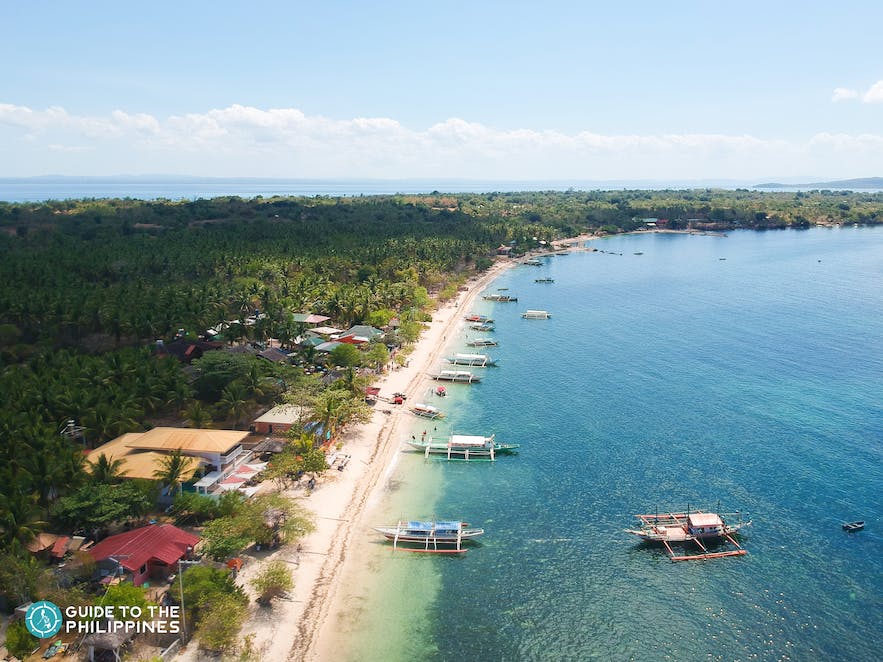 Every year, Marinduque continues to attract travelers into discovering its natural gems and hidden wonders. With the emerging tourism industry in the island province, there’s just more to Marinduque than what meets the eye.

Beyond its fascinating tourist spots, Marinduque showcases a rich cultural and historical heritage. And while travelers are in awe of the island’s tranquil and rustic charm, locals take pride in their especially curated Marinduque delicacies such as miki noodles, crispy pata, and uraro cookies.