Palawan is one of the top destinations in the Philippines. It is known for its stunning white sand beaches with clear blue waters, secret lagoons, and abundant marine life. Shipwreck sites and rock formations around Palawan islands also make the island province a go-to place for travelers looking for exciting outdoor activities.

Palawan, the country's biggest province, is home to top travel hotspots like Puerto Princesa, El Nido, Coron, San Vicente, and Port Barton. These destinations have a lot of tourist attractions, so planning your itinerary to Palawan might be challenging.

Plan your itinerary to this top Philippine destination with this guide for the top 10 Palawan tours and activities: 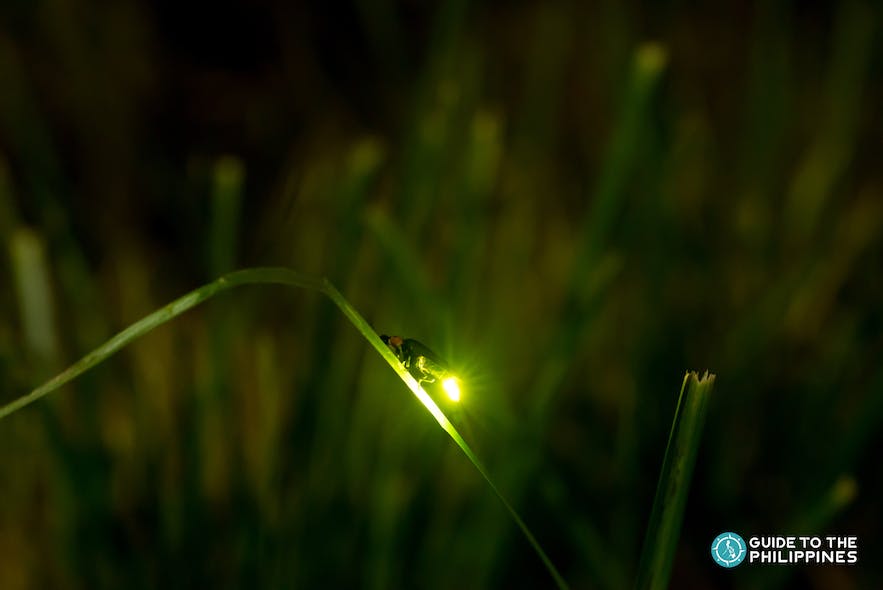 Iwahig Firefly Watching is an eco-tour where you can see these flickering insects up close in their natural habitat. Also called lightning bugs, fireflies are an incredible sight, as their trails create the illusion of lightning raining down from their tree and mangrove habitats that line the banks of the Sicsican and Iwahig Rivers.

About 17 KM from the city of Puerto Princesa, the watching site opens at 6 in the evening when fireflies are visible. The locals of Barangay Iwahig rehabilitates the area as a sustainable tourism initiative.

During the tour, flash photography is not allowed because lightning bugs are easily stressed and can be pretty sensitive to noise and unnecessary stimuli. So, it would be best to keep your mobile phones and cameras with flash photography in their cases during the tour. This will also allow you to focus on watching the fireflies and enjoy every moment of the experience. 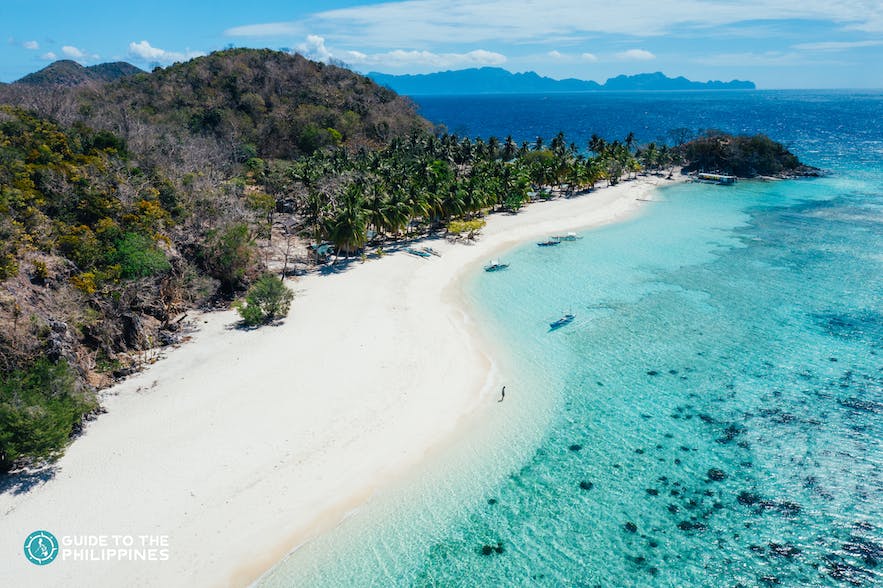 Culion Island has a restful vibe where you can have some peace. The town of Culion is part of Palawan's Calamian Group of Islands. It was the former site of the world's largest leprosarium in the 1900s until the colony was declared leprosy-free in 2006.

This tour gives you a first-hand experience of how Culion went from an isolated island to a heritage site featuring Spanish settlement remnants. Today, you'll find the old nursery for children, a dormitory for males, a sanitorium, plazas, and other landmarks in Culion.

One of the attractions in Culion Island is Aguila's viewpoint, which will give you a stunning panoramic view of the island. You have to climb 333 steps to get there.

You’ll also find beaches with powdery white sand in Culion Island. You can join island-hopping tours in Culion to explore the waters of Ditaytayan Island, Malcapuya Island, and Waling-Waling Island. 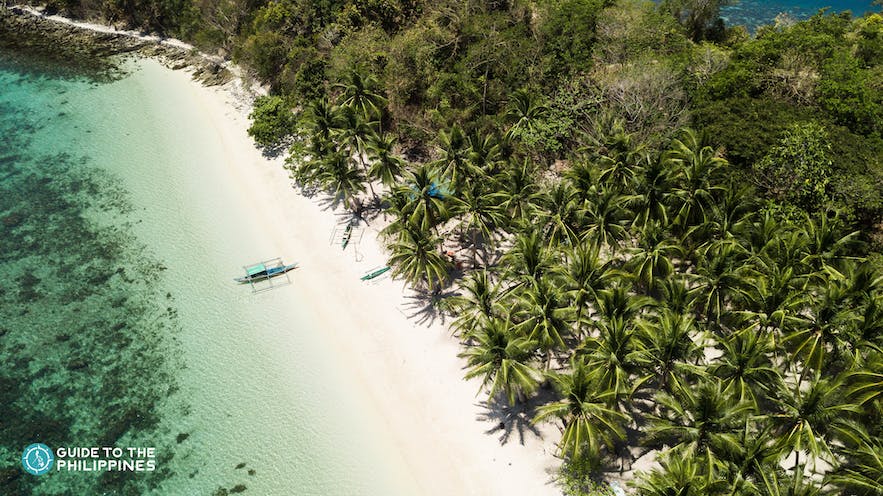 Port Barton is a small coastal town in Palawan. Island hopping and lounging in beaches are the top activities here.

Port Barton allows easy access and enjoyment of nearby islands, namely Starfish Island, Exotic Island, and Inaladelan Island. There's also German Island, a private island beach where you can swim with adorable sea turtles or sleep your cares away lying down on hammocks.

Besides island hopping, divers can also explore the Aquarium Reef, which showcases emerald waters. The diversity of tropical fishes and coral plateaus in this marine attraction will impress the nature lover within you.

Meanwhile, the Marine Sanctuary features the Black Coral, which looks like sycamore trees. The sanctuary is also home to Manta Rays. See them glide and loom over schools of fish of various sizes. 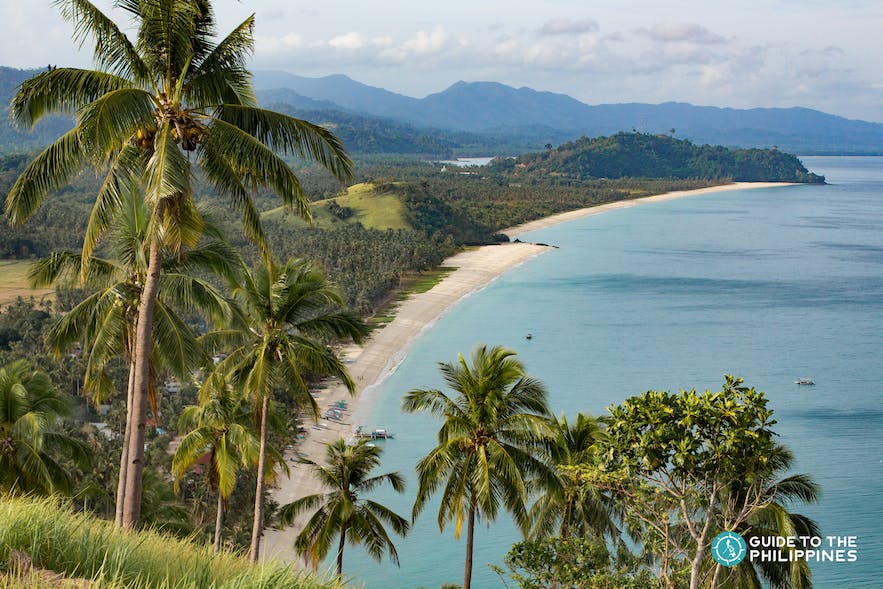 Long Beach in San Vicente is the Philippines's longest-spanning white beach and the second-longest in Southeast Asia with its 14-kilometer coastline. That's about thrice as long as Boracay's White Beach.

If seclusion is what you need, you can get as far away as possible from the crowd by staying in Long Beach. Resorts range from budget to luxury accommodations on the beachfront and nearby areas, so you feel close to nature while soothing your spirit.

Rent a motorbike to explore Long Beach and other in-land attractions in San Vicente. There are also restaurants offering seafood and international cuisine in Long Beach. If you love sunset views, you can dine at any of these restaurants in time for the sunset. 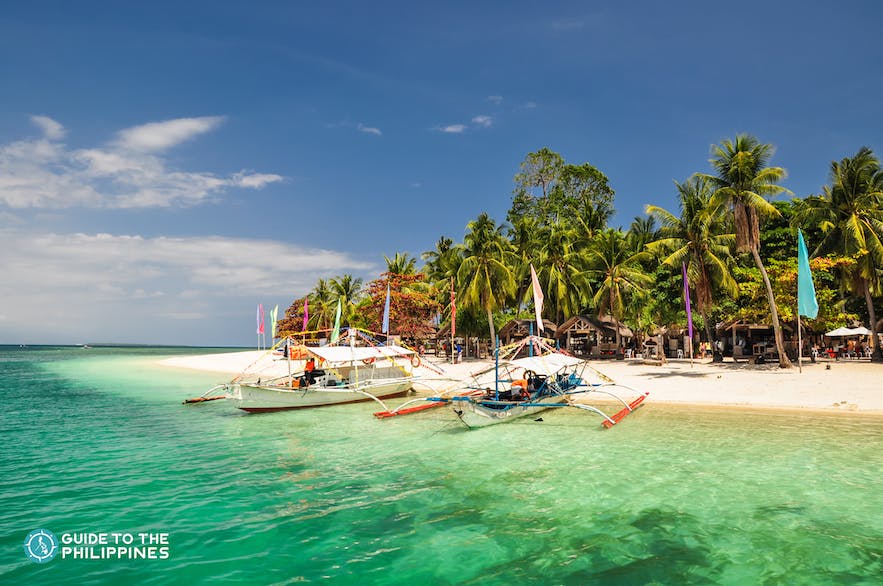 Honda Bay is one of Puerto Princesa’s most-visited attractions. In Spanish, "Honda" means a bay having an above-average depth, which would tell you that it enjoys a wide variety of plant and animal species. The name of the bay and what it implies makes it unique indeed. No wonder Honday Bay is a well-known attraction for island-hopping tours.

Honda Bay is accessible from Puerto Princesa at a distance of 25 km. The bay has four unique islands you can lounge in:

Starfish Island is named after the orange-colored, five-armed starfish. This island is perhaps the busiest snorkeling site in Palawan, with diversity so rich you can see colorful starfishes of different sizes so close to the shoreline.

Pandan Island is mainly accessible to spectators during day tours. Privacy is one of the nicest things you can have in this private island resort boasting white sand beaches.

Cowrie Island is suitable for water sport activities, like banana boat riding, jet-skiing, and snorkeling. While waiting for your turn, you can have a few beers or margaritas al fresco style in its numerous bars, restaurants, and cabanas.

Luli Island is considered a mystical island because it magically surfaces during low tide and disappears in the coming of the high tide as if inviting you to hunt for the bequeathed treasures lying in wait underneath its shores. Swim in its cool waters or lounge on the beach. 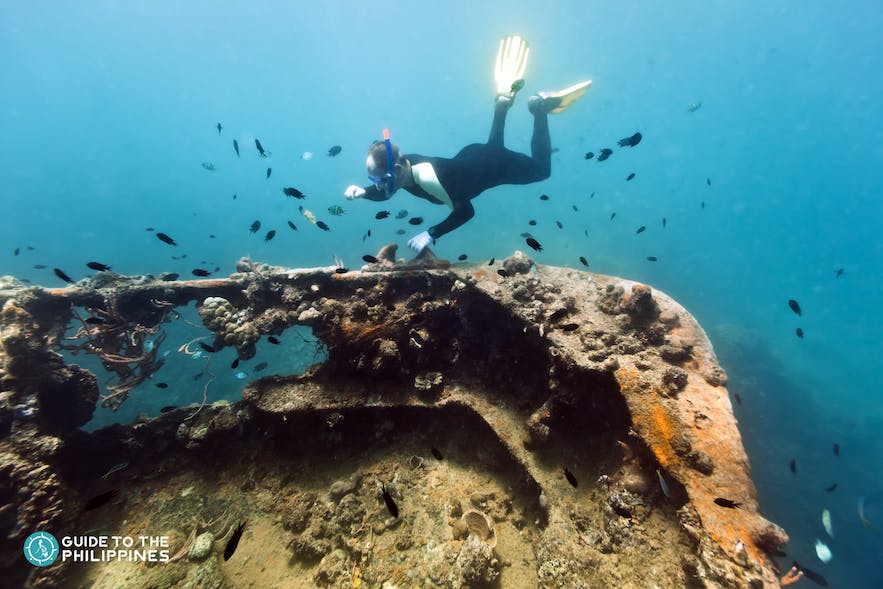 Coron is one of the top diving sites in the Philippines. Here, you can find 13 World War II Japanese shipwrecks between the waters of Culion and Busuanga, giving the diving sites an aura of mystery and adventure.

Coron's shipwrecks have been marooned in their place for such a long time that corals have established colonies in them, as well as various kinds of fishes, sea turtles, and nudibranchs.

Among the diving sites in Coron, the Skeleton Wreck is viewable from the water surface. The Lusong Gunboat is just 11 meters off the Lusong Island coast and perfect for snorkelers, with its keel visible at low tide. Tangat Wreck is also like the Lusong Gunboat in terms of its near-surface view.

Shipwreck diving in Coron is possible for all types of divers, whether you are a beginner, an expert, wrecks, or an occasional snorkeler type of tourist. There are wrecks a hundred feet below sea level for the veteran divers, while some are only between 10 feet and 30 feet in depth. 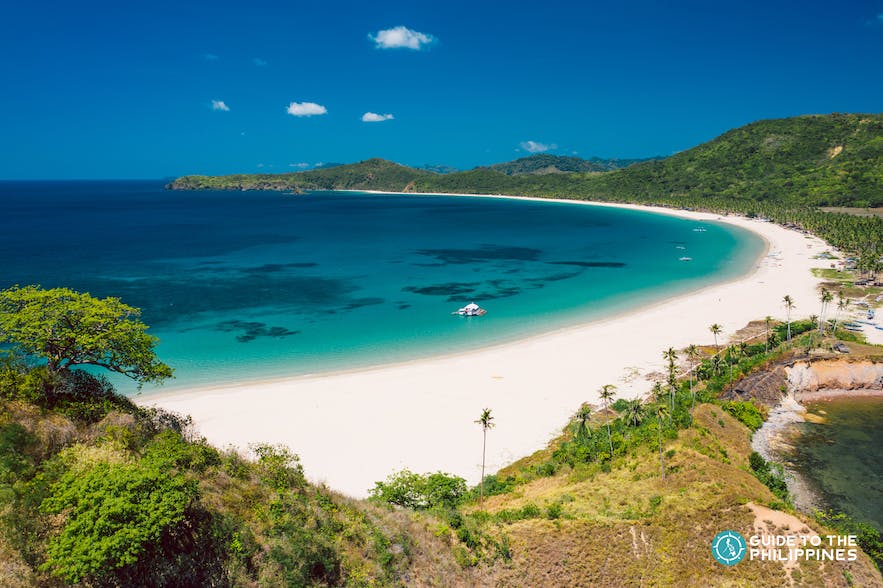 The 4-kilometer Nacpan Beach in El Nido is one of the top beaches in Palawan and the Philippines. Surrounded by verdant hills, you’ll feel the urge to settle in hammocks that you’ll find at the foot of these hills.

There are also numerous coconut groves where you can take shade from the sweltering heat of the sun, especially at noontime. Surfing, kayaking, and paddle boarding activities await you in this beach tour.

Calitang Beach, its adjacent beach, is accessible via a tricycle ride along a scenic route, where you'll see spectacular views. Food shacks and high-end restaurants are aplenty in the Calitang area in case the ride works up your appetite. 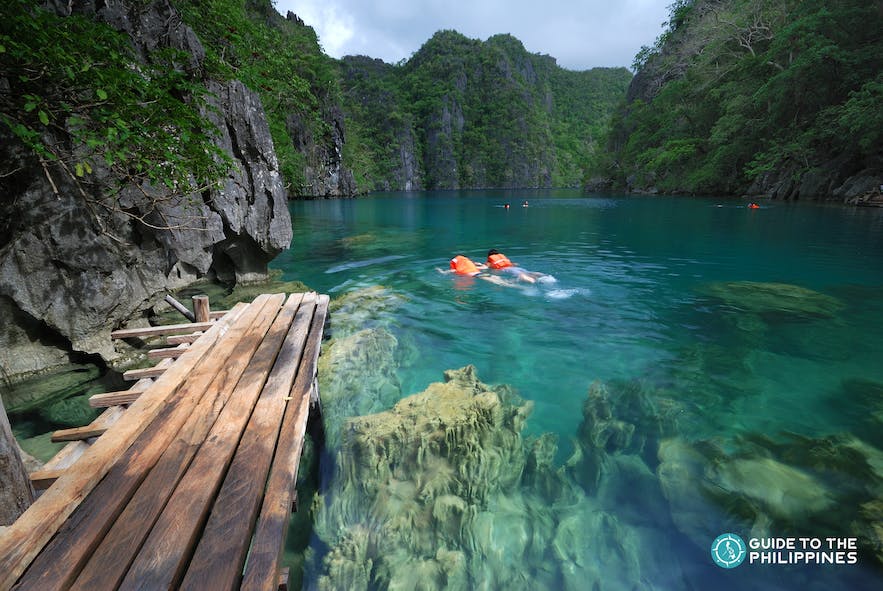 Because of its laid-back vibe, Coron Island is one of the top destinations among Palawan tour packages. From lakes to lagoons and beaches, the island is definitely for fun-loving water adventurers.

One of the top activities in Coron is island hopping. You'll be riding an outrigger boat to reach islands and beaches.

Among these is Kayangan Lake, which holds the distinction as the cleanest lake in the Philippines. One of the most photographed spots in the island, Kayangan Lake also has a trail leading to a high-altitude view of Coron Bay, making it the perfect site to take photographs to bring home with you.

Another top attraction is Twin Lagoon, a body of water created by inlets from the sea and framed by towering limestone rock formations. Another island hopping spot is Siete Pecados, a snorkeling site where you can view corals lying on the marine sanctuary. You can also visit Banol Beach and CYC Beach, where you can lounge on its white sand shore. 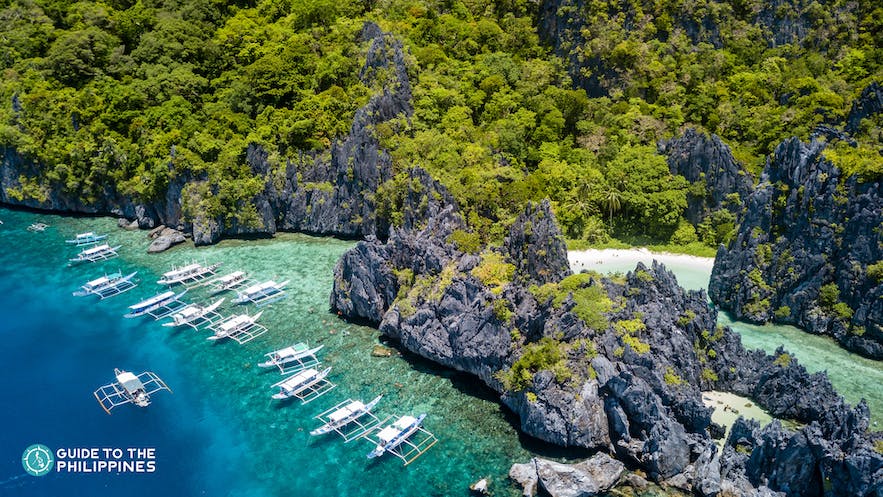 El Nido is one of the most famous island destinations of local and foreign tourists, boasting the most beautiful beach resorts, majestic cliffs, and abundant marine life. There are numerous hostels, inns, and luxury villas that you can rent during your adventures in El Nido.

Island hopping is one of the top activities in El Nido, which is home to 45 unspoiled islands and islets. El Nido’s must-visit sites include the Big Lagoon and Small Lagoon. You’ll see towering rock formations and cliffs as you enter the lagoons, which offer calm, clear waters where you can swim or kayak. Another lagoon, the Secret Lagoon, is more secluded and teems with coral reefs.

Other popular attractions in El Nido are the stunning Seven Commandos Beach and the Snake Island, famous for its 3-kilometer, S-shaped sandbar.

El Nido island hopping tours used to be classified as Tour A, B, C, and D, but now travelers will have to use the 7 Wonders of El Nido booking system. Safety has been incorporated into these tours, with each attraction allowing a limited number of guests. 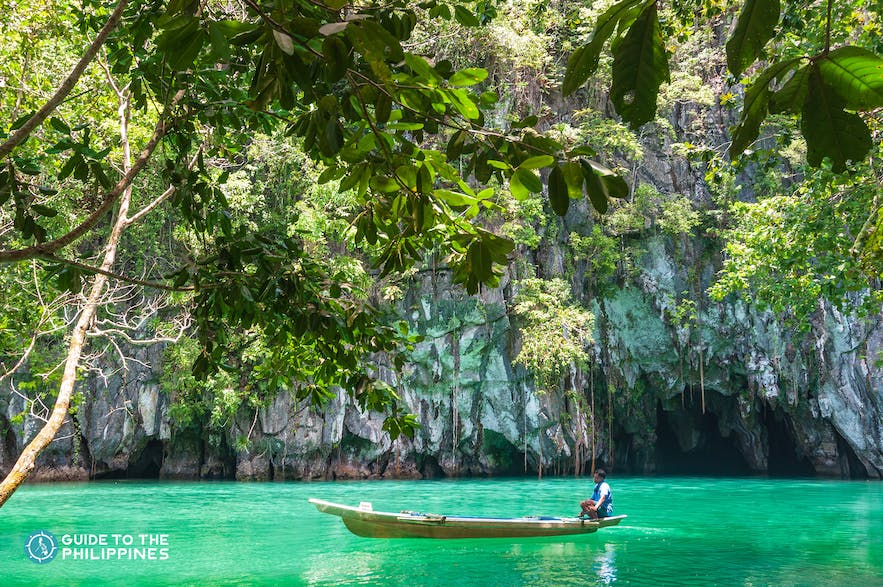 No trip to Palawan is complete without a tour of Puerto Princesa's Underground River, considered the world's second-longest subterranean river at 8.2 km long. The river also has the distinction of being in the list of the UNESCO World Heritage Sites and part of the New 7 Wonders of the World.

The Underground River tour involves riding a paddle boat that will take you to the river's entrance. From there, you’ll be boarding a smaller boat to cruise along a 4.3-km portion of the river, which will give you a view of the river’s pristine waters, stunning limestone cliffs, and magnificent cave formations.

Inside the caves, you’ll see interesting stalactite and stalagmite rock formations, as well as birds, bats, and reptiles that live in the cave. Occasionally, you’ll see fishes and crabs within the river system, too.

You’ll need to pre-book your tour and secure a permit from Puerto Princesa's Underground River Booking Office. This requirement is part of the efforts to keep the river’s environmental sustainability.

With so many places to visit, you may find yourself rushing from one itinerary to the next to make sure you can cover everything. You may also miss some of the province’s underrated tourist spots if you’re not familiar with a particular area.

Fortunately, the list of sites and activities in this guide can help make your Palawan tours as organized, complete, and enjoyable as you want.

You’ll never run out of places to see and things to do in Palawan. Whether you enjoy heritage and eco-tours or island hopping, you can experience them with Palawan tours.