Baguio, located in the province of Benguet in Northern Luzon, is a mountain resort city which serves as the economic center of the entire Cordillera region. The city’s cold climate, owing to an elevation of about 1,500 meters above sea level, has made it a popular tourist destination especially for people coming from Manila and other big cities wanting to escape the intense summer heat and humidity, earning its name as the “Summer Capital of the Philippines.”

Baguio is also famous for its public parks, hills, and forests lined with towering pine trees, which is why it is also regarded as the “City of Pines” in the country. It was originally a hill station during the American Colonial Period, with landmarks and buildings named after American architects and governor-generals such as the Burnham Park, Wright Park, and Camp John Hay.

Activities such as horseback riding, lake boating, and other park adventure rides are popular among families, while the city’s iconic restaurants, dessert houses, coffee shops, and nearby strawberry farms are always on the list for foodie visitors. Drive along winding roads with panoramic views, visit many of the city’s flower gardens and art museums, and cozy up in cabin-type accommodations — there is no shortage of options for sightseeing and relaxing when in Baguio City.

The city has also become a point of congregation for many indigenous tribes and villagers from the neighboring towns and mountain provinces, so expect traditional weaves, handicrafts, and costumes either worn, showcased, or sold in Baguio’s souvenir shops and street side stalls. Add to these some of the freshest and most bountiful vegetable harvests grown in the highlands and sold in the city’s markets.

Although Baguio’s weather varies throughout the year, visitors can always expect colder temperatures compared to anywhere else in the Philippines all year round. It also features many options for both indoor and outdoor activities making it a great destination to visit anytime of the year.

As with the rest of the Philippines, the low season for travel in Baguio is during the rainy months starting June until November. Expect tourist crowds and hotel prices to drop during these times.

Baguio experiences both dry and wet seasons, but the climate will always be colder than most Philippine destinations, with average temperatures ranging from 15 to 23°C. Dry season is from January to May, while the rainy season is from June to December, with July and August seeing the most amount of rainfall.

Local visitors mostly troop to Baguio City during the summer months of March, April, and May to retreat from the sweltering heat. Although December is one of the coldest months in the city, it sees a pack of tourists to celebrate the holidays in many of its iconic mountain resorts. Given its close proximity to Manila, expect huge crowds during weekends, holidays, and Holy Week in Baguio as well.

February is also a peak time for Baguio as it celebrates the Panagbenga Festival, in celebration of bountiful flower harvests. Huge floats smothered in vibrant flowers in all shapes and sizes parade around the city, as well as street dance competitions and performances by locals wearing flower-inspired costumes.

When to avoid visiting Baguio

If you wish to avoid bumping into so many tourists and congested traffic (Baguio’s roads are narrow), avoid visiting Baguio during the peak times mentioned above. July to October are also the wettest months, and may put a damper on your plans for exploring many of the city’s sights.

How to get to Baguio

Despite its mountainous location, Baguio has become easily accessible, thanks to the many bus companies and tour operators that have organized trips to the city. Manila is the best jumpoff point, where terminals with bus lines going to Baguio are all over the city.

From Pasay City, take the Joy Bus of Genesis Transport or Victory, both having premier and deluxe-class bus lines going to Baguio and with many trip schedules throughout the day.

If you are coming from the northern side of Manila, head to Cubao in Quezon City which is home to many bus terminals. Victory Liner, Genesis Joy Bus, and Partas have trips to Baguio coming from here.

Genesis Joy BUs and Philippine Rabbit Bus Lines depart from the Avenida Terminal in Manila going to Baguio, while Victory Liner has Bagiuo-bound regular air-conditioned buses from its Sampaloc Terminal.

Coming from the southern part of Manila, head to the Parañaque Integrated Terminal Exchange (PITX) and board a Solid North Transit point-to-point (P2P) bus to Baguio, the first of its kind from Manila. These P2P buses have toilets on board and have no stop-overs, making the trip to Baguio faster and more convenient.

If you are coming the Clark International Airport in Pampanga, take a shuttle service to Dau Terminal and ride a bus to Baguio City.

Driving to Baguio using a private car is also a great way to visit Baguio, with convenient routes such as the Tarlac–Pangasinan–La Union Expressway (TPLEX), and North Luzon Expressway and Subic Clark Tarlac Expressway (NLEX-SCTEX) available. Alternatively, you may join a shared or organized tour to Baguio for a hassle-free two-way transport to Baguio City.

Baguio is also accessible via flights from Cebu starting December 16, 2022. Board a Cebu to Baguio flight from Mactan-Cebu International Airport going to Loakan Airport in Baguio.

Baguio is a generally safe destination to visit and explore, with very low to moderate crime rates within the city. The people in Baguio also seem to be very cool-headed, friendly, relaxed, probably owing to the chill temperatures and laid back lifestyle.

However, beware of possible pickpocketing especially in the crowded areas of Baguio such as terminals, markets, and famous tourist spots. Visitors are always encouraged to be mindful of their belongings, and to stay away from unfamiliar neighborhoods. 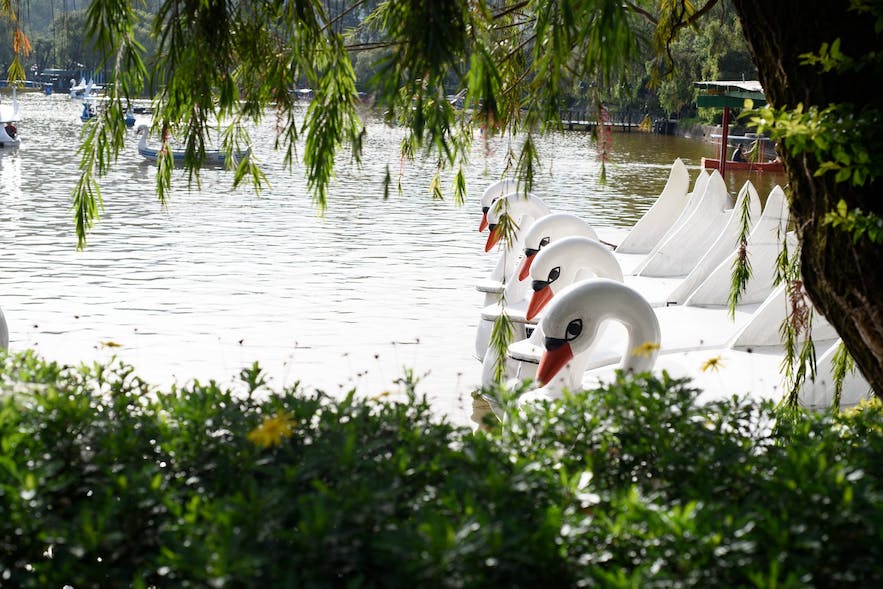 There are many transport options available in Baguio City, and most of the routes pass through the city’s most popular attractions making it easy for visitors to explore and go sightseeing. Options include Grab Taxi, regular taxi, and jeepneys, with the latter being the most accessible and affordable choice.

Jeepneys in Baguio, as with the rest of the Philippines, have specific routes and stops, and it is important to look at the sign boards or ask locals which one to take depending on where you want to go.

Ride a jeepney with a Mines View sign board if you wish to visit Mines View Park, The Mansion, Wright Park, and Good Shepherd. This line departs from the Bakakeng Terminal along Session Road, near Burnham Park. In the same terminal you will find jeepneys taking the Scout Barrio Route, which takes you to the famous Camp John Hay.

If you wish to check out Baguio Botanical Garden, head to the Pacdal-Liteng Terminal in Lakandula Street, near Session Road, and ride the jeepney with a Pacdal sign board. For a trip to the BenCab Museum, ride a jeepney with signage indicating Asin Road departing from the Guisad Jeepney Terminal near Baguio Public Market.

For a more comfortable and faster ride, especially for first-time visitors in Baguio, book a taxi through the Grab Taxi app. Regular taxis also ply along Baguio’s major roads including Session Road, Harrison Road, and Marcos Highway. Cab drivers in Baguio have a reputation for being honest and will always give you the exact change. 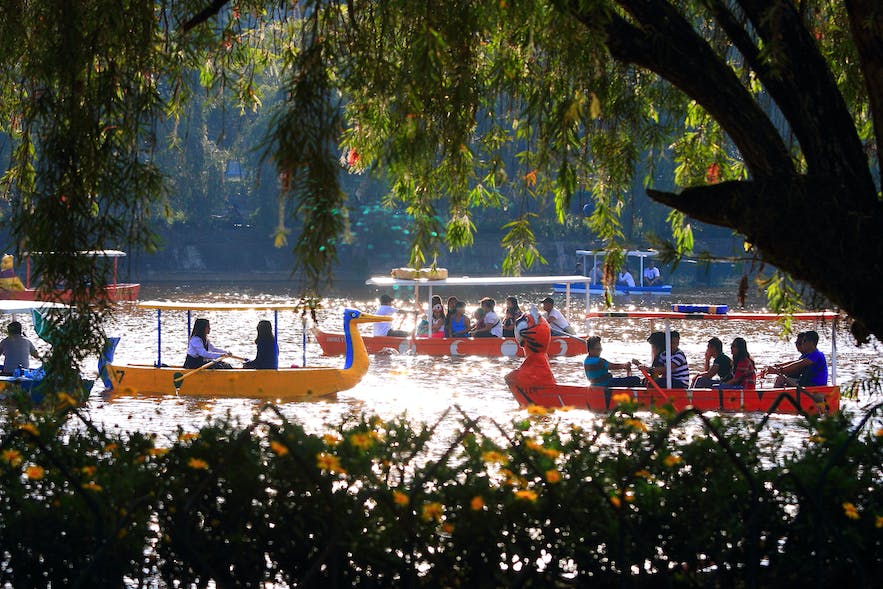 Baguio is dotted by many dining and drinking establishments, almost giving every visitor unlimited options. Head to Session Road, arguably the center of Baguio and where a lot of local action happens, as it is lined up with some of the city’s best restaurants including Good Taste, Vizco’z, and Cafe by the Ruins. It also runs adjacent to Harrison Road, where the famous Baguio Night Market is located that features many food stalls for local fare and street food.

Baguio also comes alive at night, with many pubs and bars open for visitors to get a tipple or two. Baguio Craft Brewery offers over 20 different types of fine crafted beers, while Rumours is a staple establishment for locals and students for affordable local beers and cocktail mixes. Cowboy’s Paradise is where you should be headed for nightly live bands and country music.

As with the rest of the Philippines, tipping is not mandatory in Baguio. However, gratuities are always appreciated especially by service staff and locals.

Best Neighborhoods to Stay in Baguio

Top attractions and sights are scattered throughout Baguio, but most of them can be explored in one day as they are easy to access. Stay in Session Road for quick access to Baguio Cathedral, Burnham Park, and the public market. Mines View Park, Botanical Garden, and Wright Park are close to each other.

One cannot visit Baguio without checking out the Baguio Night Market at Harrison Road, famous for its “ukay-ukay” shops selling second-hand imported clothes, bags, and shoes for very low prices. A lot of people score vintage finds and branded items here, too!

Stay close to Session Road as this is where most restaurants and establishments are concentrated in Baguio City. Although other parts of the city have pubs and bars as well.

Does it fog in Baguio?

Yes, it does fog in certain parts of Baguio City, especially during the colder and wetter months. For those driving their own cars going to Baguio, make sure to always check weather updates and road conditions.

Can I take photos of local sights and people in Baguio?

Top tourist attractions can be freely enjoyed by visitors, and taking pictures around do not cost anything. However, if a local wearing a traditional Igorot or mountain tribe costume offers you to take a picture with them as a souvenir, expect to pay a small fee. If you do not wish to pay, politely turn down the offer. Always ask permission when taking pictures of the local people.