Camp John Hay is a renowned mountain retreat in Baguio City. Built about 5000 feet above sea level, averaging a moderate temperature of 19 degree Celsius. In addition to hotels, shopping and conference centers in the city, it is visited mainly because of its world-class Jack Nicklaus-designed golf course.

During the Philippine-American War in 1900, the US 48th Infantry unit, headed by Captain Robert Rudd, built the Hill Station in the same site where Camp John Hay now stands. The area was owned by a native named Mateo Cariño. The Americans constructed the Hill Station on the part of the pasture which the locals refer to as Kafagway meaning “a wide-open place”.

World War II then began in December 1941 when Japanese warplanes released 72 bombs over the Main Gate of Camp John Hay. From being an army reservation, the site became a funeral camp for Americans and other races who fought against the Japanese. It also turned into General Tomoyuki Yamashita’s headquarter.

The Japanese invasion came to its end when General Yamashita surrendered. Then in 1955, the Americans turned Camp John Hay into John Hay Air Base.

In 1991, the camp was officially turned over to the Philippine Government by the Americans. It was designated to what it is at present, a tourist attraction, human resource development hub, and forest watershed reservation.

Aside from joining a guided tour, the most feasible way to go to Camp John Hay is by riding a jeepney with the Scout Barrio route. Ask the driver to drop you off the gate to Camp John Hay.

Camp John Hay can be visited by guests all-year round from 6 AM to 7 PM. Take note that most facilities have different opening times so make sure to double-check before going to the camp.

What are some of the things to do in Camp John Hay?

Camp John Hay offers various activities for its visitors. One of those is the tree top adventure where tourists can try the canopy ride, zip line, and tree drop. The camp is also open for hiking trips where the trail ends at the Skywalk located 1000 feet above the ground.

What are some of the highlights and places to visit inside Camp John Hay?

The other places to visit here are the Butterfly Sanctuary, Bell Amphitheater, Bell House, Cemetery of Negativism, and History Trail among others.

There are also picnic spots in the site and a golf course for relaxation and recreation.

Is there an entrance fee at Camp John Hay?

There is no entrance fee to Camp John Hay itself, however you need to pay an admission fee in some of the attractions inside such as Bell House, Butterfly Sanctuary, and many more. 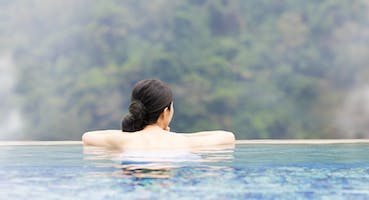